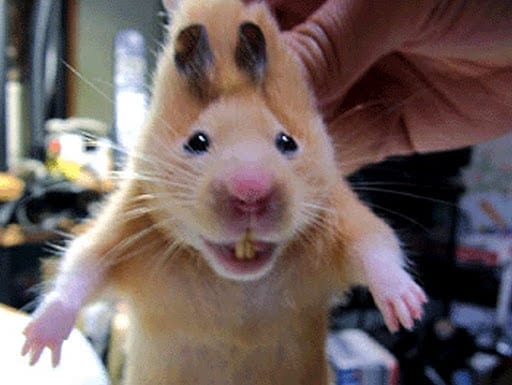 He sighed, frustrated. He had done this many times before, and yet the hamster acted like it was the first time this was happening to it. It was to be expected — after all, no creature likes to be manhandled like that.
But he was trying to turn this into an educational moment, and the hamster was making it really hard. All of a sudden he caught a glimpse of something he hadn’t seen before. When he realized what it was, he was glad the camera was rolling.

Most of us might think it’s too much hassle to deal with an unruly hamster, but not Tanken. He loves these little rodents. He has kept hamsters as pets for 25 years, and he speaks very highly of them.
“There is no other creature that gives more healing than a hamster,” he says on his YouTube channel, where he posts videos about his life with these rodents. But there is another reason he created this channel.

A Dearth Of Knowledge 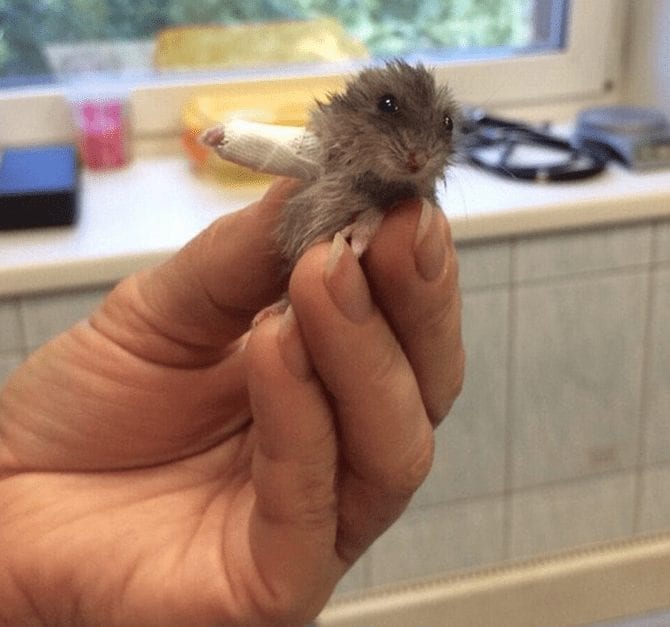 When he first started keeping hamsters, Tanken had a lot of questions about these little creatures. He wanted to know what food was best for them, how to keep them healthy, and what to do if they got sick or injured. Soon he realized there was not a lot of information out there about hamsters.
Veterinary doctors knew a lot about cats and dogs, but their familiarity with hamsters was limited. Tanken’s experience with these rodents became very much trial-and-error. But he wanted to share what he learned. 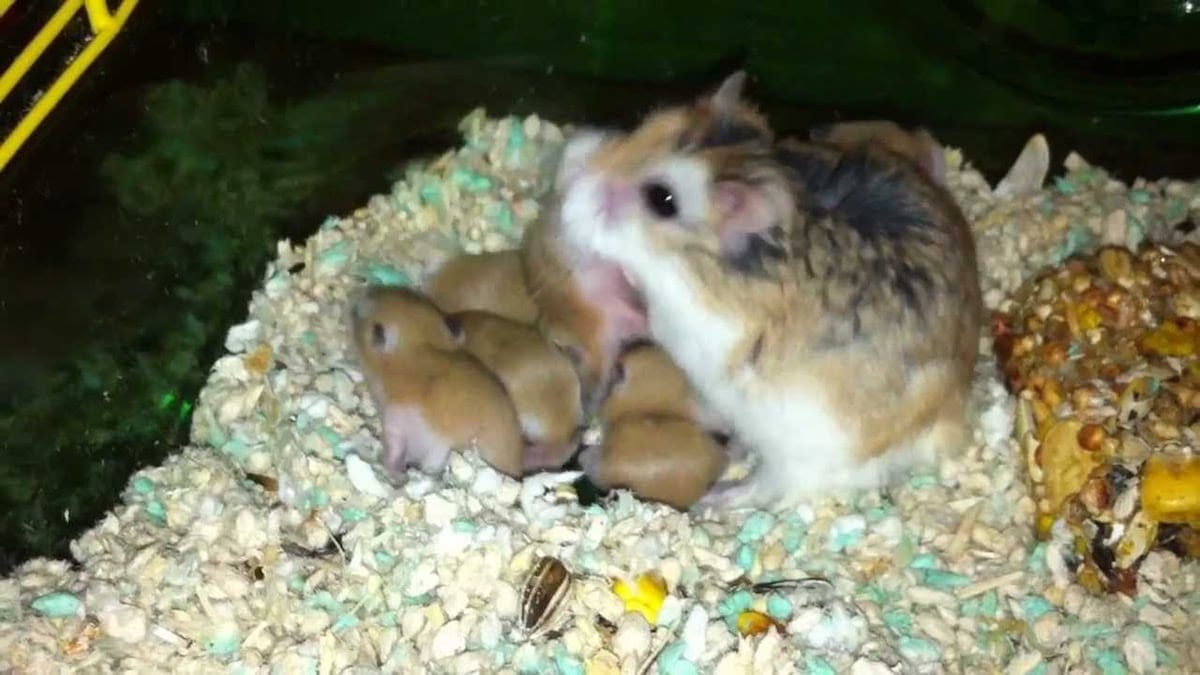 After keeping and breeding hamsters for a number of years, Tanken decided the knowledge he had gained was worth sharing. He realized there weren’t a lot of books or websites on hamster-rearing, so he created a YouTube channel. In it, he talks about everything from how to keep them clean to the healthiest food for young and old hamsters.
Though many people keep hamsters as pets, few people know they have needs completely different from those of cats and dogs. Dental care is one example.

Hamsters and other small animals like rabbits and chinchillas have teeth that never stop growing. This is because, in the wild, they primarily feed on food like nuts that are hard to crack open and wear down their teeth. For domesticated hamsters, chewing on food and toys will keep their teeth from growing too long.
But, every once in a while, most hamster owners will have to deal with overgrown teeth. And that is not something to take lightly. 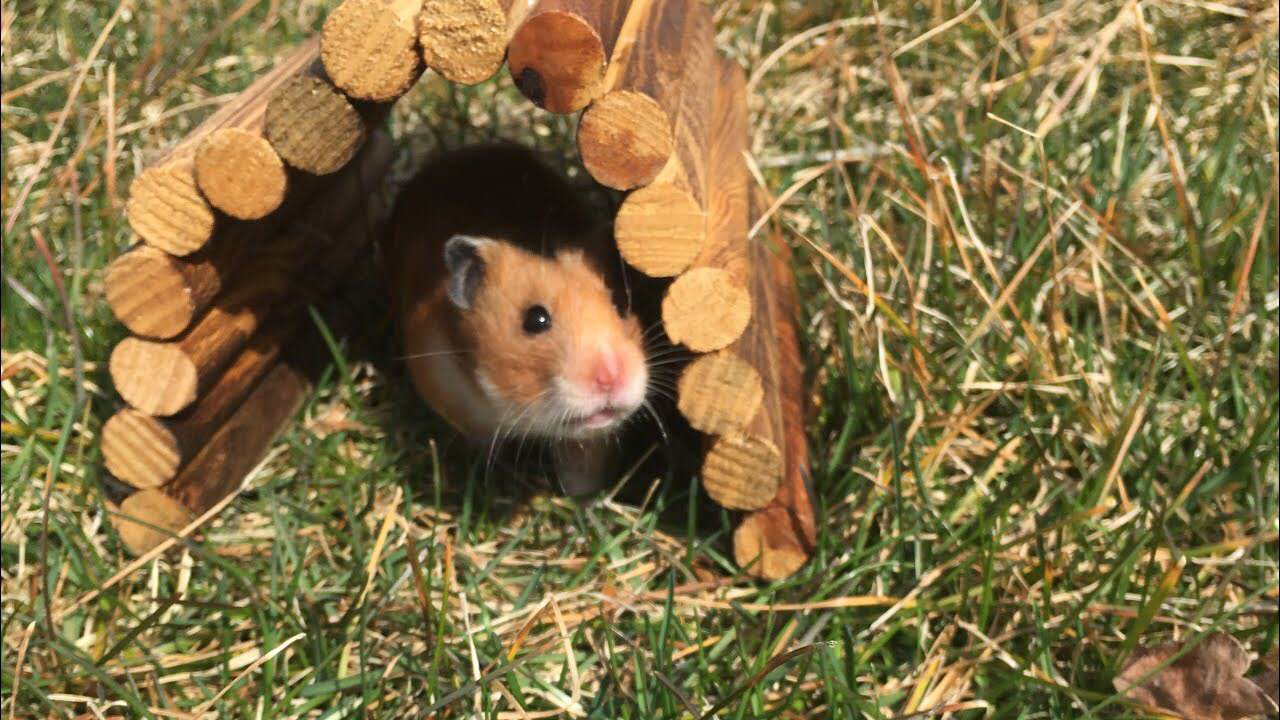 Front teeth, also called incisors, can easily become overgrown. This can be of concern because, as they grow, they curve inwards and can perforate the hamster’s gums or get stuck in its nose. It will also prevent them from eating properly. You can always take your hamster to the vet to get its teeth clipped.
But you can also do it yourself, with the help of a handy tutorial like the one Tanken was trying to make. That is, until his hamster had something else in mind. 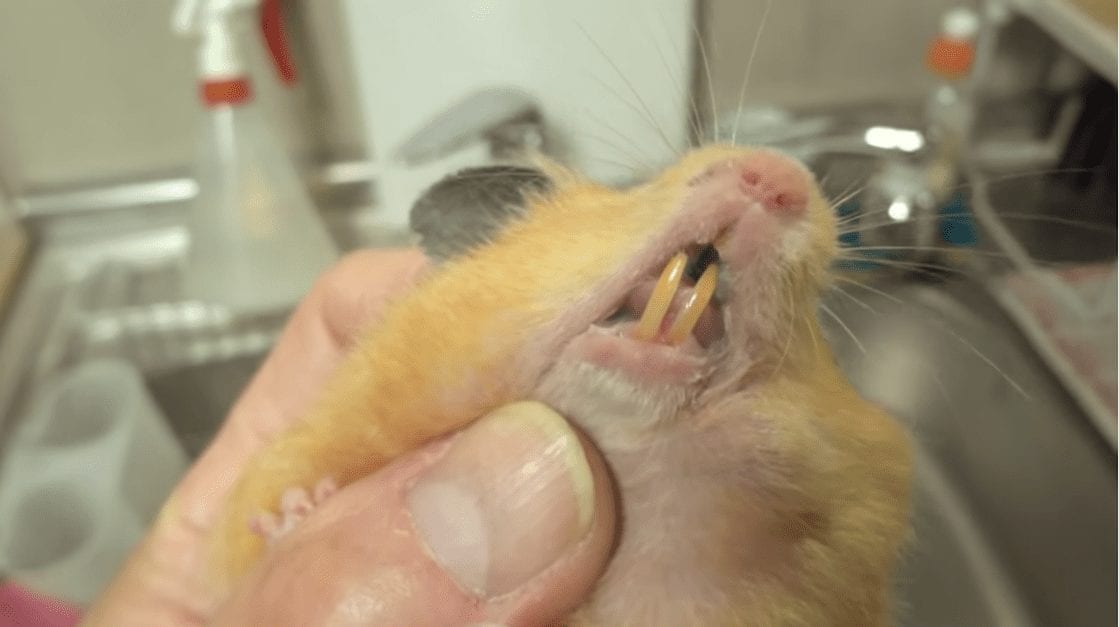 With camera in hand, Tanken took one of his little hamsters to the kitchen sink. He placed the little creature on its back and held it with one hand. First, he pried open the hamster’s lips to show the length of its incisors. The hamster was a little annoyed by this and wriggled in Tanken’s hands.
But Tanken kept a firm grip on the rodent’s body. Then the time came to open the hamster’s mouth and expose the teeth to the clippers. That’s when things started going south. 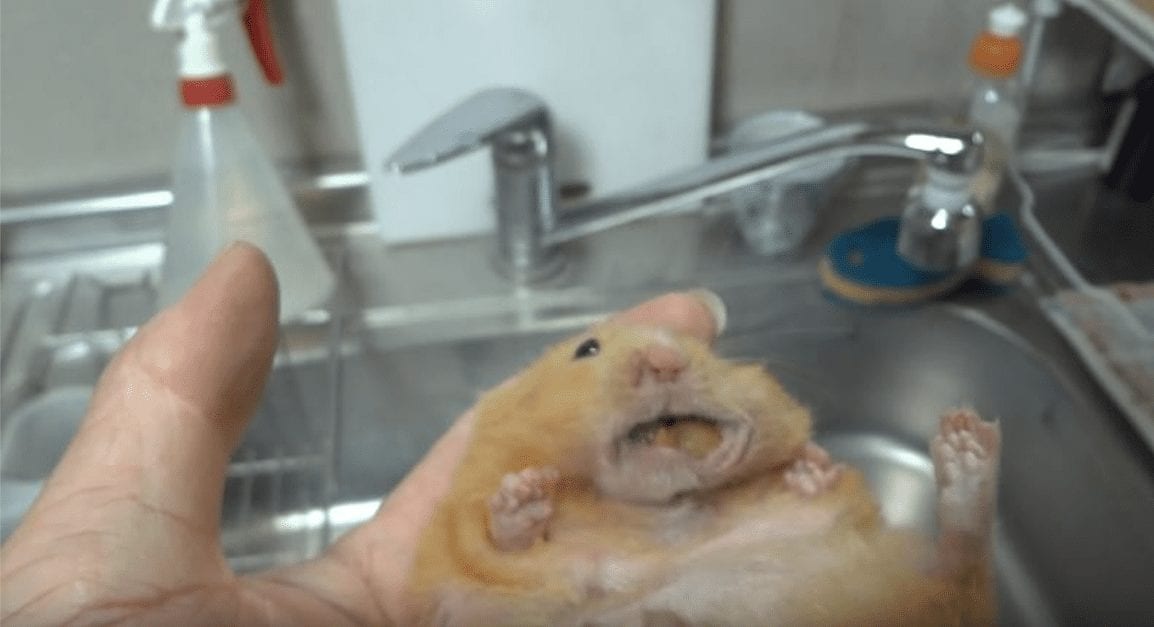 The hamster started moving more frantically and forcefully. It was clearly not happy about the pair of clippers looming closer to its mouth. With its little paws, it tried to push Tanken’s thumb away from its mouth and wriggled to break free from the man’s hand. Tanken didn’t flinch and soldiered on.
Then the hamster opened its mouth, revealing a strange object lodged inside. But it was gone just as fast as it had appeared. Tanken had no time to even guess what it was.


Something Odd Is Going On

Despite the hamster’s best efforts and the appearance of a strange object in its mouth, Tanken was determined to clip the creature’s teeth. He held tightly to the rodent with his left hand while he brought the clippers ever closer with his right hand.
Then, just as he was about to make the first snip, the strange object inside the hamster’s mouth made another appearance. And it was not alone. 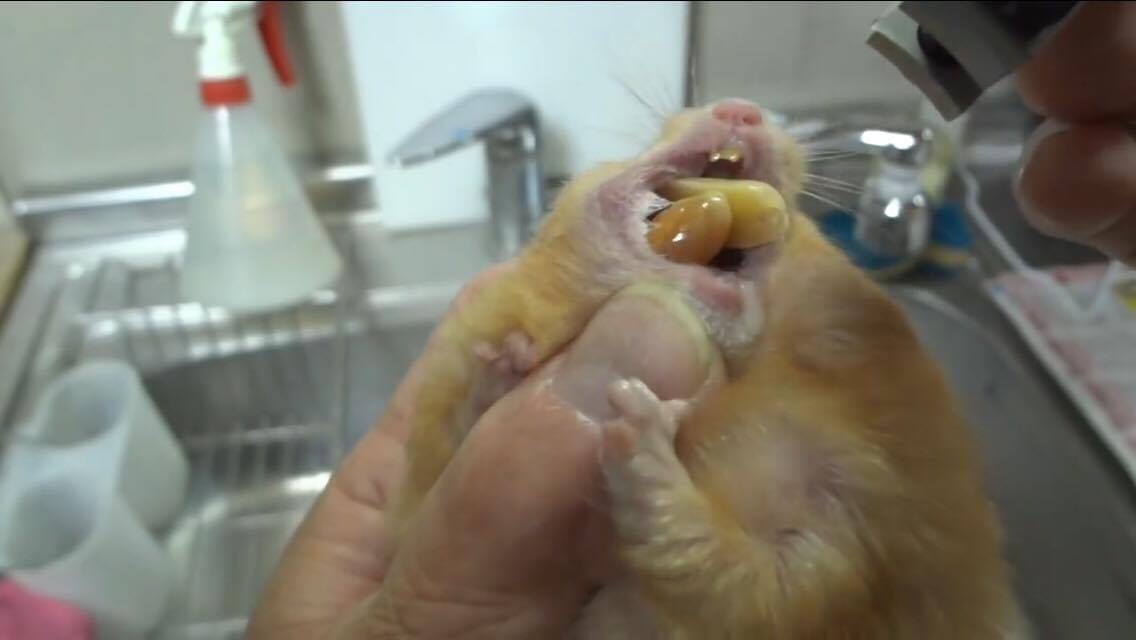 In its desperation to avoid the clippers, the hamster spit out what turned out to be a small cluster of peanuts into Tanken’s hand. Tanken started laughing. This little rodent clearly had a trick or two up its sleeve.
Still, that wasn’t about to deter hamster expert Tanken. He tossed the peanuts aside and tried again. But the hamster was not done resisting.

As soon as the clippers got too close for comfort again, the hamster spit out more peanuts. This time, though, they kept coming. The peanuts were pouring out of the creature’s mouth like they were Tic Tacs. More than a few seconds later, Tanken counted a total of 17 peanuts in his hand.
The hamster seemed to be saving them for a rainy day but had decided to use them as ammunition in its fight against the tooth clippers. Sadly for it, it was about to lose. 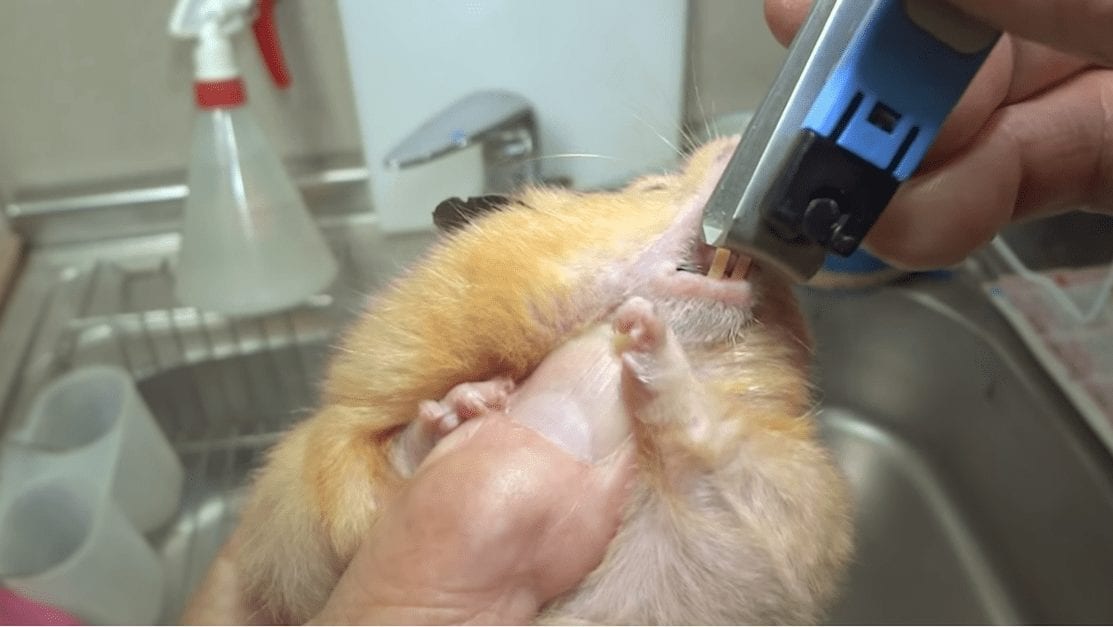 Once he made sure there were no more peanuts on the way, Tanken pried open the hamster’s mouth and, in one swift motion, clipped both of its bottom incisors to about half an inch.
Just like that, he was done. He then brought the hamster closer to his face and gently clipped the outer edges of the teeth to give them a more comfortable shape. The rodent seemed to realize the futility of its struggle.

Though the hamster was still wriggling and resisting, it didn’t seem to be making that much effort anymore. And, best of all, there were no more peanuts coming out of its mouth. This allowed Tanken to clip the upper incisors, which thankfully were not as long as the bottom ones.
Then he gave the hamster a gentle pat on the head and the procedure was done. He later posted the video, and what came next was completely unexpected.

Tanken has been running his YouTube channel for a couple of years, and most of his videos hover around the tens of thousands of views. But, for some reason, the teeth-clipping video was a different story. Perhaps it was the surprise appearance of the peanuts.
Whatever it was, the clip spread like wildfire and soon racked up millions of views. To this day, it has more than six million views. But Tanken simply carries on. 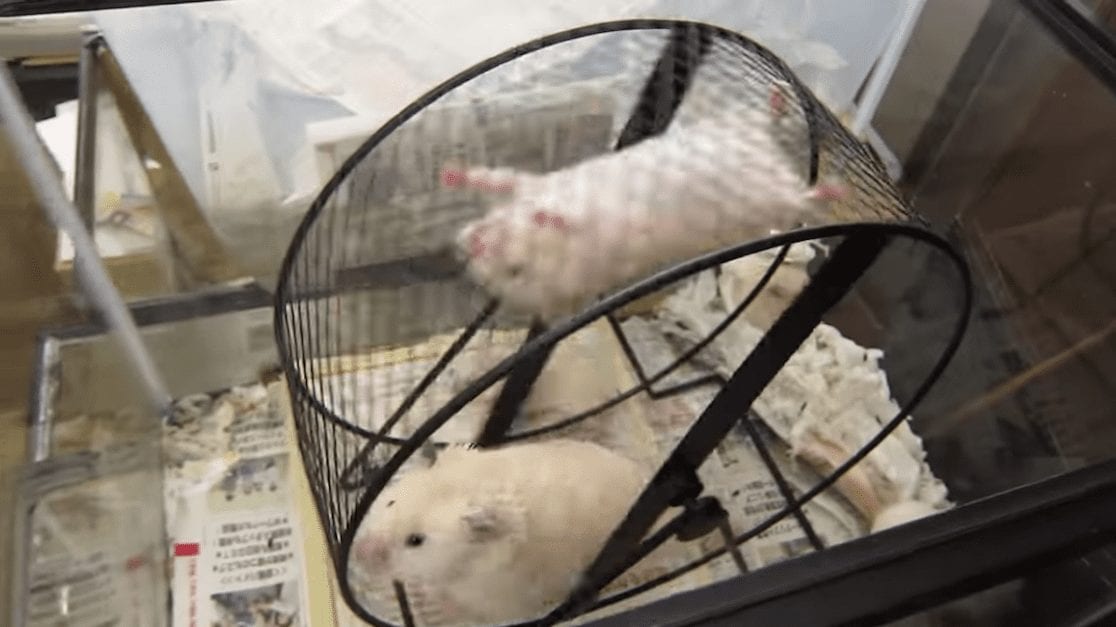 For Tanken, the most important thing he can achieve with his YouTube channel is to pass on his knowledge — with a healthy dose of cuteness. One of his recent videos features a mama hamster running inside a hamster wheel.
Her babies take notice and try to climb in with her, both inside and outside the wheel. It’s a funny clip that shows cats and dogs aren’t the only pets deserving of attention and affection. And no one knows this better than Tanken.
Must Read
Early Human Migration To The Americas Now Linked To Climate Change
Can Science Bring Back The Dodo Bird? One Lab Thinks It Can
Human Geneticists Finally Apologize For Horrific Past Experiments On Humans