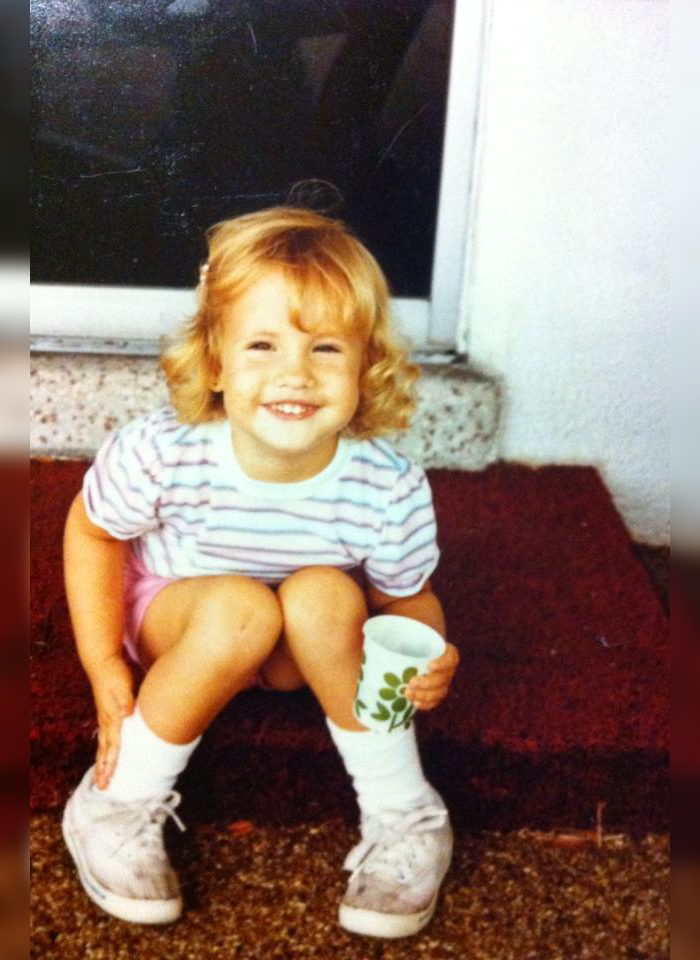 Amy Giberson’s very first crush was on this adorable little boy in her preschool class in St. Petersburg, Florida. As you’d expect from any kindergarten romance, their dates mainly involved sitting together during lunchtime, enjoying games of tag in the schoolyard and constructing castles out of building blocks.
And even though more than 30 years have gone by since then, their beloved teacher still recalls it all quite fondly. 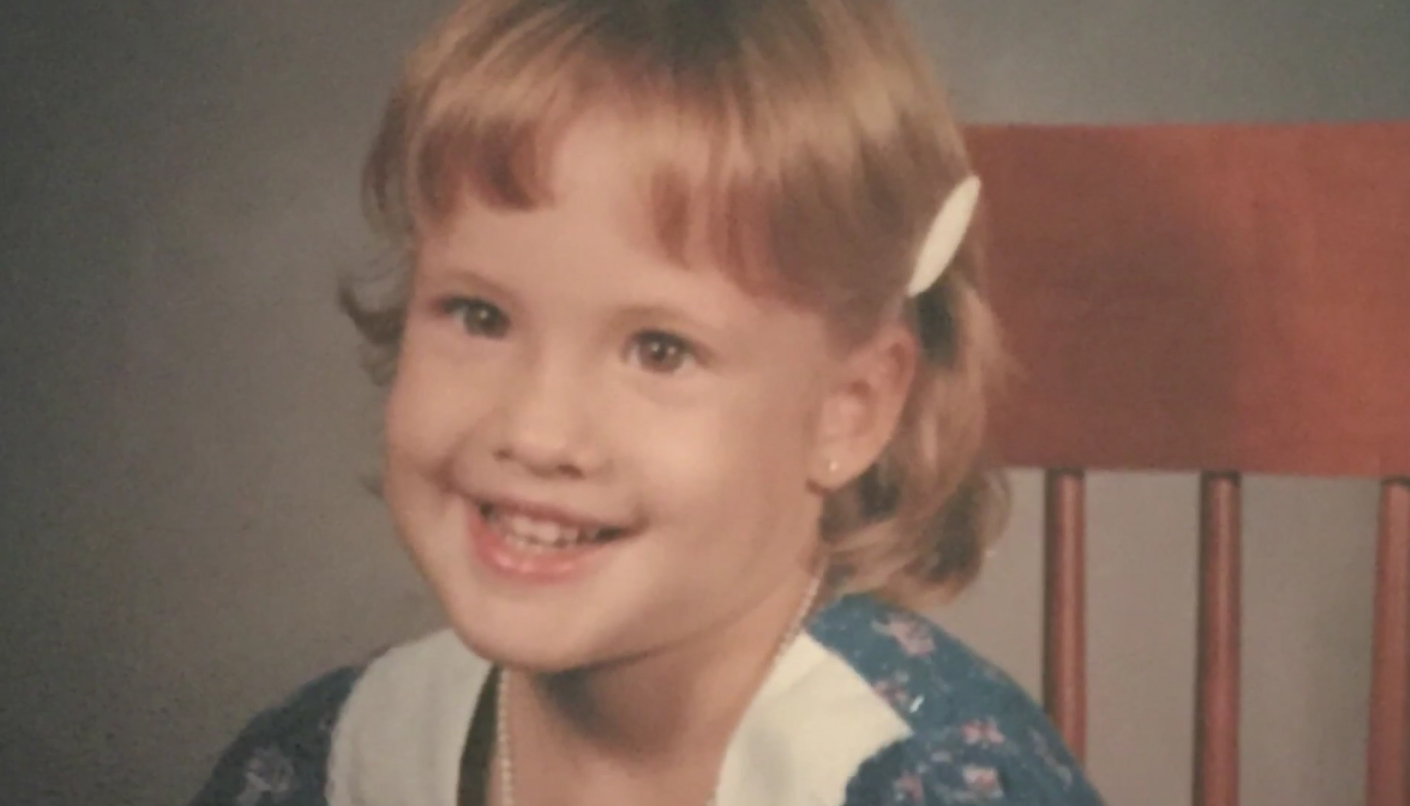 Their teacher Diane Tar recounted the toddlers’ adorable romance to People, “They had a blast with each other. It was a quiet, bashful romance. They liked each other from afar.
It was a young love, like a sweet crush.” Sadly though, this little love affair was short lived. Giberson, then three, and her tiny man started down their separate paths after graduating kindergarten. But would this be the end?

Her Heart On Her Sleeve 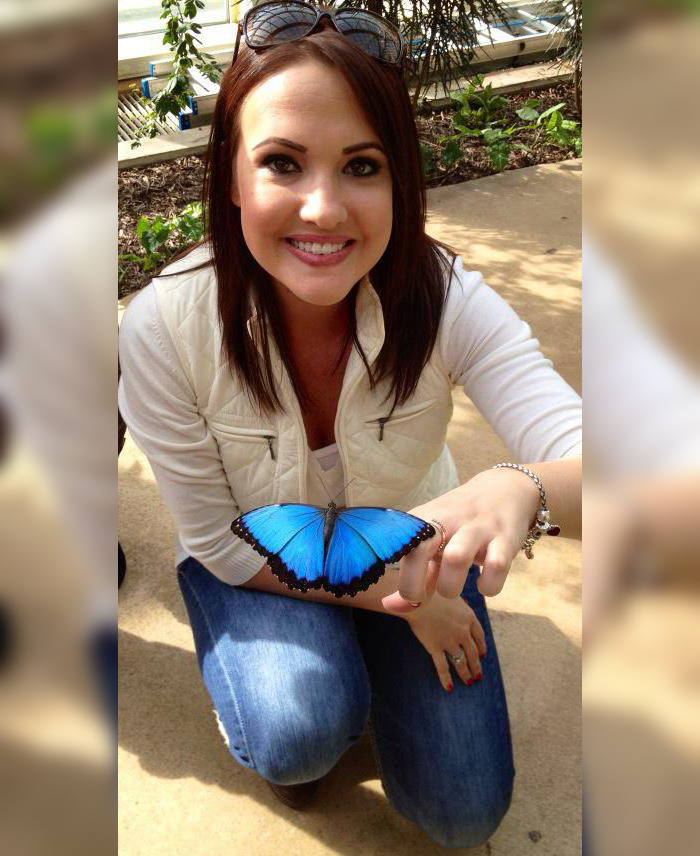 Fast forward several years and Giberson was off to university, leaving her long lost preschool crush behind her. But love life in adulthood, however, proved to be a far tougher experience.
After being hurt time and time again, her friends felt the need to step in. She was too full-on in her romances, always wearing her heart on her sleeve. But before getting seriously hurt, her friends were there to rush to her rescue.


I Wouldn’t Be Me 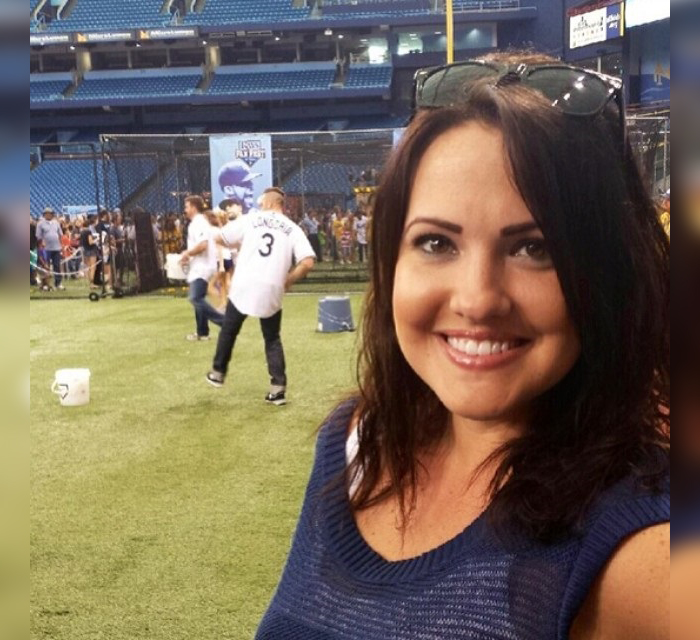 “People would tell me, ‘Don’t be so open, Amy. Don’t trust so easily,’” Giberson told Cosmopolitan back in November 2016. “But if I stopped doing that, it wouldn’t be me.”
“It’s just absolutely nuts that I [was] the tragically misguided girl who was always let down.” But at 32 years old, everything changed. 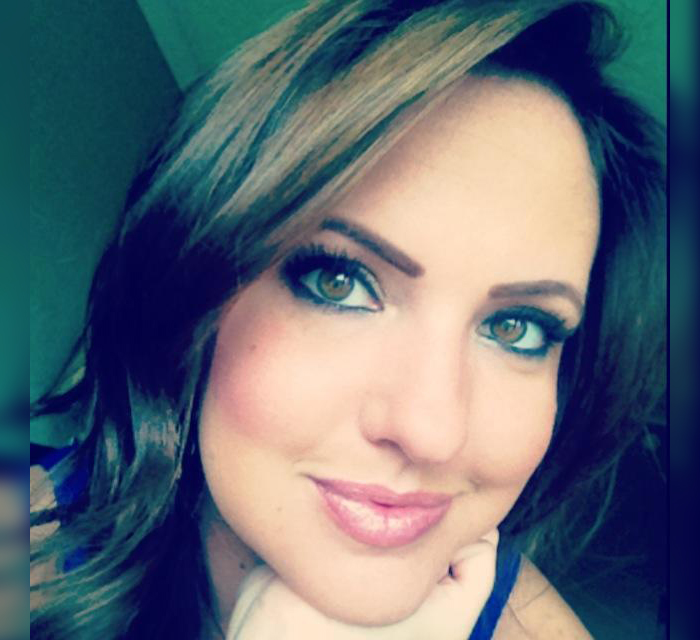 At 32 year old, Giberson was ready to settle down. What better place to do that than her hometown of St. Petersburg? But without her dream man, she was only half of the equation.
So she signed up on an online dating site. Not soon after, her shiny profile caught the eye of fellow St. Petersburg local, Justin Pounders. 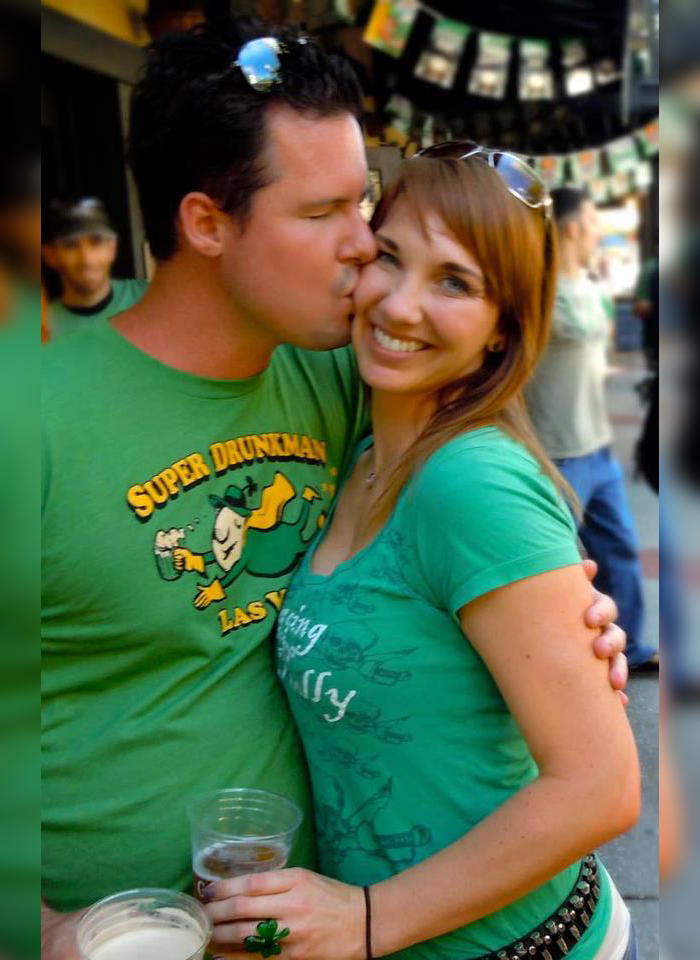 They were bound to hit it off. After all, much like Giberson, Pounders had also returned to his home town after his own heartbreaking love story. In 2012, Pounders and his then-fiancée, Adrianne Roberts, were about to move in together when tragedy struck.
On her way home after having a few farewell drinks with her roommate, Roberts was attacked and horribly murdered. 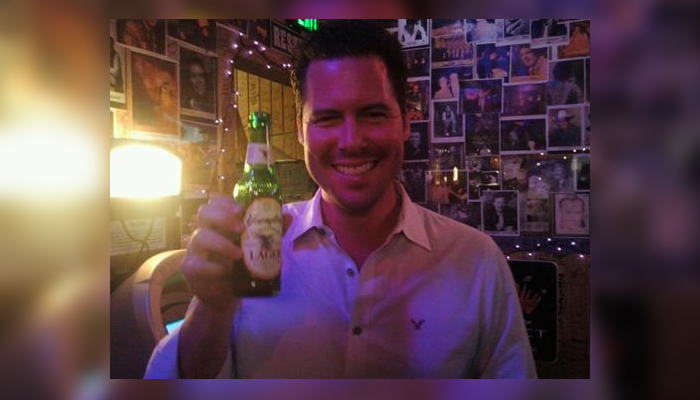 It took Pounders two years until he finally felt prepared to move on from his unfathomable loss.
So there he was, back in St. Petersburg looking for a real connection for the first time since the incident when he came across Giberson’s intriguing profile. After getting in touch, they felt an instant connection. 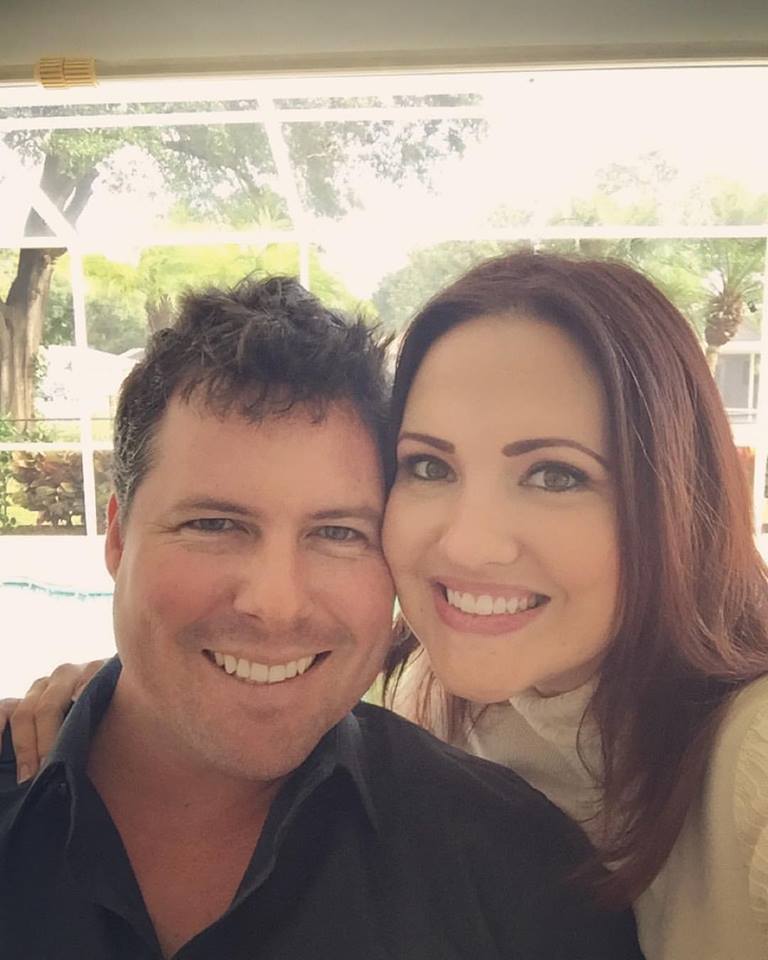 “I saw her photo and for whatever reason was instantly drawn to her,” Pounders told PEOPLE in November 2015. “She just had this great energy, you could tell.”
“I can’t explain it, but I knew I had to get to know this girl.” In no time at all, the pair planned their first night out. 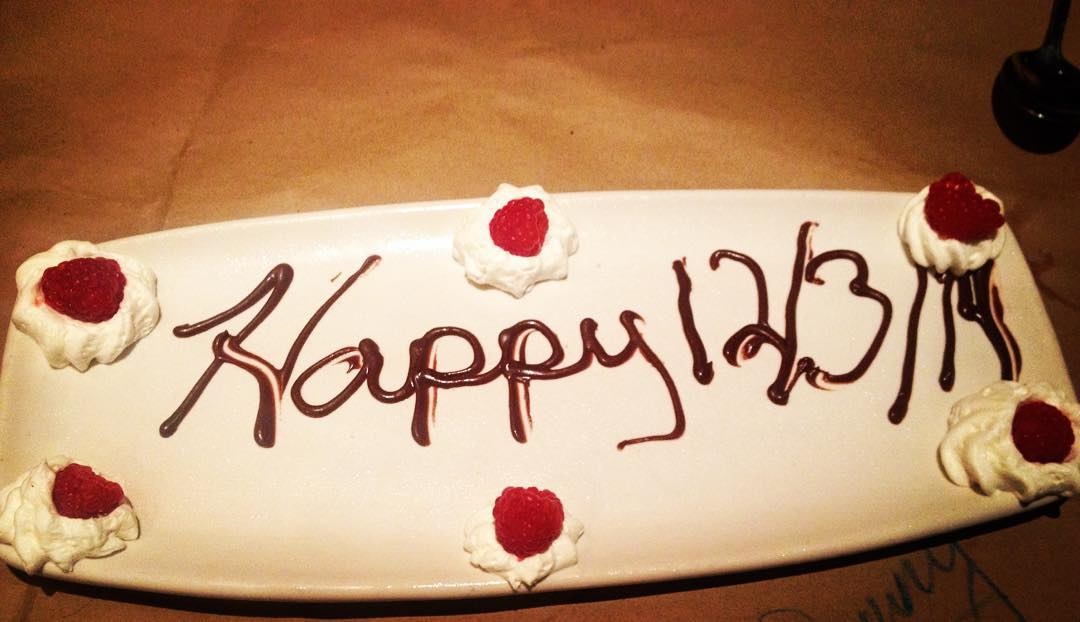 So they decided to meet up for dinner at a classy restaurant. Giberson felt an instant attraction to Pounders. “When we met up and we hugged, it was like I had known him my whole life,” she said.
Obviously, the date is going well if the waiter marks the date on their dessert! Smooth move waiter.


A Shiver Of Excitement 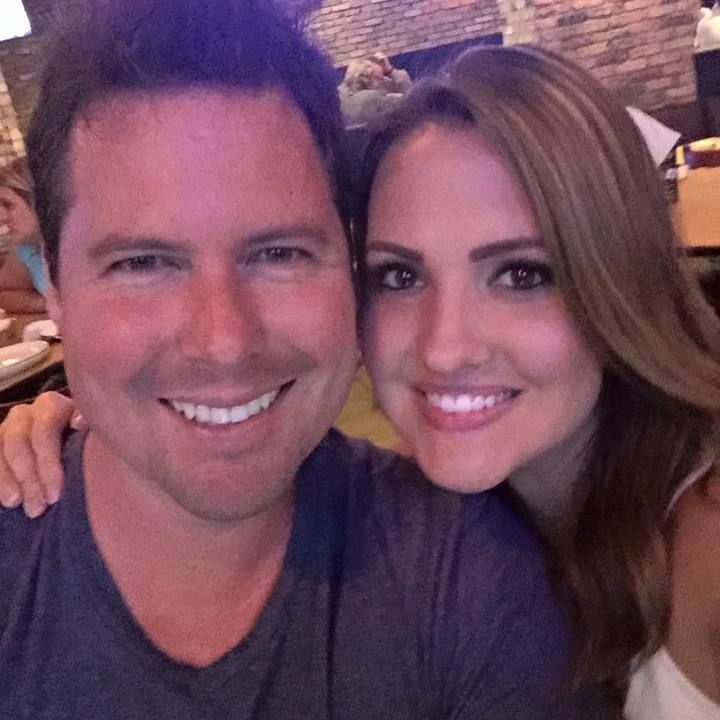 “Not even halfway through dinner I found myself shivering because I was so excited,” Giberson later told Cosmopolitan. “I remember telling myself, ‘I’m going to be having dinner with this man for the rest of my life.’”
After the success of the first date, their love began to blossom as the couple started meeting up nearly every day.


Little Did They Realize 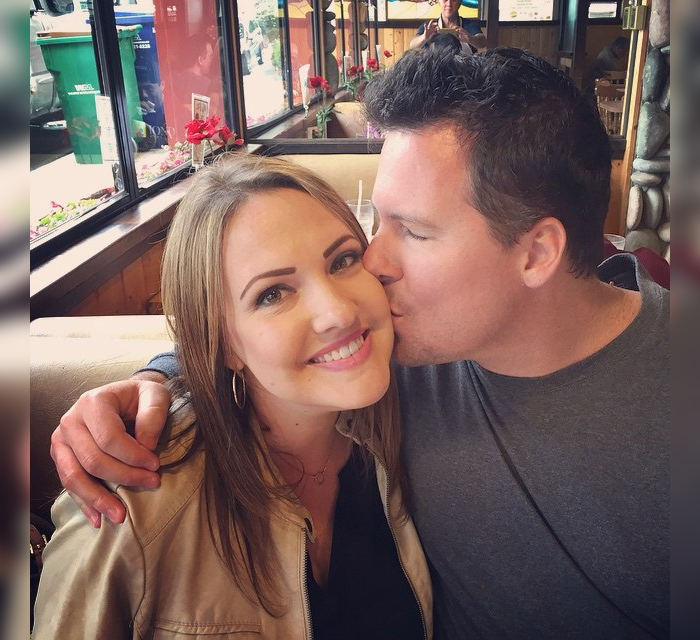 About two months into their relationship, Pounders made a very telling confession. “Justin casually mentioned he always liked my name because his first crush was a girl named Amy in preschool,” Giberson told Cosmopolitan.
“I joked and said, ‘Well it wasn’t me, so I don’t want to hear about this Amy.’” 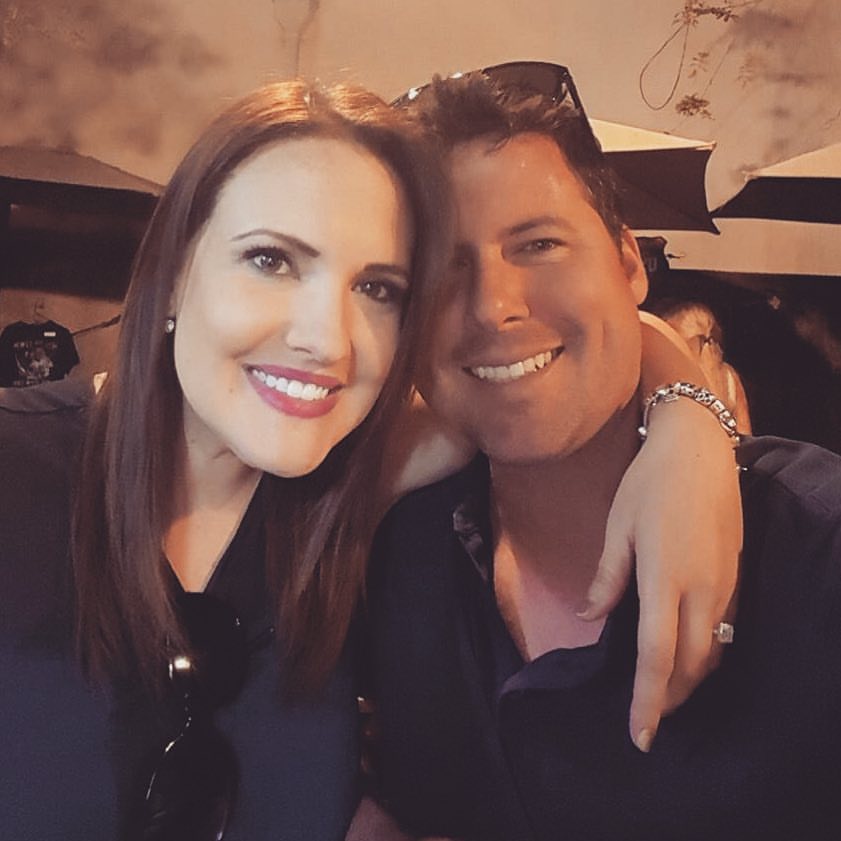 After the third month of their relationship, Giberson caught Pounders touching a small scar on his forehead. In preschool, when he was horsing around on the monkey bars, he fell and cut his open he revealed.
That was the moment that they discovered they had much more in common than they first realized.


Who Could Have Guessed? While they knew that they had both grown up close by, they figured that they had never known each other as they didn’t know any of the same people.
But as it turned out, 30 years ago Pounders went to the exact same preschool as Giberson did. 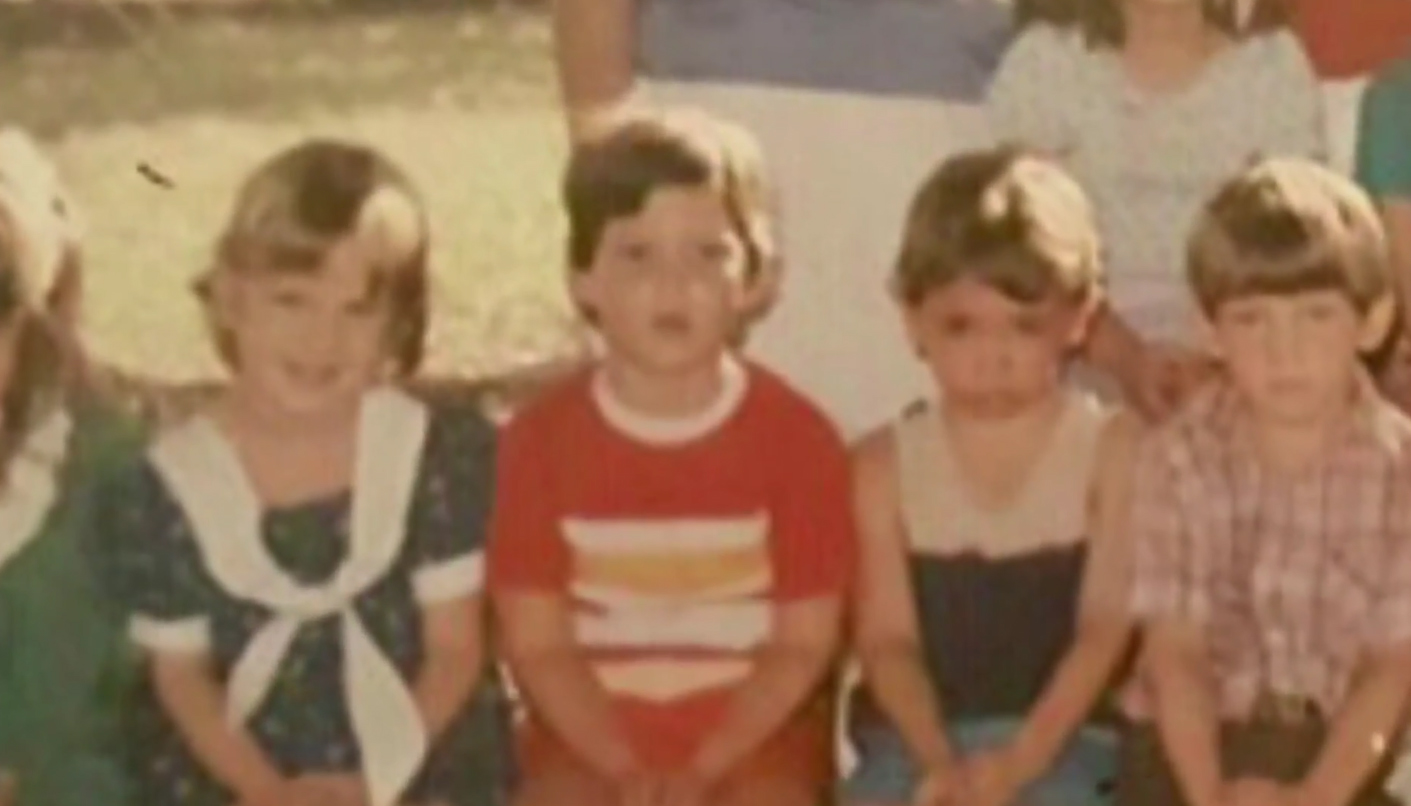 This revelation led Giberson to ask her mom to find the old photos from her preschool days. But when she brought out the old group picture of the kindergarten class, their connected past became crystal clear.
Astonishingly, Giberson and Pounders were there 30 years ago, sitting side by side!


I Was The Amy 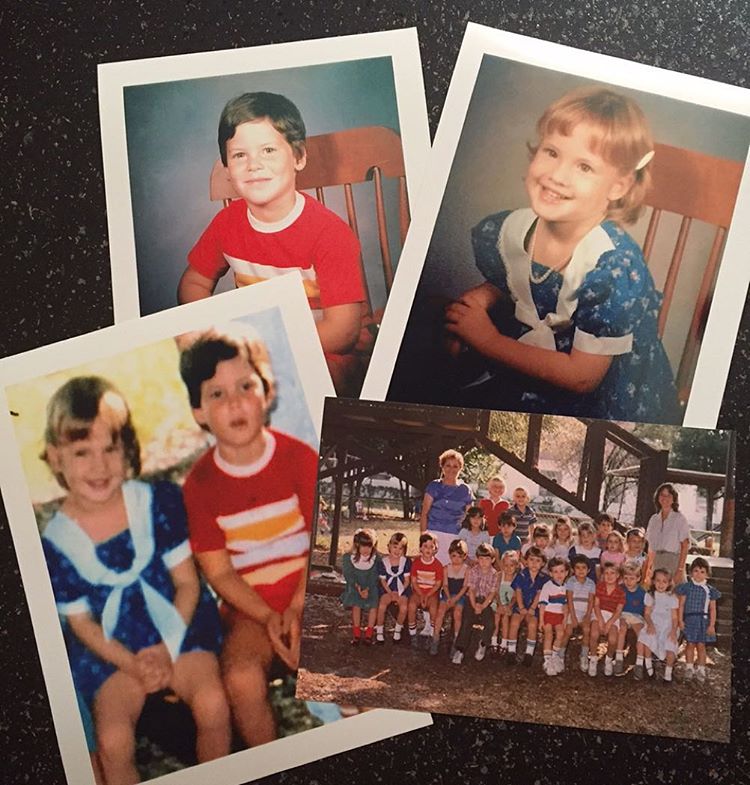 “We asked our parents to dig up any preschool photos they had,” Giberson told People. “Justin’s mom found a photo of the two of us together and I just started crying, I was ecstatic.”
“I was the Amy he had liked all those years ago! It was definitely meant to be.” 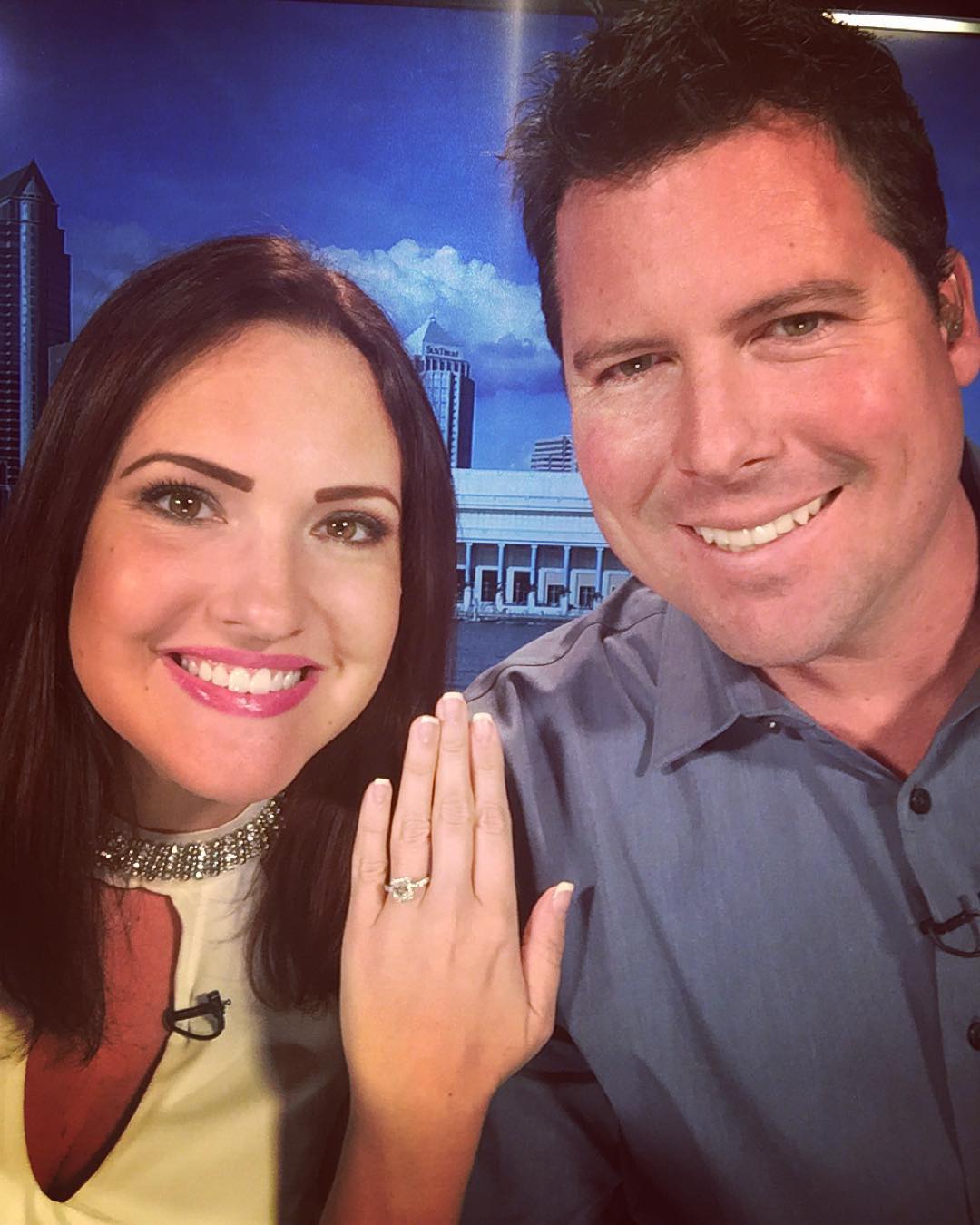 A year had passed since they had met, as it turned out, for the second time, and Pounders had a little something up his sleeve. After making a special appearance on The View, while the couple was retelling their amazing story, Pounders sprung into action.
Unexpectedly, the cameras were rolling at the preschool where they first met. There, a group of little students was holding up a sign that read, “Amy, will you marry me?” 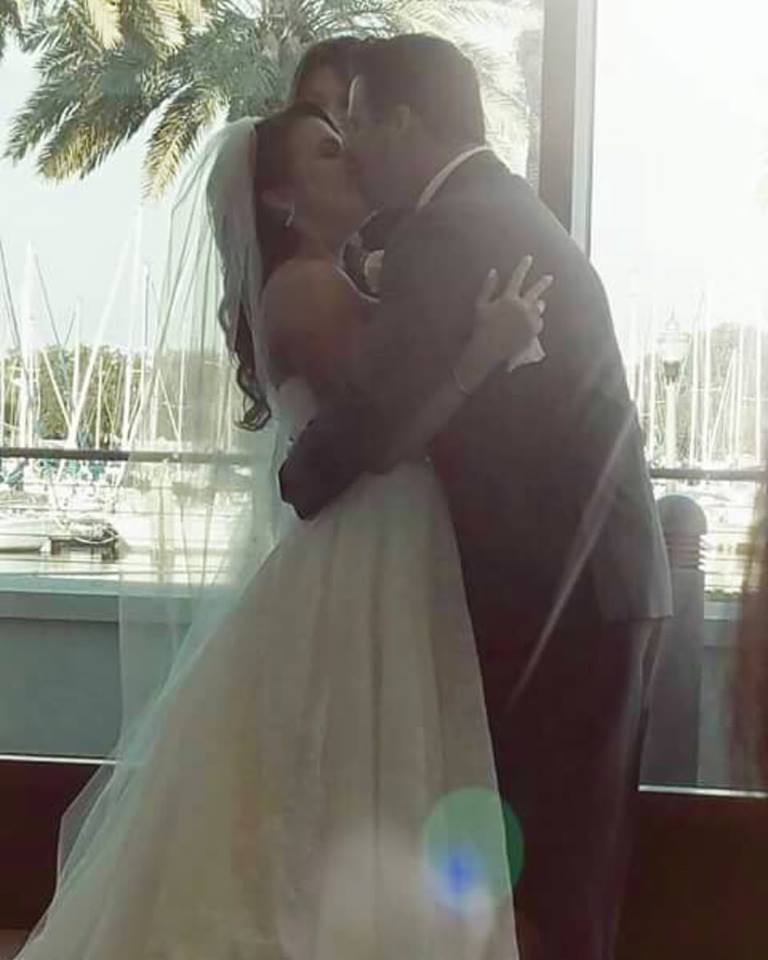 A year after the big engagement surprise, Amy Giberson became Mrs. Amy Pounders.
On November 18, 2016, at the Mahaffey Theater in St. Petersburg, they tied the knot. 30 years after they even knew it all started in preschool, the two went on to live happily ever after. Truth truly is stranger than fiction.
Must Read
European Space Agency Budget Increases By 10 Billion For The Next 3 Years
Artemis 1 Finally Launches: What It Means For Space Travel And Exploration
Clam Species Presumed Extinct For 40,000 Years Has Been Found Alive