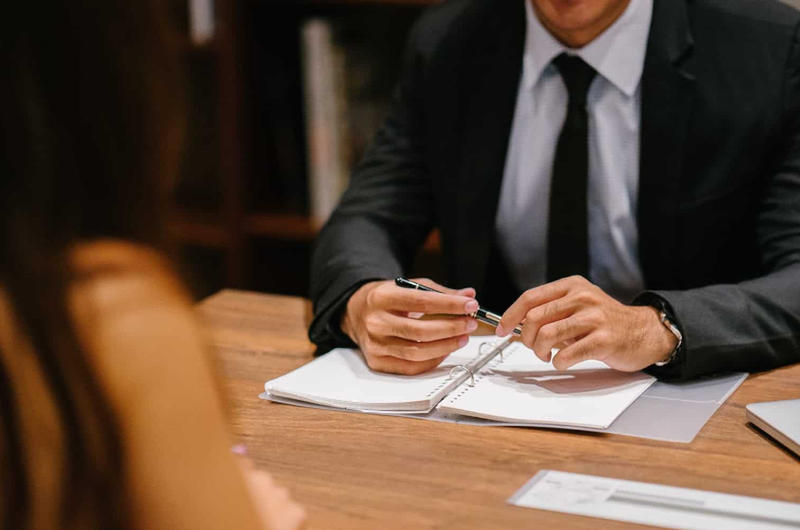 A Turn Of Events

The room was filled with people, all around it was a chorus of emotions. From smiling to cheering to crying and gasping. There were two figures seated at the front of the room, waiting impatiently for their turn.

When the verdict was read aloud the impatient figures’ faces turned red with rage. The rest of the people in the room couldn’t help but laugh at the spectacle. 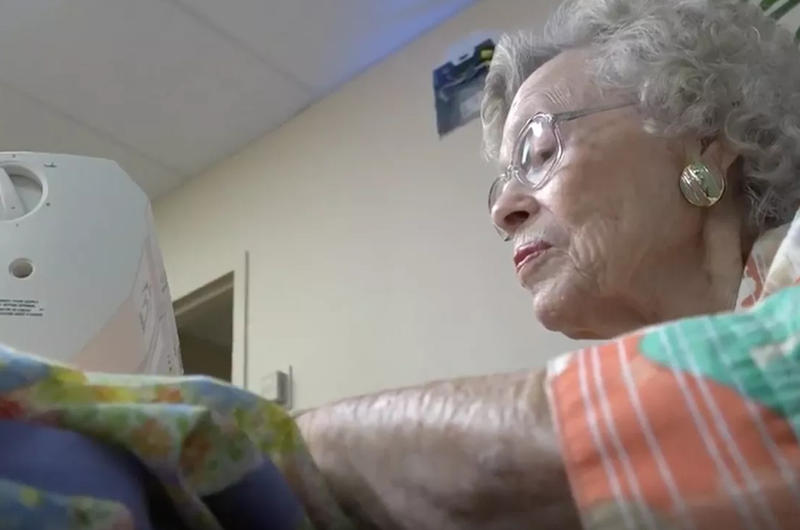 Daniella went to her own church while her grandmother went to a different one. Despite this, Daniella loved to help her out in any way she could, she would help cook for her church or even help organize events.

Her grandmother always looked at her granddaughter fondly and would treat her with nothing but kindness. But not everyone saw it that way, two people, in particular, exploited her kind nature. 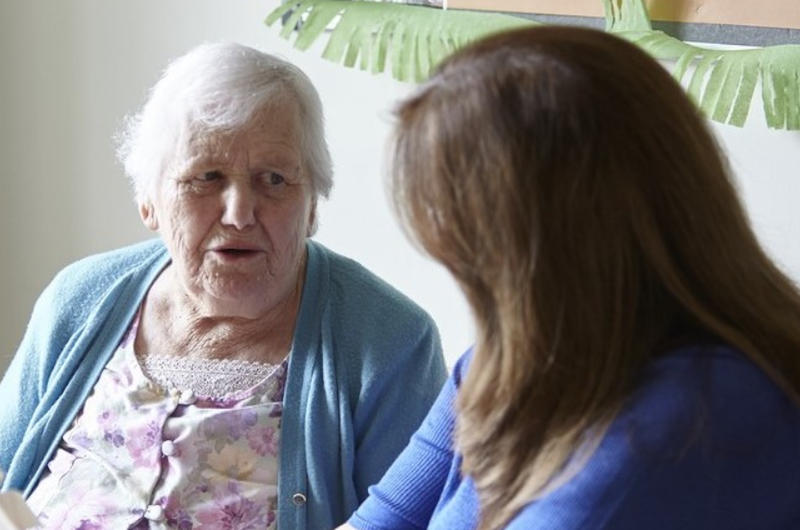 Grandmother Edith was a devout worshipper and had gone to the same church for nearly 50 years. It was an Evangelical church located in a suburb in the bible belt of the south.

Edith put in her fair share of hours to ensure that she did her part for her church. She spent every Sunday in the nursery, would cook breakfasts and dinners, organize events, and was a teacher for the Youth Bible Study on Sunday nights. Edith would also donate a small portion of her pension once a month to the church. She was a very generous person and wanted to help in any way she could.

Daniella can even recall Edith driving back to town from their retreat to get some evangelical equipment her pastor had forgotten. She only got back to the retreat the next morning and didn’t even get a thank you. 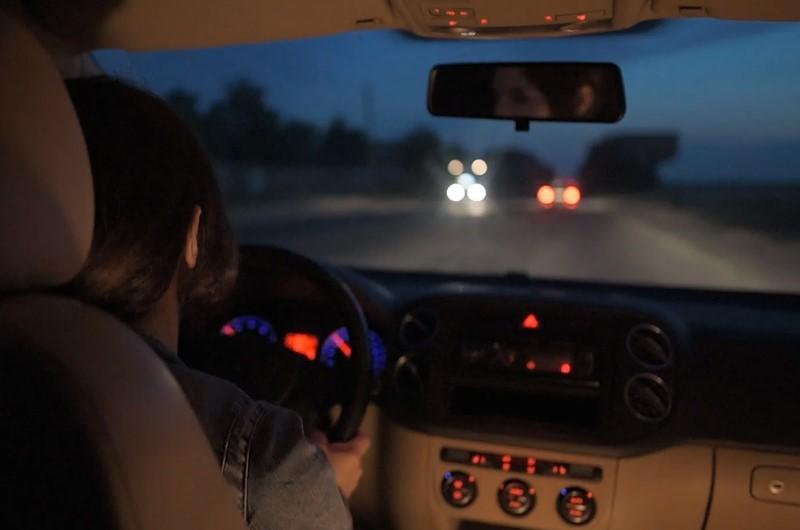 This was something that annoyed Daniella greatly. Pastor McConnel’s advisor, Paster James, didn’t know that Edith was covering for him at every turn.

Daniella could tell that Edith didn’t really mind all that much She was always positive and told her granddaughter that her generosity would be repaid by Jesus. 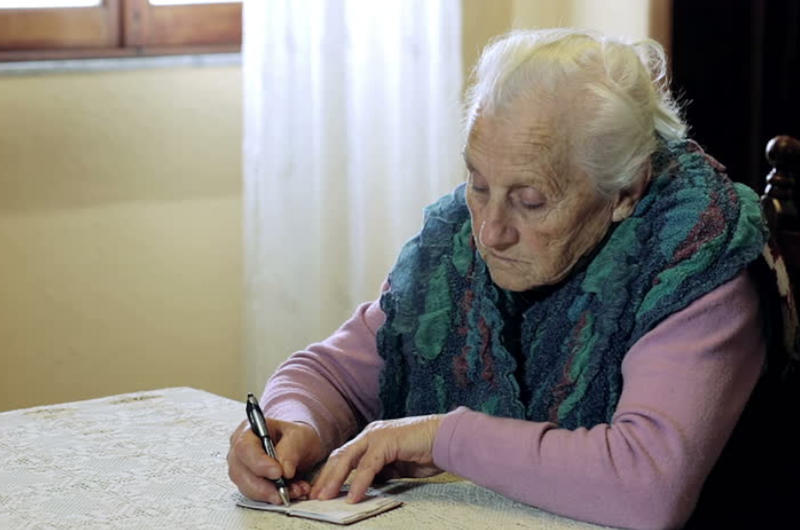 After an accident at Edith’s age. She couldn’t do anything but lie in bed. At her age, she had many health issues slowly appearing. Daniella could only watch while Edith became more and more reclusive.

Edith had now been bound to the inside of her house for ten years. She hadn’t gone to her local church for a long time, but she still tried hard to try to reach out and speak to people. But Daniella saw how her offers to reach out were rudely rejected. 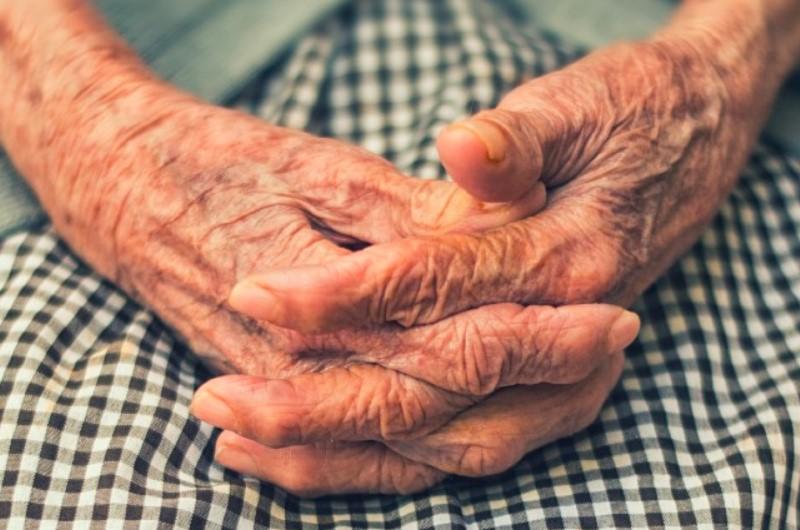 Even though Edith’s body was slowly deteriorating, her mind was still as strong as ever since she never drank alcohol and had always trained it mentally every day. Her family tried to stay as close as they possibly could to her. But they could tell that she was really sad about her not being able to attend worship.

When Edith went into hospice, she could feel that her life was almost over. She wanted to arrange her own funeral service, something she was adamant about. But this is when the pastor showed his real side. 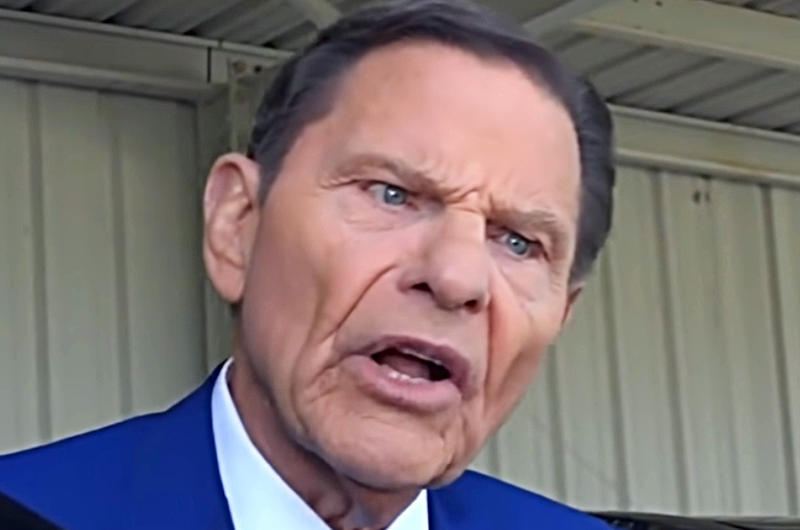 Daniella clenched her hand into a fist when her pastor, James, said that he couldn’t help her and rather sent someone beneath him after making her wait for three days.

Pastor McConnel was the one that came over and obviously wasn’t her first choice from prior experience with him. He sped over the courtesies and got straight to what she wanted at her service. Then he brought up one topic with a glint in his eyes – her will. 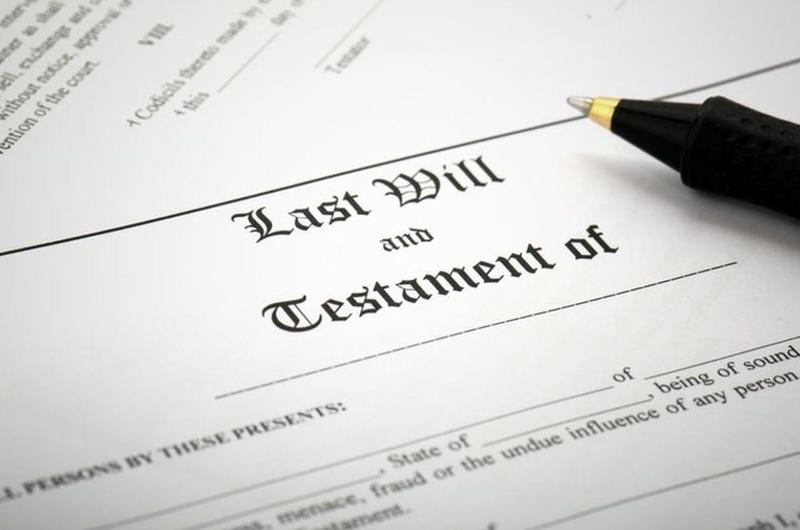 There had been many speculations about how much money Edith had saved away in her lifetime. The church was apparently also heard about this.

What Pastor McConnel said next had Daniella shaking with anger before her grandfather stepping, rage in his eyes, “Lay up your treasure in Heaven by remembering your church in your will.” 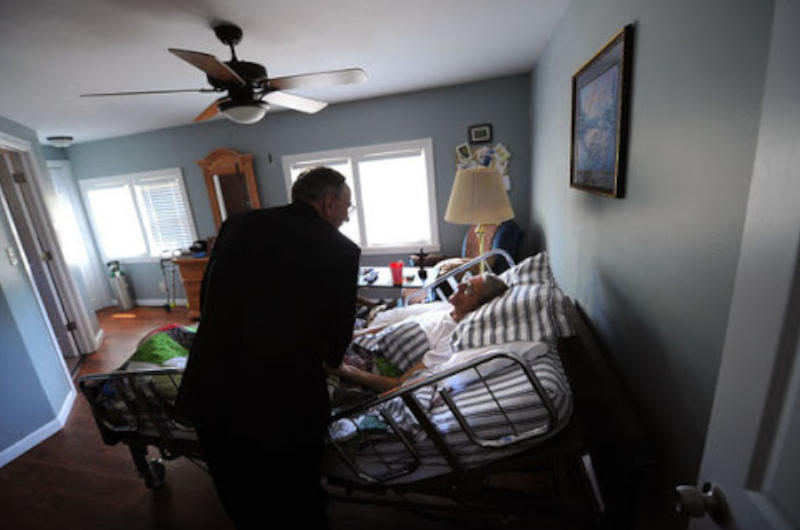 Edith’s husband told him that it was not appropriate to discuss things like money at a time like this. The pastor took a step back and rethought his approach, then smiled at Edith and spoke about the service.

But he slowly slipped the topic of money back into their conversation. It was apparent that that’s what he was really interested in. What happened next had Daniella shaking. 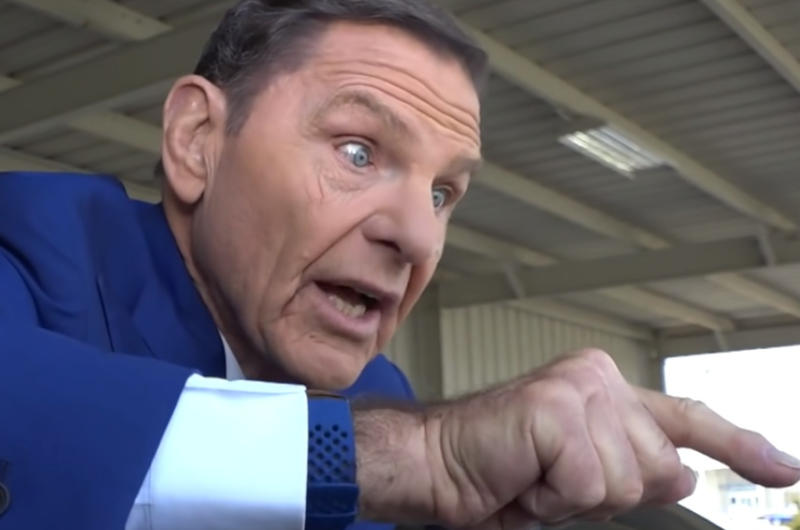 Her grandma cried. Over the years, her family had come to appreciate that she wasn’t a “Steel Magnolia,” she was “Titanium Coated With Diamond, Wrapped In Kevlar.”

She would shed tears for others, but never for herself. Now, this frail woman was bawling her eyes out. The grandfather, former Marine Sergeant and Korean War combat veteran, forcibly removed the pastor. But it would be six more months before they would see the final results of the conversation… and Edith’s spectacular payback. 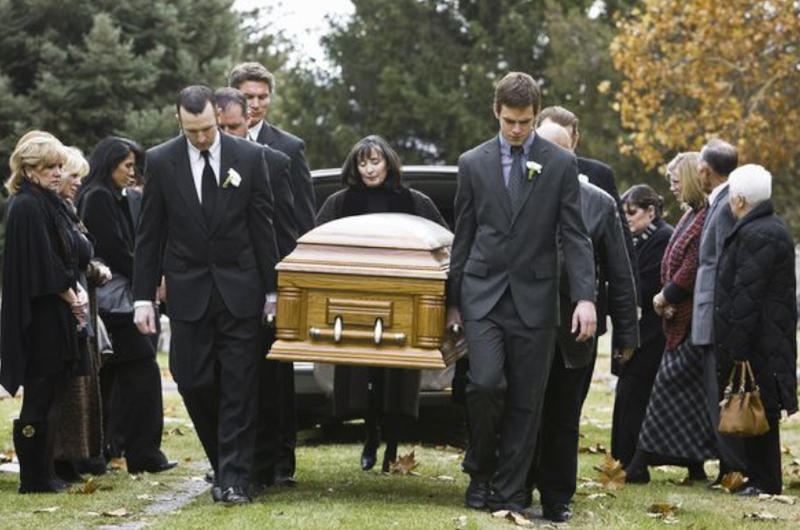 The family was heartbroken when Grandma Edith finally passed, but the funeral was filled with happy stories and plenty of laughter.

Upon request, the pastors were not invited. However, they were asked to come to the reading of the will. They were placed at the front of the room in front of the entire family. But Grandma still had a few surprises up her sleeve. 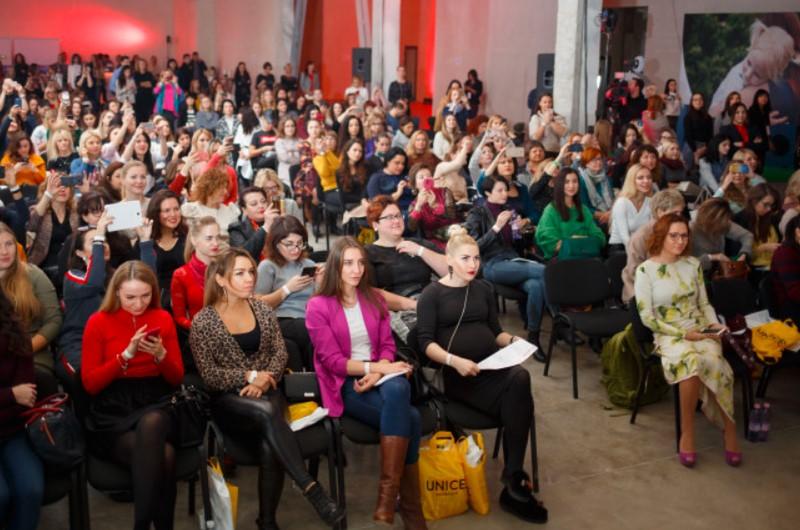 “The Reading of the Will” had become something of a tradition in Daniella’s family. It was an excuse for everyone to get together — a “family reunion” of sorts.

It was held in a conference room at the lawyer’s office, which was packed to the rafters with aunts, uncles, great aunts, great uncles, and many of the grandchildren… and the two pastors, who were given special seats facing the room. The air was abuzz with excitement. You see, there were rumors that there would be a few “surprises.” The will was read and it was clear their grandma’s generosity stayed well past her passing. Everyone received mementos and significant gifts of money.

Finally, it came to the church and the pastors were already looking ravenous for their share of the estate. The lawyer pulled out a letter that Grandma Edith had drafted, just for them. “I worked very hard for you when you needed me, for many, many years. But when I needed you and your church, you all pretended that I didn’t exist.” Daniella stood near the back, trying hard to contain her giggles. The letter went on to expose all the greed and poor behavior from the pastors. She described how they had only shown interest that one last time to try and take her money.

“I realized that I had allowed my church to break my heart for one last time. But that was the last time. The VERY last time,” Edith’s letter continued. Next was the first strike of payback.

20 Percent Of Her Estate “Pastor McConnel did not know it when he visited me, but Grandpa and I had already prepared my will, long before his visit, which did include a double tithe – twenty percent – of my ENTIRE ESTATE, for what was now my former church,” The lawyer continued.

“But I got to feeling badly that we had not personally remembered such nice people as Pastor James and Pastor McConnel. So I changed my will to include them by name. While I was at it, I changed the amount of money that I left to the church.” The US Coins Guide

“I’ve included money to reflect the love they, and the church haven’t given me over the last ten years,” the letter continued. Both pastors and the church received one cent each.

The pastors, sitting conspicuously in front of the entire family, looked as if “someone had injected a gallon of novocaine into their jaws,” Daniella said. The family tried to contain their smiles, but there was still one more strike to come. Grandma Edith wasn’t finished yet. “There is one last bequest,” the lawyer continued, pausing for dramatic effect. Every eye in the room was now fixed on the two pastors, who were trying to compose themselves after the brutal comeuppance that Grandma Edith had just served from the grave.

Daniella and her family suppressed their laughter — but only because they knew that Grandma Edith was simply setting the greedy pastors up for a one-two punch. Daniella had nearly fallen out of her chair when she heard the enormous amount her grandmother was going to leave the church … emphasis on “was.”

Instead, she listened in awe as the lawyer named a different congregation. That’s when the pastors’ eyes widened and their faces changed from a look of incredulity to pure horror. But why? It had slipped a few times that the pastors, despite preaching tolerance, were quite the opposite. They had their flock remain mostly Caucasian for very questionable reasons.

Grandma Edith and Grandpa had battled against it for years and had even considered leaving her church because of it. But they had reasoned that it was better to stay there and teach tolerance by their words and example. So, in the end, Edith reached out with one final lesson that had the entire family nodding in agreement. “Their faces displayed the same expressions of shock, dread, and horror that they would have if the lawyer had said, “This bequest goes to The Demonic Baby Eaters to buy extra large rotisserie barbecue grills and tons of charcoal,” Danielle wrote in a post on Reddit.

“To many white Southerners, this was one of the most personally insulting things you could do to them. It simultaneously labeled them as racists, condemned their bigotry, and crushed their delusions of white superiority,” Daniella explained. The amount was exactly the same as what the pastors would have received… if they had just shown kindness.

The old couple had secretly been giving their donations to the place they felt most deserved it. The pastors quickly left the room, and Edith’s strength would remain a story the family would tell for years.

Naturally, Daniella’s story blew up on Reddit’s ProRevenge thread. The post has garnered over 1,600 comments to date. But one user had an interesting question to ask: “What was the pastors’ reaction after that?!”

Daniella responded: “We had all been swallowing our uproarious laughter since the “one cent” bequests had been read…. the whole meeting quickly devolved into utter chaos. If I remember correctly, ( the pastors) left in a huff, which was made comically more difficult by the fact that they had to push past over a dozen of Grandma’s heirs, between and the room’s only door, who now knew what scumballs they were.” “If I remember correctly, I heard through the family grapevine that some lawyer, representing (the pastors and church) did call my uncle and threaten to dispute the will,” Daniella added.

“My uncle’s response was, “If you do that, everything that happened in that meeting will become a matter of public record. Are you sure you want that in the local newspapers and on TV?” That’s the last my uncle ever heard about it from them.”