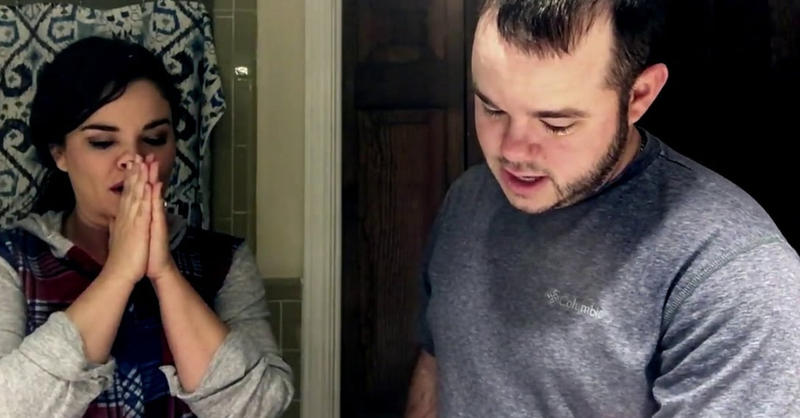 The Moment She Found Out

They could feel the tension, it was thick like a sponge cake. Kayla couldn’t speak, she needed to take deep breaths. Then her husband came in and they both took a look at the reveal – the pregnancy test.

But what they saw they both couldn’t believe. It was clear to everyone, she was pregnant. 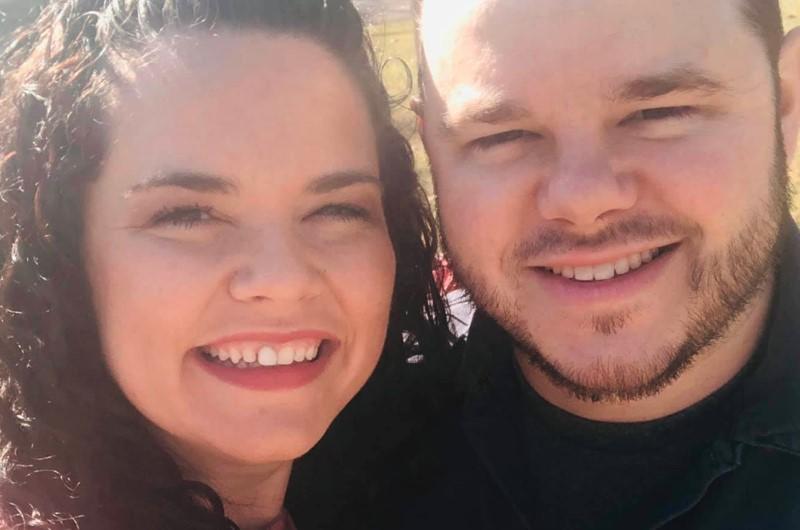 29-year-old Kayla Jones had always wanted a big family, but she had known since she was just 17 that it was unlikely that she’d ever be a mom.   Kayla always had dreams of having lots of kids. But ever since she was 17 she knew that it wasn’t going to be the case. Now she was 29.

She found the man of her dreams and married him in 2012. They had dogs but it wasn’t the same, they wanted more, they wanted kids. 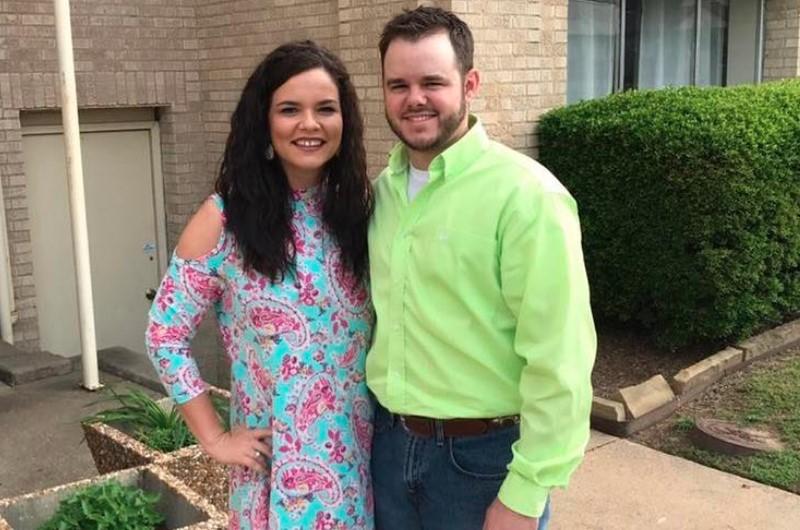 Months went by with no success, Kayla knew it was going to be hard, but she wanted there to be some kind of progress.

She knew now that she couldn’t do this on her own, she needed to consult an expert about this. But she had no idea things would get harder. 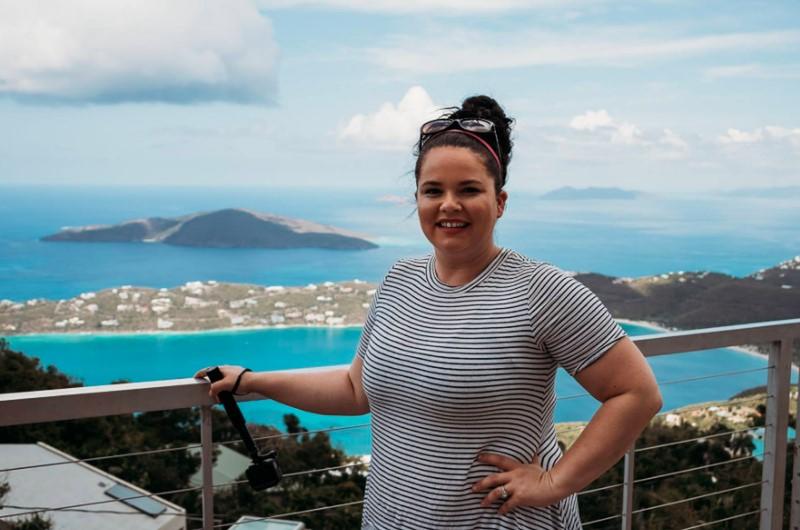 She got to the doctor’s office and got the news she didn’t want… They confirmed what had been suspected and she was heartbroken.

She couldn’t believe the results. She knew it came back to her time as a teenager, the reasons she couldn’t have children now. 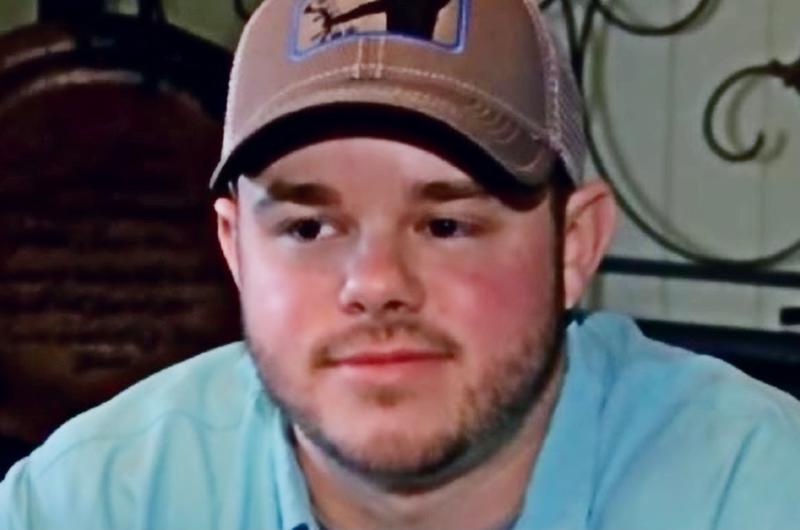 She had already told her husband about her complications from her younger years. But he reassured her that it would still be possible to have a child with her. But she felt that her dreams of being a parent were slipping through her fingers.

Cody, her husband, was quite upset too, but he didn’t want to alarm Kayla, so he hid his feelings.

Kayla and Cody really wanted kids of their own, the problems came with conceiving naturally.

Kayla felt awful that she couldn’t give Cody what they both wanted. She needed to have a deep conversation with him. 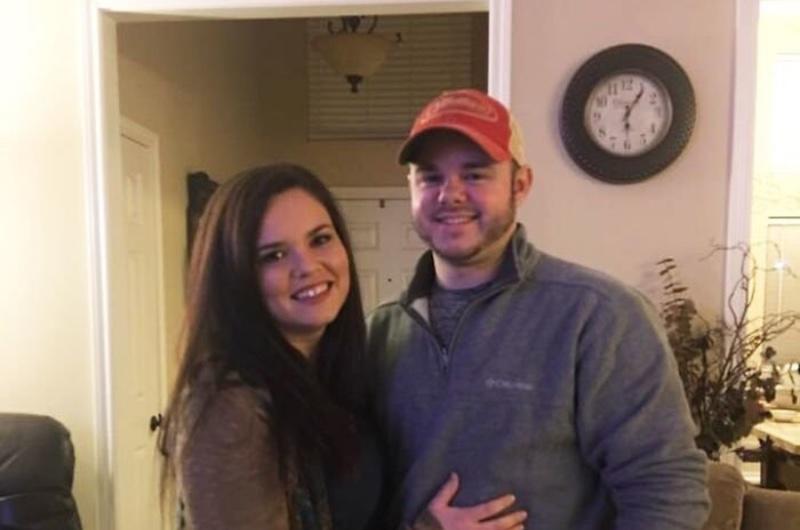 They needed to know where they would go from that point. She could feel the tensions rising as she knew she couldn’t give Cody what he wanted. But they needed to figure out what they could do going forward.

The conversation would make or break them. They talked about all options and then Cody finally told her what he was really concerned about. 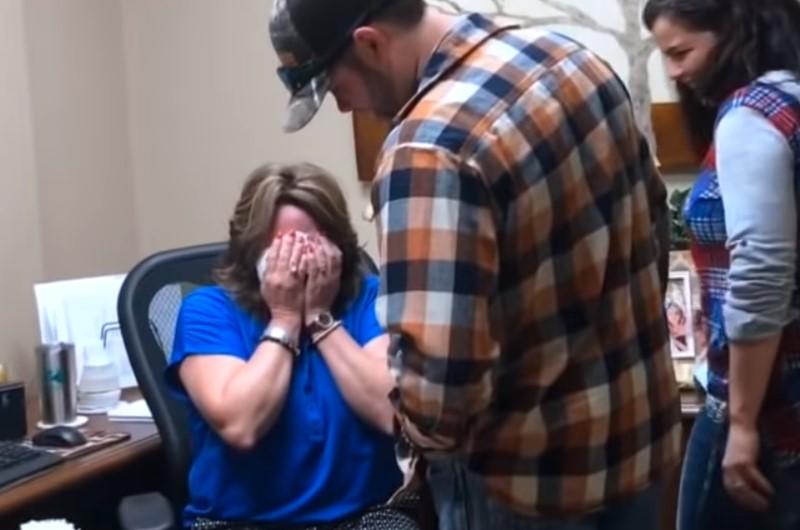 Before this they felt that they had gotten everything they wanted. They were happily married and got a lot out of life. But it was just children that were missing from the picture.

But Kayla had surgery at the age of 17 that would make it very difficult for her to bear children. Cody didn’t want to end things and instead suggested that they consider adopting, but Kayla had always dreamed of having a child of her own.

Despondent and growing desperate, however, she decided to look into adoption. Then they started to look at their other options, but they could have never guessed where their final hope came from. They decided they weren’t going to give up on their dream together so easily. But after doing some research, they were faced with yet another obstacle between them and growing their family.

They knew adoption wouldn’t be easy but they had no idea how hard it was. They felt like they were way over their heads, but that’s when the unexpected happened. 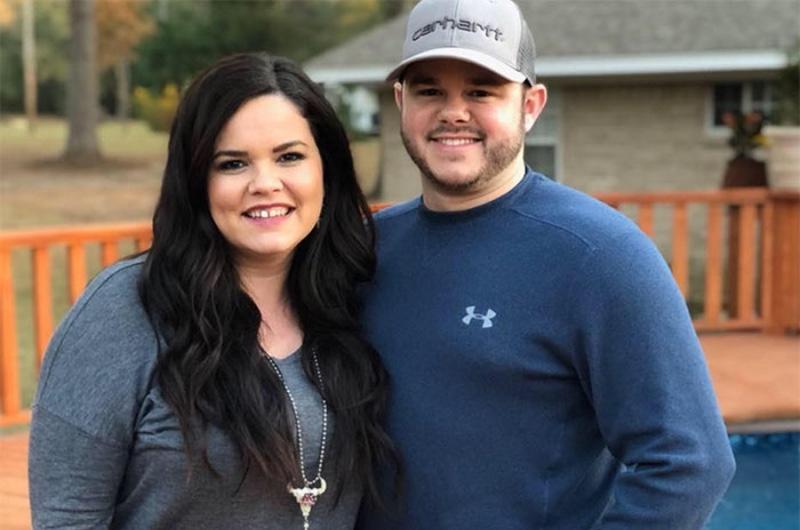 The legal fees for adoption were just too high for Cody and Kayla to afford. With the idea of adopting abandoned, they were still determined not to let go of their dream.

They began thinking about IVF, but if adoption was already too expensive, would this route be unfeasible, too? And what about Kayla’s condition? 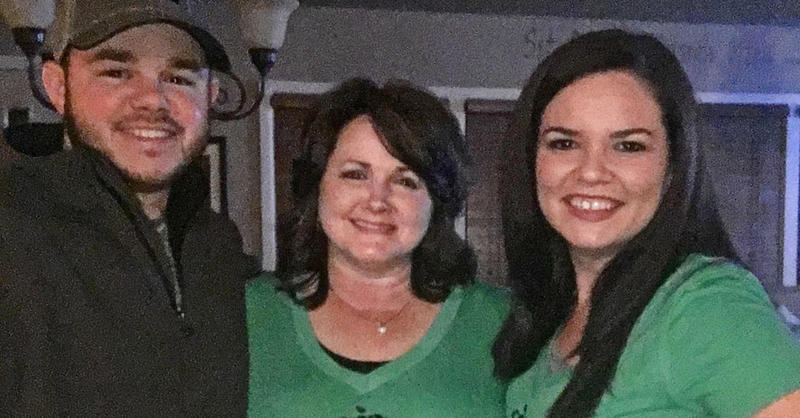 “At the age of 17, I had a partial hysterectomy. Doctors found a tumor that was believed to be cancerous taking over my uterus,” Kayla explained.

“My uterus was removed and the biopsy came back benign. My ovaries did not have to be removed so I am still able to have a child biologically mine, but I am unable to carry the child myself.” The couple began to think about their last remaining option; surrogacy. Kayla and Cody told Patty, Cody’s mom, and Kayla’s mother-in-low, all of their struggles with trying for a family. She had a great relationship with the couple and her heart broke for them.

When the couple decided to look into surrogacy, Patty was there to help at every turn. With Cody being her only child, she wanted nothing more than to have a grandchild of her own. Little did everyone know, just how much. 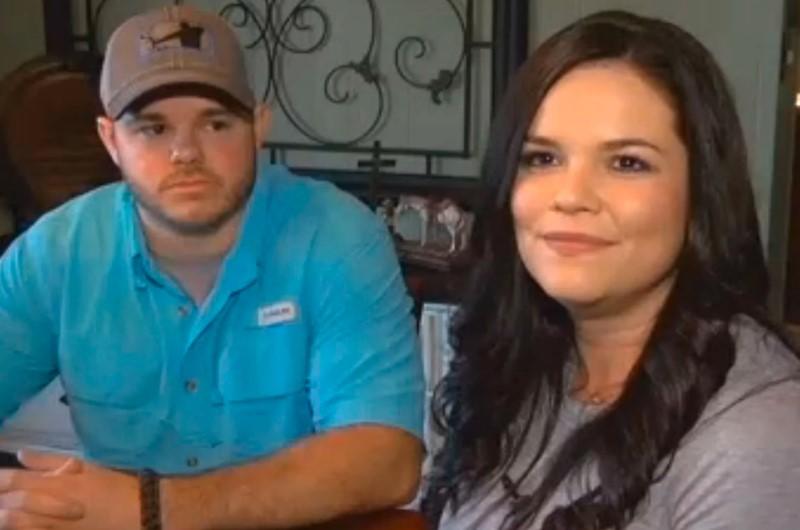 Kayla was extremely grateful to still have viable ovaries. But after a few tries with a few different willing surrogates, nothing worked.

After a few more of the surrogate options failed, the couple was forced to look a little closer to home for someone to carry their baby. But Kayla’s mother-in-law, Patty, wouldn’t hear of it.

The Doctors Advise Against It Kayla’s 50-year-old mother-in-law had begun to joke that she would be their surrogate, but it was only after a few other failures that they decided to take her offer a little more seriously.

At first, the doctors were skeptical because of Patty’s age. It was only after a battery of tests that she was given the green light. “After much testing, my mother-in-law was cleared to carry our baby,” Kayla said. 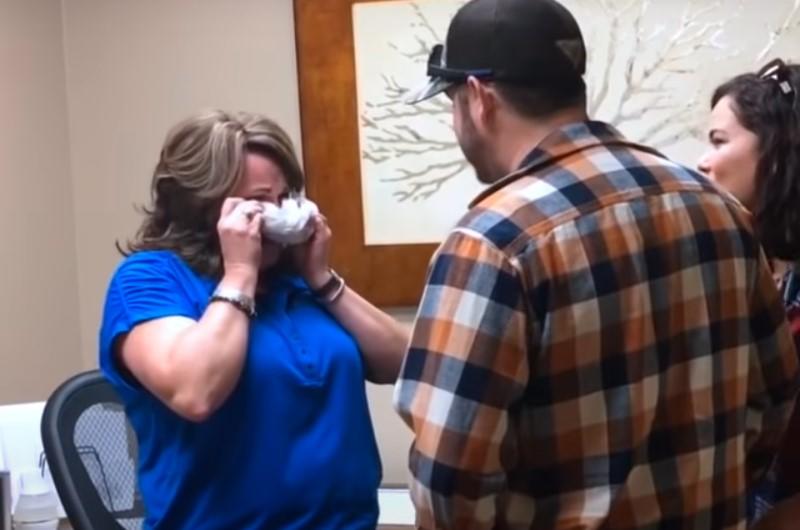 Kayla and Cody started the IVF process in October 2016 and had an embryo transferred to Patty’s womb in March 2017. Unfortunately, it didn’t take.

In May 2017, after another round of IVF, Patty left a urine sample on her front porch before she left for work. Kayla picked it up so that she and Cody could test it at home. Would they finally have good news? “I cannot describe the feeling of seeing two pink lines,” Kayla confessed. “I just knew it was going to work.”

After Kayla and Cody learned that they were finally pregnant, they decided to surprise Patty at work with the good news. “We told her we had not tested yet and drove to her work. We laid that test down in front of her and the tears started flowing.” It took a while for Cody and Kayla to come around to the idea of Patty carrying their baby but as time went on and at Patty’s persistence, they warmed up to the idea.

After all, who better to raise their grandchild than a woman they knew would love their baby as much as they did. But even though Patty passed all the medical examinations, they were still worried. Could something go wrong? Patty was 50 years old after all. She was perfectly healthy, but having a baby is a big ordeal and they wanted to make sure she was in top condition and was absolutely sure about her decision.

After the first failed attempt, they made sure she wanted and was fit enough to try again. But Patty was adamant, and it paid off. Fast forward to Dec. 30, 2017, and Kross Allen Jones was delivered by C-section, happy and healthy.

“I am so amazed at this sweet miracle. Having him via surrogacy was not always easy, and definitely not easy for Patty, but having him here makes all the hard days worth it.” And how did Patty feel about carrying her son and daughter-in-law’s baby for nine months? Patty said that the pregnancy sure wasn’t a walk in the park, but that she’d do it all again without a second doubt if she had to

Although having a family member as a surrogate is controversial, it can be easier financially, and it has obviously worked out for this family. Patty continued to say; “I’ve recently had the privilege of doing one of the most rewarding things: to carry my own grandchild for my son and daughter-in-law,” Patty confessed.

“This is something that has blessed not only me and my family but also Kayla’s family. A child is a lifetime commitment and I knew there weren’t two more deserving people than them. To see them with Kross and see the parents they’re already becoming thrills, my soul.” It’s not every grandmother who becomes a surrogate to their son and daughter-in-law but it looks like Patty has experienced no regret or health consequences.

Still, their case was very special and it is not recommended for a family member to be the first call for a surrogate, even though it may be cheaper and easier to manage! Kayla still can’t believe her luck and thanks her mom-in-law every day for the life-long gift she helped them receive.

Kross is a happy, healthy baby and was worth every pain, stress, and effort the couple endured to get to where they are now. However, how is Cody finding parenthood? Cody is still getting used to fatherhood but couldn’t be happier with how everything worked out. Their relationship has been through a lot and they came out stronger for it.

They encourage other parents who are struggling to conceive to never give up. Where there is a will, there is a way. Even if you don’t have a grandmother who can help you get there!