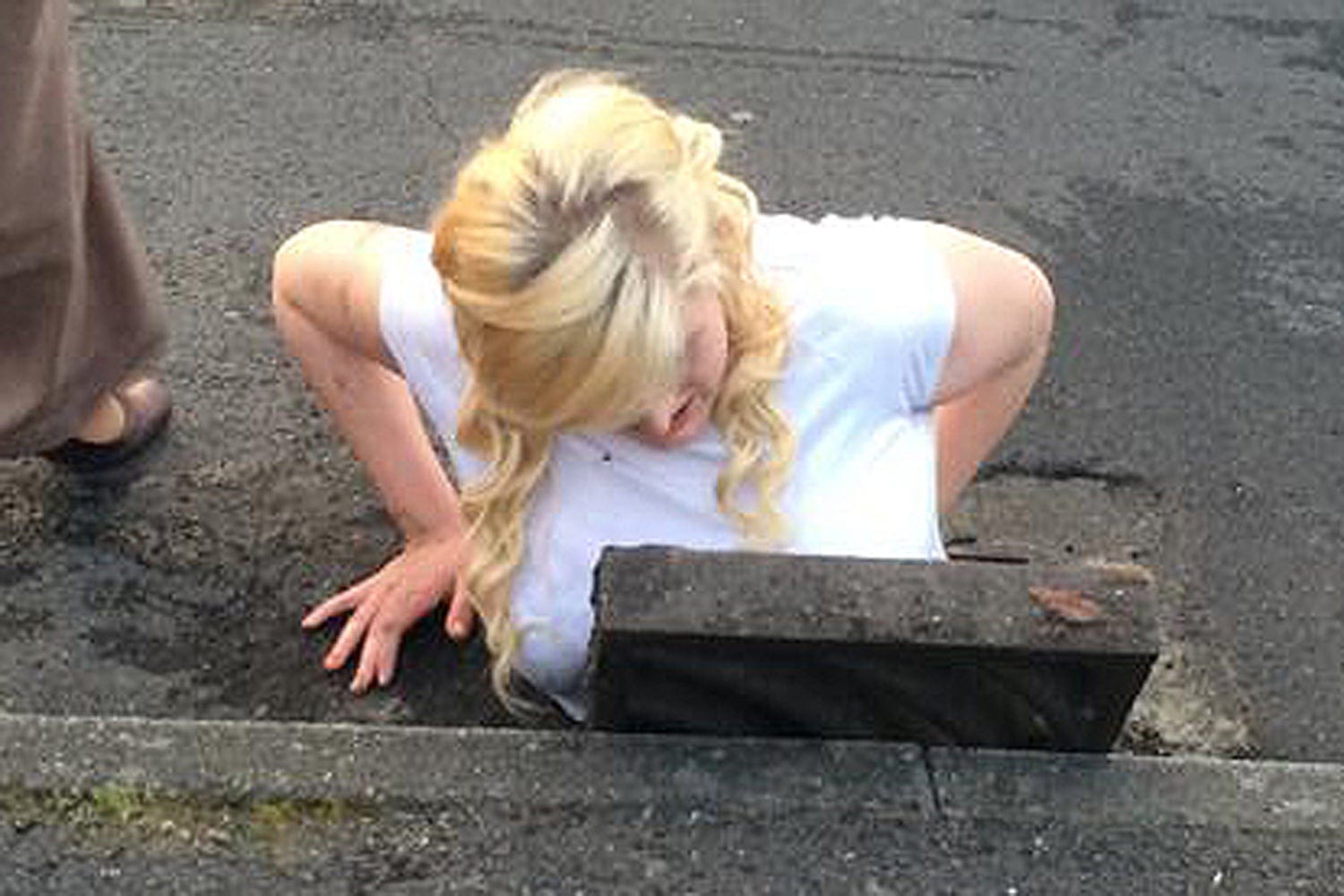 Waiting in The Drain 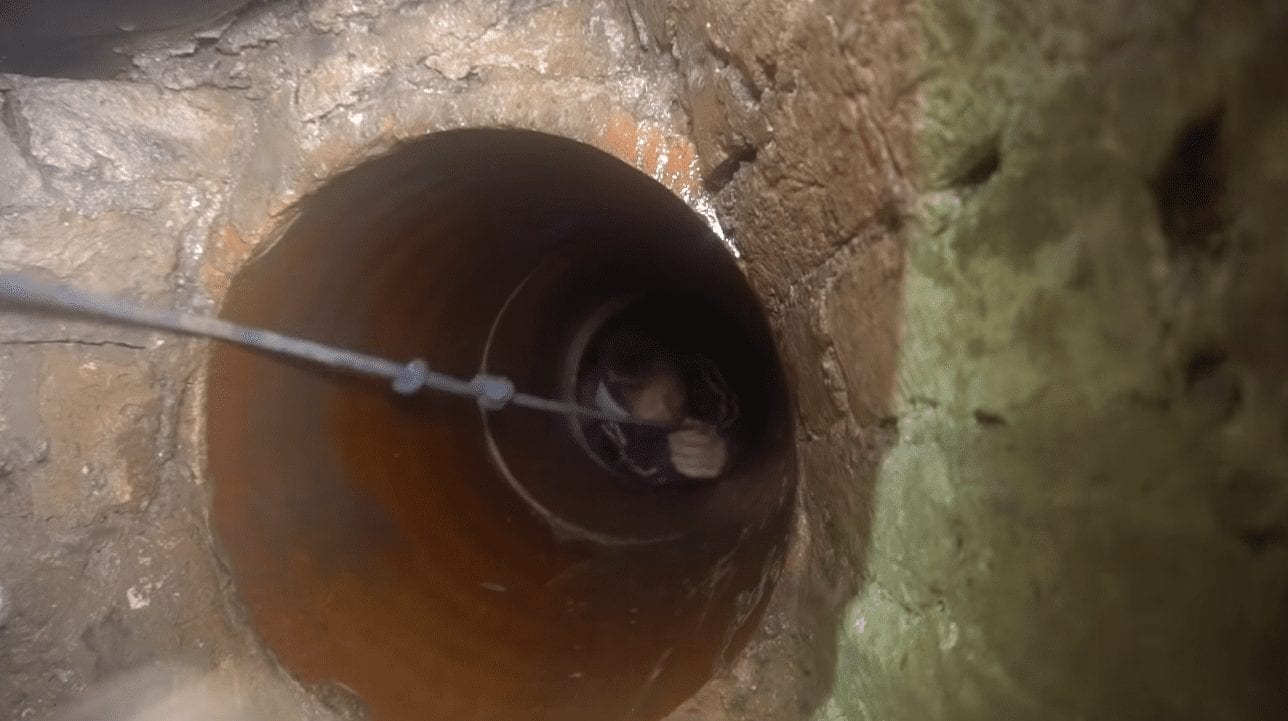 She got down on her hands and knees and crept closer to the sewer drain. Anyone with any sense would tell her that it didn’t end well for kids looking for things in drains, not red balloons or lost cats, but she didn’t know that, so she shimmied closer to the opening, never knowing the danger that was inching closer to her. 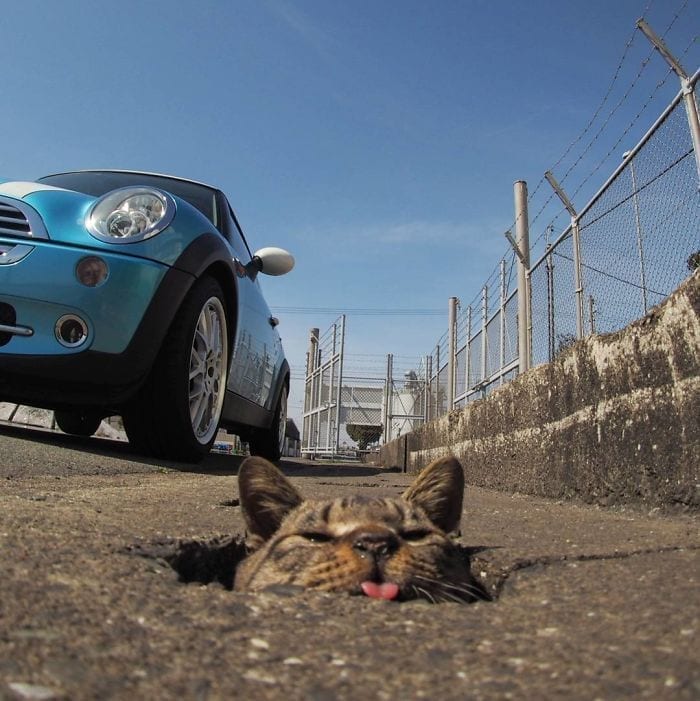 The girl was 12 year old Hannah Siler and she was indeed looking for her lost cat in her neighborhood in Pascagoula, Mississippi when she had decided that the one place she hadn’t yet looked were the storm drains outside her house. Somewhat, fortunately, her cat was not in this particular drain but something else with glowing yellow eyes was, and it was looking right at her. The family cat had not come home for dinner the night before and Hannah was beside herself that he was lost and would never return home. Despite reassurance from her dad and stepmom that he was probably just out catching mice or asleep somewhere in a shady spot keeping out of the midday heat, she insisted on going on a search for her beloved kitty. 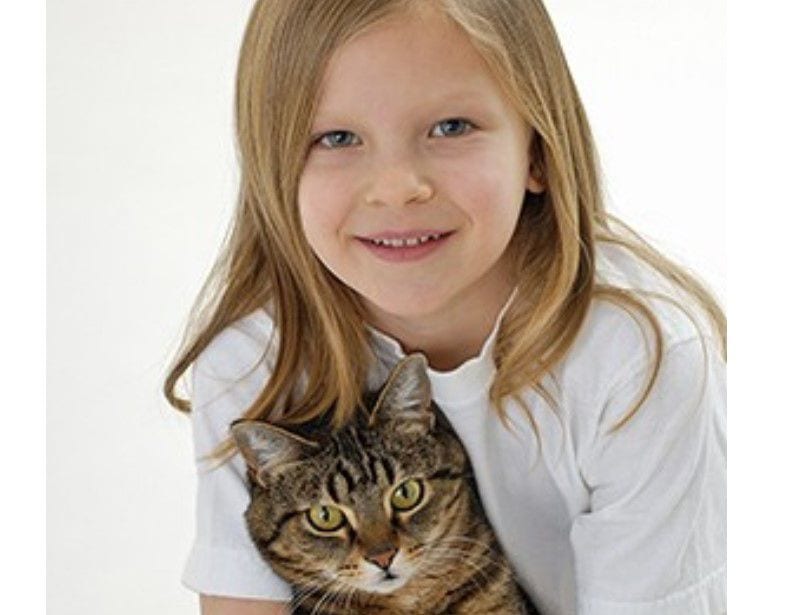 Hailey, her stepmom, agreed to accompany the tween on her search of the neighborhood, hoping that they would stumble upon the cat nearby and they could get out of the baking sun sooner rather than later. They looked up trees and in bushes but no sign of the feline was just upsetting Hannah more. Hailey knew that they had to find the cat soon or Hannah would be upset for weeks. 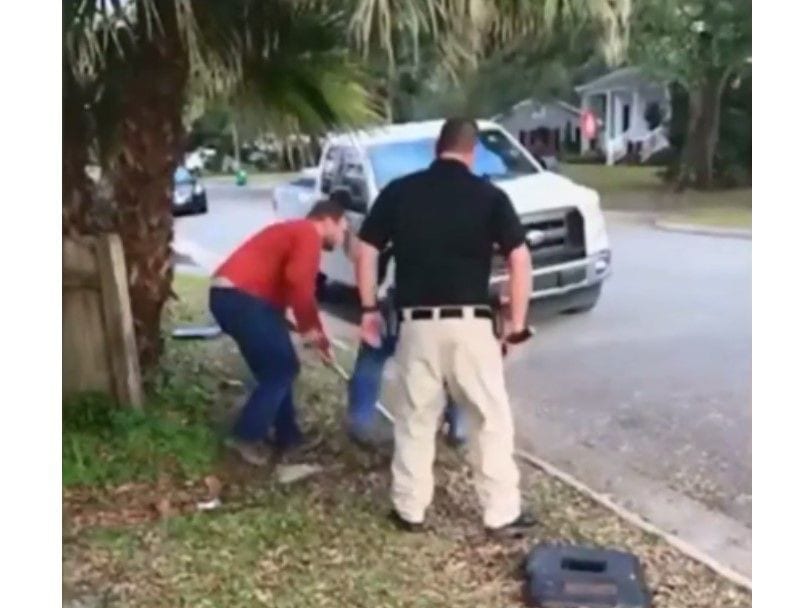 As Hannah creep closer to the dark storm drain she knew it was too big to be her cat but the eyes were so captivating that she found herself wanting to know what kind of creature was hiding right outside her bedroom window just a hop, skip and a jump away. What else could have beautiful eyes that all but shone in the dark? 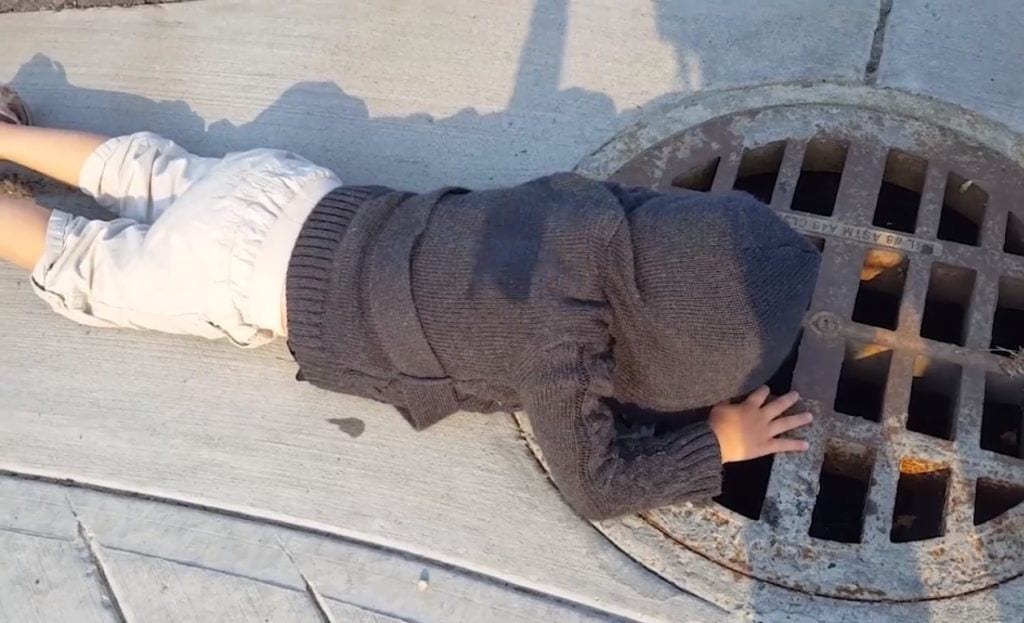 Luckily Hannah didn’t get too close, but she was close enough to see that the huge animal was wedged and stuck in the drain, facing straight up. It was doomed if the girl hadn’t stumbled upon it. She called to her stepmother nearby looking down a different drain to come and see what she had found. She was about to give that woman the fright of a lifetime. Hannah called Hailey over to investigate what she had found in the storm drain, and she looked inside to get the fright of a lifetime. There, peering out of the drain was an eerie pair of yellow eyes. Nothing could have prepared Hailey for what was creature was lurking there, in the darkness. 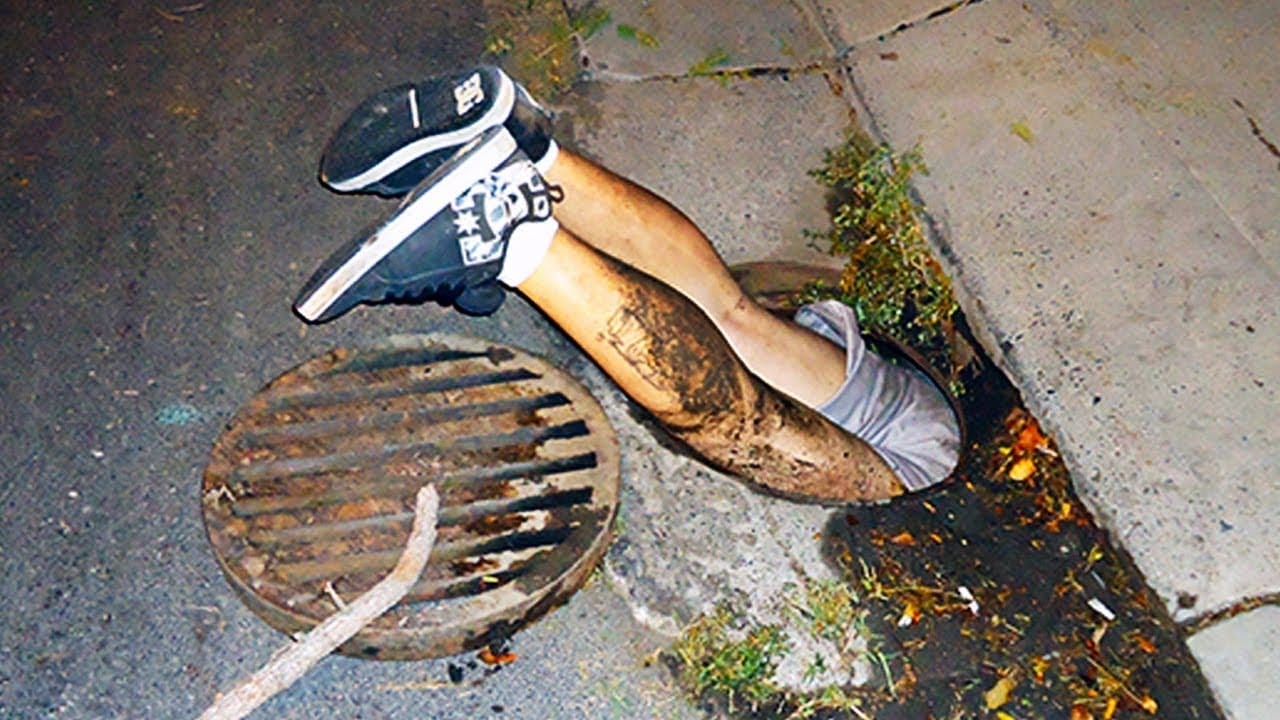 Hearing her screams, Hannah’s next-door neighbor, Brooque Snow ran outside and joined the growing group of people peering into the drain, the reaction was always the same – a double-take and a hasty movement towards their phone to snap an unbelievable picture. It took a few bewildering moments before Brooque thought to call animal control. Hannah piped up: ‘I was kind of surprised that it was in the sewer drain. I yelled for my neighbor to come look.’ when asked about the events of the day. 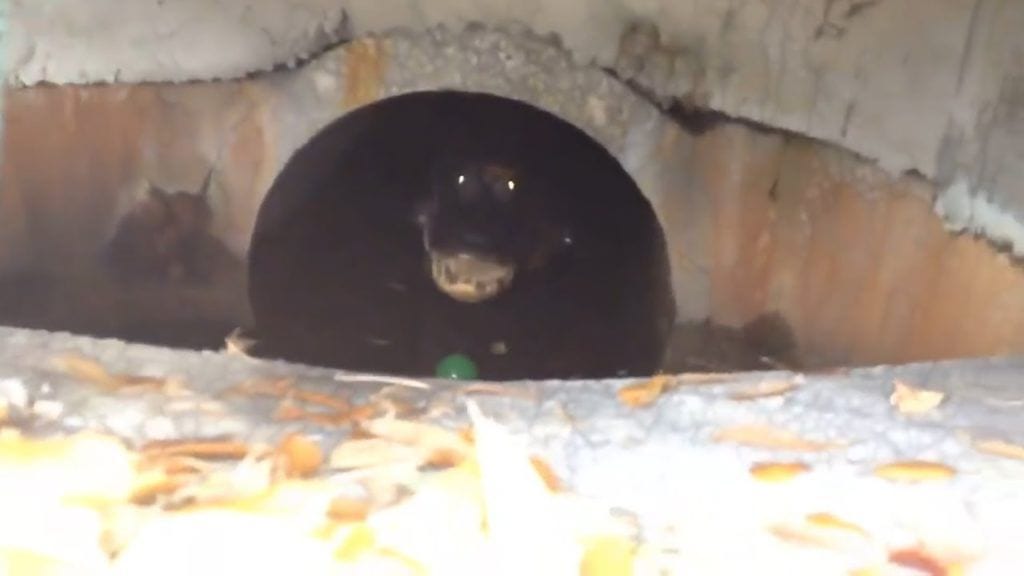 Adults kept curious children away from the storm drain while animal control officials were on their way to the scene. The neighborhood was teeming with youngsters playing outside on the hot Mississippi day. If Hannah hadn’t spotted the creature, who knows what could have happened to any one of the kids living in the area? 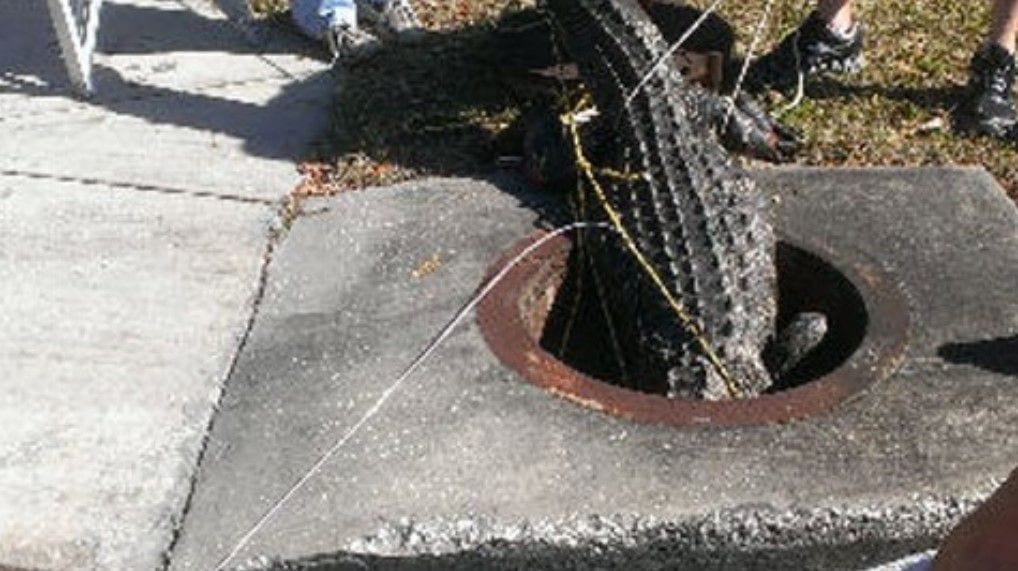 What she found instead of a tame kitty was actually an alligator more than 7 feet long. “We looked inside and there was an alligator,” Brooque said. “At first were like, ‘Wait a minute …’ so we took a second glance. “Then I took out my phone took a picture and I told the neighbors.” The alligator gave the family quite a shock. 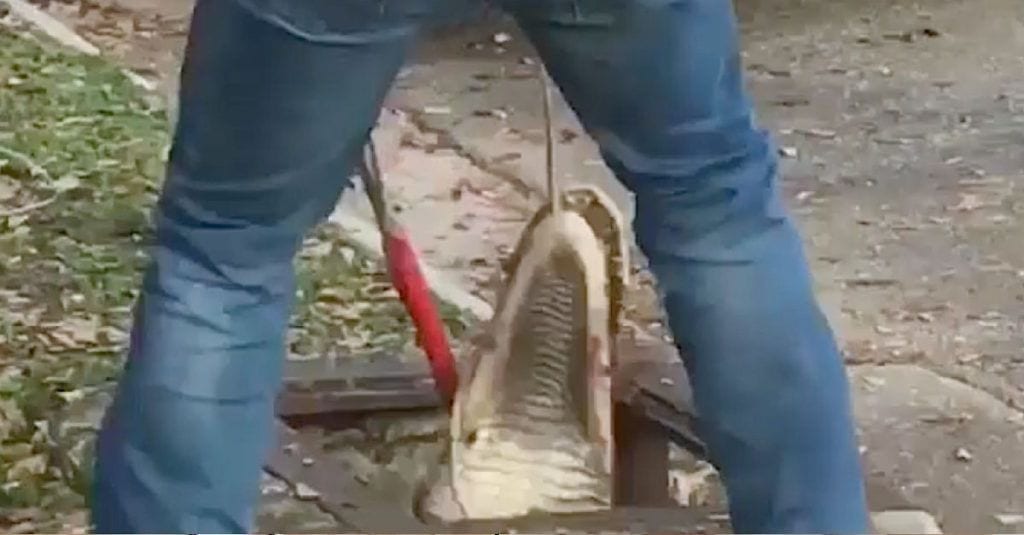 Finally, animal control arrived on the scene and upon further investigation realized that they were out of their depth. The gator was just too big to get out of the awkward space without specialist equipment, so animal control called in a pair of professional trappers to assist with the capture. It wouldn’t be easy. An alligator of that size, 7 feet, weighs in at roughly 200lbs and this one was stuck vertically in the drain. The two strong men were professional trappers for a reason, they were really good at what they did. After securing a poled snare around the neck of the animal the begin to pull it up through the small opening at the top of the manhole. This had become a full on alligator rescue mission. The men pulled as the gator thrashed and death-rolled to shake itself free of the snare then began snapping its jaws to try to break free. They carried on, unperturbed by the prehistoric animal’s attempts at freeing itself. What felt like an eternity was actually a relatively quick procedure. Now came the dangerous part. Laying the reptile on the grass the trappers now had to get up close and personal with the mammoth beast in order to restrain its short but powerful legs and of course to wrap his most dangerous weapon shut. If they could manage that then it would be safe to transport or move him wherever he needed to go. With smooth confident movements borne of practice and experience, the trappers mounted the alligator and easily secured him so that it would be safe to move him. With a quick lift, they loaded the gator onto a van, ready to be released beyond the city limits into a marsh nearby. Doug Adams, captain of the Pascagoula Police Department, said Ms. Snow was right to call animal control. “You don’t want to feed the Gators even if they’re in your yard. You don’t want to try to trap them yourself,” he continued in a statement. The poor animal as covered in sores from its time in the sewer and no one knows how long he could have been trapped down there. Pascagoula Police Captain Doug Adams said: ‘We have a lot of alligators around Pascagoula because we are surrounded by water. But it’s unusual to get one in a drain pipe. It was unfortunate it was there in a way, but it was also fortunate that it was there and not just roaming people’s yards. Thank goodness the child saw the alligator because otherwise, it would have died in that sewer. We have no idea how long it was in there. Our licensed trappers released it into the wild.’ According to the station it was successfully released and after the excitement had died down city officials and residents alike began to share pictures and videos on Facebook. Some people got some pretty great footage of the entire capture, such as Trevor Hodgins, 18, a student at Mississippi Community College. He said: “I was frightened but I’ve dealt with alligators in the past. We live in the South. We see alligators pretty often but I’ve never seen one in a sewer before.” A few of the comments from the videos range from the sacred to the quite funny; “Momma can you believe this was lurking so close?!” One scared resident posted to her mother. Another asked “Please name him Pennywise,” referring to Stephen King’s horror clown character from the book IT who in one scene scarily lurks in a drain. Anyone who comes across an alligator should make as much noise as possible and move away from the animal. If unable to escape an attack, people should fight back by poking and hitting the alligator’s eyes– this is the advice given to all people in the area when encountering an alligator. Or Just run for your life!
Must Read
Genome Studies Manage To Find A New Branch Of Fungal Evolution
European Space Agency Budget Increases By 10 Billion For The Next 3 Years
Artemis 1 Finally Launches: What It Means For Space Travel And Exploration