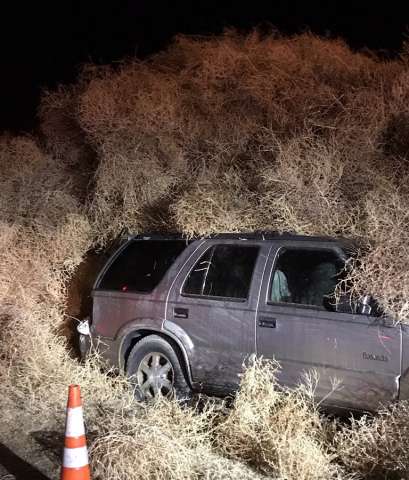 The word ‘tumbleweed’ generally conjures up images of wild west towns and cowboys. Two gunslingers standing in the main street, onlookers cowering in fear, harmonica music playing, a tumbleweed rolling through between the two men as they face-off. What you probably don’t think of is a modern paved road where the tumbleweeds can be found eating cars. This, however, was exactly the case for some unfortunate drivers on New Year’s Eve.

Origins of the Tumbleweed

While most people link the tumbleweed to the American West but the truth is that the tumbleweed actually comes from a region of the Ural mountains in Russia. Ships that transported flaxseed to America in the 1870s are most probably responsible for introducing the plant to America. The plant, which is actually called a Russian Thistle, thrives high and hot dry climates. This is why they flourished in the plains states of America. However, tumbleweeds are found all over the world. Even in places as far-flung as New Zealand.

Generally, tumbleweeds grow up to 3 feet tall. At this point they dry out the wind snaps the stem and blows the tumbleweed all over. While the tumbleweed us being blown about, it releases about 250,000 in its wake. It is during this time that you will see one of these plants dance across the road. Hitting a tumbleweed is generally nothing too serious, but on New Year’s Eve, emergency responders found a different view awaiting them.

A huge tumbleweed, as long as three football fields obstructed Highway 240. “In 20 years on the job, I’ve never seen anything like this before,” Washington State Patrol trooper Chris Thorson told the papers. As the photos show, entire cars were engulfed by this monstrous block of tumbleweed. It is assumed that winds of up to 50 mph must have been blowing to transport this huge tangled mess. The emergency workers spent 10 hours trying to clear the road and even needed to call in the help of two snowploughs. Even so, the emergency responders had a good sense of humour. “We’ve unofficially dubbed it ‘Tumbleggedon 2020,” Thorson informed interviewers.