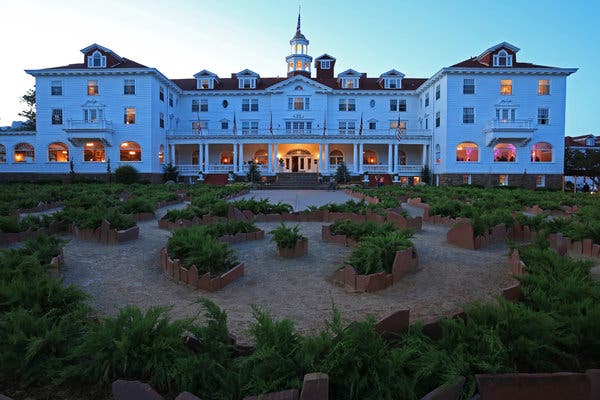 The Stanley Hotel in Estes Park, Colorado is well known as the inspiration for the Overlook Hotel in Steven King’s The Shining. It is also well known for being haunted and there have been many claims of guests seeing and experiencing strange things. One recent guest may, however, have given us the best evidence of this yet.

Henry Yau visited the famous hotel recently and snapped some photos to commemorate his trip. It was only when he looked back at the photos that he noticed something unusual. According to CNN: “Tourist Henry Yau recently took a picture at the Stanley Hotel in Estes Park, Colorado, which appears to show two ghostly apparitions standing on a staircase. In the photo, a woman can be seen at the top of the stairs in a period outfit with a child beside her.” The photo has caused quite a stir online with some people calling it proof and others calling it nothing more than a photographic glitch. But which is it?

Several people claim that the figures in the photo appear to be dressed in elegant black dresses which would befit an upscale hotel such as the Stanely. Many point out that the clothing of the figure lends an air of authenticity to the claims that it shows specters. Yau himself says that he doesn’t remember anyone being there, having specially waited until no one was there until he took the photo of the grand staircase. This is also not the first time an apparition has been photographed at the hotel.

However, many other people have examined the photo and think that it is simply a double exposure. One internet blogger noticed that the photo was taken in panorama mode and this may offer an explanation. “Panoramic images are not taken in the same fraction of a second as a normal images are. They take several seconds … which would allow Yau to start taking his panoramic image at one end of the room, and another guest or two to hit the halfway point down the stairs, turn the corner, and begin the second set of stairs to the floor as Yau ends his panoramic image on the other side of the room,” Kenny Biddle of the Geeks & Ghosts podcast claims.

Despite the likelihood of it merely being a photographic artifact, opinions have still been varied. Ultimately we will never know and need to decide for ourselves. Has the Stanley hotel officially offered us a glimpse into the world of the paranormal?