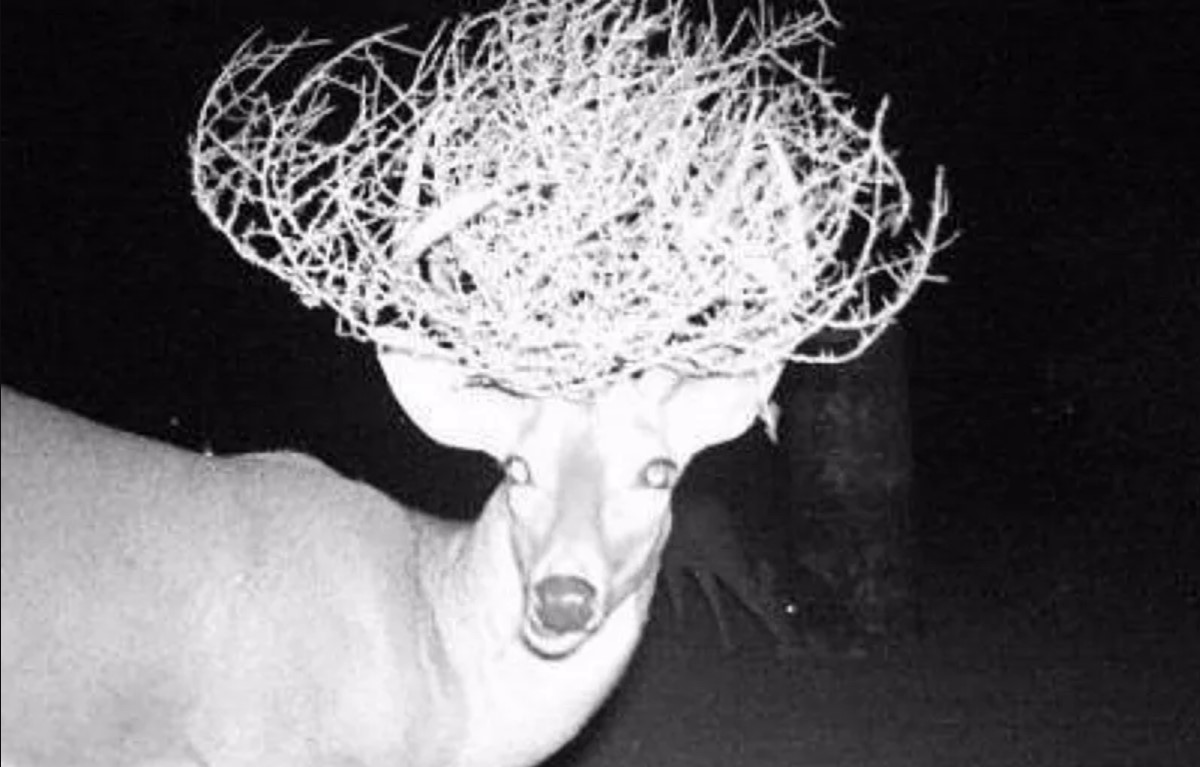 But seeing these animals when they aren’t around humans can be quite strange. Once in a while something weird or truly amazing can be seen on one of these trails. And we’re going to show you the best parts of them. 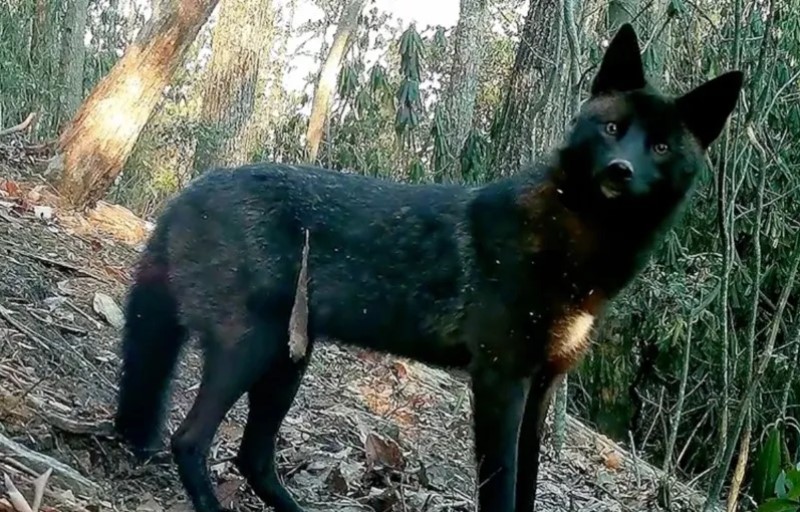 This little guy must have some amazing hearing!

Why? Trail cam do make noise, but it’s so quiet that it usually doesn’t attract attention from the wildlife it’s trying to film. The look on his face is priceless. Like, “Excuuuuse me! What do you think you’re doing?!” 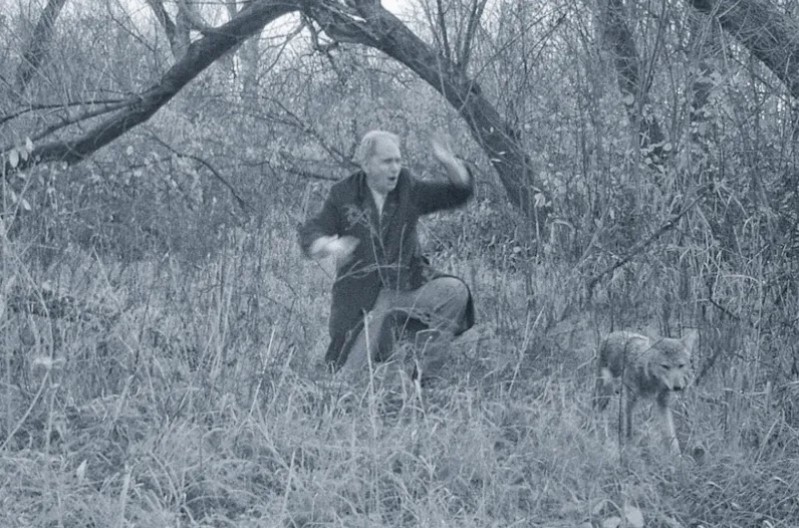 There aren’t many reasons that would explain a man chasing after a wild canine.

Maybe he was trying to scare it off his property? Perhaps it was meant to be funny/staged? Who knows. But it certainly invites so many questions. 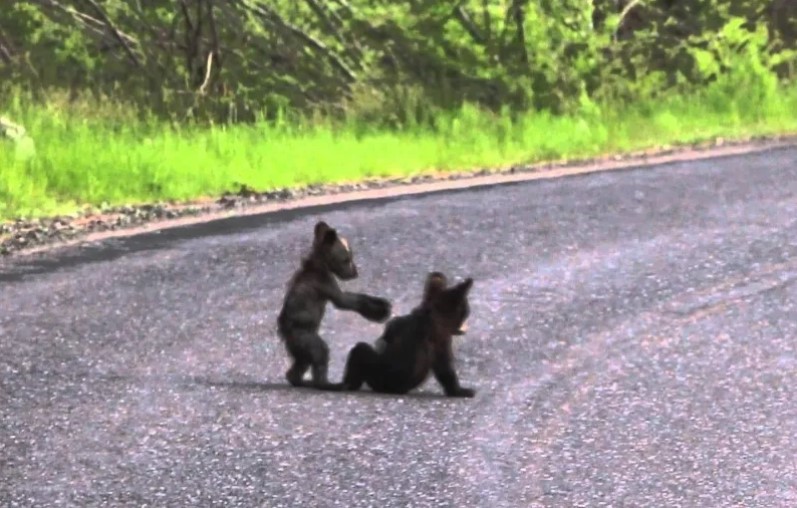 These baby bears decided to have some fun … in the middle of the road.

Cams are also put in places with animal crossings just in case there are accidents etc. This moment ended up flying across social media because the two cubs brought busy traffic to a grinding halt until their mom carried them away. 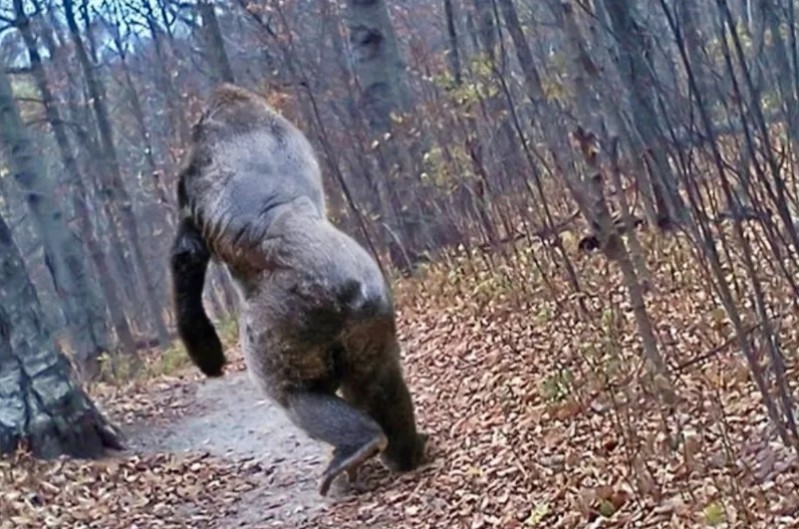 The best place to put these gizmos is anywhere there could be higher “foot traffic”.

Although someone thought it was funny to take this image of a bear and tweak it to look like something that would grace the front page of the National Enquirer. 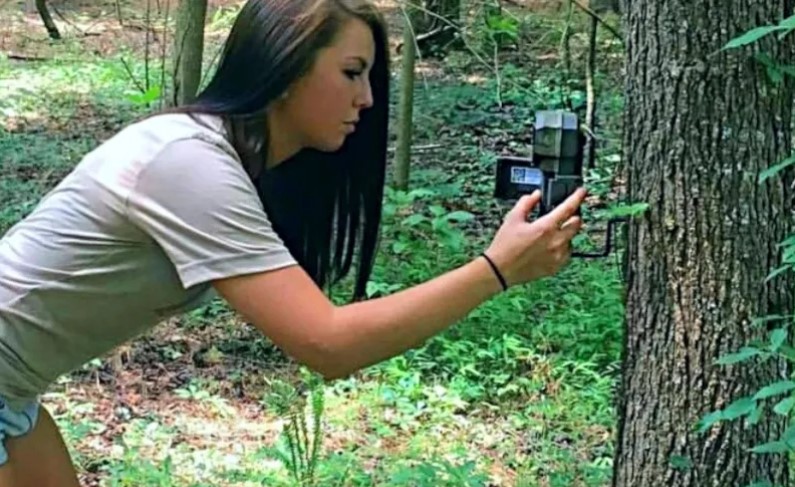 Trail cams run 24-7 and are on a motion detector.

They can hold insane amounts of footage. Also, there are different levels of infrared – no glow, low glow, and red glow (all of which serve a different purpose). But the great news? It doesn’t take a tech genius to work them. All it takes is some research. 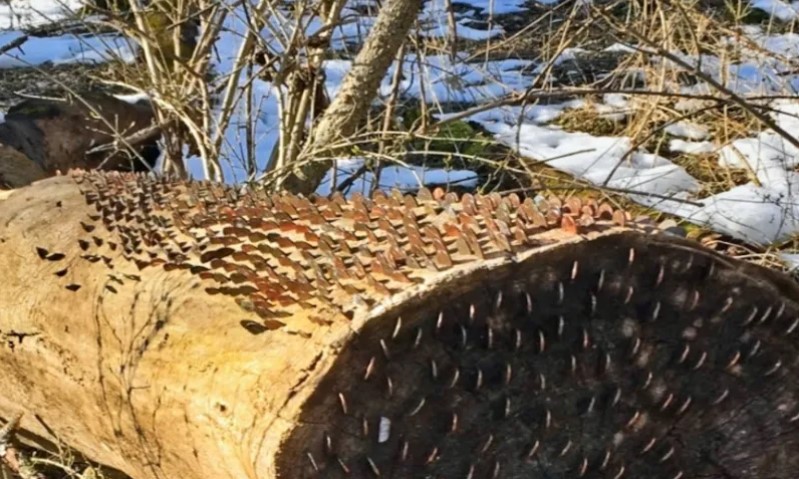 These aren’t just for filming animals.

They are also used for security or general monitoring. They are great for areas that maybe need a bit extra “big brother” attention. Or, they can be set up in places where strange things happen, in order to find out the truth. 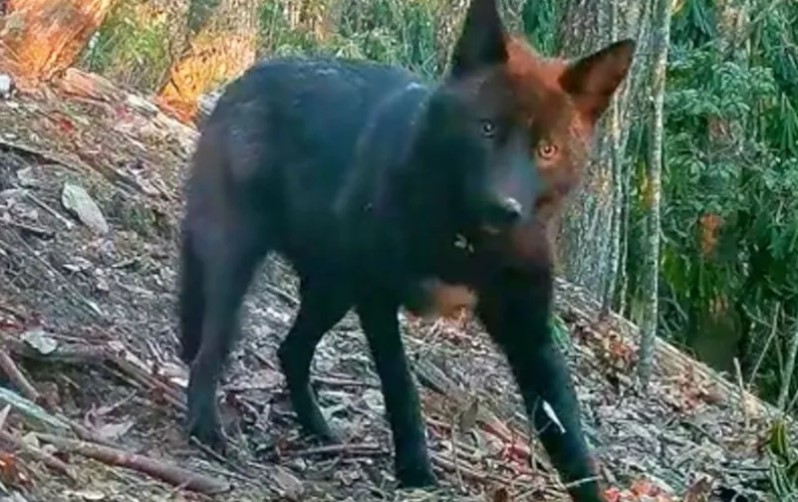 Don’t let the flashy megapixel numbers fool you. These features are better to ponder and compare. Especially if someone wants images like this guy inspecting the camera. Many people think that a trail cam with more megapixels is good.

That’s actually not true. The big numbers are just an advertising gimmick to boost sales. Most cameras (as of now) are 4-5mp – the rest of the image is extrapolated. Besides, there are more important features to consider when buying one.

One Of These Things This is a “famous” photo that claims to have captured a “ghost girl” walking around a clearing at night. Either it’s photoshopped, staged, or someone’s parenting needs to be questioned. 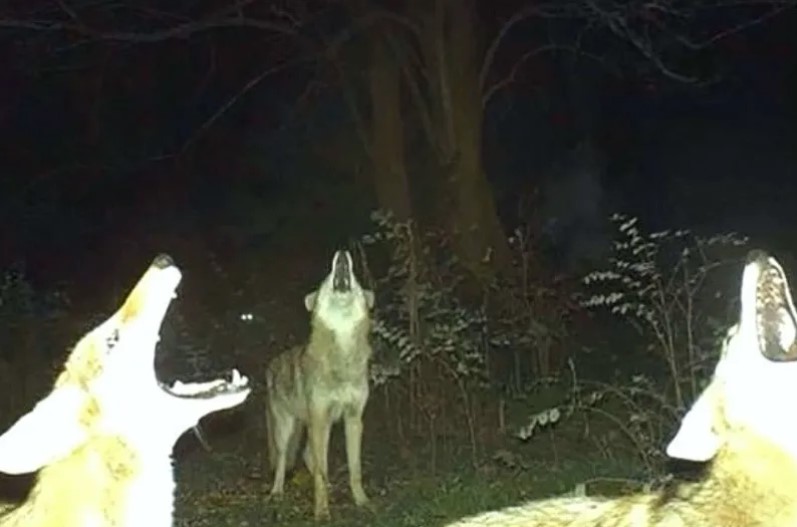 No humans allowed at this party.

Evening animals howling at the moon, or each other. It’s quite beautiful. Some models can capture audio (which in this case would be amazing), but it won’t store as much video if audio is bulking out the memory storage. 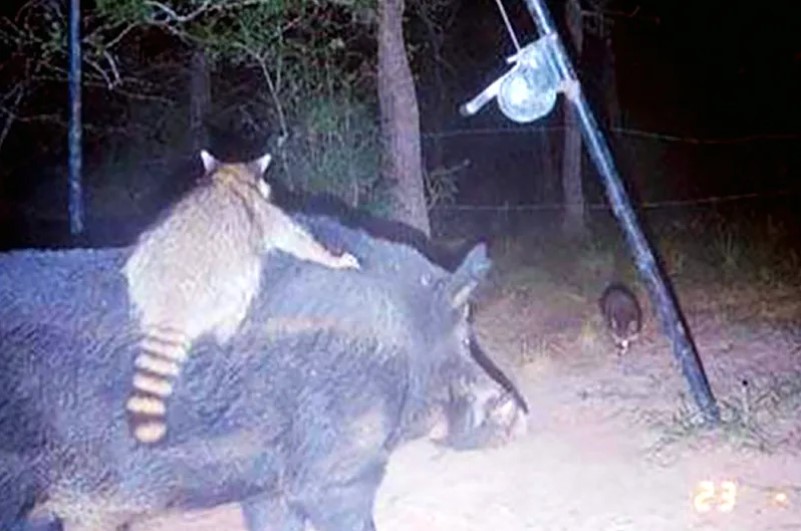 It’s the new version of Timon and Pumba.

Who knew a wild boar would be cool with a raccoon hitching a ride! The other buddy is foraging in the background. This is a clip most people would want to see the rest of! Most people might connect trail cams to North American wildlife.

But gadgets such as these are invaluable when it comes to monitoring animals all around the world. It might not be National Geographic quality, but they are images that anyone can get. Bonus points because they are excellent for security around places with endangered species. 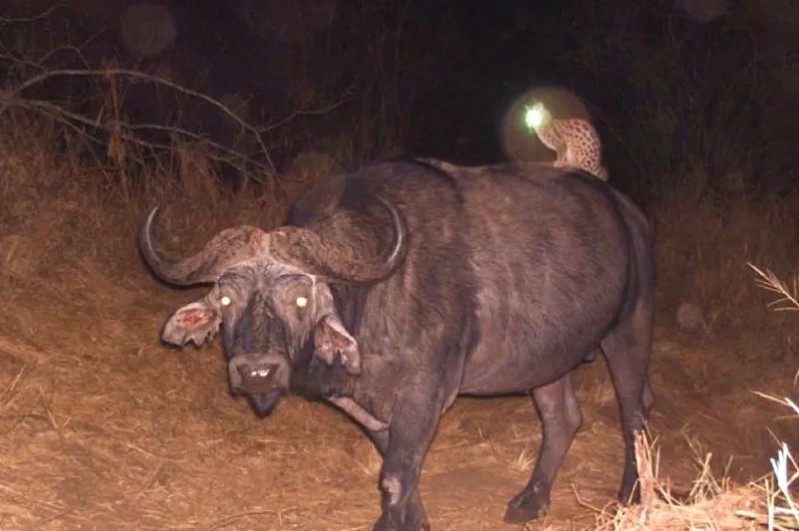 This water buffalo doesn’t seem to mind being used as a taxi service. Although perching on top of someone bigger than you is a great deterrent from anything with sharp teeth that could see you as a meal. There is “big dog syndrome”.

But this images captures the idea at a whole new level. What in the world did this deer do to tick off the owl to the point of attack?! The funniest thing? This doesn’t even make the first-place pedestal when it comes to size exchange. Trail cams are perfect in winter.

No one wants to sit out in sub-zero temperatures for hours on end. The extra quite environment is also hard to prowl around in. It becomes possible to capture majestic images like this. Jungle are another extraordinary place with a plethora of wildlife that might be tricky to take pictures of. The cam casing are very sturdy can take cake a beating from some of the more aggressively curious visitors. The “big dog syndrome” gold metal goes to the crazy squirrel who, for some inexplicable reason, decided to pounce on this unsuspecting deer. One can only wonder what the final outcome was. Baby bears aren’t the only ones that will set up camp on the road.

During mating season, big boy bears don’t care where they get into battle. The Department of Natural Resources and Protection has endless house of wildlife footage from trails and highways. A big rack on a male deer might be hot in the animal world.

But this guy might have taken things a little too far. Although, by the look of his prickly crown, maybe it has some defensive value too? Smart cookie.