You Had One Job

“Measure twice, cut once,” or so the expression goes. But it’s probably fair to say that these construction fails involved exactly zero measuring.

In fact, most of them seem to be the product of zero thinking – especially the one at a school where you would think they’d want to set a better example. 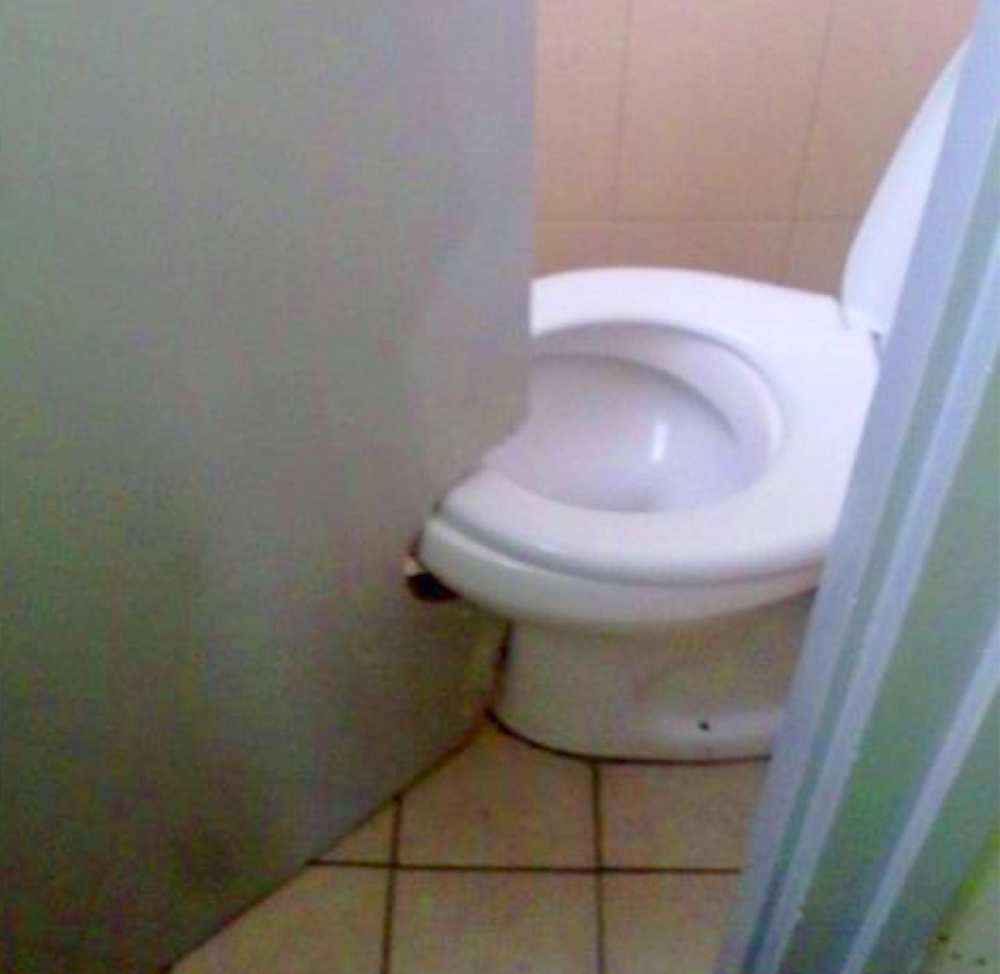 When you’ve made a mistake a work, it’s usually best to take a step back and assess what went wrong before you make it worse. Or, you know, commit to the terrible error you’ve made and cut a toilet-shaped hole in the door with a blunt chainsaw.

Maybe the worker responsible was just really desperate to go. In which case, he probably should have just used these urinals next door. Oh, wait… 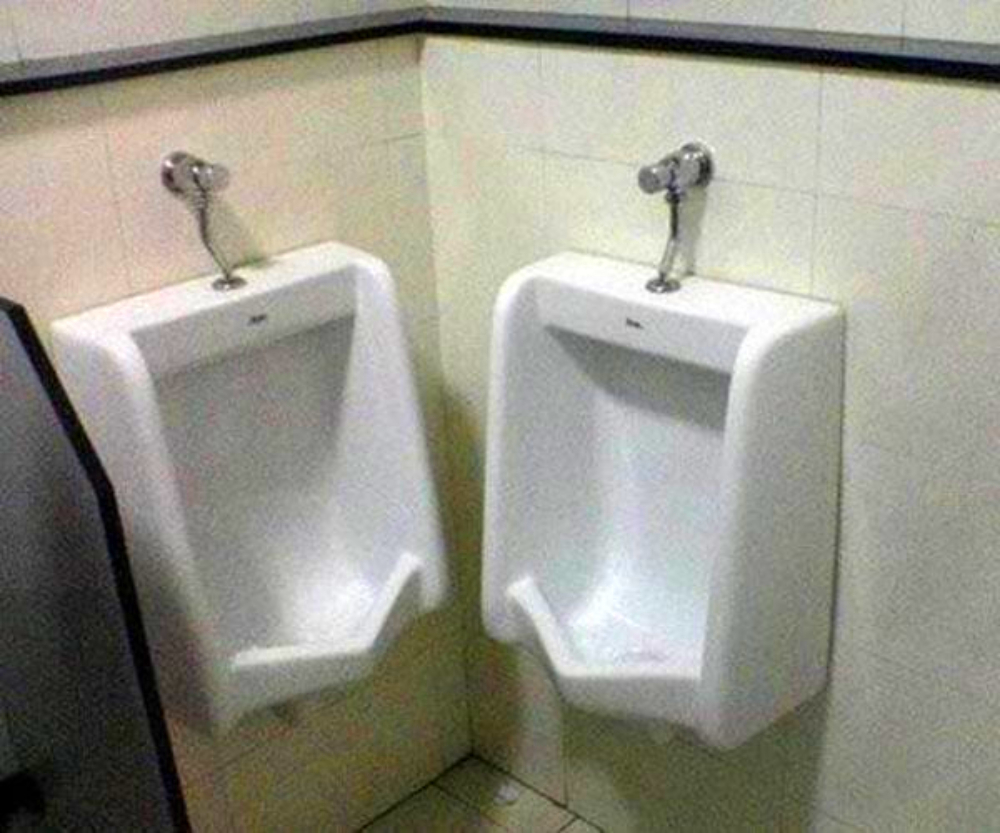 It’s a commonly known fact among men that there is a certain etiquette to using public urinals. For example, in a row of five, the first man takes one of the end urinals, then the next person stands at the one on the other side, the following guy uses the middle one, and, in a worst-case scenario, urinals two and four are subsequently occupied as well.

This plumber did not get that unwritten memo. Guess he was probably too busy consulting whatever handbook says that this is how to build disability access ramps. 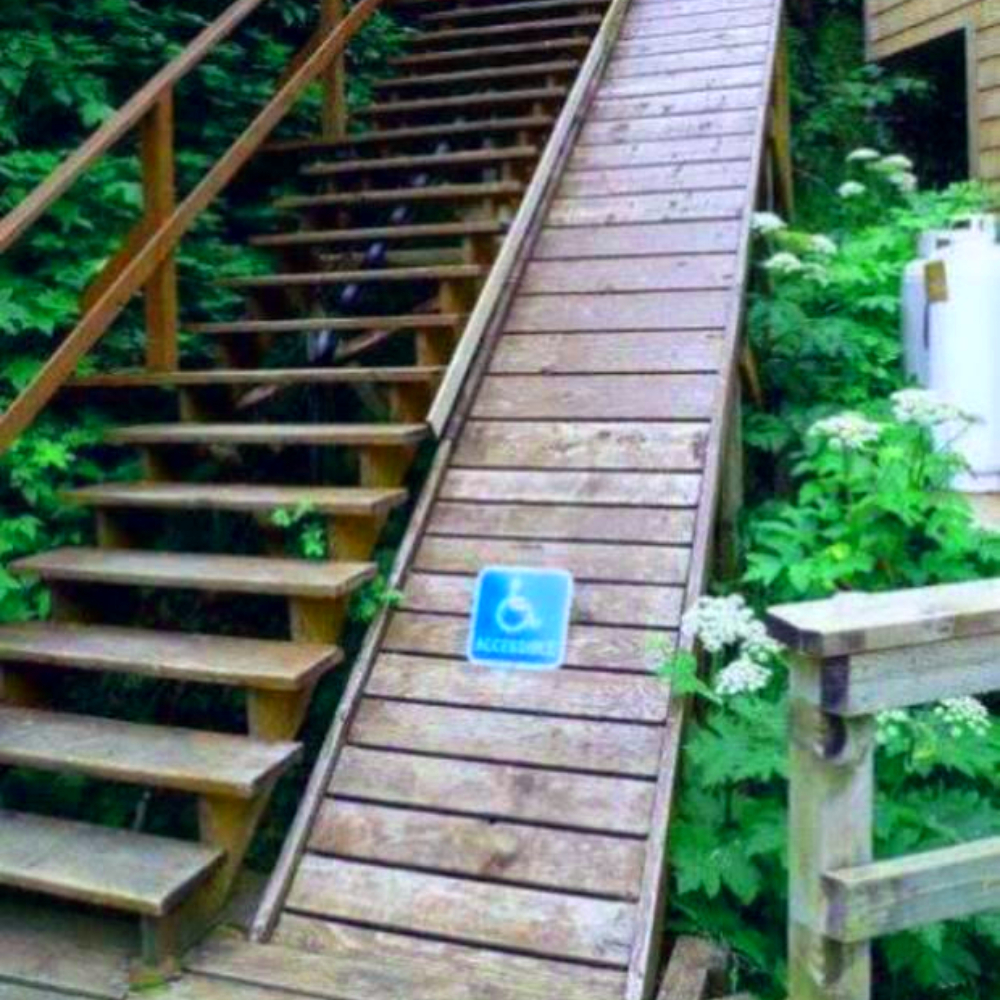 OK, so technically, with enough suspension, a crash helmet, and perfectly calculated velocity powered by arms twice the size of Dwayne “The Rock” Johnson’s, a wheelchair user might just make it to the top of this ramp.

However, it may have been more accessible if it were built by the same construction company that installed this security door. 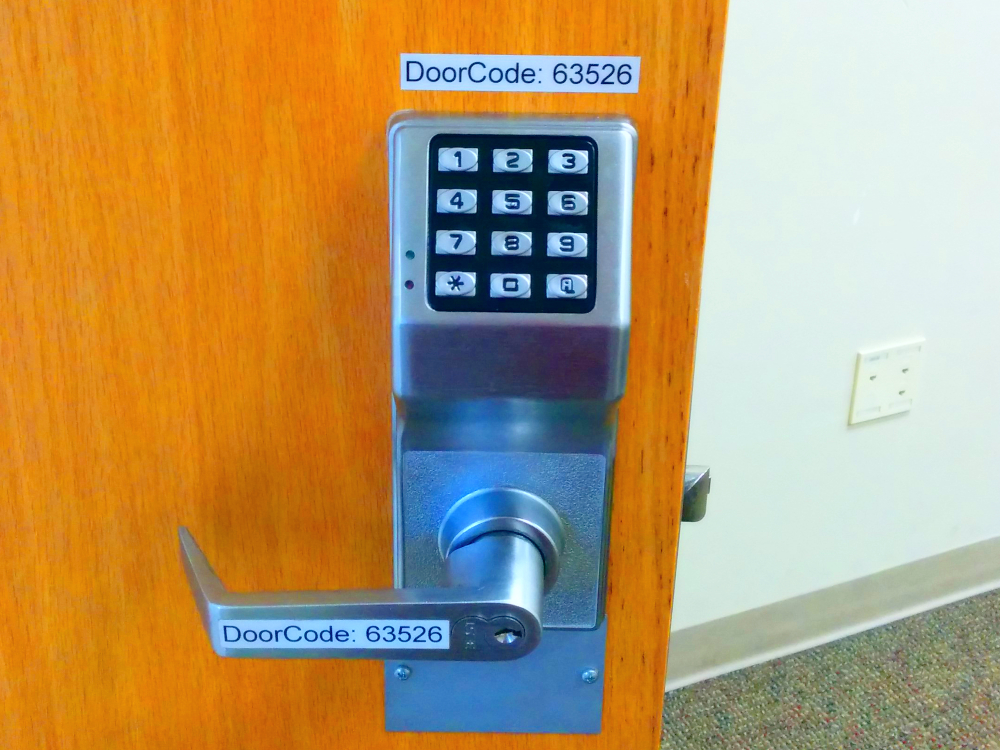 Remember that episode of “Friends” where Joey admits he scratched his PIN number on the ATM down the street from their apartment?

Well, this is that, but dumber. Because at least it wasn’t abundantly clear to would-be thieves that it was Joey’s account. Maybe they should have taken a leaf out of the next builder’s book on how to keep things safe. 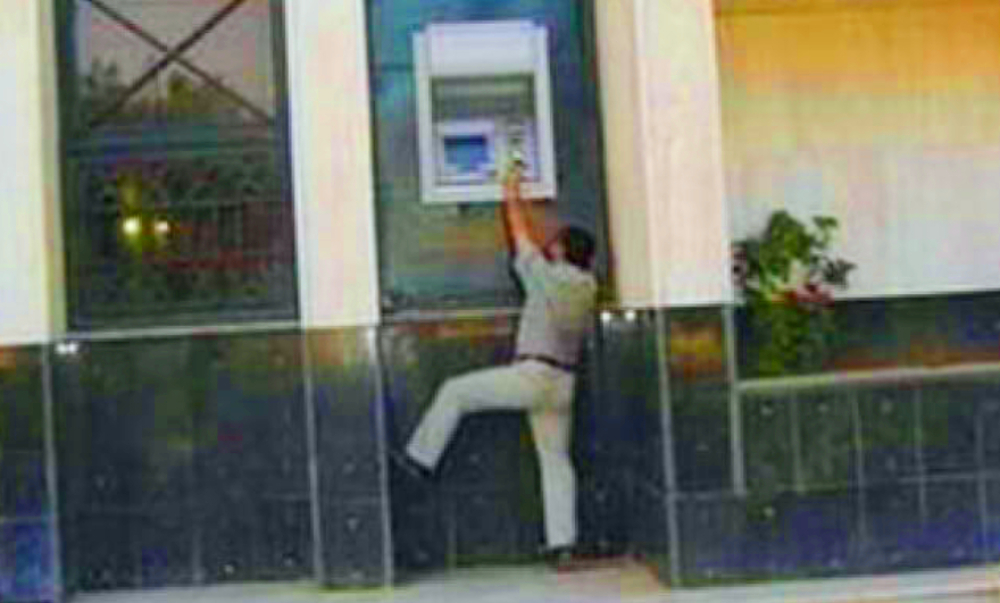 Some banks advise that you cover the keypad when typing out your PIN. Others might suggest you go into the bank to withdraw cash when possible. But this bank took things a step further by not only keeping its customers’ cash out of the hands of criminals, but also out of the hands of their customers too.

Pretty sure they had something to do with this impossible soccer field too. 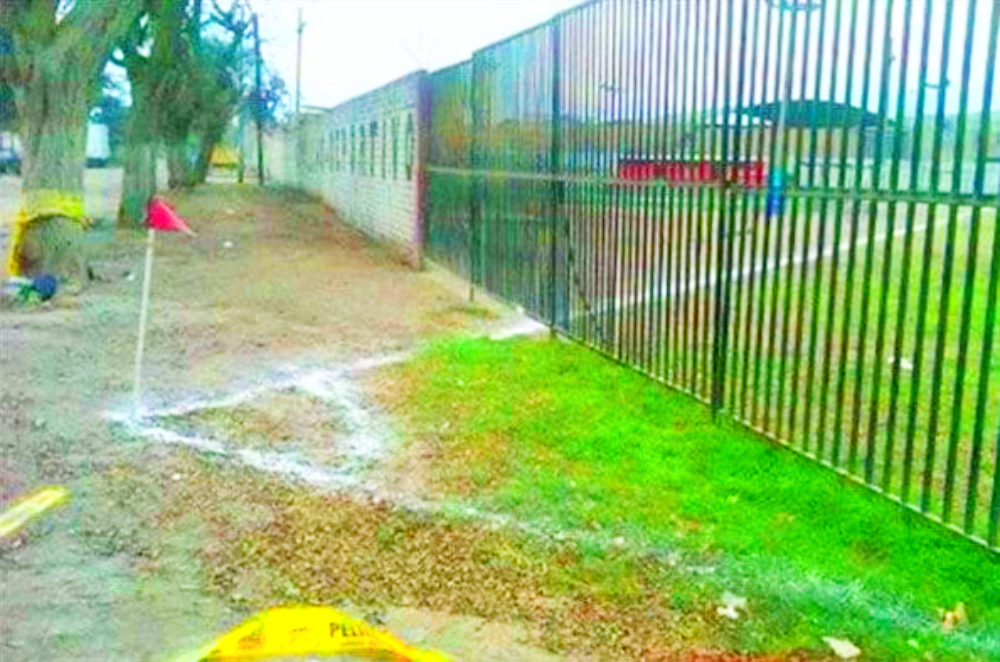 Nah, the chances of players needing to take kicks from all four corners is pretty unlikely. And if they really need to take one, they’re athletes; surely a little high jump isn’t out of the question.

But getting your boots caught on a metal fence is nothing compared to what this construction team thought would be an acceptable spot for children to play. 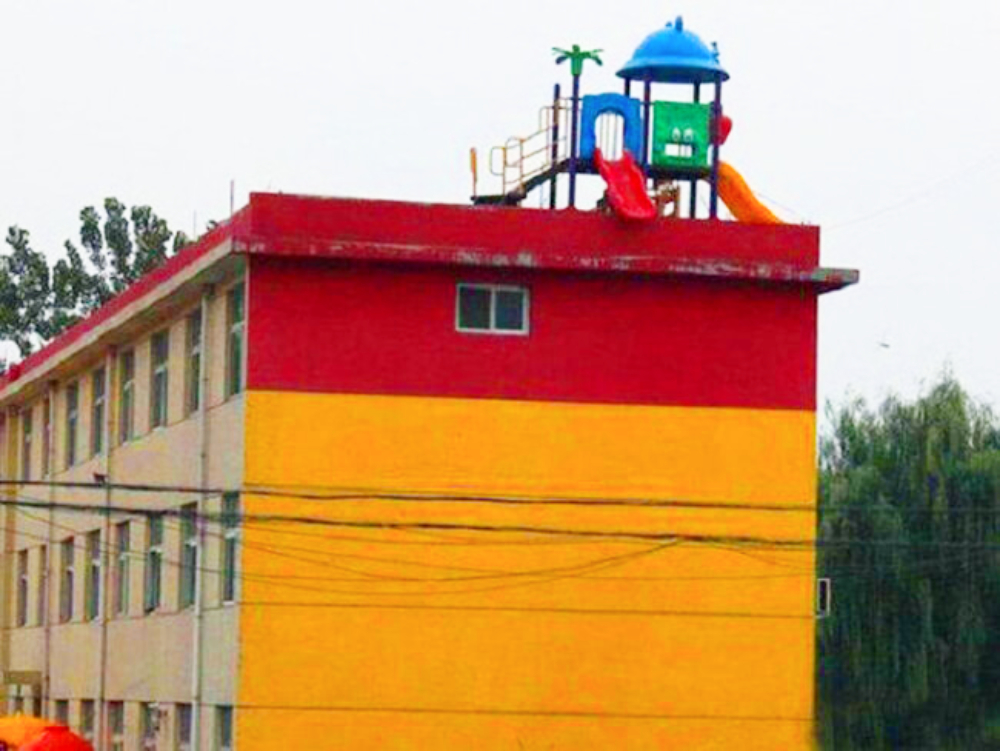 Children’s playgrounds have often come under fire for safety standards, but this one takes the cake. I mean, what were they thinking? Has there ever been anything as blatantly unsafe as this rooftop slide?

Well, yes actually. There has. And it may just win the grand prize for most dangerous electrician fail of all time. 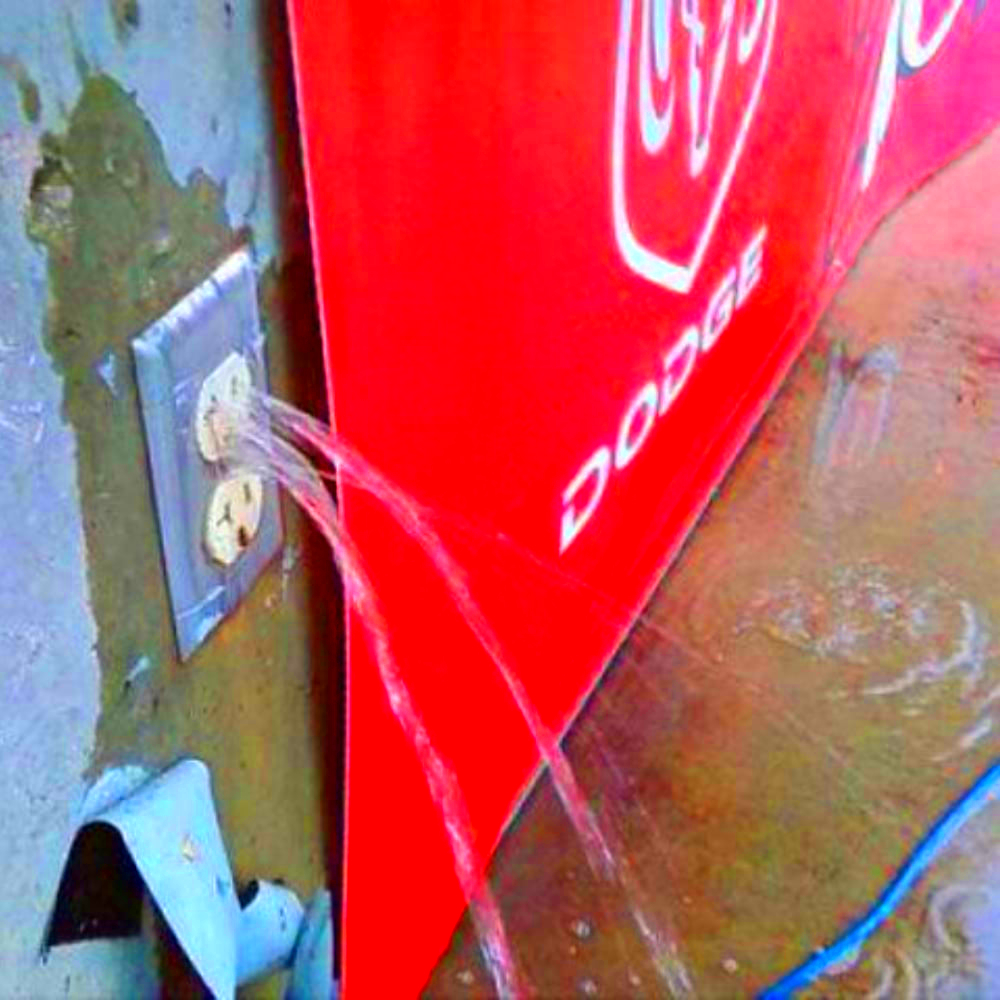 Need a little extra juice with your vending machine energy drink? Well, if you’re looking for a pre-workout boost, this probably isn’t the way to go unless you’re willing to stop off at the emergency room on your way to the gym.

But safety is pretty much optional when installing machines, right? These guys certainly seem to think so. 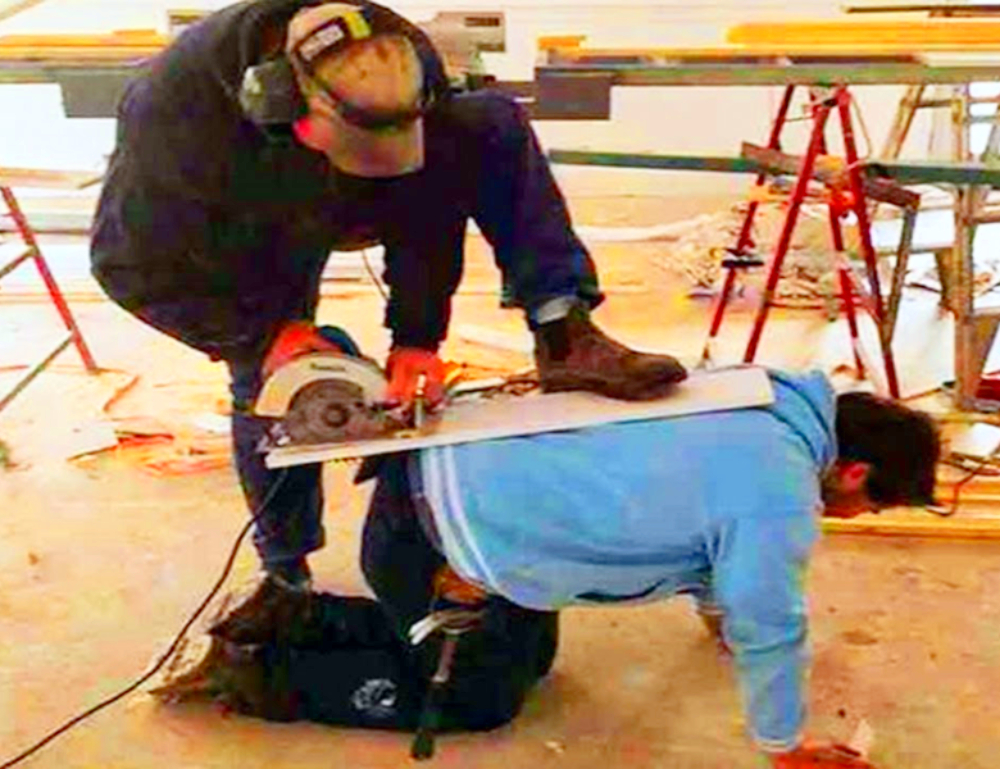 If you’ve ever found yourself without a workbench when cutting wood with a circular saw, you can always use your colleague’s back in a pinch.

Except no, of course you cannot, you absolute mad man! But maybe there’s a perfectly simple explanation for this. Perhaps he just forgot his glasses that day like these painters. 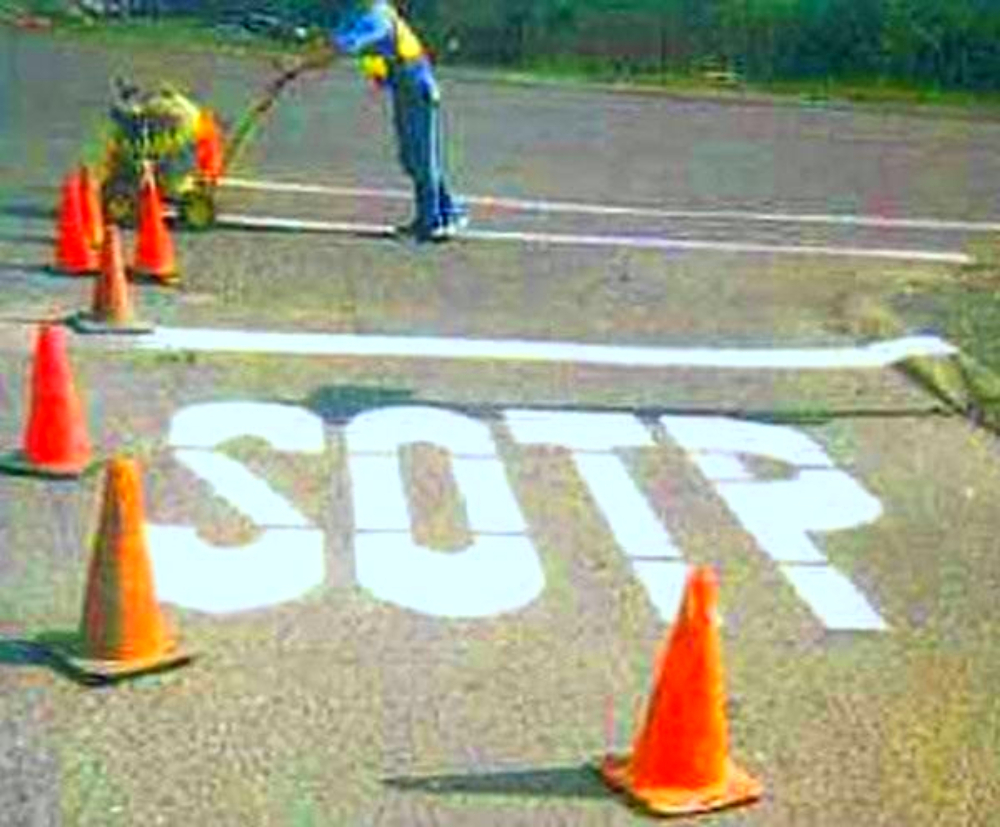 The driver that gets pulled over for not stopping at this junction has got a watertight excuse. How was he supposed to stop when he was already so busy “sotpping?”

Of course, some roadwork signage mistakes can be chalked up to English not being the worker’s first language, or perhaps a case of dyslexia. So what is this bizarre bridge builder’s excuse? A bridge has one job: connect point A to point B and don’t let any cars fall in the water. But like cutting Christmas wrapping paper from two different ends and expecting them to meet perfectly in the middle, these architects are going to have to start from scratch.

But at least they weren’t setting a terrible example to the children of this poorly constructed high-school.

Did they put a pillar in front of a staircase, or build a staircase leading into a pillar? Either way, the principal of this school is going to have a hard time convincing these students of the benefits of planning ahead with this outside the classroom window.

Do you feel a little better about your own DIY skills now? Perhaps calling in the “experts” isn’t always the safest thing to do.