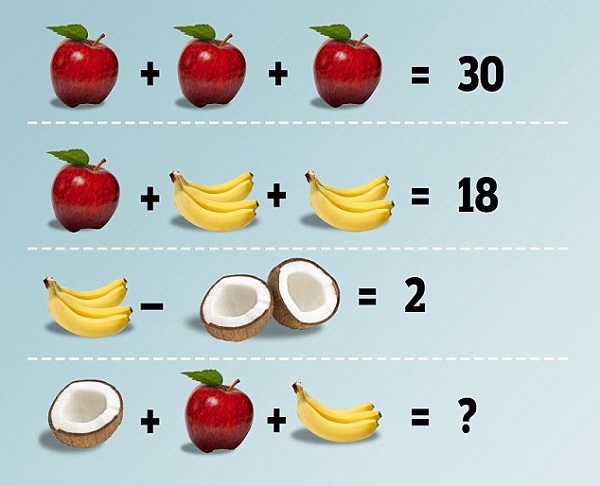 Another seemingly straight-forward (children’s) math problem is making the rounds on the Internet.  This time, it features fruit:  apples, bananas, and coconuts.  Now, the answer seems obvious at first glance, but due to a little (intentional?) visual trickery, the answer isn’t clear cut.

Figure it out?  Here’s the solution (s)…

The top equation shows 3 apples summing to 30, therefore we can conclude that each apple is worth 10.

In the final equation, we have one coconut half plus one apple plus one bunch of bananas.  So, what’s the answer?

Here’s where the debate begins…

Some believe that if a pair of coconut halves equals two, then a single coconut half must equal one. Likewise, they believe that if a bundle of four bananas equals four, then a bundle of three must equal three, leaving a final answer of 14.  As a side note, on first glance, I didn’t even notice that the bunch of bananas had 3 instead of 4 bananas…

So which is it?