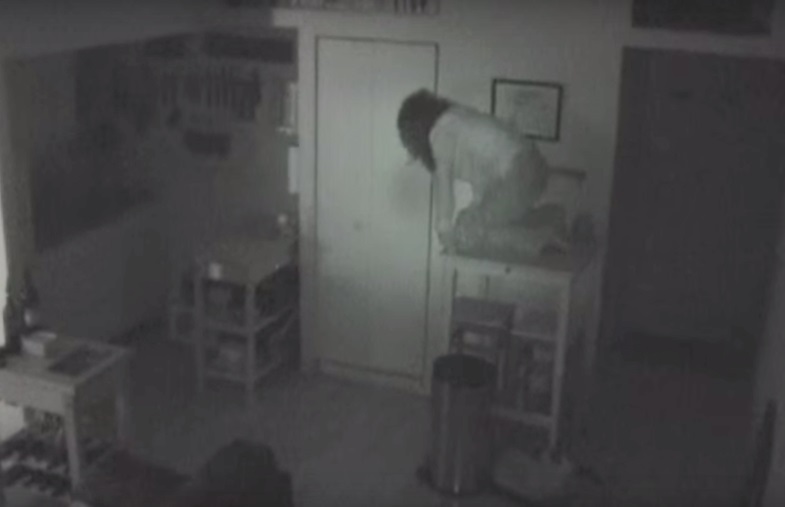 He settled in to watch the video as he had set up a hidden camera in his kitchen. He couldn’t believe food had been going missing for so long. He questioned his girlfriend; she must be the one who was taking everything. He sat down, ready to catch her in the act. But as he watched the clip, his skin began to crawl.

He knew there and then, the woman in the video was not his girlfriend. 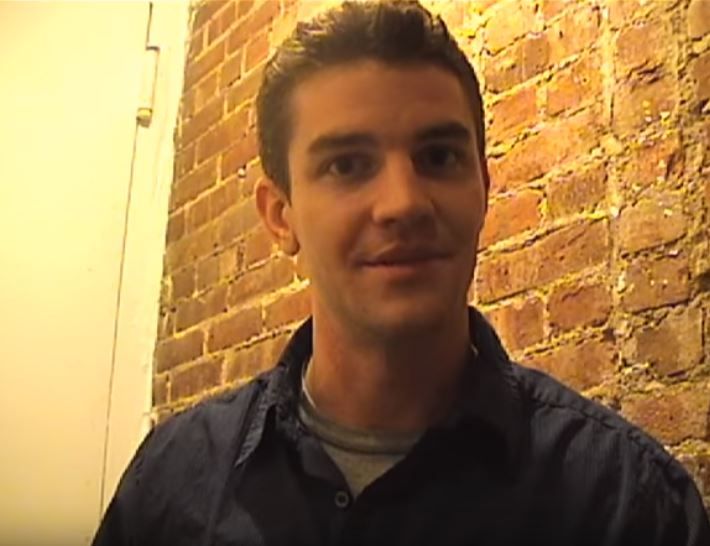 Actor Joe Cummings, a New York, Manhattan resident, had been living in his apartment for a couple of years. Until one day, something made him want to get out of there as quickly as possible. For several days he started realizing food was vanishing. At first, he didn’t think much of it.

But one day, after re-supplying the pantry and fridge he couldn’t help but notice half of everything was gone. He knew he had to approach her. Cummings and his girlfriend were living together and had a stable relationship. They lived a young couple’s life in the city where all dreams come true. At that moment, they had it all.

Until one day, while he was sleeping he could not help but hear the squealing of a door, thumps on the floor and even what he thought was footsteps in the kitchen. Not only that but he would awake to most of his food gone. He’d had enough. 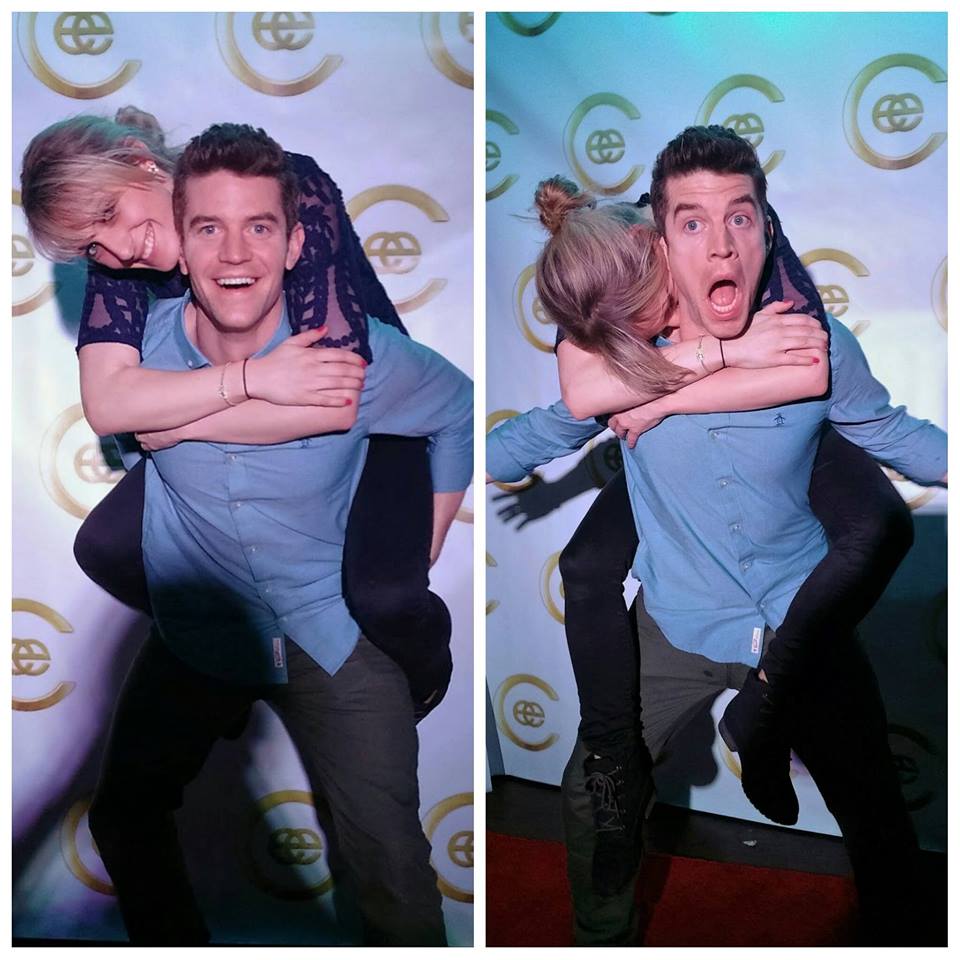 He approached his girlfriend and asked her if she was the one who was taking all the food, he went as far as regarding the matter as “stealing” which didn’t go very well in his favor. Would this be the end of their fairytale relationship? Things between them started getting tense. She kept denying everything, so he had no other option than to catch her in the act.

What he didn’t know, was that what he saw, was a lot worse than what he was ever expecting. 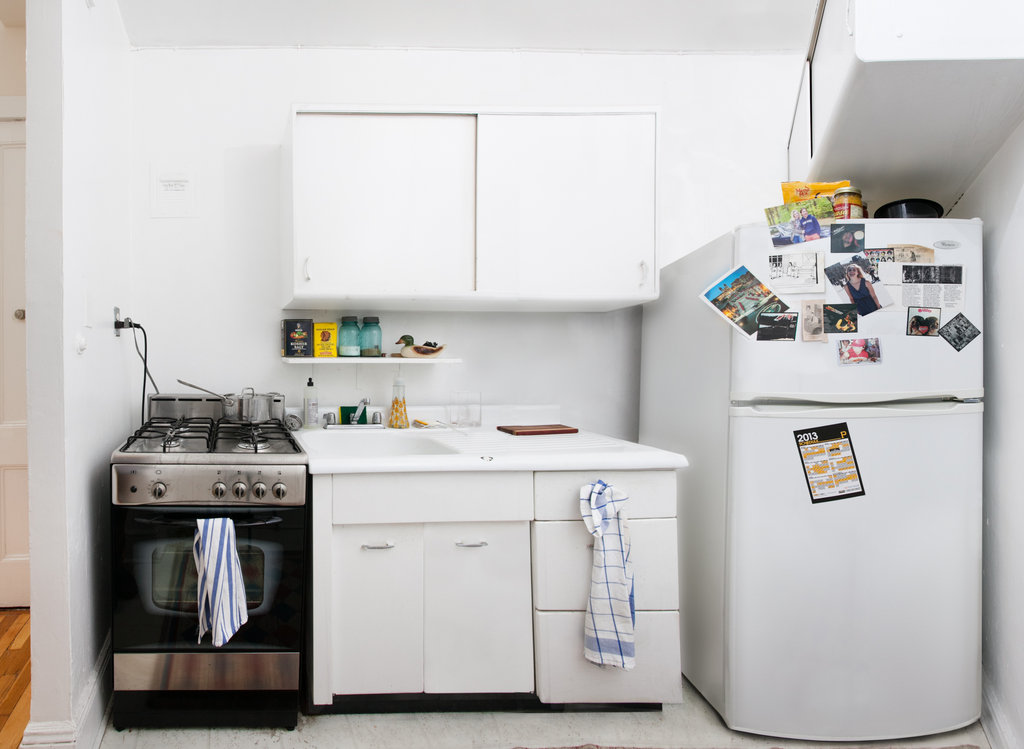 He knew he had to something; he couldn’t continue living like this. His girlfriend had denied taking the food at night. He was going crazy. Was he imagining all of this? Could the house be haunted? He thought it might be an animal who kept getting in.

But then Cummings remembered, he would always close all the doors and windows before going to bed. It had to be something that was already inside his house. 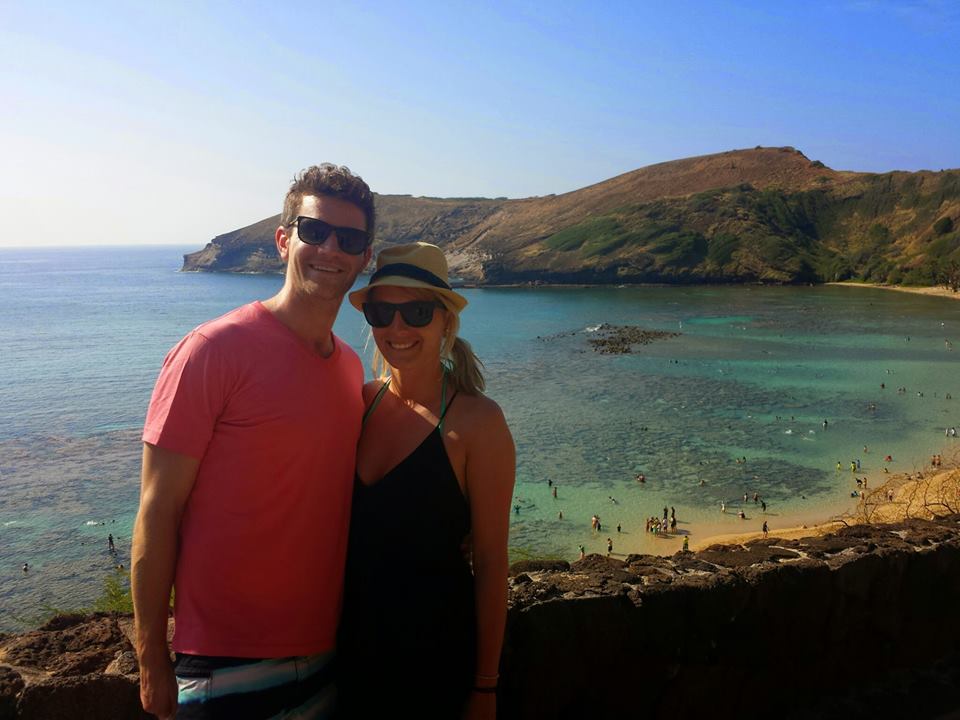 Knowing that this might end his loving relationship with his girlfriend, he needed to find answers. Cummings finally decided to put a camera up at an angle where the kitchen and part of the living space were entirely clear. Of course, he chose not to tell anyone, not even his girlfriend.

He was sure that it was her munching away on snacks in the middle of the night. But what he could not fathom was why she would do such a thing? Cummings was not ready for the truth. He was ready to find out the truth and set everything up. He even went as far as purchasing night vision for his camera so he could get all the juicy details of his girlfriend’s midnight secret. At first, you can see how Cummings leaves his kitchen, and the kitchen is left completely alone.

Until a couple of hours later, when his own home becomes his worst nightmare. A woman comes down from what looks like an upper-level storage unit into the kitchen. He knew it, he thought. His girlfriend had been stealing food all along. Why hadn’t she told him and kept it a secret? Was this some joke?

He had to keep watching to reveal the truth, but what he saw next shook him to the core. 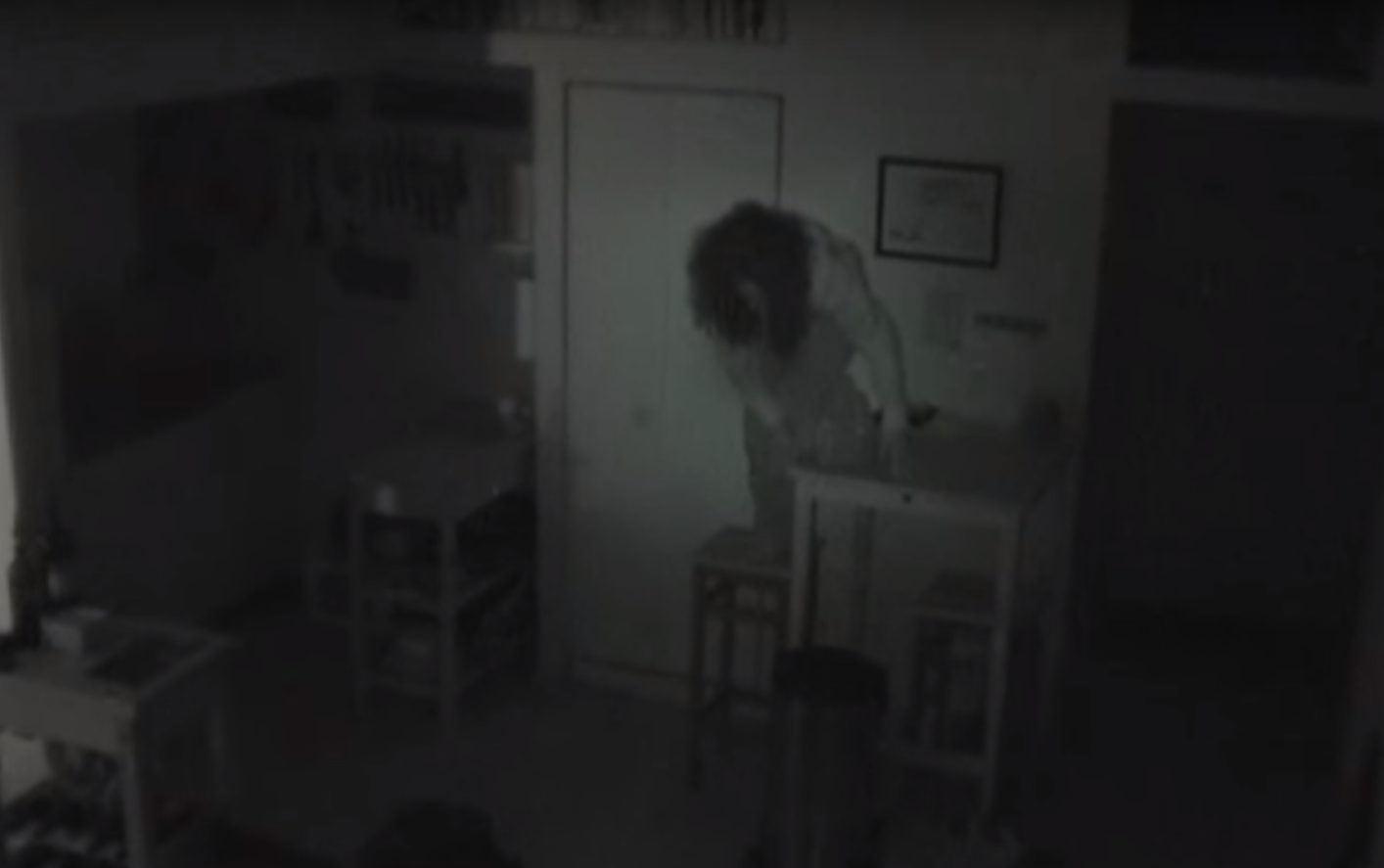 This woman crawls out and onto a nearby table, she then proceeds to steady herself as she takes a booth and places it at the right level so she can leap down. It didn’t look like it was her first time doing that, she knew exactly where to put herself.

The woman then turned towards the camera, and at this point, Cummins knew. This woman was not who he thought it was. 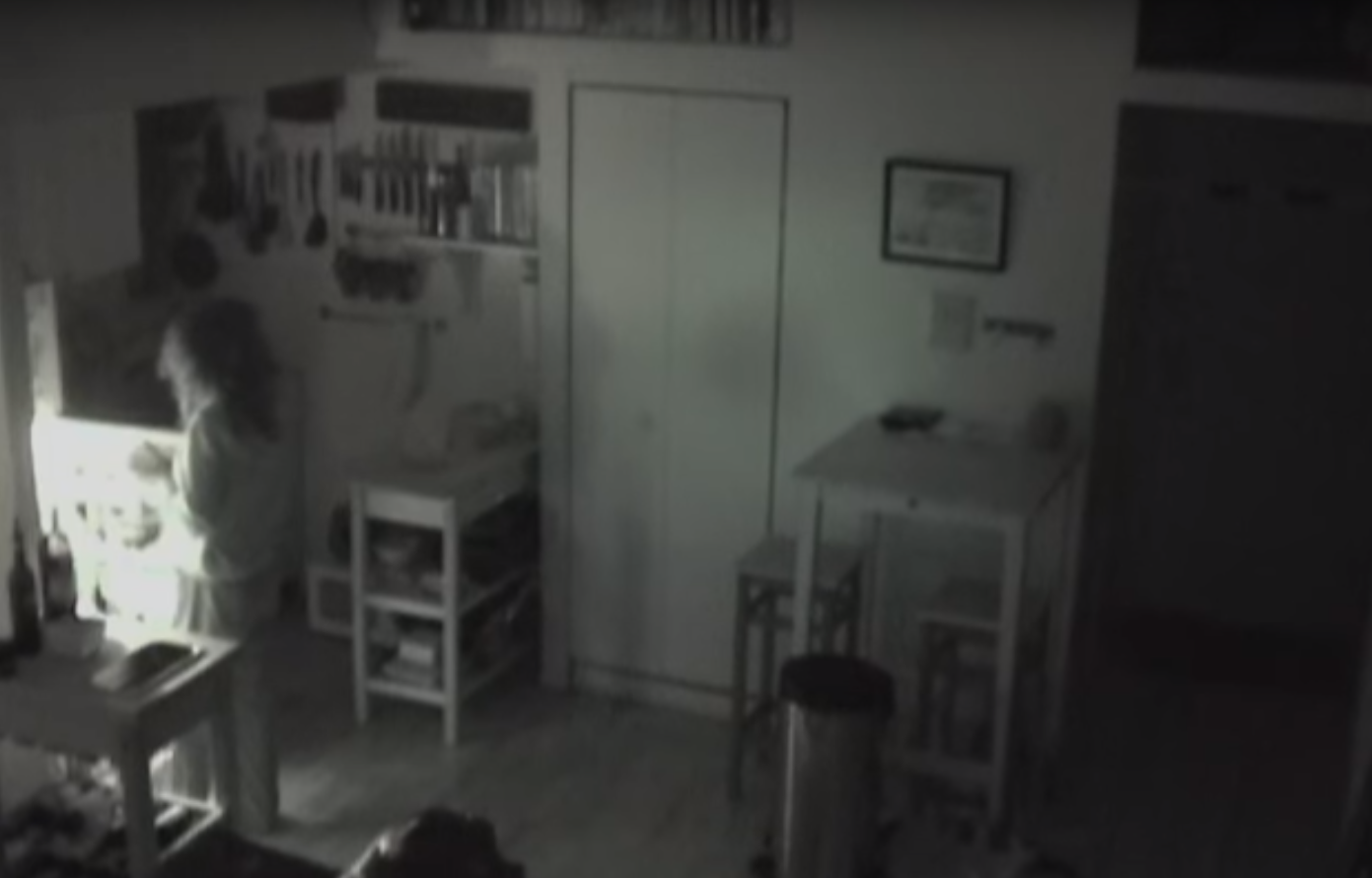 Cummings scalp prickled, and his breath stalled. His heart thudded louder and louder at the realization that this woman was a complete stranger. He still couldn’t take his eyes off the video and continued to watch the mysterious intruder.

The stranger continued to roam around the kitchen, at first looking in the refrigerator and drinking straight out of a carton of juice. Then, she urinates in the kitchen and continues her search for food in the pantry. Cummings’ stomach knotted. Who was this woman? 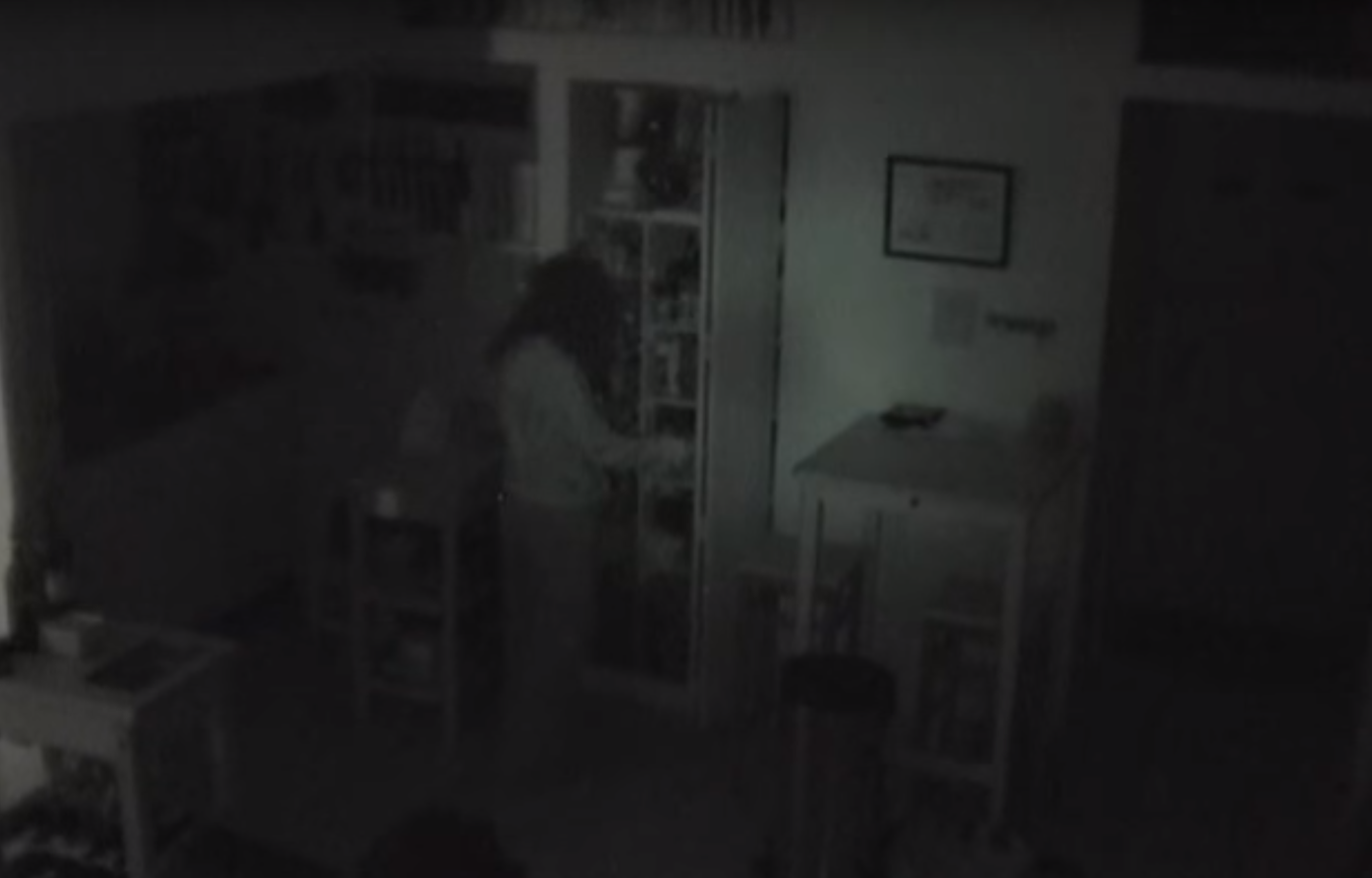 Now he knew why his food kept disappearing. He was unintentionally sharing it with a woman who had been hiding out in his apartment! She even dared to sit down and get comfortable on the couch while she snacked on something from his pantry. But then, something startled her.

The floorboards creaked as Cummings made his way to the kitchen for a glass of water. The strange woman dashed and found a hiding spot, coming out later when she knew the coast was clear.

She continues to drink and snack on whatever she can and then swiftly retreats to her hiding spot. The camera continues to record, and we can see Cummings the next morning getting ready to go out for a run.

He opens the fridge and drinks from the carton, much like his intruder did a few hours before. He still had no idea someone else was with him. He watched the tape until the end and could not believe what he had found. His hunch was correct; it just wasn’t his girlfriend the one who was stealing the food. “So, I kept on finding food missing in my apartment that I knew I wasn’t eating. I confronted my girlfriend who lives with me about it, and she claims she wasn’t eating it” – Joe Cummings says in his YouTube video. 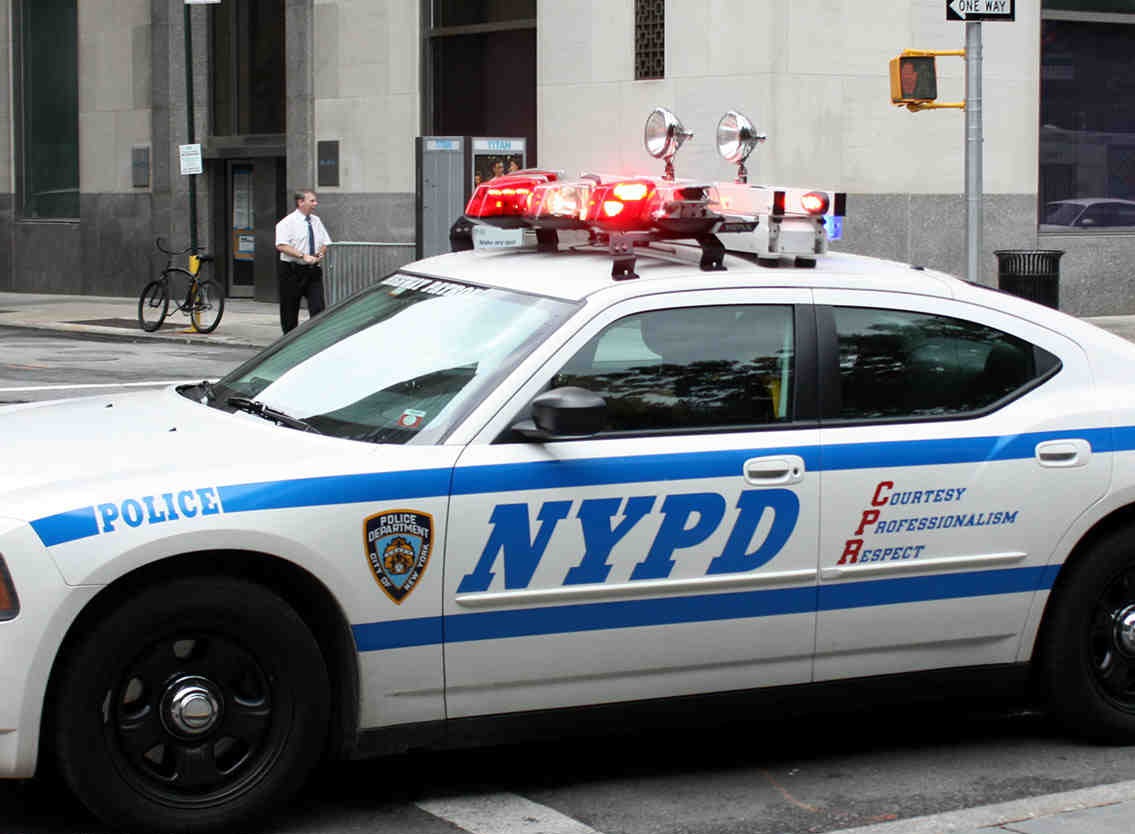 After watching the video, a ball of terror formed in his stomach and chills chased up his spine. He had to get out of there as soon as possible; he was completely terrified.

Gasping, he ran out the door and immediately called the police. The next thing they tell him rattles him even more. The woman was arrested and later discovered to have been there for over two weeks. “I have no idea how she got in there. The only way in is through the window as I am on the top floor and there is a fire escape,” wrote Cummings on YouTube. “The police think she was probably coming in to rob me when I was gone and decided to stay in the crawl space. Supposedly this isn’t the first time the cops had come across something like this.” His pulse ramped up as he was told she had been there for over two weeks, making the experience so much more disturbing.

He published the video, and it immediately went viral. Some are skeptic about it, but since then others have thoroughly investigated every corner of their house. Would they be able to sleep at night knowing their privacy had been invaded?