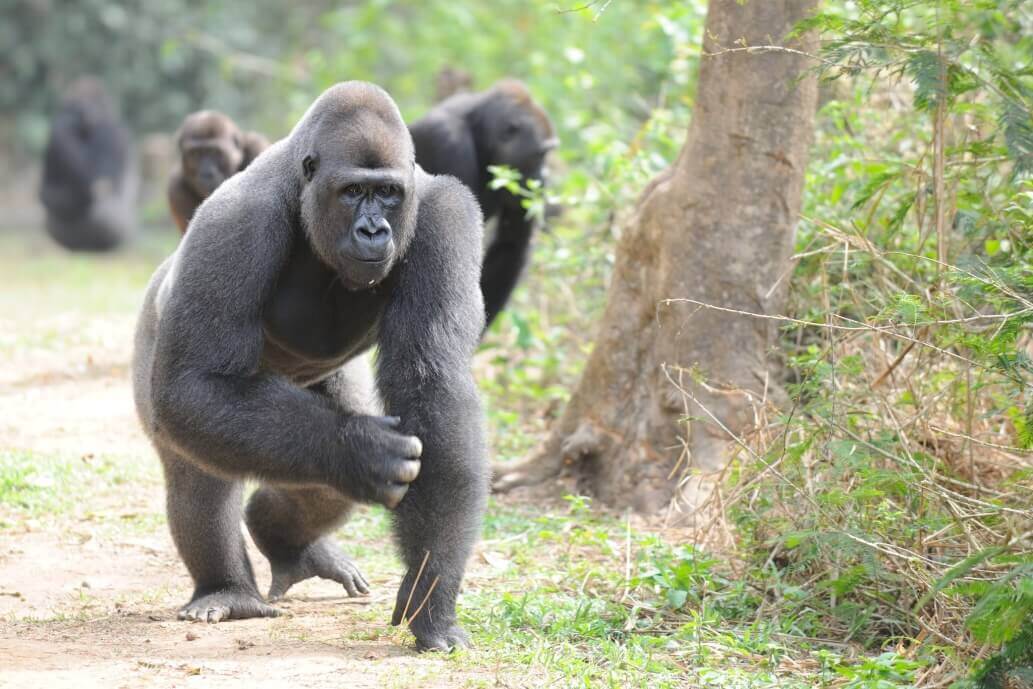 When a gorilla started acting strangely, the staff started to watch him closely. They’d never seen him act like this before, so they knew something was out of place. The gorilla was looking intently at something on the ground. But when they saw what it was that he was peering at, they weren’t prepared for it.
They watched closely and quietly, taking care not to cause any disturbance. The gorilla was acting strangely, and they had no idea what he would do if he noticed they were following him. They could see there was something in his hands, but the grass was too tall to discern what it was.
Then it suddenly came into view, and the staff had a moment of realization. And what happened next was completely unheard of — until now. 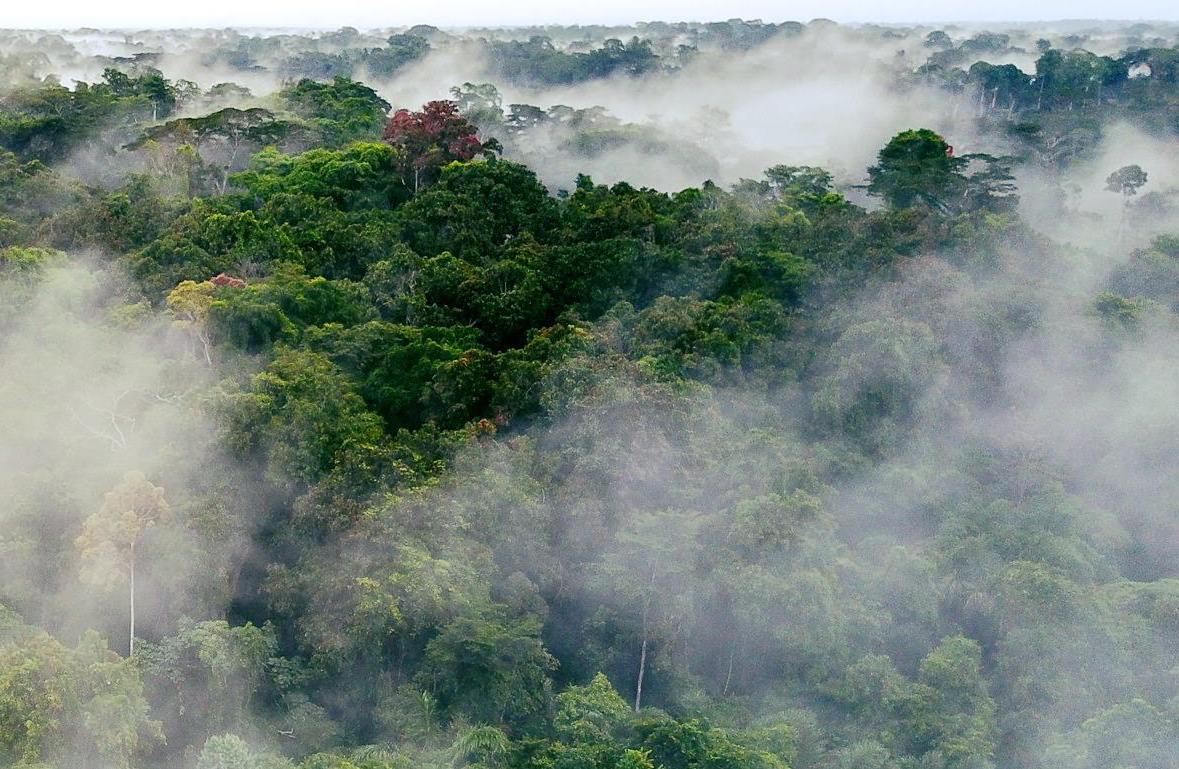 Though this was a particularly thrilling experience, there was really never a dull moment for the staff at the Mefou Primate Sanctuary in Cameroon. The facility acts as a refuge and rehabilitation center for rescued primates — mostly gorillas, chimpanzees, and monkeys. The sanctuary now hosts over 300 primates and is run by UK-based charity Ape Action Africa.
The organization created the refuge in response to the heartbreaking realities of wildlife in many parts of the African continent.


A Mission that Grew 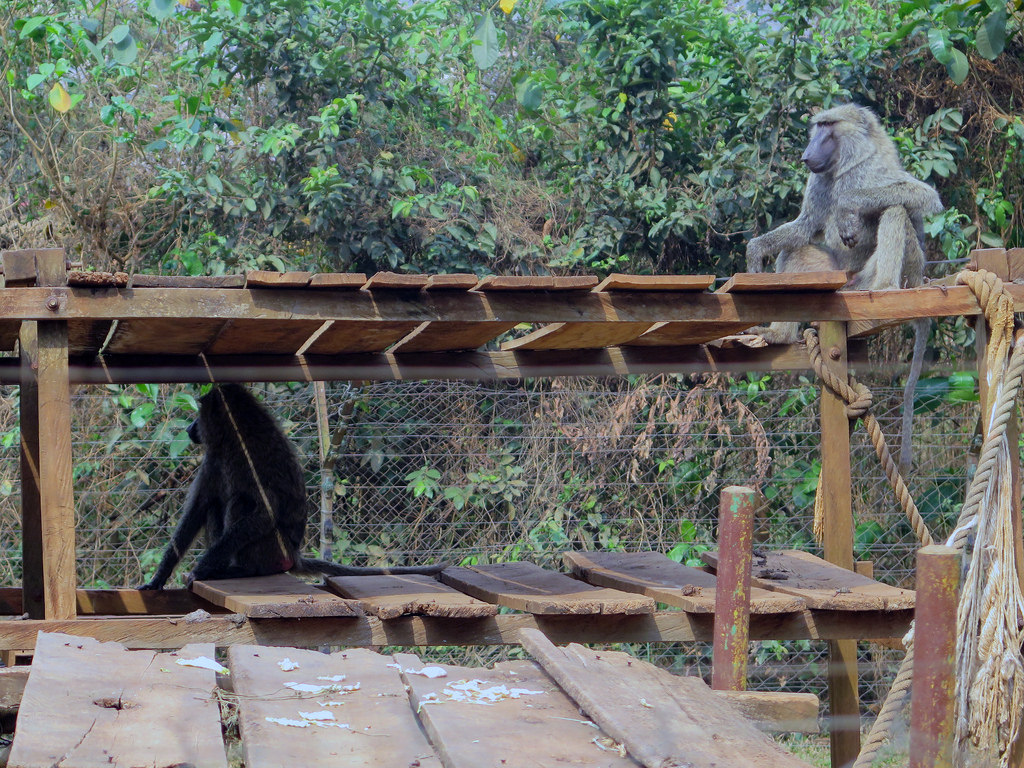 Ape Action Africa was established in 1996 and was initially known as the Cameroon Wildlife Aid Fund. Its founders created it with the objective of improving the living conditions of primates housed at the Mvog-Betsi Zoo in Yaounde. After 12 years of operation, they realized their mission was much bigger than that.
The illegal bushmeat and pet trades, along with shrinking habitats, were threatening all primates in Cameroon. So they decided to expand their scope.


Rescuing the Most Vulnerable 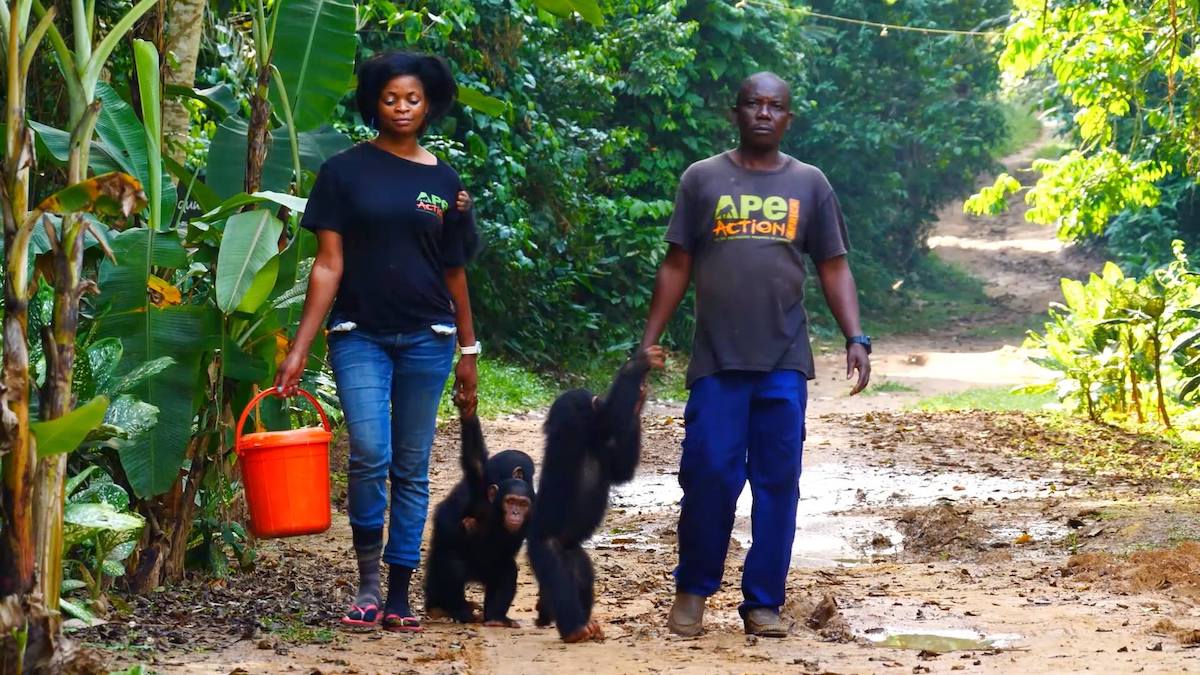 In 2009, CWAF became Ape Action Africa and began actively rescuing orphaned primates, providing rehabilitation, and giving them long-term care in a protected environment. And that is how they came to know Bobo. Bobo is a silverback gorilla who was orphaned as a 2-year-old after his mother was taken by poachers. He arrived at the sanctuary as a shy, reclusive toddler.
Now, 22 years later, he has grown big and strong. And he has made his mark. Bobo lives with a group of other Western lowland gorillas at the sanctuary. Not only that — he is the dominant male and leader of the group. At 350 pounds, he is large enough to impose his will on the other gorillas. But despite appearances, he has a kind soul. Staff at the sanctuary describe him as “a fair and gentle leader who is well respected by the group.”
Perhaps it was this mellow demeanor that caused some young males to mistake him as weak, but one day he proved everyone wrong. 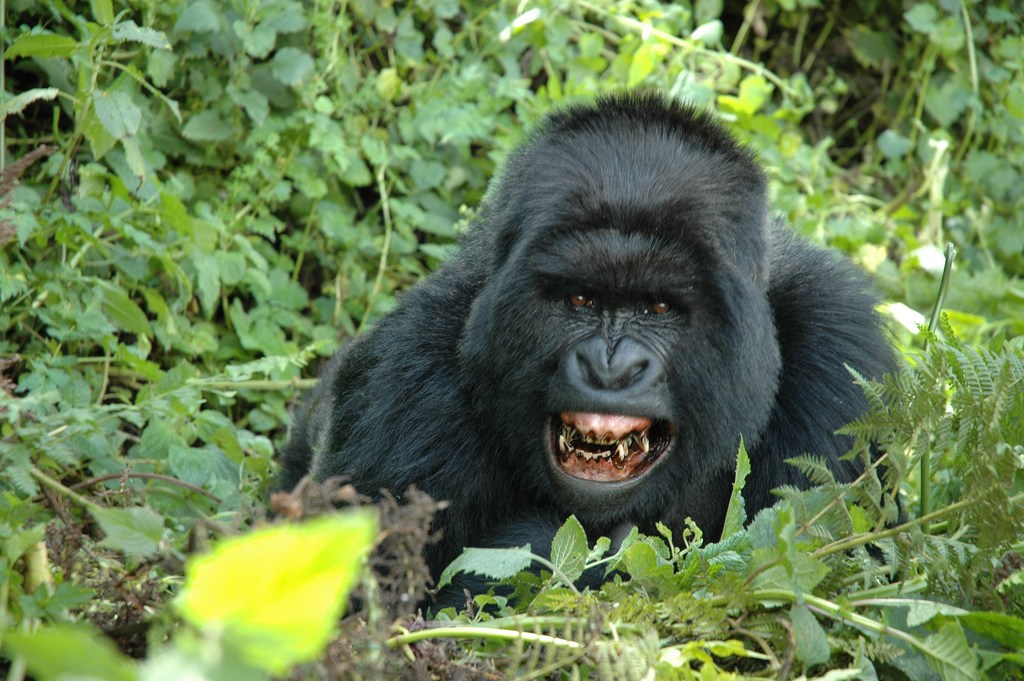 In the gorilla world, young males sometimes try to overtake the group’s leader. This happened to Bobo. “Younger males Kibu and Nkamum once challenged Bobo for his position, but were never successful and no longer attempt to take control,” said the sanctuary staff. Clearly, Bobo’s dominion in the group is unassailable. His sheer power and aplomb can incite fear in any potential opponent.
But then he did something strange, and his unusual display had everyone scrambling for their phones.


What Was he Doing? 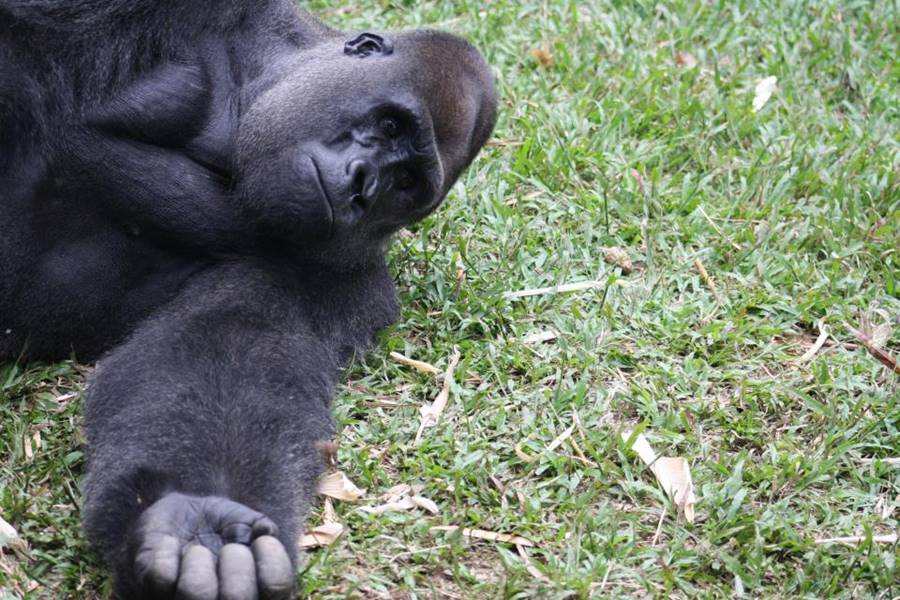 Every morning, the sanctuary caregivers go around the grounds to check up on their rescue animals. When they came upon Bobo’s group, they noticed he was acting strangely. He was laying low among the tall grass, intently looking at something on the ground. This was not Bobo’s usual morning routine, so the staff decided to stick around and watch him.
They knew any change in behavior can be a potential issue, and they wanted to stay on top of it.


Something in his Hands Orphaned wildlife often experience PTSD after going through such drastic lifestyle changes. Even Bobo, who’s been at the sanctuary for two decades, could be having an episode. So his caregivers kept a close eye on him, trying to figure out what he was up to.
Something in his hands was capturing all his attention, but they couldn’t figure out what it was. Then they saw it — and leaped into action. The object in Bobo’s hands was not an object at all but a living creature — and an extraordinary one at that. It was tiny, and Bobo’s caregivers couldn’t make out what it was at first. It’s tiny, furry body nestled in Bobo’s enormous and powerful hand.
Then, the surprised onlookers realized just what the strange creature was. It was another remarkable and rare primate — the smallest primate on the continent, weighing only 8 ounces. But what was Bobo doing with it? 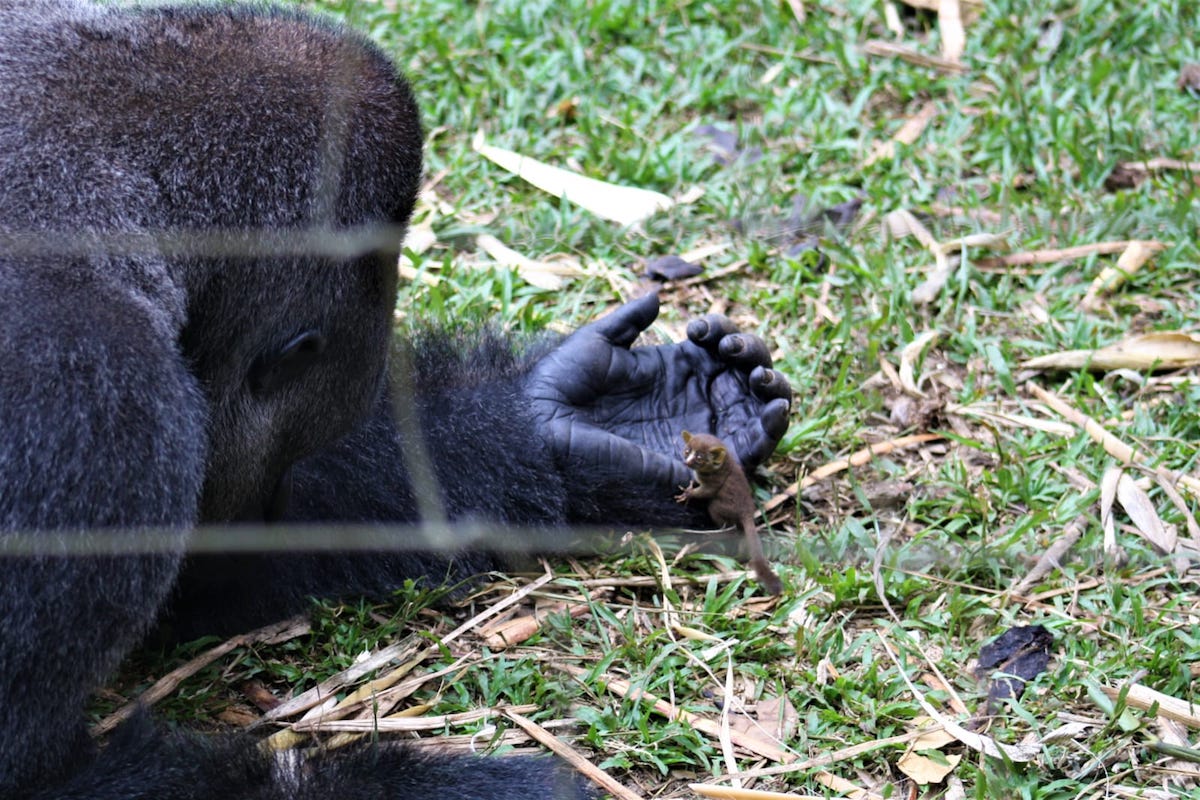 It was a galago, also known as a bush baby. Although the creature was tiny, that didn’t stop him from striking a friendship with a giant gorilla. The caregivers were in awe.“The bush baby had probably been living inside the gorilla’s enclosure, which is covered in trees, or just outside the fence line, as the area surrounding it is forest,” said Elissa O’Sullivan, a spokesperson for Ape Action Africa. But what surprised staff was the delicate way in which Bobo was handling his tiny friend.
But they were slightly concerned with the bush baby’s confidence around this giant gorilla. “The bush baby showed no fear of Bobo — moving around his body and spending time hopping around in an open grassy area, before choosing to return to Bobo,” said O’Sullivan. The encounter was even more amazing given galagos’ natural habits. “Bush babies are usually nocturnal so it is very rare to see one, and even rarer to witness this kind of interaction,” read a post on Ape Action Africa’s Facebook page.
Indeed, galagos are quite elusive creatures.


Made for the Night 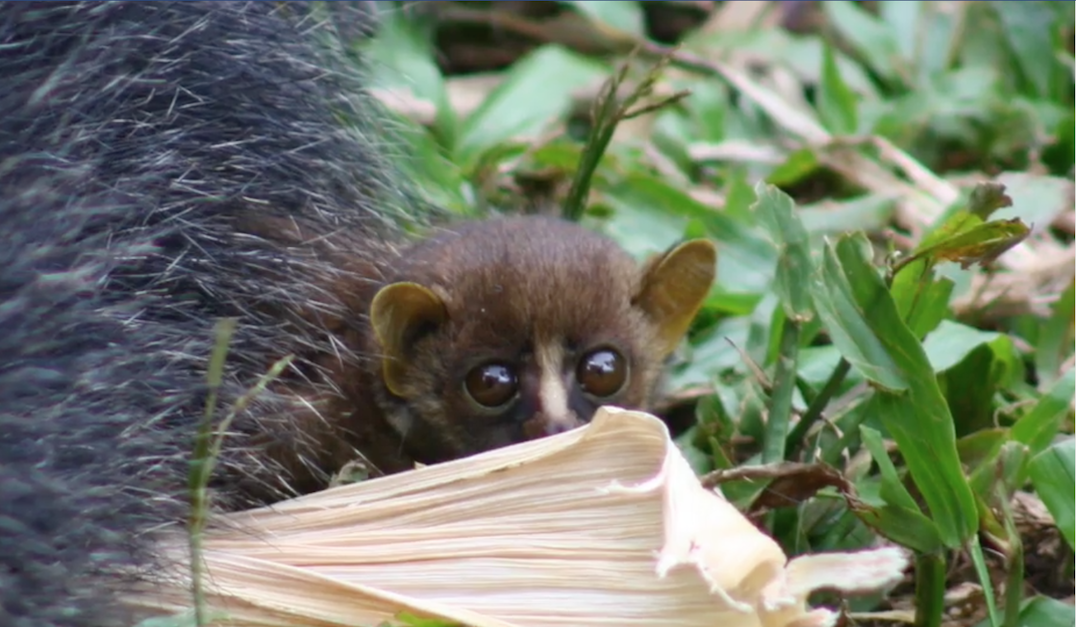 Galagos, like their cousins the Loris, are almost exclusively nocturnal and have evolved to hunt and feed in the dark. They have great night vision, acute hearing, and a sharp sense of smell that lets them “map” their surroundings by scent. Their prey-tracking abilities are so honed, they can snatch insects out of the air.
So it was an extraordinary sight to watch a gorilla meet a bush baby in broad daylight. But that wasn’t the only reason. Though the Mefou sanctuary only houses rescued wildlife, being next to the forest means wild animals are bound to find their way inside. But this experience was a first for everyone at the refuge. “We have never witnessed a wild primate interacting with a rescued one,” said O’Sullivan.
And the human caregivers weren’t the only ones who noticed something exceptional was going on. “The little bush baby was happy to play in Bobo’s arms, hopping off to explore the grass nearby, before returning to Bobo’s hand,” Soon, other gorillas in the group noticed their leader playing tenderly with a tiny creature.
Not wanting to be left out, they approached to see what was going on. Would so many big apes overwhelm the little galago?


Taking Care of his Friend “Bobo’s group-mates were desperately curious, particularly his favorite female Avishag, but he kept them all at a distance, making sure that no one disturbed his new friend,” wrote the sanctuary. Two hours later, playtime was over, and Bobo knew exactly what to do. “When the game was over, Bobo walked purposefully off on two legs to deliver his friend safely back into the trees,” ended the Facebook post.
Wouldn’t we all love a friend like Bobo?
Must Read
European Space Agency Budget Increases By 10 Billion For The Next 3 Years
Artemis 1 Finally Launches: What It Means For Space Travel And Exploration
Clam Species Presumed Extinct For 40,000 Years Has Been Found Alive