He had never seen a wildfire spread so quickly before. He needed to get back to camp to rest. But then, he saw a new billow of white smoke and realized it was coming from their own campsite.
There was a scent of charcoal and lighter fluid in the air, and he knew he had to call for backup. 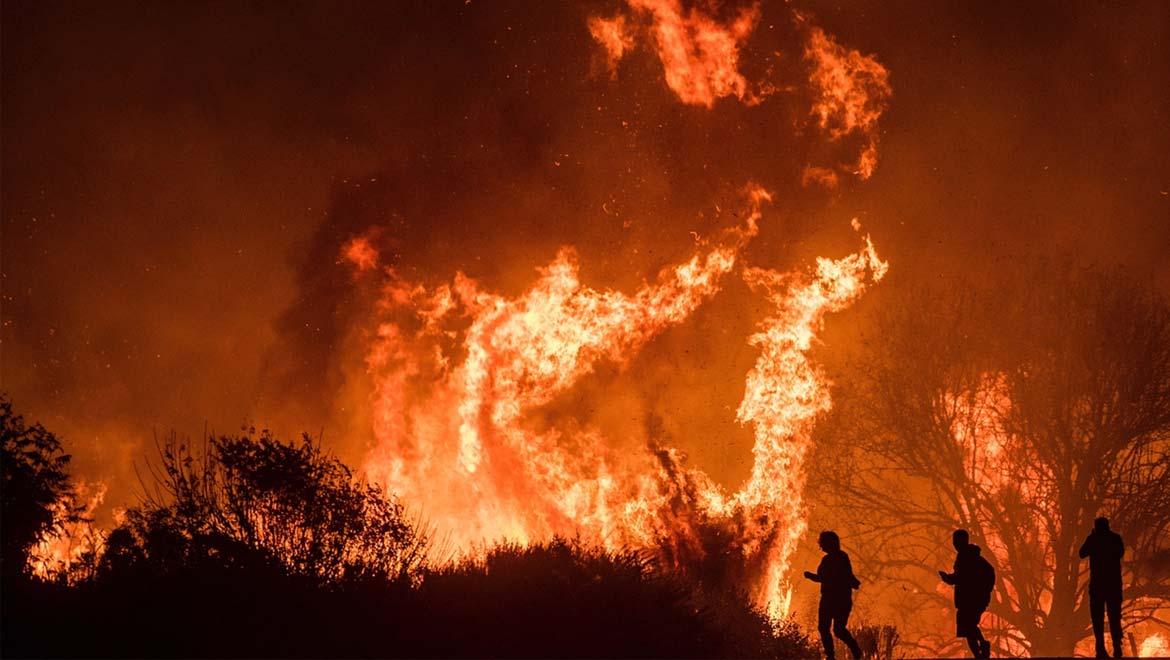 Multiple wildfires were raging across the state of California, wiping out entire towns and forcing people to run away from what they once called home. These fires had been identified as the most destructive in California history.
Little did officers and firefighters know that someone unexpected would appear on the scene.

Striding Through The Camp 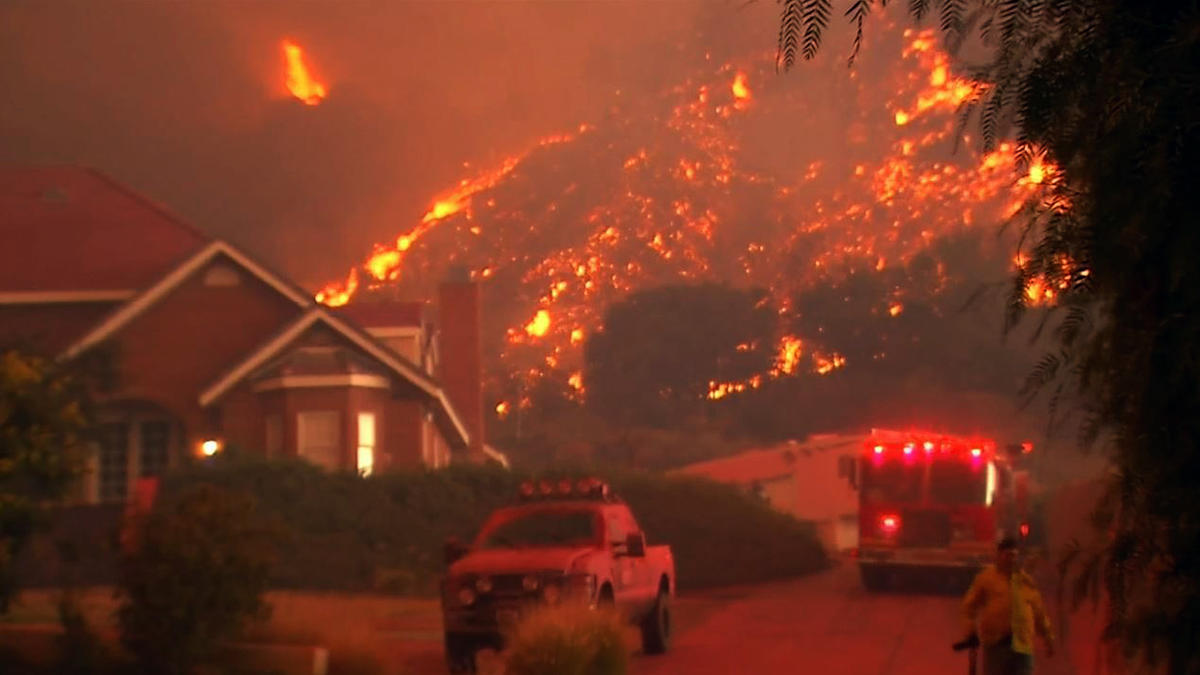 The heroes who worked every day to stop the flames had a tough job ahead, they worked 24-hour shifts and then, some could relax and get some needed rest in camps that were secured not far away from the massive fires.
One day, a figure caught their eye. He was striding through the site with determination and disappeared into the trees. Heroic firefighters, police officers, and volunteers worked tirelessly to contain the fire, and then, suddenly, there was another bout of smoke coming right from the trees, inside their campsite.
But this fire had been freshly lit, and the firefighters immediately knew that something was off. How had it gotten past the firebreaks? 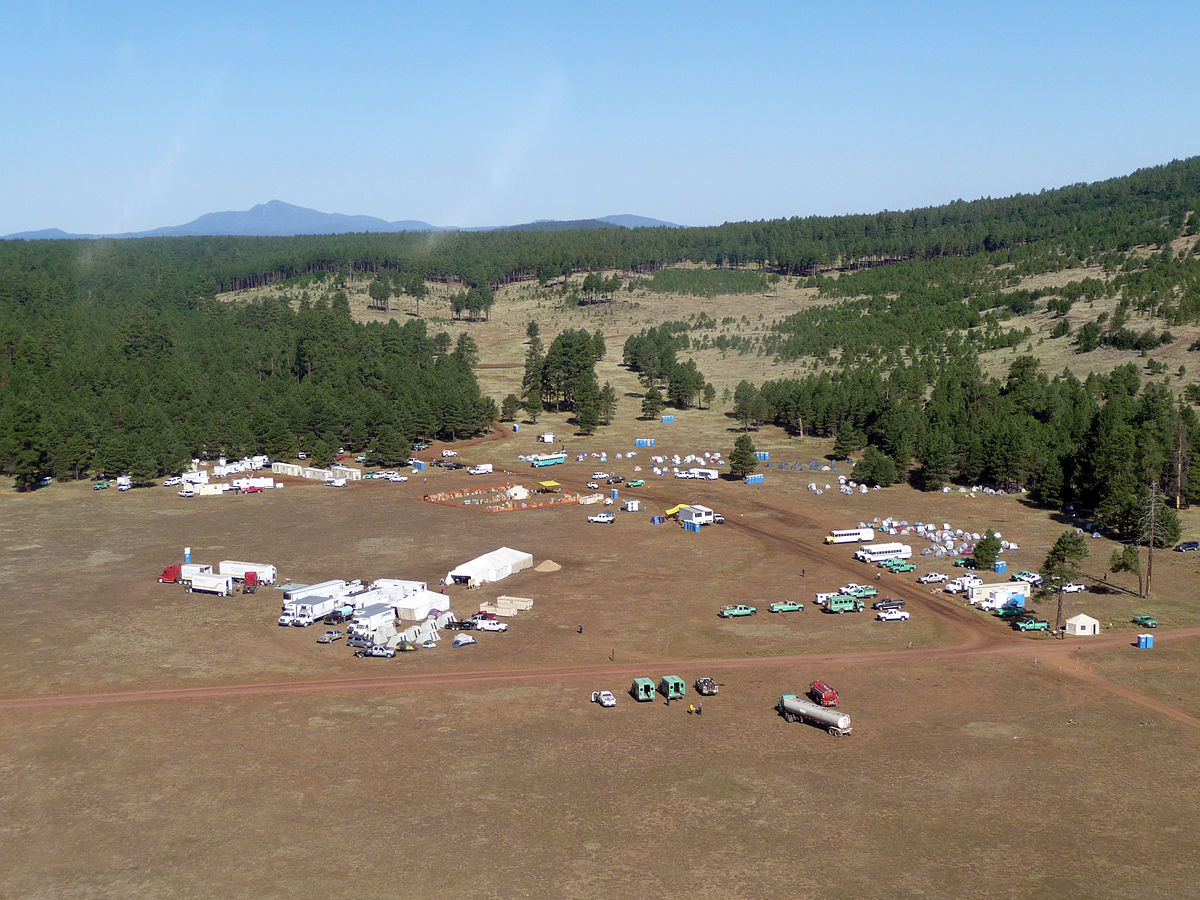 Dangerous storms of hot embers rained down, and 72,500 homes were still in the path of the blaze. Firefighter Stuart Chavez couldn’t risk having the campsite razed, it was the only place where the brave men battling the fire could rest between shifts.
Chavez immediately began to track the smoke from the new fire within the campsite, and then he smelled something that made the hair on his arms rise. 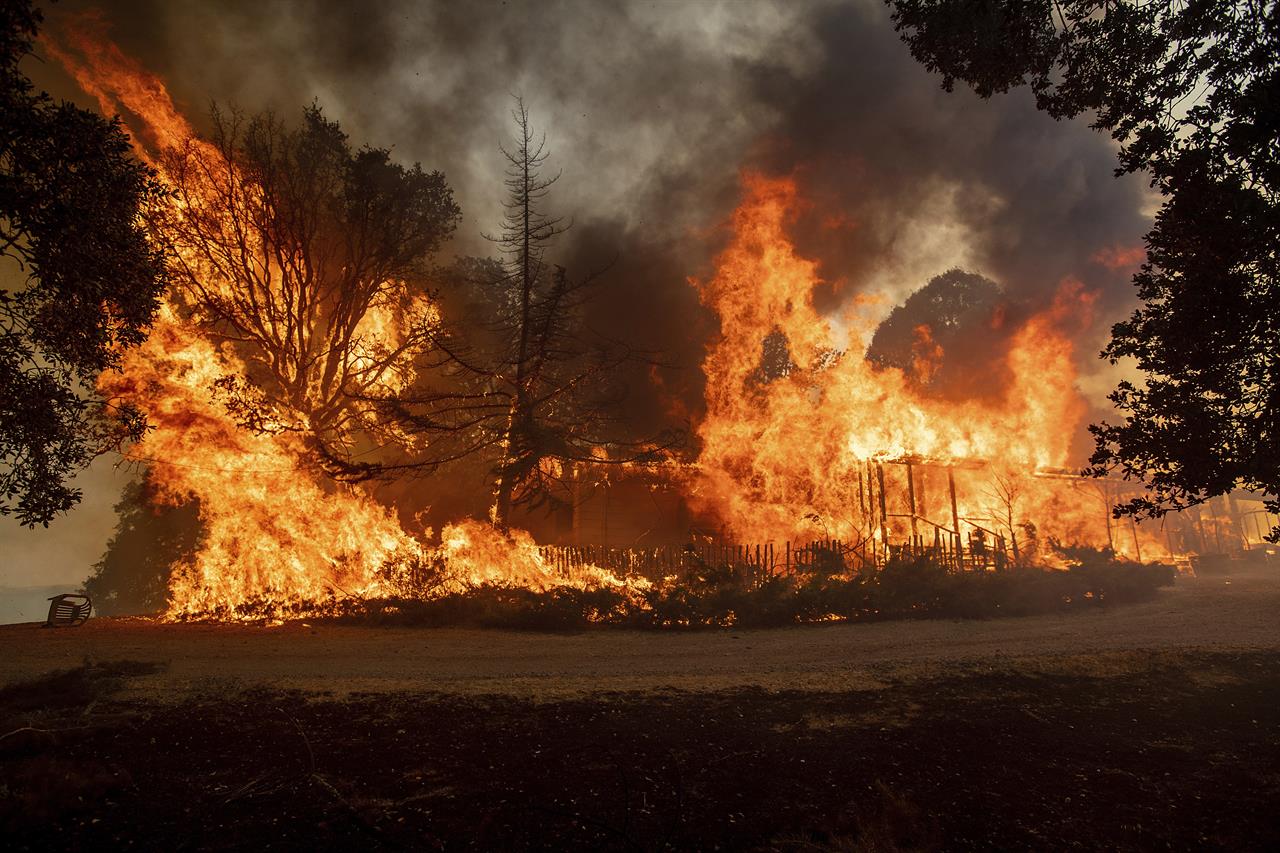 As Chavez approached the white smoke in the campsite, he smelled the familiar acrid scent of charcoal and lighter fluid. And something else, underneath the smoke. And it terrified him.
Nothing puts fear into a firefighter’s heart like arson. Was someone lighting new fires on purpose? Why did he smell fuel for a fire when they were all so desperately trying to put fires out? 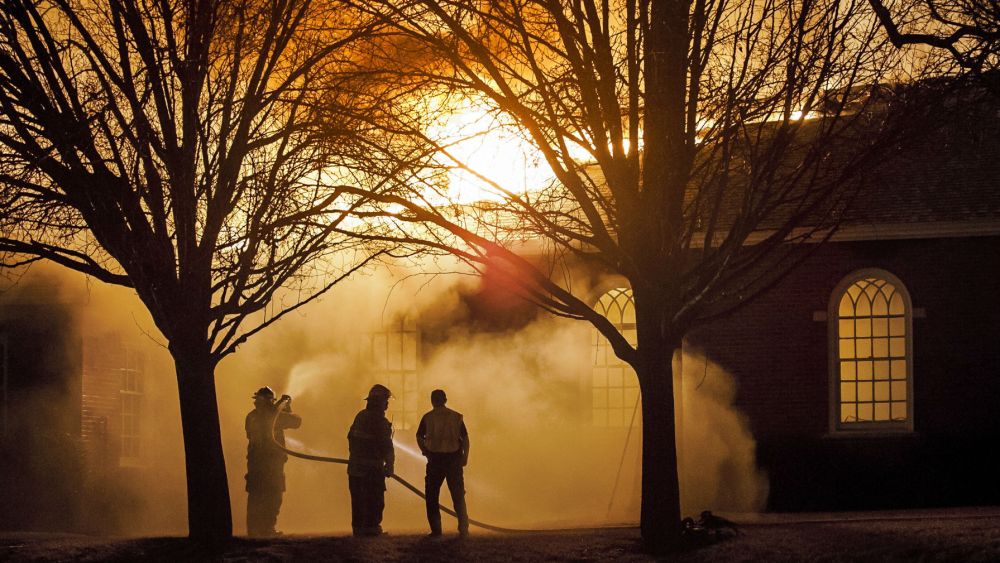 The wildfires had already burned 20,000 acres, and Chavez was starting to wonder if the real reason for the fires was arson. He knew all too well that even though the intent was not always criminal, humans were nevertheless the most common cause of wildfires in the United States.
And now, there was evidence that someone was lighting fires in the firefighter’s campsite. Chavez was hungry for justice as he tore in the direction of the new smoke. 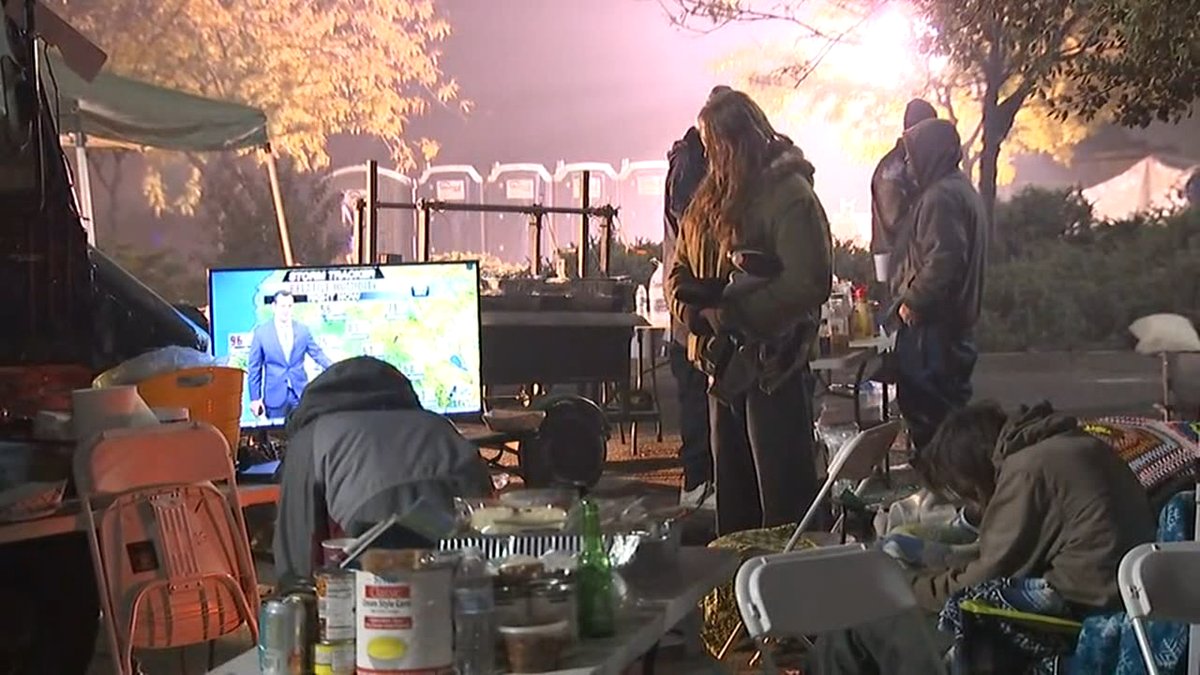 Chavez reached the clearing, and there were throngs of evacuees gathered there, around the billowing smoke. They were tired and covered in soot, some had their most precious belongings clutched to their chests, and some were clutching their pets and children.
All stood in disbelief, shellshocked. He edged his way past them. Then, a woman in tatters gripped his shoulder. 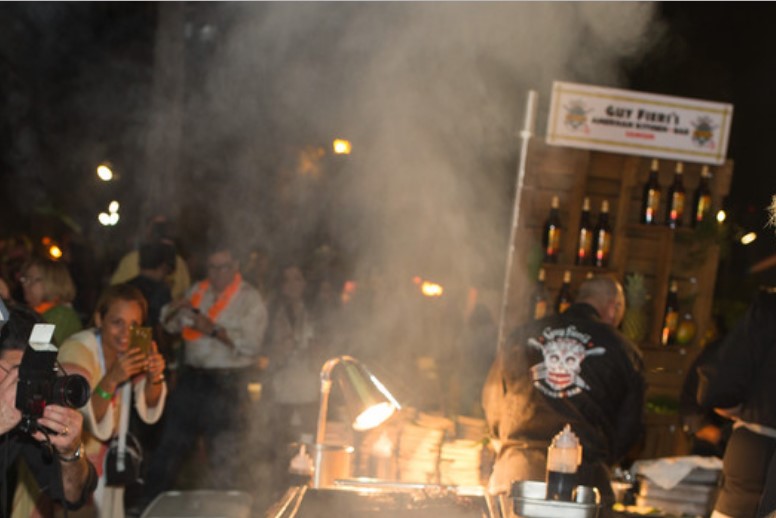 “It’s Guy Fieri!” she whispered in excitement. Chavez was confused. He knew that Guy Fieri’s restaurant in town had been closed and that he had fled the wildfires, too.
And now he knew why. But as he drew closer and pushed past the people, into the blinding white smoke, he could smell the sizzling flesh. 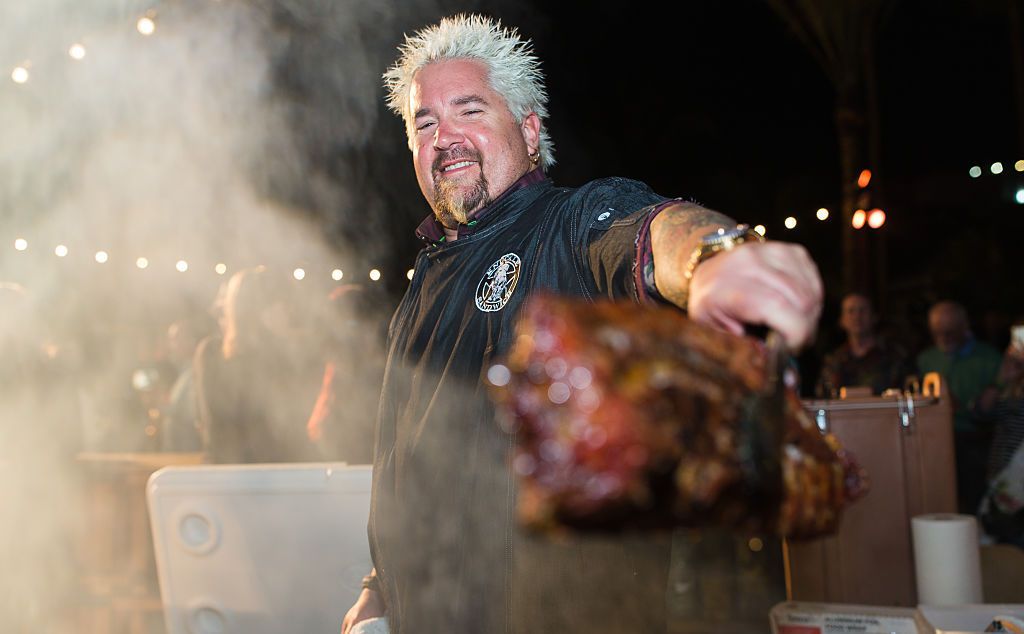 Chavez was bowled over. Guy Fieri was indeed the cause of the new fire, and he stood in the camp, tending his BBQ. The scent of smoked pork belly filled the air.
It turned out that Guy Fieri had heard about the incredible resilience these heroes displayed day after day, and while he couldn’t fight fires because he didn’t have the training or skills, he still had one talent that he knew he could put to good use. 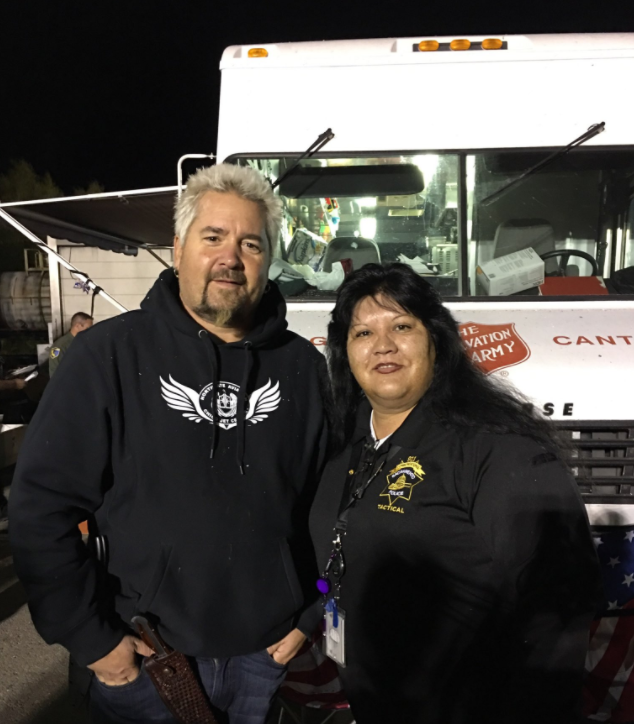 As officers approached them, they were in awe of this man’s kind heart. Instead of running away from the fire, he ran towards it to help those in need.
The camp where the officials had set up was also a temporary home for evacuees in the area. And Guy Fieri knew just how to put smiles on their faces. Butte County Sheriff’s couldn’t express their gratitude enough. All of the men and women who were serving to protect and save Californians from these treacherous fires were more than happy when they noticed what this incredible chef was doing and took to Twitter to share a picture as post a caption:
“Guy Fieri made a surprise visit to serve dinner to everyone at the law enforcement staging area at Butte College. Thank you so much Guy for filling our bellies and lifting our spirits.” 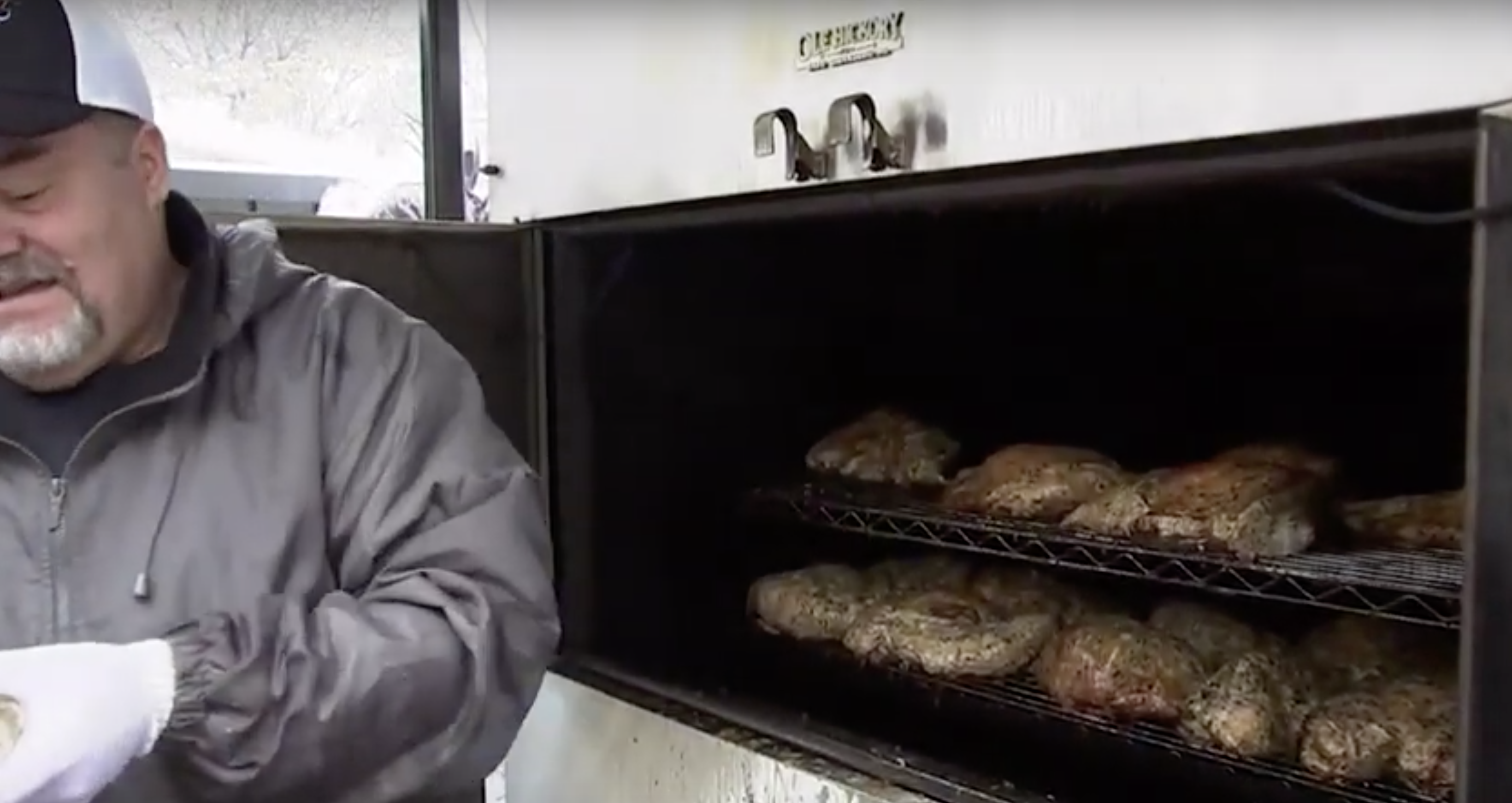 The home-cooked meals Guy had prepared for them all included pulled pork and other savory dishes. This act of kindness helped lift so many spirits after such long, disheartening days.
With this act, he showed everyone what a fantastic person he is — also becoming a true hero. Little did the officers know, this was not going to be the last time they would see Guy Fieri.


Not The First Time This wasn’t the first time this fantastic man had come to the rescue. Back in 2017, when other life-threatening fires emerged in Santa Rosa, California, he also saw that evacuees got their bellies full.
He set up a tent with another chef and began to feed thousands of people, “I’m not promoting anything. I’m just here cooking. This is feeding people. People need help, and I’m here to help. That’s it.”

Fieri and other local chefs also worked with Operation BBQ Relief, a non-profit organization that “strives to provide compassion, and offer hope and friendship to those whose lives have been affected by disasters across the United States.”
The members of this group helped feed thousands of victims of Hurricanes Irma and Harvey earlier that year and were conducting their first-ever California relief effort. Not enough can be said about the happiness that they brought a lot of people. Fieri’s efforts to appease the community was more than fruitful. He had lifted everyone’s spirits in 2017, and now, in 2018 he did it once more.
Officers and crew gathered around and enjoyed each other’s company by sharing food, laughter, and pictures. Still, there was still a lot of work to be done. Sadly, even after days of constant dedication to contain the wildfires, they were still spreading. By November 21st, 2018, the fire was 80% contained. But again, the 20% left burning was treacherous.
Firefighters and police officers had been working around the clock for more than two weeks, and it was not looking like they wouldn’t get back to their families for the holidays. Luckily, the mayor of “Flavortown” – Guy Fieri himself, had a fantastic idea once more. He couldn’t fathom the thought that so many people were going to be away from their home on Thanksgiving, so he came up with a brilliant idea – bring thanksgiving to them. Food television personalities Guy Fieri and Jose Andres did just that.
On November 22nd, he arrived once again to “Camp Fire” and set up his “World Central Kitchen” tent. Alongside several other chefs, these two celebrities dedicated their Thursday to cooking thousands of Thanksgiving dinners for victims of the deadly fire in Northern California.
They estimated that 150,000 would be served, and once people heard about their incredible efforts, volunteers couldn’t help but pitch in. More than 800 volunteers joined Guy Fieri and Andres at their Thanksgiving feast.
“The least we can be doing today, on Thanksgiving, is all coming together to show the people what they deserve: love and support, one plate of food at a time,” Andrés said in a Thursday morning Twitter video. Fieri later tweeted a picture thanking the “dedicated hard working” firefighters and officers who have battled the fires for several weeks.
Between preparing meals and bringing the heat into the kitchen, Fieri took the time to pose for photos with officials from the Butte County Sherriff’s office, The Sacramento Police Department and Auburn Police Department. The Auburn Police Department posted a picture on their Twitter account.
“Guy is cooking pulled pork dinner for everyone this evening. He had also thanked everyone that is helping out for their hard work! Thank you, Guy, for your time, support and great food! #ButteCounty.” Guy Fieri posted updates when he could to keep everyone informed. He posted a photo of the fires to his personal Instagram page writing,
“In today’s tumultuous world, it’s amazing to see our firefighters, military, law enforcement, and first responders come together to rescue our communities devastated by fire.” “You stand up; you face it; and you go after it,” Guy Fieri told Refinery29, “You don’t back down from it.” What an incredible act!
Everyone in the camp was so pleasantly shocked when they noticed what was going on, they still couldn’t believe that Guy Fieri had surprised the hardworking firefighters and law enforcement officials by delivering and cooking such an enormous meal. Fieri started his day on Thursday at 5 a.m., and he took to Twitter to show the whole world his preparations, “We are off and cooking at 5 am. Goin’ for 7000lb of Turkey on 6 smokers!”
Little did he know; these incredibly heroic men and women were soon going to show the chef how amazing they really are. As word got out that Fieri was going to cook and serve Thanksgiving dinner to everyone who needed it, people started piling up at the door, and not to eat, but to help.
Even officials made their ways into the camp and shocked everyone when instead of grabbing a plate, they grabbed aprons. Major General Beevers joined in to feed the soldiers working on the grounds, but he was not the only one. Firefighters, officers, and military men and women got to work when they knew what was going on.
Fieri couldn’t hold back his emotion, he could have never have expected them to do such a thing.


Helpful In So Many Ways

“We got Cal fire that I thought was coming to enjoy the food. No, they’re in there serving for Thanksgiving!” the celebrity chef said.
More and more crew were coming to the camp and Fieri thought that this was because they wanted to eat dinner, but he was so very wrong. They were there to help! Thousands of people were part of the Camp’s Thanksgiving dinner, and it would not have been possible if it wasn’t for Guy Fieri. Still, most of the people who joined were complete strangers, but they had one thing in common – tragedy and resilience.
Everyone talked about what they were thankful for despite the great tragedy. “I’m alive,” Virginia Partain, a teacher at Paradise High, said. “My students all made it out. They’re all alive, and I believe in hope.” Little by little, the fire had become contained, but sadly a lot of people were still unaccounted for. The devastating flames had forced more than 27,000 people into shelters.
But for a couple of hours on the day of Thanksgiving, Guy Fieri gave them all something that we can only be thankful about, he gave them all hope and strength, to protect and serve, to fight and to never give up.
Must Read
Genome Studies Manage To Find A New Branch Of Fungal Evolution
European Space Agency Budget Increases By 10 Billion For The Next 3 Years
Artemis 1 Finally Launches: What It Means For Space Travel And Exploration