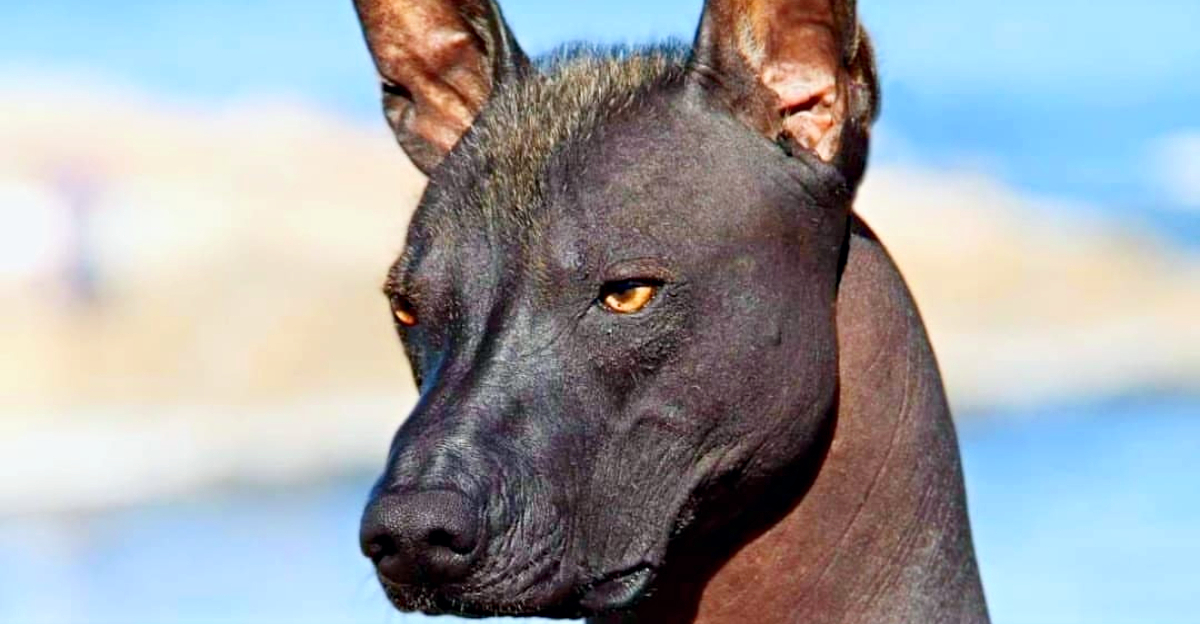 When she saw her two-year-old dog do something out of character it had forced her to consider that something wasn’t right. Now, there was no unseeing it. But by the time she had faced her denial and accepted the truth, it was much too late.

Su Yun knew that she was in big trouble. And soon, the police would be knocking on her door. 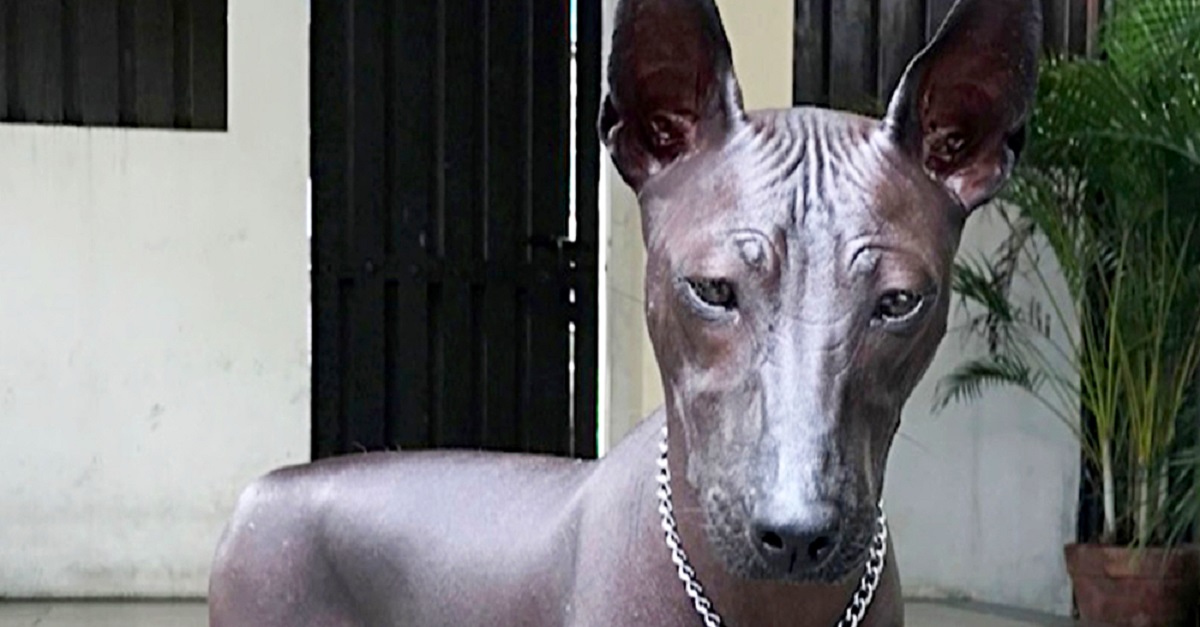 Su Yun thought she knew what she was getting herself into. She had done the research, read the reviews, and familiarised herself with exotic dog breeds. She had made all the necessary purchases — dog bed, collar, lead, shampoo, engraved tag. She thought they were ready for the commitment.

But as he began to outgrow his bed and collar and lead, she began to worry. Then, the unimaginable happened. 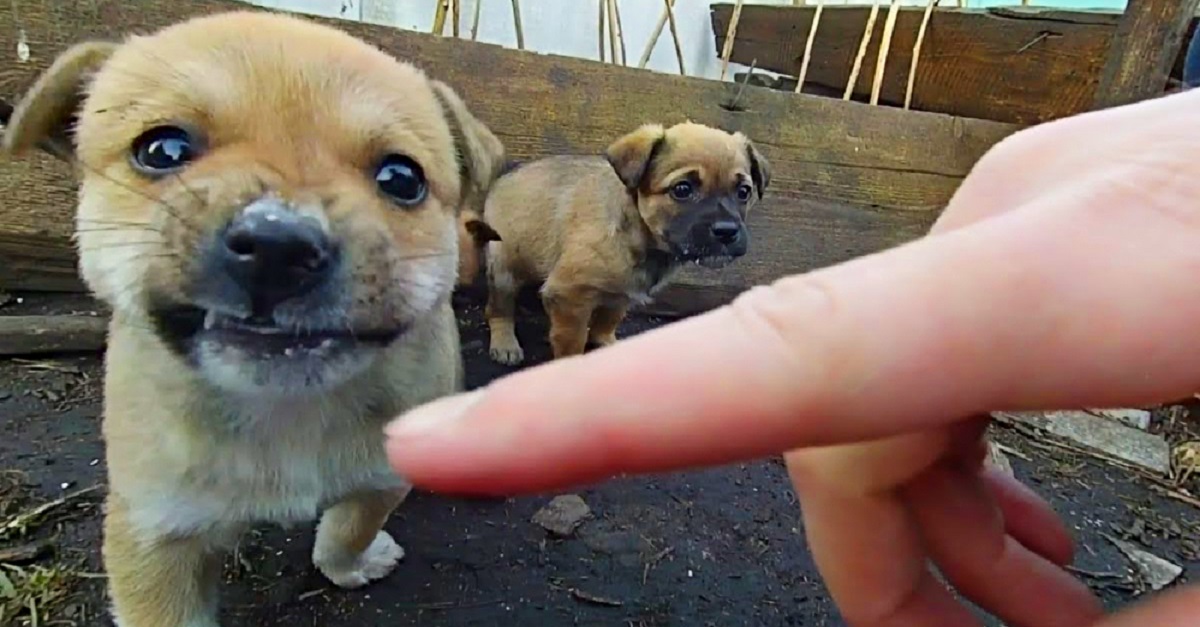 It all began innocently enough. Su Yun lived in Kunming City, China with her two young children and her husband. The hardworking mother was feeling the pressure of juggling family life and a full-time job, so she decided that it was high time for a holiday.

But what Su Yun didn’t know was that fate had a surprise waiting for her. 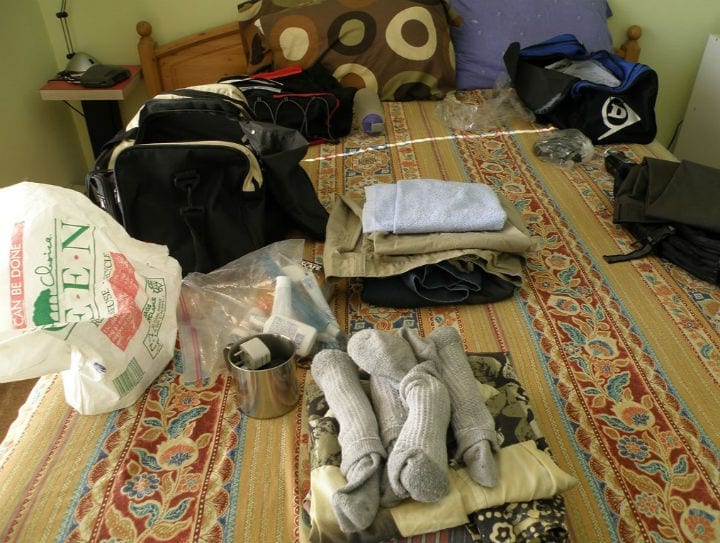 With bags packed and ready for their eagerly-awaited Asian trip, the Yuns embarked on the vacation that would change their lives. Little did they know, two years down the line their mistake would be making headlines.

A few days after their arrival, the family was just beginning to get into holiday mode when they came across a litter of puppies. 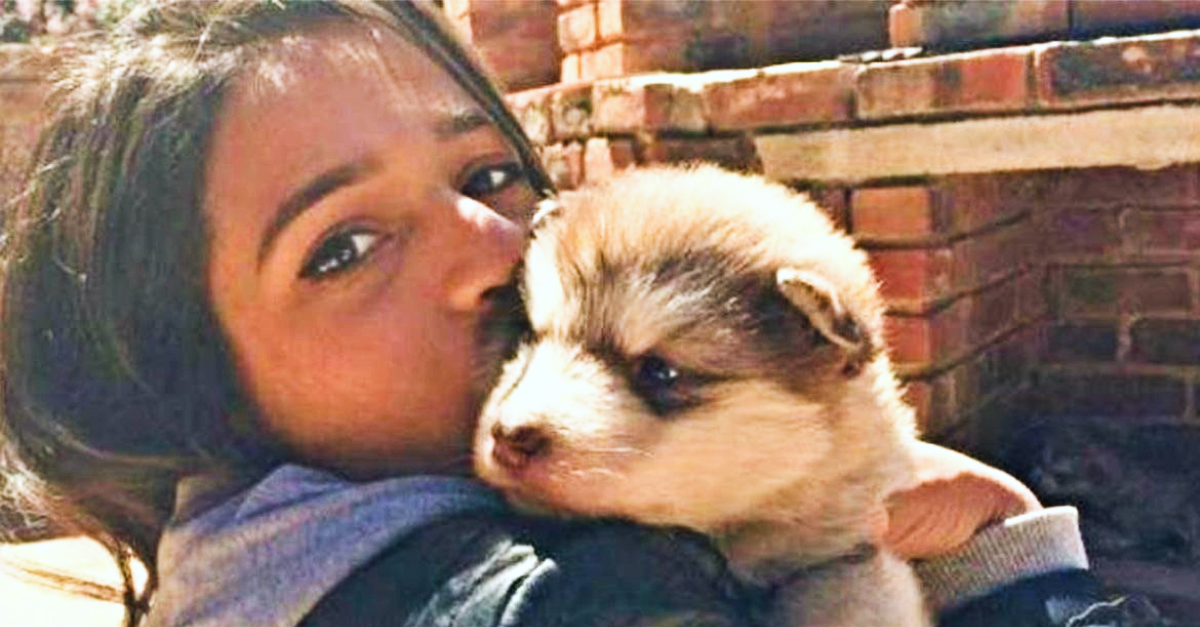 The sight of the adorable balls of fluff instantly had the children pleading with their parents. Although Su Yun and her husband had given adopting a family dog some consideration over the past few weeks, they hadn’t expected to find what they were looking for here, of all places. Perhaps it was meant to be, Su thought as she held one to her chest.

But Su didn’t realize exactly what bringing one of these pups home would entail. 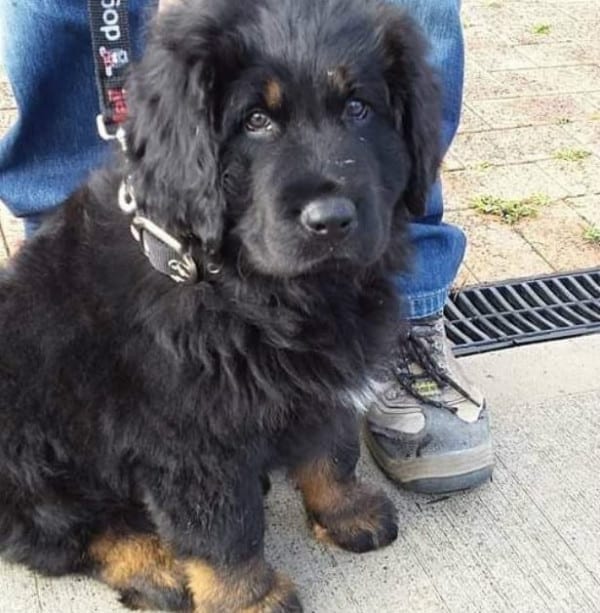 The man who sold the Yuns their new puppy had warned that it was a Tibetan Mastiff and that he could be expected to stand two feet tall when he reached his full size! The Yuns were ecstatic with their new family member and humorously named him “Little Black.” 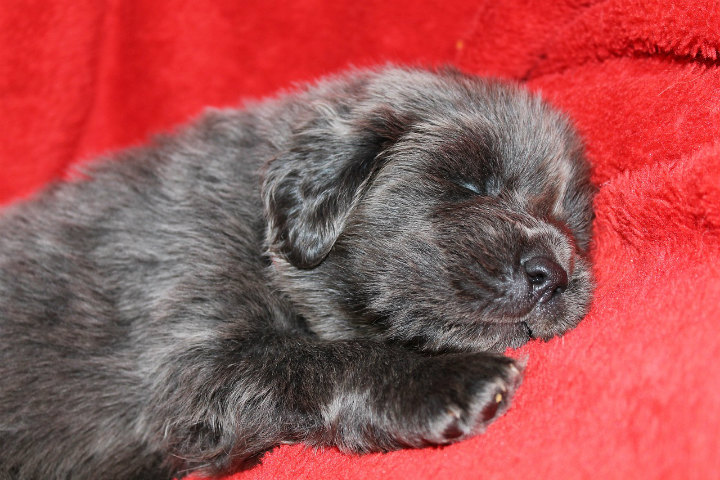 The family felt their bond with their new puppy growing by the day, and soon it was time to return home to Kunming City with their new family member. It was also time to make a decision about where he would sleep. Although the warm climate in Kunming City allowed for dogs to sleep outside, the Yuns decided that Little Black would be an inside dog. Little Black was more than happy to stay close to his new family.

But it wasn’t long before the family began to notice something odd about Little Black. 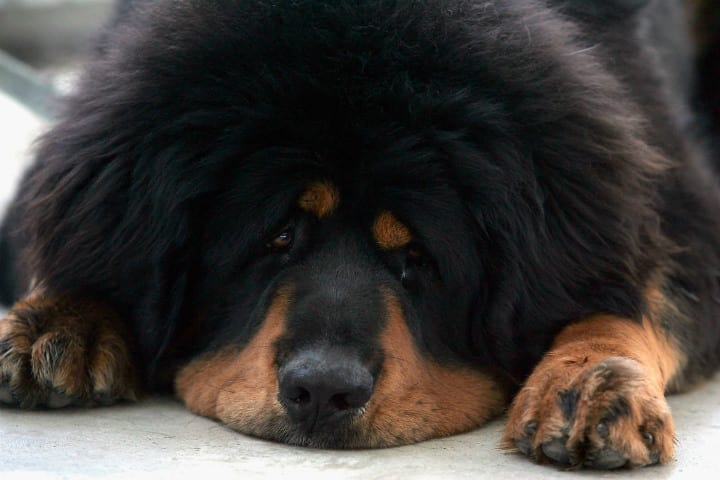 Su Yun thought it was a bit strange that no matter what dog food she’d lay out in front of him, he wouldn’t eat it. The only foods he would eat with enthusiasm were noodles and fruit, and Su obliged. But, being new to dog ownership, she didn’t think much of it and chalked it down to him being fussy.

But soon, Little Black was eating her out of house and home. 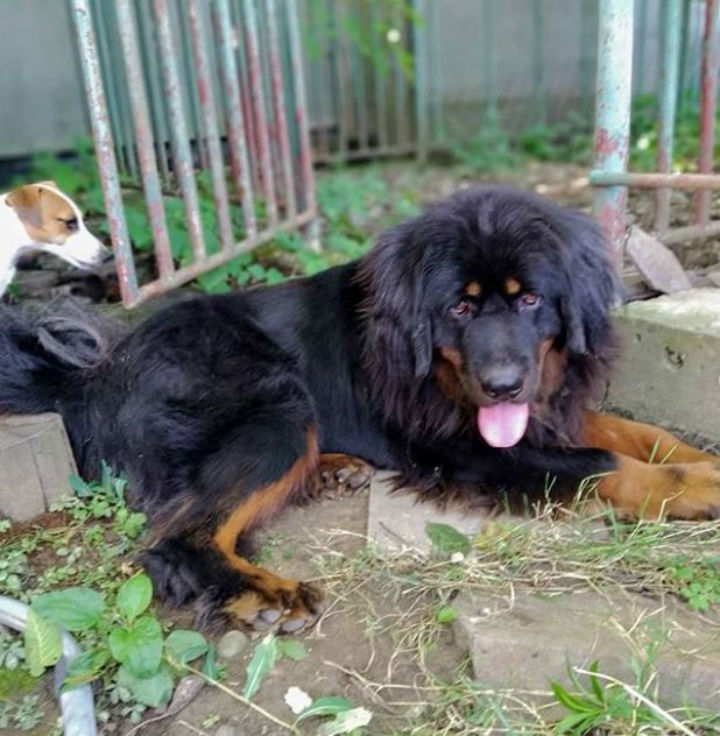 Every day, Little Black would devour an entire box of mixed fruits and two buckets of noodles… and his appetite showed no sign of slowing down! By the time Little Black was a year old, Su Yun had spent a fortune on his food. And, aside from his unusual preference for noodles and fruit, the family began to notice some other worrying characteristics about their new dog. 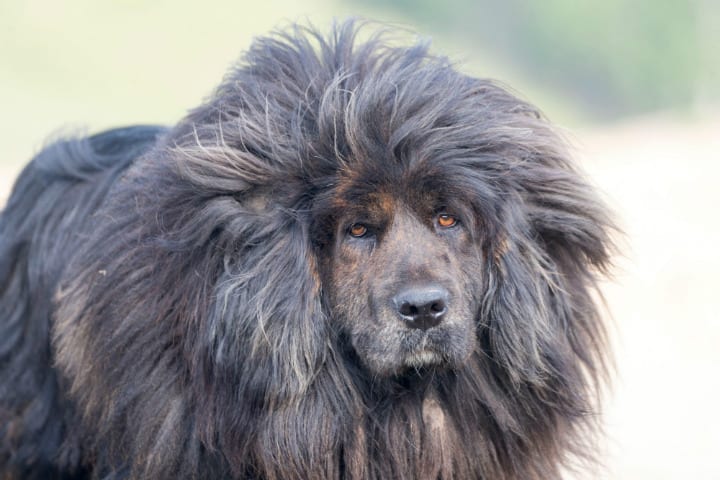 Although Su Yun had expected Little Black to grow up to be a large dog, she wasn’t prepared for just how large he was getting. At two years old, Little Black was now three feet tall and weighed a staggering 250 pounds – much larger than even the seller had anticipated.

But, one day, Su Yun saw Little Black doing something so disturbing in the kitchen that it raised all the red flags. Su Yun walked in to see Little Black standing on his hind legs. Su had seen other dogs stand up like a human while doing tricks or begging for food, but this was different.

It was finally time to come to grips that there was something very strange about this dog. Then, she started to become frightened. 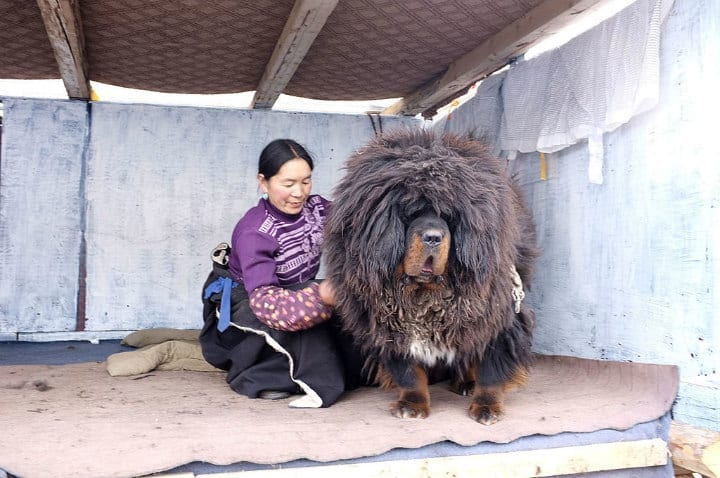 This pup was growing so fast that the family started feeling scared around their dog. Not visible as a puppy were certain features, like the size of his teeth. Little Black was now constantly standing on his hind legs, he disliked walking on all fours. With his size and his enormous white teeth, it was becoming a little frightening to be around him.

But Su Yun was still in denial. 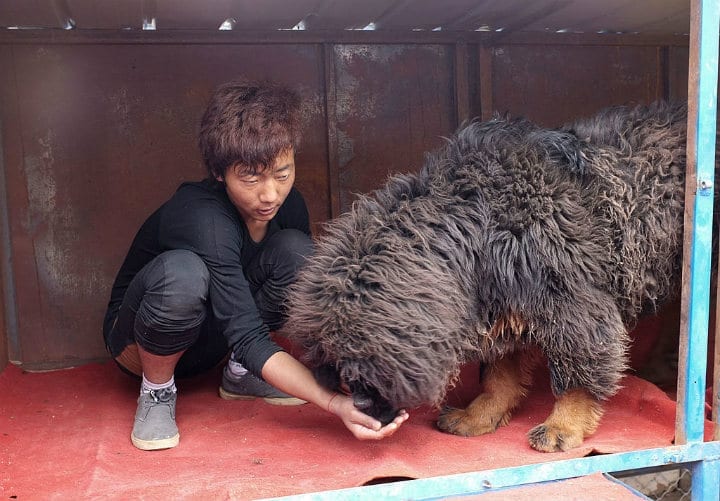 While Su Yun was pushing her fears down, Little Black had started to get a reputation among the neighbors. Walking the enormous dog had become a spectacle, and soon he was too big to live inside the house.

The family built him a makeshift dog house in the yard. But, of course, simply moving him outside didn’t make their problems go away. Now that Little Black was an outside dog, Su Yun expected him to start behaving like one. You would think that he would have taken to guarding the house against intruders and barking at anything that moved. But he never did. Now that Su Yun thought about it, the only sound she’d ever heard him make was a low growl.

It was becoming very clear that she had made a huge mistake. 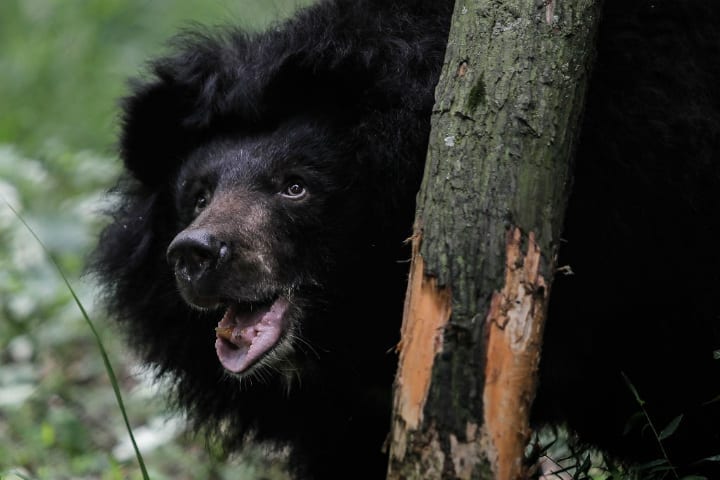 And the bigger Little Black grew, the larger Su Yun’s fears became. Something just didn’t add up. She began to research normal Tibetan Mastiff behavior, but what she found only added to her fears.

She posted a photograph of Little Black online, and a vet on the forum informed her that he’d have to call the police! Little Black was actually an enormous black bear! The vet told her that he was no ordinary black bear, either. He was an Asiatic black bear, also known as a Tibetan Bear or Himalayan Bear.

These bears can reach a height of six feet and weigh a whopping 440 pounds! Then, he told her some information that made her heart drop. Laws in China prohibit owning a bear of any kind, and it’s an offense punishable by jail! Su Yun was indeed in a dire situation. As much as she had grown to love Little Black, she knew she couldn’t keep him. What if he became aggressive toward her or her children? It just wasn’t worth the risk.

In desperation, she thought that she could do something before the authorities became involved. Her first course of action was to call the local zoo.

Unfortunately, the zoo wouldn’t even consider taking Little Black in without the proper paperwork – and she didn’t have his birth certificate. Furthermore, they had bought the bear while on holiday and had no way of contacting the man who had sold him. Su Yun had no recourse. Caught between a rock and a hard place, she had no choice but to call the police herself.

Little did she know, they were already coming for her. Within the hour, the police had arrived at her home with wildlife experts in tow. They had been tipped off by the vet who had seen her post in an animal behaviorist forum. Su Yun had some explaining to do.

She described the predicament she had gotten into and cooperated with the officers, trying to give them all the information they needed to find Little Black a safe new home. But what would the consequences be? “The more [Little Black] grew, the more like a bear he looked,” Su Yun explained. Then she admitted that she was “a little scared of bears.” The police stayed with Su Yun, gathering information, while wildlife officials went out to Little Black to examine him.

They checked him over for any injuries or signs of malnourishment while Su Yun awaited the verdict.

Officials found Little Black to be well-fed and healthy. Now, they would have to tranquilize him so that they could transport him to the local wildlife center. When he arrived, experts were floored – Su Yun had indeed been keeping a dangerous Asiatic Bear in her back yard!

It wasn’t long before the media caught wind of Su Yun’s big mistake. The biggest question everyone wanted an answer to was: how had Su Yun and her family had been oblivious to the fact that their “puppy” was actually an enormous wild animal? It wasn’t long before National Geographic stepped in and covered the story, causing a public outcry and becoming a viral sensation overnight.

Now, with all eyes on her, Su Yun was painfully aware that she may face jail time. 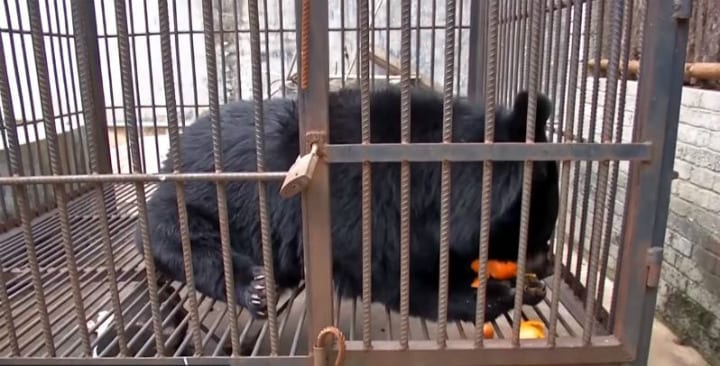 With all the media attention and public outrage, something surprising happened. People began to share their own stories about adopting domestic animals, only to find out some time later that they were another animal entirely.

National Geographic stated that this is not the only case and that it happens a lot more often than you may think. But would Su Yun have to pay for her mistake? Fortunately for Su Yun, her continued cooperation with the authorities was acknowledged and served a key role in their decision about her punishment.

She reiterated that the incident was unfortunate, but had been a case of mistaken identity. After all, the man who had sold her Little Black had claimed that he was a Tibetan Mastiff! Su Yun avoided jail time, despite Asiatic Bears’ protected species status. And although having Little Black moved to a sanctuary nearby was the best decision for the family — and for his own sake — they still miss the pet they knew and looked after for two years.

The good news is that the story has a happy ending: Little Black will continue to live out his days on the reserve and is in good hands.