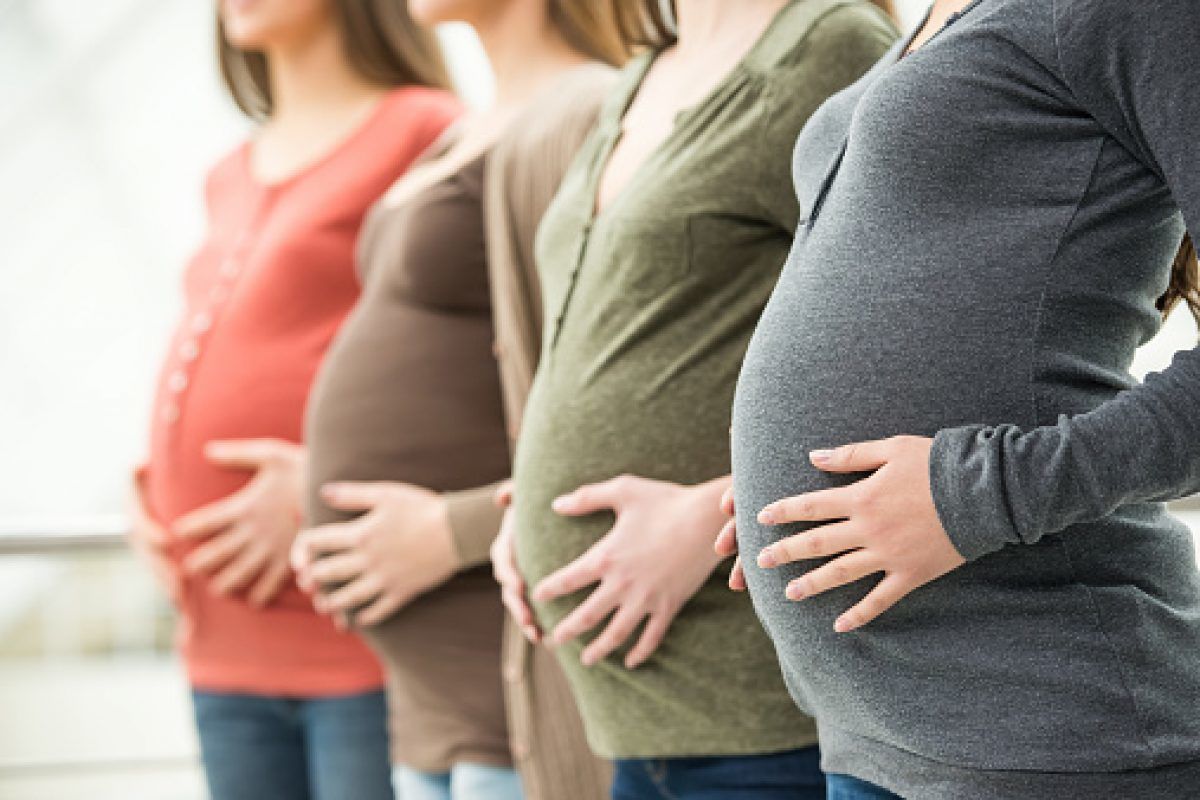 Shaniece had seen it been done before. What would make her experience any different? She took her vitamins and made sure to eat healthily, but she never expected her doctor to discover this.

Shaniece looked from the monitor to her enlarged stomach. She had grown so ginormous during her second trimester, she knew something was wrong. She was always hungry, her back always ached, and she never felt right.

The nurse squeezed jelly onto her skin and held a small instrument to her stomach. “These symptoms are absolutely normal for a first pregnancy,” she explained. The screen blurred between grey and black. She held her breath. “Is everything okay?” Then, the nurse called for a doctor.

Shaniece always wanted her own family. Her parents had been devoted to one another since they were sixteen, and her older sister married her childhood sweetheart the moment they finished school. But she never expected to witness so much pain so early into their marriage.

Shaniece was fourteen when Linda moved out from home to live with her partner. She no longer had to put up with her unbelievable demands or listen to her constant bickering. She thought her life would be easier now that she had more space to herself.

But her home became too quiet. Then, she began to miss the fights. They met on the weekends, but she could feel them slowly drifting apart. So, she decided to get the bus to visit her big sister. But she never expected to find her like this.

As Shaniece walked up the road she noticed her brother-in-law’s red truck driving towards her. She stopped and waved, thinking he would slow down or wave back, but he kept on driving. She had never seen him with such a stern look on his face.

Josh didn’t even notice her. Maybe he had a tough day at work. But when she walked up the hill and knocked on the door to her sister’s home, she was taken aback by the way her sister looked.

Mascara ran down Linda’s cheeks. Her eyes were red, and her face was pale. “Did he hurt you?” Shaniece ran to the kitchen and returned with a damp cloth to wipe her sister’s face. “No, don’t be silly. I asked him to leave.”

Shaniece sat back and studied Linda’s face. She always knew when she was lying. This time, she was telling the truth. Maybe their parents were right. Maybe they were too young to marry. “Why did you ask him to leave, Linda?” But she never expected this answer.

“You know we’ve been trying for a year now, Shaniece.” A stream of tears ran from Linda’s eyes. “He wants to take out another loan for IVF, but we can’t afford it. We couldn’t afford the first treatment.” She wiped her noise and sighed. “We can’t keep doing this.”

Shaniece’s heart ached. She had never seen her sister so upset before. And she knew she would never be happy if she didn’t have a child. So, she put on the kettle, grabbed a blanket, and stayed with her for the weekend. And during that time, she convinced her to try again. But she never expected her encouragement to have such an impact.

It took nearly two years of treatment, but Linda eventually got pregnant. She wanted to keep it a secret until she reached her second trimester but unfortunately, she never made it. After her miscarriage, she didn’t want to try again. But then, she changed her mind.

She became reclusive. And despite Shaniece’s best attempts, Linda didn’t leave the house for a month. But her husband had one last idea to give her what she had always dreamed of.

Josh’s idea was an unorthodox one, but it was Linda’s last chance at happiness. The blow of the miscarriage was still fresh in her mind, and she wasn’t sure of anything anymore. But Josh’s idea gave her hope.

Linda and Josh were about to try to convince Josh’s sister to make an enormous sacrifice. But would she agree? Only time would tell. So Josh invited her around to ask the big question.

They sat across the table from Josh’s sister… fidgeting nervously. Would she agree? All of Linda’s hopes hung on the words Josh’s sister said next.

But Linda would understand if she declined — after all, it was a huge thing to ask someone to do. Then, she looked up and said the three words they never expected.

“I’ll do it”. As soon as the words left Josh’s sister’s mouth, Linda felt fear and excitement wash over her. Finally, she could dream of having a child of her own… she couldn’t thank Josh’s sister enough.

Josh had suggested that his own sister act as a surrogate for their child. She would provide the host-womb for their baby. But Shaniece could never have expected to be so inspired by the young woman’s act of kindness.

Had the woman thought this through? It wouldn’t be easy — but she had agreed. Little did Shaniece know that Josh’s sister would inspire her in the years to come.

Josh’s sister offered to carry their child. Understandably, Linda was hesitant. She didn’t want to get her hopes up again but what was the harm in trying one last time?

If it didn’t work, they could look into fostering—there were plenty of children in need of a good home. Shaniece prayed every night for the pregnancy to take. Then, a miracle happened.

When Josh’s sister gave birth, Shaniece cried for hours. She had never been so happy. If anyone deserved to be a mother, it was Linda. Then she made a promise to herself.

Shaniece swore then that someday, she too would make someone’s dream come true. But when that day finally came, she never expected her experience to be so unique.

Shaniece had just turned 21 when she met Joanna and Steve. And when she informed her family of her decision to give birth to another couple’s baby, they were filled with pride. She flew to Los Angeles to undergo the procedure and then returned home. But things didn’t go as she hoped.

“I was only 21 at the time, but I wasn’t interested in partying and drinking. I wanted to help another couple fulfill their family dream.” Joanna and Steve were over the moon. However, after the first trimester, she knew something was off. And she was right.

The only other surrogate Shaniece had met was Josh’s sister, who worked through sickness, nausea, and sleep deprivation until she was nearly 8 months pregnant. Shaniece was lucky. But still, she couldn’t help but worry.

Pregnancy didn’t have any impact on her daily life. However, when she noticed that her stomach continued to bulge throughout her second trimester, she worried. Babies grow tremendously during the final months of pregnancy. She picked up her phone and called her doctor.

Shaniece was had just finished her second trimester when she visited the doctor for her 10-week scan. She twiddled her thumbs above her bump as she lay on the table. When the doctor returned with paperwork, he was silent.

Was something wrong? Was the baby okay? She would never forgive herself if she let Joanna and Steve down. Then, the doctor looked up from his notes and said three words that sent a chill down her spine.

“You’re having triplets,” Dr. Ryan shared with a smile on his face. Shaniece’s temperature increased. Joanna and Steve wanted one baby, not three. Would they be happy? Would they be mad?

Thankfully, the couple was overjoyed. As weeks passed, Shaniece’s stomach swelled to a ginormous size. Her body ached, but she knew she was doing the right thing. But she didn’t anticipate this.

Shaniece eventually gave birth to three healthy babies—two girls and one boy—Willow, Daisy, and Harrison. “Even though I was only 21 and it was a huge responsibility carrying their babies, it was one of the best experiences of my life,” she happily proclaimed.

“I had no morning sickness or cravings, the whole pregnancy flew by and with the support of Joanna and Steve, it was amazing, and I would recommend it to anyone,” she later shared. But she didn’t say goodbye forever.

After two weeks of intensive care, Willow, Daisy, and Harrison were strong enough to go home for the first time with their parents. Shaniece now visits them every birthday. And for those who have questioned her motives, she’d shed some light on her decision.

“I think a lot of people presume you have to use your own eggs when you’re a surrogate but that’s not the case at all. I had Joanna and Steve’s embryo inserted in Los Angeles so it’s biologically their child not mine, I was just the host womb.”

A Toll On Her Body

But carrying someone else’s babies can also have more than psychological implications, and carrying triplets can have a negative impact on a woman’s body, especially on a mother so young. And Shaniece started to experience them.

“I’m in a relationship now and would like to have more children. I’ve had a miscarriage so I do wonder if carrying the triplets has had an effect on my body,” she said later in an interview. But she also shared some other advice.

“My advice for anyone thinking about surrogacy is make sure you’ve done your research, and that you have support around you,” Shaniece shared. But there are other considerations, too.

“You don’t get paid to be a surrogate – you only get expenses for your travel and so on – so if you’re looking to make money, this isn’t for you,” Shaniece added.

Shaniece’s experience of being a surrogate mother has inspired her to try to change current laws regarding surrogacy in the UK. She feels like parents should have more control.

She says: “Throughout the pregnancy I had all the questions about the babies directed at me, for example, birth plans, vaccinations, scan dates. I would just turn to Joanna and Steve and say, ‘what do you want to do?'”

“…it was my body but they weren’t my babies. If the law could change so the parents could make the decisions it would make things easier on both parts,” she added. Many surrogate mothers feel the same way, too.
Must Read
European Space Agency Budget Increases By 10 Billion For The Next 3 Years
Artemis 1 Finally Launches: What It Means For Space Travel And Exploration
Clam Species Presumed Extinct For 40,000 Years Has Been Found Alive