One of the defining characteristics of life is its adaptability. There is no environment on Earth, at least within the atmosphere, oceans, and crust, that life hasn’t colonized or otherwise made use of. Researchers have identified bacteria in rocks from hundreds of feet below the surface, and now believe that such bacteria—which may equal or exceed the mass of all other living things on Earth combined—play a vital role in various processes linking the biosphere and geosphere.

Earth’s oceans and lakes support an astounding amount of life in a variety of environments, including at deep-sea geothermal vents, and the terrestrial environments are literally carpeted and crawling with life of various sorts. Life has even found its way into the ocean of air that surrounds our planet.

Because our atmosphere is fairly thick, it’s capable of supporting creatures that are somewhat light. True flight, however, depends upon whether a creature is light enough, equipped with the proper features, and willing to make a sincere effort to remain aloft. Numerous species have learned to use the atmosphere to glide.

Flying squirrels and lemurs, for example, use flaps of skin; spiders spin a thread of silk and glide away on the wind; and some types of lizard can flatten and expand their rib-cages in such as way that they act as rudimentary fixed wings.  But this movement through the air can’t be sustained for very long.

True flight is the ability to stay aloft indefinitely, usually by repeatedly flapping various types of wings, and it has evolved no less than three times in the vertebrate phylum: in birds, in bats, and in pterosaurs.

With the possible exception of winged insects, birds are the most obvious fliers in the natural world. The first flying birds appear in the fossil record about 65 million years ago; their feathered ancestors were around as early as 120-150 million years ago, although it’s clear that they didn’t yet fly. While there are many features one might consider birdlike, just one characteristic truly sets birds apart from every other creature that walks, creeps, swims or flies: feathers. 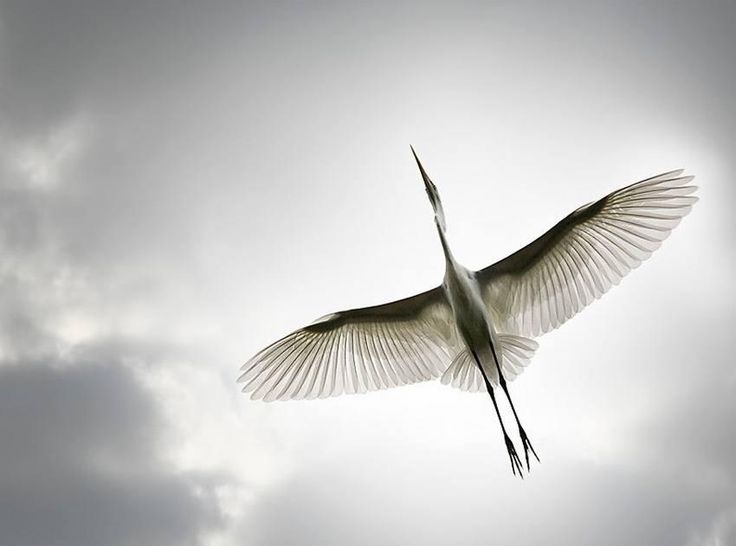 Birds do have other distinguishing features (including scaly feet, egg-laying, beaks and wishbones), but they share all these with other types of animals. Feathers are a uniquely avian trait, a defining characteristic shared only by birds and a few dinosaur ancestors: every bird has feathers, whether it can fly or not. Even the earliest-known true birds, 120-150 million-year-old fossil specimens like Archeopteryx and Hesperornis, possessed fully-formed feathers, as proven by the delicate impressions occasionally preserved with their petrified remains.

Feathers are one of nature’s greatest engineering achievements. Light, yet strong and flexible, they grow back easily if they’re lost. Like our nails and hair, feathers are made of keratin and are considered by many scientists to be the avian equivalent of fur. All feathers have several traits in common. Most feature a rachis, a stiff, hollow-based shaft running the feather’s length. At the base of the rachis base is the calamus, or quill. Branching off the rachis above the calamus are the barbs, each of which consists of hundreds of hooked barbules. These interlock to literally zip together a feather’s barbs, so that the feather can present itself as a solid, flexible sheet. The typical feather has more than 600 barbs and 2,400 barbules, gathered together in vanes on either side of the rachis. 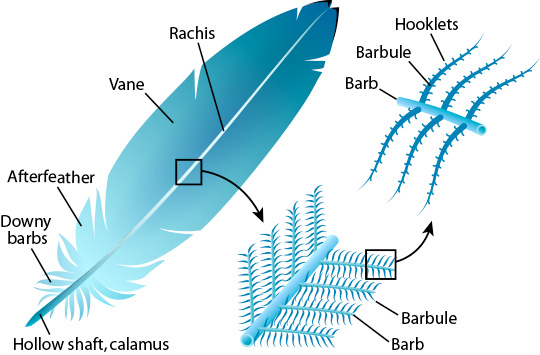 Other traits that demonstrate the adaptation of birds for flight are the development of an elongated forearm, in which all fingers have been lost; the oil glands that allow birds to oil their feathers during preening, aiding in their flightworthiness; and, of course, the hollow bones that drastically lower their weight, making flight easier. Also typical are the wishbone in the breast, which allows for strong attachment of flight muscles.

Birds are extraordinarily successful as a group; more than 8,600 species are known. Although it’s pretty clear that birds are descended from dinosaurs, we still don’t entirely understand how this occurred, or where their defining characteristic, feathers, came from. Bats and insects get along just fine without them, and so did pterosaurs. As one ornithologist K. Parkes once put it, “Why bother inventing anything as complex as a feather?”

Scientists have been debating just this point for decades, but exactly how and why feathers evolved remains a mystery. Most researchers believe the earliest feathers derived from specialized scales reptiles used for temperature regulation, mainly to shield themselves from sunlight (many lizards do this today). They argue that protobirds co-opted the existing structures for flight and display purposes, and their usefulness in that regard spurred further evolution into what we see today. Recent evidence suggests that this was indeed the case. Fossils of dinosaurs with downy feathers have been found in China, and it’s been discovered that a fetal bird’s scutes (the thick scales on the front of their feet) can be stimulated to develop into feathers instead.

Bats have developed another elegant method of flight. Like birds, they have slender, lightweight bones and a compact skeleton, and have evolved strong muscles for flapping flight. However, there are significant differences between bats and birds. Bats are mammals, and represent the only mammals thus far to develop the capacity for natural flight (although flying squirrels and their ilk may be on their way there).

Furthermore, they’ve followed a different evolutionary path than birds on their way to flight.  The most obvious difference is the fact that bat wings are made of a skin membrane, called the patagium, rather than feathers. Furthermore, the hip joint is oriented oddly; it’s rotated about 90 degrees, so that the legs are pointed sideways, while the knee points nearly backward. This aids the bat during flight, and may have evolved to facilitate the bat’s typical downward-hanging rest posture. 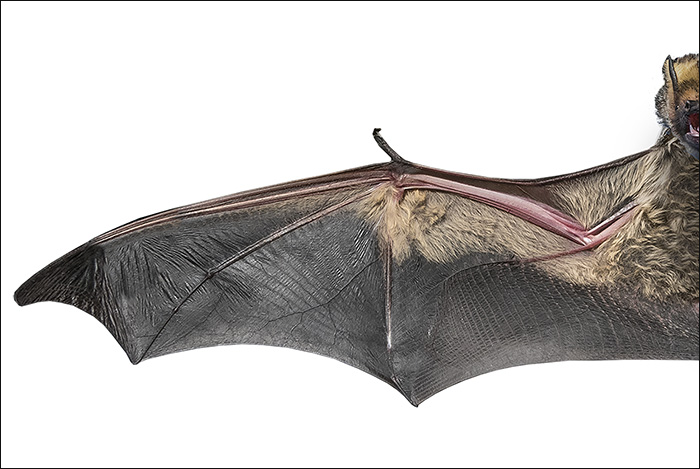 Biologists recognize two groups of bats: the Megachiroptera, or Old World fruit-eating bats, and the Microchiroptera, or echolocating bats. Together, they total about 900 species worldwide. It’s possible they evolved from a small diurnal, fruit-eating mammals, although the bat evolutionary path remains uncertain. The earliest known bats appear in the evolutionary record approximately 50 million years ago, complete with flight, and it’s unclear what their non-flying ancestors might be like. In any case, it seems likely that they evolved from gliding animals similar to flying squirrels, eventually working their way up to true flight over millions of years.

There’s some evidence that the two groups of bats might have evolved separately, despite their great similarity, which would mean that bats developed flight twice; however, most researchers prefer the single-origin theory, since the majority of the evidence points in that direction.  Whether they evolved their echolocation abilities before or after developing flight also remains under debate, though many researchers prefer the latter. They suggest that bats were forced into their largely nocturnal niche by the evolution of raptorial birds, which preyed on them, as owls do even today.

Pterosaurs are an extinct variety of flying reptile, both related to and contemporary with the dinosaurs. They first appeared approximately 200 million years ago, and disappeared, along with the dinosaurs, about 65 million years ago, possibly due to a catastrophic asteroid or comet impact. Approximately 100 species have been identified so far, mostly from incomplete fossil specimens. They varied in size from small specimens the size of sparrows, like Normannognathus, to monsters with 70-foot wingspans, like the Quetzalcoatlus, which was bigger than a DC3 airliner.

Like their fellow vertebrate fliers, they appear to have had light, slender bones that allowed them to reduce their weight, but their body covering hasn’tt been preserved. However, if there was one, it seems likely that it consisted of fine scales or fur rather than feathers. 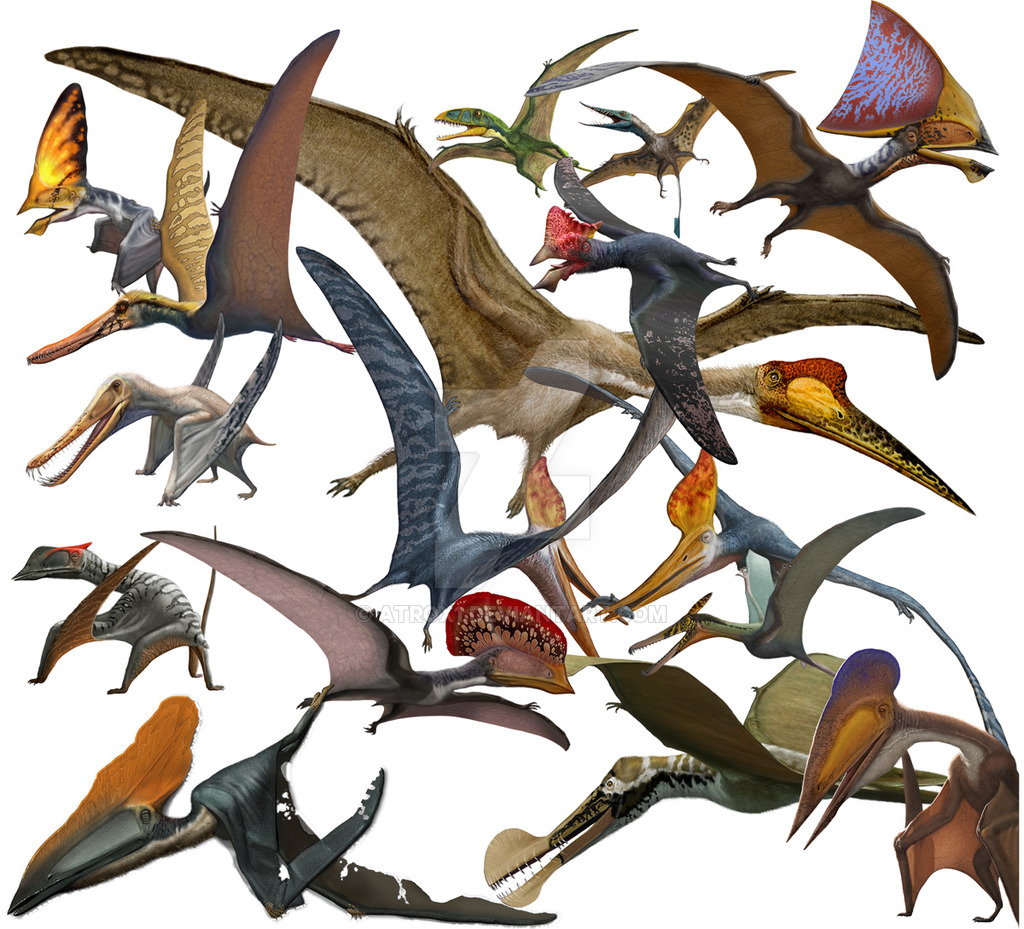 “Pterosaurs” by atrox1 on Deviant Art

Pterosaur wings are similar to those of bats, though the differences are significant. Rather than being stretched between all the fingers, in pterosaurs only the fourth or “pinky” finger was elongated. In addition, the wings were supported by thousands of microscopic fibers, perhaps analogous to a bird’s rachi or barbules, that helped make the wing stiff enough to be aerodynamic. Recent evidence suggests that the wings were attached to the hind limbs, which would make flight more efficient. Many species had long tails, which may have acted as stabilizers during flight.

Since there are no living specimens available, it is uncertain whether or not pterosaurs were good fliers. Certainly they were adequate, but the assumption is that they were cold-blooded, relying more on gliding than flapping. Furthermore, they seem to have lacked the hypertrophied breast muscles found in birds. 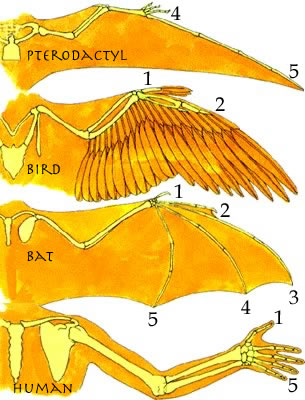 Humans, too, can fly, accounting for a fourth type of vertebrate flight.  Over the past three centuries, we have developed hot-air balloons, fixed-wing aircraft, helicopters, hang gliders, and rocket engines to help us soar through the air.

It’s true that this flying ability is mechanized rather than muscle-powered; some might argue that this doesn’t count, since we’re not using our own effort to fly. However, the fact is that humans are part of the natural world, just like birds, bats, and pterosaurs. That we have not adapted our bodies to fly misses the point; we can fly anyway.

Humans are physically generalized; that is, we possess no special features, like sharp claws, teeth, or specialized running or climbing abilities, that help us to survive. The adaptation we possess is better, because it lets us develop ways to survive and thrive that don’t depend solely on physical traits. Our adaptation is culture, and it’s allowed us to conquer not only the air, but all other terrestrial—and now, some extraterrestrial—environments as well.