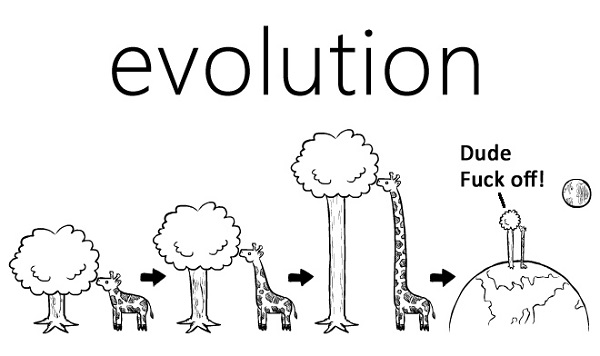 Understanding The Evolution Of The Giraffe And Its Neck

The giraffe has long been the subject of evolution. This is mainly due to its excessively long neck. Even though they only have seven vertebrae, they still boast the longest neck out there amidst land animals. But why was the giraffe the topic of evolution for so long? Well, it really comes down to the argument of two men; Darwin vs. Lamarck. While both had reasonably sound arguments, one trumped the discussion through sheer fact. Read on below to see who was the victor of the two.

In This Corner Of The Giraffe Debate, We Have Jean Baptiste Lamarck!

Lamarck, like Darwin, was a noted naturalist focused on evolution. However, where he differed was in his beliefs of how evolution occurred. Lamarck thought that self-changes would in effect changed the species. Giraffe-ly speaking, a giraffe goes out foraging one day. All it can find is an excessively tall tree, taller than its usual feeding height. It then stretches its neck as far as possible to reach the leaves. This happens over a period of time. Eventually, the giraffe’s neck has been stretched to longer than it was naturally. Lamarck then proffered that this changed genome would be passed down to the giraffe calf. We applaud your efforts Lamarck but step aside for Darwin.

Unlike Lamarck, Darwin believed that breeding, not gene mutation, caused evolution as we know it. Let’s enter into the same scenario. A giraffe goes out foraging. And all it can find are excessively tall trees. The poor giraffe can’t seem to reach the leaves. So, by natural order, the giraffe passes on to the great beyond. Thus, we are left with only tall giraffes who are able to survive thanks to their long necks. Selection in breeding happens when select mates are chosen on their likelihood to survive. Remember that old saying ‘survival of the fittest’? This is where it stems from. If you were more suited to the environment you would survive. Furthermore, the more suited you were to survival you were, the more desirable you would be to other giraffes. So, if you think about giraffes continuously seeking a mate with the longest neck, over time, giraffe calves would begin to naturally bare this trait. That is how evolution occurs.

Think about it. You, as a mom or dad, go out and pierce your ears. You then have a little baby. Will the baby be born with holes in its ears? In short, no. This was Lamarck’s theory in a nutshell. But, if you have brown eyes, and your partner has brown eyes, the chances of your baby being born with brown eyes are pretty high. That right there was Darwin’s theory. You cannot change your own physical appearance in the hope of changing your child. However, you can choose a suitable mate, whose qualities you’d like to see in your kid, to breed with. But on that note, here’s a lighter look at the evolution of the giraffe.