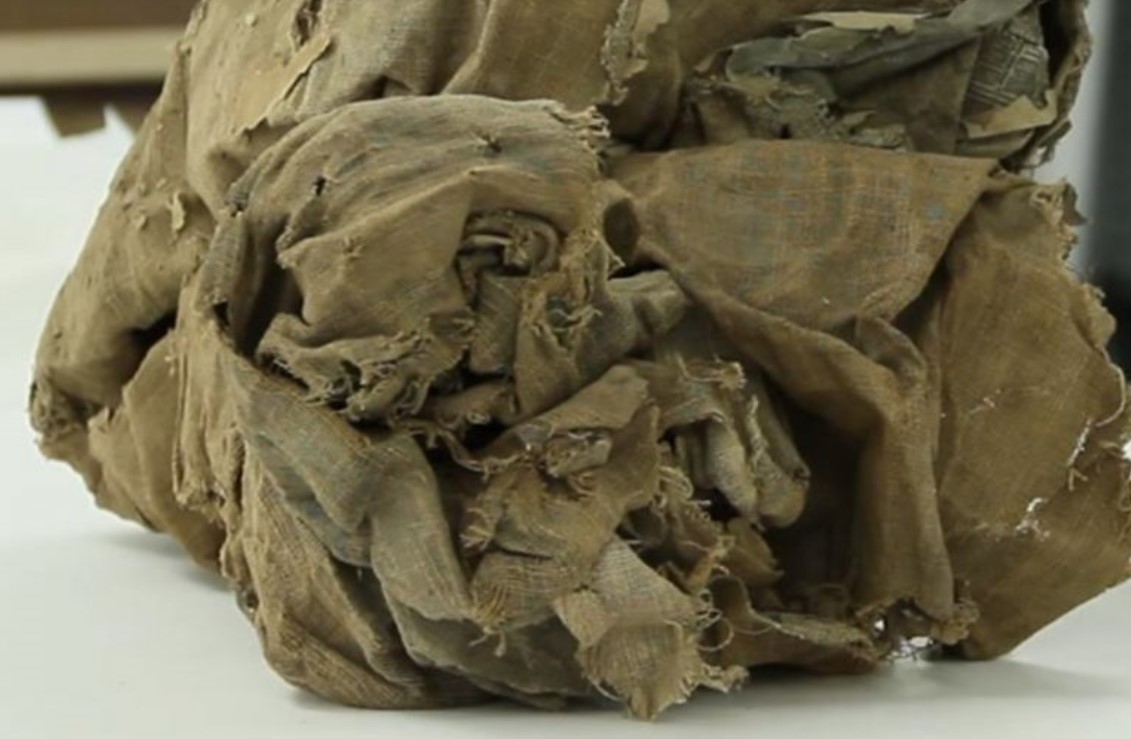 Old houses hold an amazing array of secrets and there are definitely some times when you stumble upon something you had no idea was there in the first place. Knowing the reason to why anyone would hide objects in the strange places we find them would be a story in itself, especially when you find it wedged into a chimney flue.

Renovation specialists and contractors have been known to find a lot of strange objects stashed away between the materials used in previous builds. So, the older the house and the longer ago the renovation the higher the chance is of finding something old, valuable, or both. Then again it’s completely likely that you come across nothing at all, and that’s exactly what it looked like at first.

A renovation team was working on a particularly old building in Aberdeen, Scotland. Apparently, the chimney had never worked and no one had bothered to find out why the house filled with black smoke soon after a fire was lit. It was an old house but it wasn’t a draughty house and the renovators were about to find out why.

The house was fairly average but it was harboring a secret that to this day has not been solved. One of the men on the team looked up the chimney and noticed he couldn’t see past a few bricks in. That might be the reason the chimney didn’t work, someone had stuffed a big wad of something up there and no one could fathom why.

Sticking his hand as far as he could up the flue yielded no results, however, a long stick proved more effective at removing the ragged piece of crumpled trash. It seemed like a ball of dirty rags but when the man looked closer he thought twice about tossing it into the skip and instead boxed it up and gave it to a museum.

The box finally arrived at The National Library of Scotland but nobody was expecting much. All the man had said before handing the box over was that he had found it wedged up a chimney and he thought they would like to have it. However, upon further inspection, conservationists at the Library realized exactly what they had stumbled across…

What the museum discovered was beyond anything they could have imagined, but it was is a terrible state of decay and care had not been taken to preserve its beauty. In fact, everyone was rather baffled as to why it was up a chimney at all. Perhaps to stop a ught? It may have been hastily hidden, but no care had been taken to fold it. All the more was the pity, for it could have been truly beautiful.

As it turned out, this artifact was found to date all the way back to the 17th century! Back then, this would have been a status symbol for whoever owned it. Only wealthy people could afford such a thing, especially one as special as this… Measuring seven feet long and five feet wide, it was huge once they managed to peel it open.

In its time, it would have been hung on a wall with great care for all to see. But where did it come from? At first, it was thought to have originated in London. However, upon further inspection, it was discovered that the artist had copied it off of two men from Amsterdam…

What has come to been known as “The Chimney Map” was first thought to be created by mapmaker George Wildey, but he was not the original artist. Experts believe the original map was created by popular mapmakers, Schenk and Valk, in the 17th century. Both contained eight sheets of paper – which posed a big problem for the library.

Conservationists were concerned that with so many completely damaged layers, it would be nearly impossible to actually restore the map in its entirety and in trying they may be losing precious historical details that no one would be able to get back. But, they had to try.

“Once the map was unfurled I was able to assess its condition, which I must admit filled me with dread,” Claire Thomson, a book and paper conservator at the National Library, says in a statement. “Much of the paper had been lost, and the remainder was hard and brittle in places and soft and thin in others. We needed to stabilize it to prevent any further deterioration, make it robust and easier to handle to get to a point where it could be studied by researchers.”

The Challenge Of A Lifetime

Amazingly, this skilled team of dedicated and patient cartographers worked tirelessly, putting the giant map back together, piece by piece with the most delicate of hands. It was an absurd challenge, and many have admitted that had the preservation of the map been their decision, they would have called it a loss and not even attempted a restoration.

The best way people who saw the map in its original state when it arrived at the museum described it as ‘confetti’. Conservationists didn’t even know if it would be possible to handle the pieces at all, but they rose to the challenge and agreed to take the project on and do the best they could. The library only hoped that the map would remain in great condition for years to come after they carefully, and very slowly, began to finish the restoration process!

Numerous sea battles were coming together on the chimney map, indicating the Dutch colonization of places like Portugal and China. This was a fairly accurate way of guessing what prominent events had happened before the map’s time.

Not All Was Saved

“This is one of the most challenging tasks our conservation team has faced and they have done a terrific job,” National Librarian John Scally says in a statement. “Although significant sections of the map have been lost, the remainder has been cleaned and stabilized for future study and enjoyment.”

This maps time was signaled in the drawings on the map – It showed the Black Legend and as they slowly put more piece of the immense puzzle together, more and more scenes were coming to life. People worked day and night and slowly matched the map up with its own layers. Would all the hours be worth it or a waste?

The map was finally restored to the best condition conservationists could manage, It would never be a complete piece. There were just too many holes and too much damage had taken place from spending all those years in the damp. With some finishing touches, the map was almost ready for a comeback after being stored in a chimney for hundreds of years!

Now displayed in a glass-protected display case, the ‘ball of old rags’ is ready to receive visitors. Historians may only be able to glean so much information from it right now, but they hope that in the future, when a whole new realm of perceptive about the 17th century may be known, people will be able to appreciate it so much more.

More Than It Appeared

This special map and it’s humble journey have seen it end up in the best hands. It was more than worth saving for the researchers of today, and those of tomorrow as well. From a place of status, full circle and back again, but now with a fascinating story to add to its charm, it is an amazing find. Thankfully, the man who found this stuck in that chimney didn’t just throw such an amazing treasure away. Somehow he knew that it was more than what it appeared to be