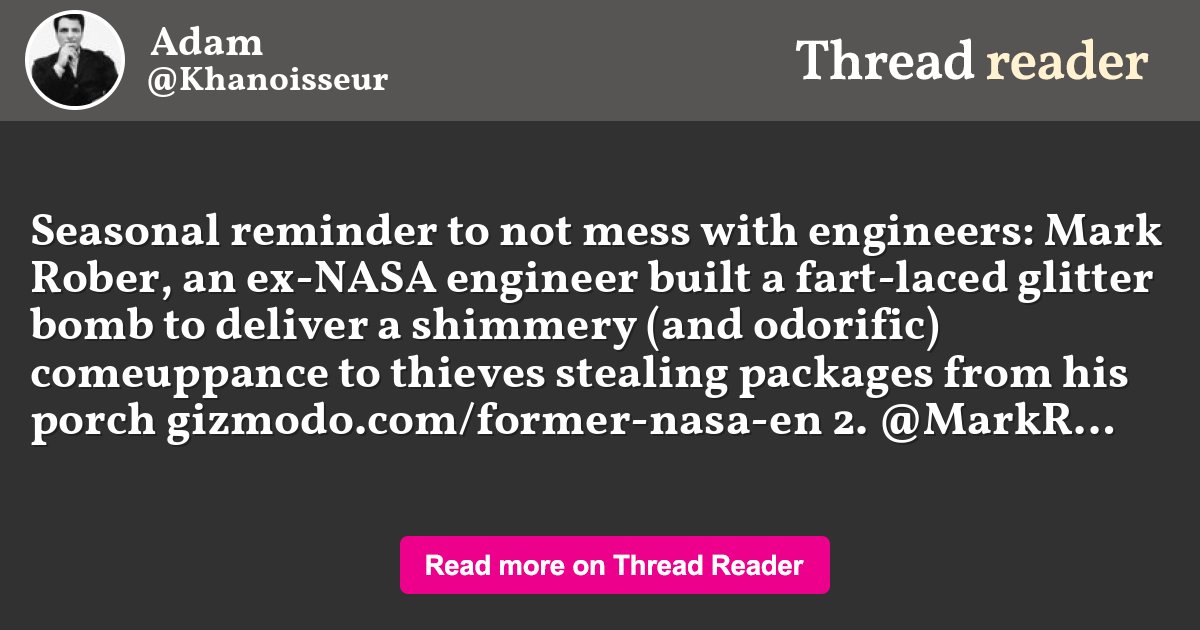 There is something to be said for having to sign for your package. Leaving a box on your porch for an entire day seems too much for people to bear before they get the idea to remove your package for you. These ‘porch pirates’ as you will see are not the hardened criminals you would expect. In fact, you may be rather surprised at just who is taking your mail.

He had had enough.”Porch pirates” had stolen his package for the last time. It was time to get even. And he wasn’t the only one who felt this way. These mad geniuses had a plan…and it wasn’t going to be pretty. It was time to exact revenge in the most spectacular way.

Incredibly, a third of all packages delivered to residential homes in the U.S never make it to their intended recipient. Not because of a broken postal delivery service, but because of greedy ‘porch pirates’, and although they have a cute name their deeds are far from innocent.

No One Is Safe

Of course, there are worse times for theft than others, the holidays for instance, when thieves suspect that your packages will contain wonderful gifts and not the replacement toaster you got yourself online. With the high theft rate, you have probably been a victim too. So, have you dreamed about the ways you would take your revenge? These guys did, and the results were genius.

Alec Armbruster is our first revenge artist and he sweetly recorded the entire process so that we may live vicariously through him. As you can imagine, Alec’s package had been stolen before, often in fact, before he decided to assemble quite a gross package for the next unsuspecting criminal. And he had an unusual accomplice.

It Begins With A Video

The first prank begins with a video that has clearly had time and effort put into it, Alec obviously really got into his revenge tape. The video is titled “I’m sick of my packages being stolen, so I got creative…” and has now been viewed by over 1 million people. It seems that everyone wants a piece of the action, maybe because so many of us have been burned before.

Most impressively, Alec even spends some time by making the box look like a very official delivery, going to the trouble of neatly taping it all up. And then he really goes the extra mile, adding official-looking accessories, such as an authentic-looking printed packing list, taped to the top of the parcel. There was only one thing left to do.

He makes an elaborate video of placing the box on his porch steps, cleverly adding his accomplice cat to the film, watching him through the glass door as he lays his trap. Then the wait begins. It takes a couple of days for the bait to be taken, but taken it is.

The Gift Of A Lifetime

His security camera catches the unsuspecting man walking up to his porch looking for all to see–audaciously strolling up–as though he belongs there. He rings the bell to check if anyone is home before grabbing the package and making a quick getaway. Alec is filled with glee knowing that any minute now, this package thief is about to get his just desserts.

Like many package thieves, this team knew which homes were going to have packages delivered to them, not exactly state of the art tracking… They actually just followed the UPS truck around all day, leaving a 10 minute wait time between the truck and themselves. “They were tailing the UPS truck, which can be seen in security camera footage about 10 minutes prior,” Alec said gleefully.

The package thief, expecting an expensive or useful item, opens the sandy surprise…after a few days on the porch, I’m sure it was smelling rather ripe. Maybe that will teach him a valuable lesson–to keep his thieving fingers to himself! However, other package thieves weren’t so lucky.

The next group of people who decided to go sidewalk shopping with a five-finger discount crossed the wrong man. An engineer named Mark Robert created the ultimate revenge box to deter package thieves, and inside was something far fouler than cat litter. His machine is artfully designed to dish out instant karma, and you’ll see why.

Mark is a former NASA engineer who worked at the Jet Propulsion Laboratory and a nice guy. He doesn’t want to see anyone hurt, but he does want to mess up your car interior… If you happen to be a Porch Pirate that is. Mark’s prank goes so deep that the technical mastery of screwing up someone’s day is absolutely mind-bending.

He begins with this apparently common problem of people not being able to keep their hands to themselves and then he explains his elaborate and mesmerizing plan. So what would you consider the worst way to ruin someone’s day? Without violence of course? Did you say glitter?! Well, that is exactly what Mark thought too. Glitter and a certain odor.

It took Mark six months along with help from a friend to create what must be the most satisfying revenge video for all of you who have suffered at the hands of the Porch Pirates. Not only are the tools used absolutely perfect at distributing glitter into absolutely every nook, cranny and crevice but we get to watch it all go down.

Mark’s video was trending at number #3, that’s how good revenge tastes. His 10-minute video starts with a lengthy introduction explaining how he built his booby trap, designed to douse thieves in glitter and fart spray (of which, he says gleefully, one spray will “clear a room”) and is named “Package Thief vs. Glitter Bomb Trap”.

Unleashing a tornado of gorgeous glitter followed by 5 sprays of fart from a can every 30 seconds it is bound to get reactions. Personally, I slowed it right down to look at the amazing glitter cloud spin and change color over and over again but that’s just me, I think most people would agree that the genius is in the video feedback. From every angle!

Boasting 4 individual iPhones, each triggered by two latches. When the lid of the box is opened it sets a whole lot of things into action. Mark explains: “This custom printed circuit board is the brains of the operation. It has a built-in accelerometer and when it’s jostled that will check the GPS signal to see if it’s been moved from the porch. And if so it sends a signal to all the phones to wake up and start recording and I’m using four phones that have a wide-angle.”

Nothing But The Best

“Ultimately when they open their package I just want to celebrate their choice of profession with a cloud of glitter, because who doesn’t love glitter?” he continued “…and because the phones have GPS we created a virtual geo-fence around my house so I get a notification when the package has been moved off the property.”

And it was not long before that happened. The best part? Seeing the footage… “So it appears he was walking down the pavement and then suddenly makes a hard left. Then he takes the package and gets in his car and eventually makes it to this garage where this glorious sequence unfolds,” Mark narrates in glee.

The first worthy victim is a young thief and he was really not impressed but you can hear in his voice that he knew he deserved it. He whines to a friend, “My car dude. It’s all over my car. [It’s on] Everything!” And the second group, they don’t manage to open it properly so it wasn’t so visual, but everyone in the car is yelling to ‘Throw it out!’ and ‘What’s that smell?”

Of all the thieves caught out by this fantastic gadget, I think the man shown last is my favorite. He managed to hold in the excitement of opening the package until he got home. As the lid is lifted off you hear and see the glitter being flung across the room and he just stands there, absolutely still and silently. The device plays a recording, “Keep the change you filthy animal.”

The dazed man has a look of resignation on his defeated face as he fetches a vacuum cleaner and starts trying to clean up the devastation left by Mark’s device of Instant Karma. A layer of fine glitter covers every surface of the room, and the camera keeps rolling. You almost feel sorry for this hapless package thief. Almost.

Mark’s viral footage of package thieves receiving their comeuppance and the spectacular device that made it all possible has become an instant hit among netizens. After all, what’s better than watching a smug porch pirate excitedly open his ill-gotten loot–just to have it all blow up in his face!
Must Read
Human Geneticists Finally Apologize For Horrific Past Experiments On Humans
The World Is Now 90 Seconds To Midnight
New Study Suggests Teacher Evaluations May Perpetuate Academia's Gender Biases