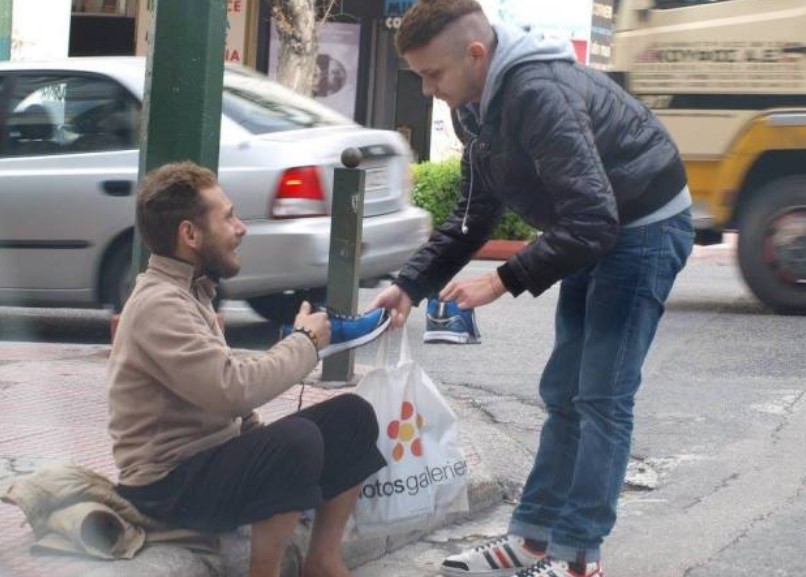 What was this, sitting on the counter? He picked it up and inspected it. It was an envelope. Curious, he opened it up, and when he saw what was inside his heart started to race. He pushed past the line of confused onlookers and ran as fast as he could, past the security guards, gripping the envelope to tightly to his chest.

Family man Rob Edwards couldn’t believe the week he was having. The weather in Florida was balmy and life was good. He looked at his beautiful wife in awe as they sat and ate breakfast together. They had recently celebrated their 21 year anniversary, and Rob couldn’t be happier. But there was something else to celebrate, too.

Cole, Rob’s eldest, had just finished high school and the family was gearing up for the graduation ceremony. Everything Rob did for his son in the last 18 years had been in preparation for this momentous day. His children were his pride and joy. But Rob never expected what this particular day had in store for him.

Rob awoke early on the big day to run some errands. First on the list was a trip to the bank. He breezed through the traffic, humming as he drove. He pulled up to the concrete building and looked for a parking space, noting that the bank looked rather busy on this particular morning. But not even a long bank queue could dull his spirits today.

As he entered the building he noticed a woman hurrying behind him, so he turned and held the door open for her. There was always room for chivalry, Rob thought to himself as she smiled and thanked him graciously. Then he motioned for the stranger to go ahead of him, and she looked at him in disbelief.

Rob nodded and smiled at the woman, and said that she should get in line ahead of him. He still had time to get his errands done before the graduation ceremony started, so he was in no hurry. At first, she refused, but when she saw Rob’s sincere and smiling face, she thanked him and accepted.

“By all means go in front of me. Today my son graduates,” Rob said happily. “I’m slowing down and want to savor every minute.” The woman laughed, and the pair began to chit-chat while they waited for the long line of people to move. Rob told her about his son Cole and his daughter Taylor, and the woman exchanged some information about her own family.

Eventually, the line had moved up and it was the woman’s turn to be served by the teller. She beamed at Rob as she broke away from the queue, waving as she went. Rob, thinking that their exchange was over, smiled back at her. But he had no idea that this woman had a plan up her sleeve.

When it was Rob’s turn to be served, he strode over to the teller with a smile and completed his transaction. But just moments later, his smile faded to a look of confusion as he felt something being slipped under his left arm, which was resting on the counter. He turned quickly to see the mysterious woman hurrying past him.

Rob looked down to see that a plain envelope had been slipped under his elbow, then the woman said something as she passed, but he didn’t quite catch it. He eyed the envelope and his mind raced. All his optimism had turned to suspicion as he speculated as to what it could possibly contain, but he was about to be completely blindsided.

Rob stood for a few moments, dazed. He turned to the confused people waiting in line behind him with a puzzled expression, but the blank faces had no more answers about the woman’s strange behavior than he did. There was only one way to find out what was in the envelope. He had to open it. So he took a deep breath and tore the seal.

Rob held the suspicious envelope at arm’s length before gingerly peering inside. His heart started to pound. It was too late to go back now, but he knew that he just may have made a very big mistake. At first glance, he thought that the envelope was empty. But when he pulled the sides of the paper apart his mouth opened in disbelief.

Rob’s mind had played out every scenario before he had opened up the envelope. He was, after all, in a bank. He glanced desperately over to the doors and was relieved to see two uniformed security guards standing there–just in case. Thankfully, he wouldn’t need their assistance just yet. But the contents of the envelope were so completely unexpected that he took a double-take.

Inside the envelope was money…But why? Rob immediately grabbed his paperwork from off the counter and made a mad dash to the door. He had to find the mysterious woman, but as he stepped onto the sidewalk, he thought he was too late, and she was long gone. But he needed to know why she had slipped him the envelope of cash.

Searching the crowd in both directions, there was no sign of her. Then, by sheer luck, he looked ahead and noticed her getting into her car in the distance. Without a moment’s thought, Rob ran across the road to catch her, but she was already pulling away from the parking lot. She saw Rob running at her car and rolled down her window.

Rob reached the car and caught his breath while the woman watched in amazement. Then Rob said, “I can’t take this!” and tried to give the envelope back to her through the window. But then, the woman calmly explained why she had decided to slip him the envelope with the $50 inside, and Rob was floored.

“When you talk about your boy, you glow” the woman explained. “You’re a blessing to him, I want to bless him too!” Rob’s face, when he had talked about his son, had been beaming with pride, and the mysterious woman had been touched by his fatherly love. When Rob understood, he was at a loss for words. So, he snapped a picture of the kind woman, and went about his errands.

During Cole’s graduation ceremony, Rob was so filled with happiness he thought he might burst. But the day’s unexpected events played heavily on his mind. There was still one more thing to do. So he uploaded the photo of the mysterious woman onto Facebook with a post explaining what had transpired between them that day, but he didn’t expect the response he would receive.

One commenter wrote: “First of all kid, I can’t believe your boy is 18! Second, I’ve been thinking a lot about the transformational power of love and kindness. Our life is as a vapor…it is here and then it’s gone. Thanks for sharing your blessings…” People loved Rob’s story about random acts of kindness and paying it forward.

“The whole point of life right here! And it could not have happened to a more deserving person. Great story Rob Edwards! And so well told, as per usual. When you write a book look me up. I reckon I got a few titles for you already!” one of Rob’s friends added.

“I was so touched. I don’t know her name, I’ve never ever seen her before. But I will never forget her love. I asked to take a picture with her. And hugged her neck. We need more of this in the world today,” Rob wrote, “…not the money. But kindness. I hugged a complete stranger today. My son who I love with all my heart was shown love.” Then, Rob went on to explain how touched he had been by the stranger’s gesture.

“Many of you who know me know what I believe in. Sounds kinda familiar don’t it. It warms the father’s heart to love the son. I am blessed. Cole Edwards I’m so proud of you! To my bank customer friend. THANK YOU!” Rob continued. And his story is just one of many out there about paying it forward.

The tradition of random acts of kindness has gained popularity in the US, and even has an entire day dedicated to it. National Random Acts Of Kindness Day is celebrated by groups, individuals, and organizations to encourage acts of kindness in the month of February. The principal is simple: perform a small act of kindness for a stranger. But Rob’s story shows that people don’t need an excuse to be kind on only one particular day of the year!

“What a precious story! Thank you for sharing! God bless her for sharing love and being an example of what love looks like. We need more love in the world!!!” another commenter wrote on Rob’s post. But surprisingly, Rob isn’t the only one to ever receive an envelope of cash from a stranger!

An Imgur user known as gingersnap1316 had another heartwarming story to tell about an unexpected act of kindness. One day, while she was home alone, the doorbell wouldn’t stop ringing. Annoyed, she finally answered the door on the third ring, only to see a stranger standing there. He then asked her a strange question.

“Are you Karen?” she describes the encounter on Imgur. “I told him no, that Karen was my mom and he gave a quick smile and handed me an unmarked envelope and walked away. I get inside and open it up.” Thinking the encounter was somewhat strange, our Imgur user was flabberghasted to find $1,000 in cash in the envelope, as well as a letter.

“Please accept this gift as an act of random kindness,” the letter read. “A cherished member of our family devoted much of her time and resources to helping people through ‘Random Acts Of Kindness’. She gave to others in many ways, and always did so anonymously. One way our family has chosen to honor her memory is to continue in the tradition of helping others in the community with acts of random kindness.”

The Spirit Of Giving

The letter then went on: “A ‘Random Act Of Kindness’ does not have to involve the giving of money. It can be as simple as sharing your time with someone, lending an ear, or offering a compliment. The most important part is that the act is unsolicited and done so with no expectation of anything in return.”

Needless to say, the recipient of the Random Act Of Kindness was sure to pay it forward. And it’s stories like these that restore people’s faith in humanity–so always remember to be kind. It’s often the smallest gestures that mean the world to someone, even if it’s just a smile.
Must Read
Genome Studies Manage To Find A New Branch Of Fungal Evolution
European Space Agency Budget Increases By 10 Billion For The Next 3 Years
Artemis 1 Finally Launches: What It Means For Space Travel And Exploration