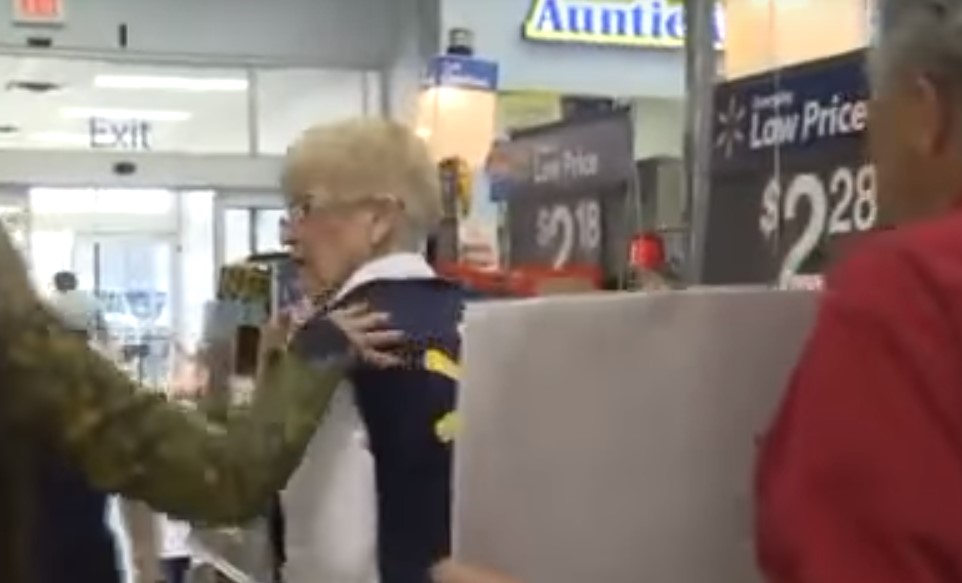 It was an ordinary day like so many ​others. She made her way to work and started it with a huge smile. But as the day went on, she got a surprise visitor. In one split second, she would be transported back to 1959 and the smile she started her day off with would quickly be wiped away.

Renate Stumpf, a German native, had a strict​ upbringing. At only 18 years old her parents didn’t have enough money to send her to college, so she needed to find a job to help them out — and she did. Renate found a job at an army base in Germany in the late 1950s but, little did she know, she wouldn’t be staying in Germany for long.

There at the army base,​ she met the love of her life — or so she thought. Renate worked in the army base kitchen preparing and serving food for the soldiers. But one day, a man was mesmerized by Renate and her cooking. This was just the beginning of their story.

​Renate was working in the kitchen that day when a young soldier approached her. This young man was Louis Demetriades, who was stationed at the same base Renate was in. Both of them were 18, so they had a lot in common, and this sparked massive chemistry between them. But it was not until Louis asked Renate to make him a burger that he fell in love.

“The first time I ever saw him, he asked me if I could fix him a hamburger. He liked who he saw, so he asked to go help me out in the kitchen.” Renate told ABC news. These two lovebirds quickly married. But then, Louis got an offer to work in the U.S that he could not, and would not, refuse.

Subsequently, both Renate and Louis moved to the United States and began a family. Love kept blossoming for them, but they would still have hardships they would have to endure in the future. They integrated themselves pretty well into America, but still, Renate couldn’t handle the language barrier.

Renate had never studied English, and it was very hard for her to communicate in the language and understand her surroundings easily. That is where things started going south for the couple. “We had little financial support, I didn’t know anything, ​and I could barely speak English,” Renate told ABC News. “We started arguing about every little thing.”

In the years that followed, Louis and Renate decided to get a divorce. This decision was not an easy one but they knew it was the right one, for both of them. They moved on with their lives but still, Louis could not forget Renate so easily. Louis married and relocated to Memphis, Tennessee.

Renate also remarried and lived happily with her new husband. But even though Renate and Louis shared children, they weren’t in contact whatsoever. 40 years had passed, but Louis had some unfinished business he needed to settle with his old flame. Renate went to work that day, like any other. But while she was speaking to a customer, she sensed someone behind her.

Renate slowly turned around and saw Louis standing there, and she recognized him instantly. Emotions washed over her like a tidal wave. At first, she felt surprised, and then angry. Then she felt overwhelming confusion that was quickly replaced with curiosity. What could Louis want from her after all this time? And how had he found her?

You see, Louis had secretly contacted Renate’s daughter on Facebook. Her daughter had warned him that Renate may not react well to his plan, but still gave him all the information he needed. Renate had no idea all of this was happening. But once she turned around and saw him, she started shaking.

Ghost From The Past

At first, Renate had thought nothing of seeing her children approach her. Her kids would come to say “hi” from time to time while she was working, but when she turned and saw her ex-husband standing behind her, she knew in her heart that Louis and her own children had set her up.

Renate could not believe what she was seeing. She had not seen Louis in 43 years! And​ there he was, standing right in front of her. But what did he want from her after being apart for so long? And more importantly, did Renate even want to see him? Then, she saw the sign he was holding in his hands, and it all made sense.

Louis had wanted that day to be more than special; he​ had planned everything. He had talked to Renate’s employer and the people she worked with, and let them in on his plan. He even had one of Renate’s daughters capture everything on camera. But that was not all.

Louis was holding a sign. But first, as their eyes locked, he said: “Hey good looking,” and put the sign up so she could read it. As soon as she did, Renate immediately started to cry. The sign read: “Happy Valentine’s Day!” but that wasn’t all. Renate continued to read, and then broke down.

“Will you marry me?” was scrawled at the bottom of Louis’ sign. Renate was at a loss for words, but then she went in for a hug. The pair embraced and it was clear to see that the love that there once was had never left these two. Still, Louis was looking for an answer to his question on the sign, but Renate’s answer was not exactly what he had expected.

“No,” Renate jokingly responded, before adding, “Yes, but not today!” Renate gasped. Even though Louis was hoping for a “yes”, he was ok with her answer and they both chuckled. But still, she went on to explain why she had decided to decline Louis’ proposal on the spot… for now.

“43 years is a long time, and to say ‘yes’ right away, I’m gonna have to test him a little bit first!” she revealed. Even though Renate and Louis’ spouses had long since passed on, it was still not an easy decision — after all, the couple had failed to make things work the first time around. But perhaps the pair have some new insights into their relationship now that 43 years have passed.

“I will marry him, though, because he’s a good man,” Renate admitted. Their marriage had been tricky, and full of ups and downs, so Renate was wise to take everything slow. Hopefully, after 43 years, the pair can work out their differences. But why did Louis plan everything as​ he did?

He wanted her to share this day with her friends and loved ones. Renate is an incredibly social woman and he knew that this would not only be a shock to her but also, all of her friends would be there too. He wanted to declare his love for Renate among all the people she cherished the most.

“Why did I come to Walmart to propose to my wife again?” Louis said in an interview. “It’s because she has so many friends here, and I knew she would like to share that with them,” he explained. But how did he know his proposal would be well-received? It was a big risk to pop the question in such a public place!

The video of Louis’ surprise proposal to the woman he hadn’t seen in over 40 years became an internet sensation, with the original video garnering over 600,000 views. soon, local news channels snapped up the story, too. People just can’t get over such a surprising and heartwarming reunion, and all were enamored by the 75-year-old love story.

As the story went viral, people couldn’t help but comment on what they thought about this incredible story. Some commenters even knew Renate! “This makes you feel great,” one lady said. “[Renate’s] my favorite cashier too!”

Another woman commented; “I’ve known Renate for many years and her family, [and] she is by far the sweetest lady around, I love how she is, and I’m happy for her. She is amazing.” Renate is obviously well-loved by her colleagues and clients at Walmart, but what did people have to say about Louis’ surprise?

Some commenters were ecstatic for the reunited lovebirds: “It took him 43 years to figure out that he let a diamond go the first time around? Good for them!” and another: “Don’t wait too long, you are not spring chickens!” But not all comments were positive, and some cautioned Renate to be careful about her decision.

One woman wrote: “WOW!!!. It only took 43 yrs to wake up. Remember why you divorced the first time. CAUTION take your time when making your decision.” And another: “Remember, you divorced for a reason…..think this decision through.” But Renate wasn’t about to let anyone sway her, she knew what she needed to do.

Even after 43 years of not knowing anything about each other, these two connected and made their love spark again. They had seen each other once before this surprise encounter, and they knew right there and then. “When we saw each other again last December, we knew right then we still loved each other for sure,” Renate told ABC News. “That love has never passed.”

Renate and Louis became a couple again, and this time they knew they had to do things the right way. First, Renate wanted to take it slow. “There’s no rush at my age,” she told ABC News. “God put us together again, and it couldn’t be any other way after all these years.”

She insisted that they are in no way rushing to be married, ​but they want to enjoy every minute as a happy couple together. It just goes to show you that if it’s meant to be, it’s meant to be — even after more than 40 years have passed! The spark of one’s first love is never so easily forgotten.

Louis’ determination and undying love for his first wife prompted him to plan carefully, and his actions were not without risk. He drove all the way from Tennessee to the Walmart where Renate was working to ensure that he gave her the Valentine’s surprise of a lifetime, and he wasn’t even sure if she would want to see him again after 43 years! What do you think of Louis’ gutsy proposal?
Must Read
Three Indigenous Tribes In The United States Will Get $75 Million For Relocation Due To Climate Change
A New Supercomputer Simulation Animates An Incredibly Accurate Look At Universal Evolution
Genome Studies Manage To Find A New Branch Of Fungal Evolution