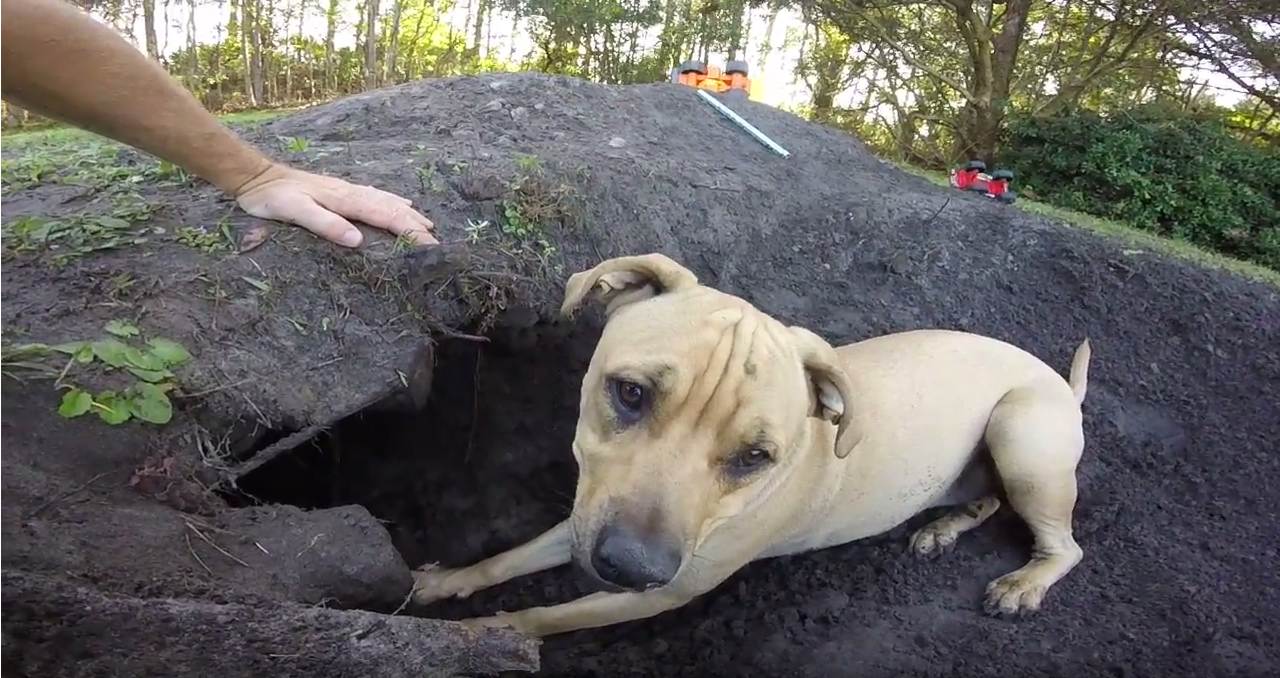 The dogs were more excited than usual today. They dashed on ahead into the trees and out of sight. When they finally caught up, they saw that their cream labrador was digging furiously. “What you got there, boy?” she called, but as she drew nearer, she saw it…something rusted, sticking out from the dirt.

The fateful walk began simply enough, our Californian couple (who wish to remain unnamed) was out strolling through the wooded area of their sprawling property with their pack of dogs, as they did every weekend. But they never expected to find something so incredible hidden there, right in their neighbor’s yard, where it had lain untouched for over a century. They were about to make a discovery that would change their lives.

Digging In The Dirt

As the dog continued to dig furiously, he started to uncover the mystery. An old and rusted paint can started to emerge from the soil, and the couple noticed it immediately. Curious, they started to dig around it with a stick until they could lift it from its hiding place. It was heavy and sealed shut with an old, rusted lid. Someone had taken great care to conceal whatever was inside, but why?

The man tried to muscle open the container, but it was rusted firmly shut. He held it up to his ear and shook it carefully from side to side, and the contents moved with a weighty “clack, clack.” What could possibly be inside? Our now-famous couple would have to wait a little longer to find out.

The couple’s lazy stroll had been disrupted. They turned around and made a beeline for their home, where they could find something to pry the lid of the mysterious container open and reveal what lay inside. Wild speculations flew through their excited minds, but they could never have imagined the enormity of what they had just stumbled upon.

The walk home seemed to last for hours as their anticipation grew. Every homeowner dreams of discovering something exciting on his property, and they took wild guesses as to what could be inside the old can. It was clearly old, but just how old? He imagined that it was filled with mementos– jewelry and valuables that had been stashed away during WWII. She jokingly said maybe it was just filled with rocks and dirt, but how very wrong both guesses were.

The Rusty Old Can

Finally, their home was in sight. He rushed to fetch a pair of pliers and a hacksaw, while she waited in the back garden. Finally, he emerged with a wide grin and began the task of opening the rusted old can. He squeezed the top firmly with the pliers and twisted, and the lid came loose, spraying dried clods of dirt and dust as it fell. Barely containing himself, he peered inside.

His first glimpse into the darkness inside the can didn’t reveal much about its contents, and he was dismayed to see that his wife had been right–there was indeed dirt and gravel inside. The soil inside was damp and packed, but then something shiny caught his eye as it caught the light and he knew that they would have to dig deeper to reveal the contents inside.

He gingerly poked around inside the can with his finger, getting damp soil under his nails. Then, his fingertips felt something different, sticking out from beneath the sand and gravel that had been packed into the rusty old paint can. Something cool and smooth, with ribbed edges. Something that felt like metal. “I’ve found something,” he whispered, and his wife jumped up and down with excitement.

“Pull it out, carefully,” she said excitedly, barely able to contain herself as her husband pulled a shiny coin from the debris at the bottom of the can. It was old and dirty, but it still gleamed. The couple looked at each other for a second, eyes wide in amazement, before the man shoved his hand into the can again, this time to pull out a handful of the mysterious coins.

As coin after coin emerged, the couple gasped in amazement. After gently wiping the mud away from them with a sleeve, they held them in the light to get a better look. The first one was dated 1886, it was unbelievable! The couple grabbed the remaining coins on the table to inspect, and the other coins in the mysterious stash didn’t disappoint.

All in all, there were over 100 of the old coins in the rusty can, the couple couldn’t believe their luck! And the more they pulled out, the more their astonishment grew. Little did they know, the rusted can was just the beginning of the mystery. But where had the coins come from? And just how much would the old coins be worth?

At that moment, the lucky couple only had one question on their mind: were there more coins stashed in the ground on the property? There was only one way to find out. So they set out to the place they had found the first stash in search of more buried treasure. To their delight, with a little digging they started to uncover more rusted cans.

Can after can was pulled from the earth, and coin after coin was found inside the old cans. The stash seemed never-ending. The couple was thrilled with their unexpected windfall, after all, who actually finds buried treasure? The sheer scale of the coin hoard they had stumbled upon turned out to be jaw-dropping.

Most of the coins were from 1847 and 1894, making the coins over a century old, dating back to California’s Gold Rush days in the 1800s. But the date alone wouldn’t determine the true value of the coins, it was also the sheer volume. The Californian couple had unearthed a staggering total of 1,400 old coins–and even more surprising, they were in amazing condition.

As soon as the excitement died down and an appraiser was called in, the couple was given the news. Most of the coins that they had found were $20 gold pieces, also known as double eagles. And the surprises just kept coming. Douglas Mudd, the director and curator of the American Numismatic Association’s Money explained that some of the coins in the hoard were even rarer, such as the $5 piece known as a Dahlonega half eagle. But just where had the coins come from?

When experts inspected the gold coins they speculated that, based on the dates of the coins and the cans they were found in, the coin hoard may have been slowly buried over a span of time. The total face value of the coins $28,000. “That was a lot of money in the late 1800s,” Mudd explains. “A huge amount.” But who would have buried a fortune in the ground?

Where Did It Come From?

“You get a lot of hoards in Europe—coins buried for hundreds or thousands of years,” says Mudd, “but they’re less common in the U.S. Our history isn’t that long, and for most of the time we’ve had banks, so people have tended to put their money there.” So that leaves only a few likely explanations for the “Saddle Ridge Hoard,” as the collection has come to be known.

The massive stash of coins was most probably buried on the couple’s land by an outlaw on the run, says Mudd. A book called Gold Is the Key makes a link between the coins and a local bank robbery and murder in 1859. But just how much is the incredible find worth? The answer to the coins’ estimated value is absolutely staggering, at $10 million in today’s market. But the question on everyone’s lips is: what will they do with all that money?

Some of the rare gold coins were estimated to be worth $1 Million on their own! That is a sum of money most can only dream of, but the extremely lucky and elated couple have decided to do the noble thing and pay off their outstanding bills, and then donate the rest of the valuable coins to various charities within their community.