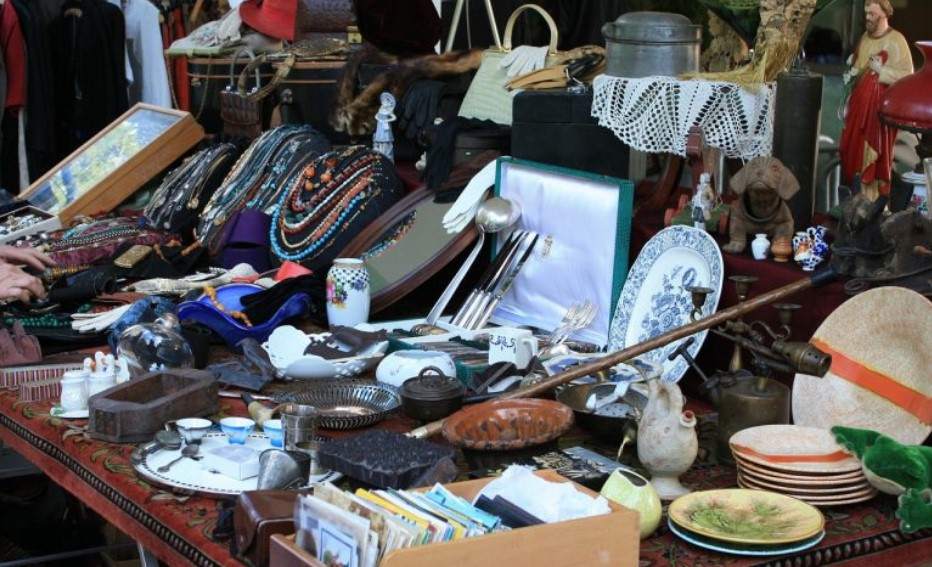 Sifting through a myriad of random articles placed haphazardly upon a display table was the only way to find any sort of meaningful discovery. He rifled through and touched every piece on the display table to see what might be hidden beneath. He glanced towards a picture frame tucked under some brick a brack and felt the hair on the back of his neck rise.

Somewhat Of An Expert

Michael Sparks was no novice when it came to finding great buys in thrift stores, in fact, he frequented small and big stores around the country and had found an assortment of goodies that he began collecting, some were useful items around the house and some just for their beauty. He bought the frame and awful picture for $4, he thought it would look great in his living room, but it was not to be.

Upon arriving back home he unloaded the few items he had purchased at various different stalls and brought them inside to have a better look at them. He was disappointed that the frame was not the beautiful old wood he had thought it was, but just a plastic frame made to look like old wood. He was about to toss it when he had another idea.

The frame may not have been worthy of hanging in his home but he was never quite sure about art. The picture in the frame was a dreary and dark depiction of a country scene, not his taste at all–but who knew what it may be worth if he could find out if it was an original painting from an obscure artist.

He began to carefully prise the backing off the frame, no longer worried about damaging the frame of course, but just in case the painting was something after all. He lifted the heavy card holder off and stared in disbelief at what lay beneath it. He wasn’t expecting anything else to be hidden inside, but there was a piece of old, heavy paper folded neatly inside.

The paper was folded with its contents hidden and he tentatively reached in to remove it from its protective casing. It felt heavy in his hands, heavier that paper made these days, that was his first clue, he just didn’t know it yet. He carefully began unfolding the parchment to reveal what was hidden inside.

As he straightened out the last neat fold creasing the paper he got a look at some very beautiful script. It couldn’t be mistaken for anything other than The Declaration of Independence. Mike was baffled as to why anyone would store a print of The Declaration of Independence behind a dreary painting, so he switched on another light and sat down to take a better look.

All Men Are Created Equal

Michael, as many people in America do, already owned a print of the famous document and it has well-known statements on human rights that many people hold dear, particularly its second sentence:‘We hold these truths to be self-evident, that all men are created equal, that they are endowed by their Creator with certain unalienable Rights, that among these are Life, Liberty and the pursuit of Happiness.’ But this copy was so much more beautiful.

The Most Beautiful He Had Ever Seen

After looking at his purchase for a few days, he thought the print might actually be a little older than he originally thought. “I’ve seen Declarations of Independence in thrift stores before,” said Sparks. “This one was so beautiful I thought it was an engraving. I look for things that have quality to them.” What he did next would change his life forever.

And Perhaps Older Too

The suspicion that the document was older than he first assumed led him to start researching about it on the internet. What he learned blew his mind. He was holding in his hand one of only 200 original authentic copies of the document. What was even more astounding was that there are only 36 copies known to be in existence today. The needed to get this appraised. Right now!

His head was spinning and he was thankful that he was already sitting down or he was sure he would have fallen right over from shock when the Raynor’s Historical Collectible Auction in North Carolina told him what it was worth. A whopping $250,000. To anyone that is a life-changing amount of money. He couldn’t even begin to think of what to do next, but that would all fall into place quite neatly.

He was soon in touch with Raynor’s Historical Collectible Auction, a prestigious auctioneer that promised to start the bidding for the historic piece at the evaluated price of $250,000, but nobody foresaw the incredible developments that were about to take place when the auction began.

There were some very serious bidders, each wanting the piece of living history to be added to their companies. The auctioneer began by opening the item or bidding, describing it in its full glory: ‘This is a copy that John Quincy Adams commissioned William Stone to make in 1820’ he began. He didn’t get much further before a bid for the full amount was made, followed by another, much higher amount, and another, and then another.

And It’s Sold To…

Michael sold the artifact through Raynor’s Historical Collectible Auction for $477,650 to Bray-Conn. The price was more than he or anyone else involved could have imagined. “I was delighted,” said Raynor. “I assumed it would sell for $300,000 to an institution. We broke a world record.” Michael was beside himself, his head reeling.

“They removed the document from a canvas carrier, remoisturized it and removed the varnish from the face,” said Bob Raynor, president of the historical collectible auction. “Because of the varnishing, the ink remained dark.” And because of the dark ink, this copy is one of the best preserved of its kind, Bray-Conn, the Utah investment firm that purchased the declaration, went on to say.

A Not So Hard Limit

“At first we set a limit of $350,000,” said Corey Ann Curwick, the marketing director for Bray-Conn. “We wanted it bad enough that we were going to keep bidding until we outbid them.” But why exactly would an investment firm of all places want a copy of the Declaration of Independence, and pay almost half a million dollars for it?

It’s All About The Symbolism

“It’s symbolism for how we operate our company,” said Curwick. “The principles that have brought our country success have also given us unparalleled success.” The plan is to educate children in the area on the founding fathers. A staff member and former teacher will coordinate field trips with different schools so children can see what founded the land of the free.

The declaration is one of two copies found west of the Mississippi, with Bray-Conn being the only U.S. company to own one. Most of the other copies belong to private collectors and to the government. And after the daze of suddenly having so much money wore off, just what exactly did Michael do with his fortune?