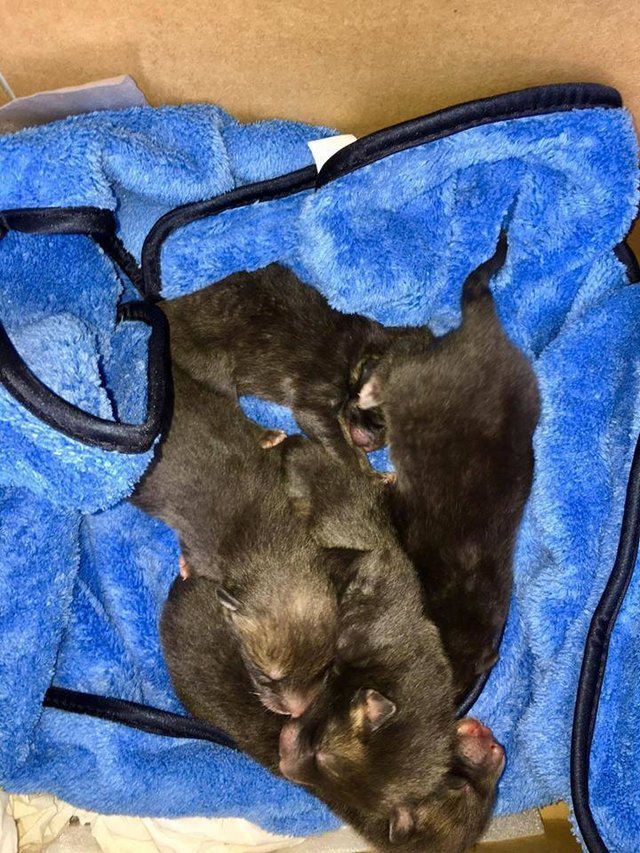 He was cleaning up the neighborhood in a group effort to rid the mess that had accumulated around the community when he finds little black puppies–cold and abandoned in a pile of rubbish. With no other choice, he rushed them to the nearest vet in the area to try to save five tiny little bundles of life before it was too late.

Craig McGettrick was happy to be part of a neighborhood clean-up in his area. The vicinity had become a dumping ground and would only get worse if something wasn’t done about the growing problem soon. It was also just plain gross to look at every day and he was eager to have a beautiful area outside his home again.

Armed To The Teeth

Everybody spread out, armed with gloves, bags, shovels and the motivation to really get stuck into the task at hand. No one expected to stumble upon five tiny lives stashed inside a mattress that had been heaped atop a pile of rubbish, bordering the woods. But that is exactly what Craig found.

In a pile of discarded rubbish, Craig continued the difficult task of bagging what he could and transporting the bigger items to cars nearby for removal. This pile contained an old mattress that began moving and squeaking when Craig pulled it towards himself. He stopped what he was doing and immediately began searching for the source of the noise. He wasn’t expecting to find five tiny black puppies.

There were two things running through Craig’s mind as the spied the tiny pups with their eyes still shut. One was that people had abandoned the puppies knowing that during the cleanup effort happening today someone would find them and give them the proper care. The other was that a stray mother dog had abandoned them in the heap and moved on. Either way, he was left with no choice.

He called to his friend Beccie and together they rushed to find a cardboard box to house the pups on the way to the vet. They lined it with anything soft they could find and found a hot water bottle to add to the makeshift den to keep the babies from catching a chill during transportation. When they got to the vet things started to get a bit weird.

The vet was part of an animal rescue center and the pups would be cared for until they were able to find new homes for them. They needed to be fed every few hours with a bottle and puppy replacement milk for them to grow up strong and healthy. Puppies with their eyes still closed are way too young to survive on their own. They would need a miracle to pull through.

Craig and Beccie handed the impossibly cute pups over to the capable people at the Liverpool animal center. But just before they did that they snapped some photos to remember them by. They wanted to post these pics on social media and see if they could get a lead as to who dumped them there. Or was there more to this story?

Other than a cruel-hearted human owner that threw a litter of unwanted puppies into a rubbish heap there may be another theory. It crossed Craig’s mind. Perhaps, and it was unlikely in this neighborhood, but just perhaps a stray mother dog had given birth in that mattress. What they found out on Facebook wasn’t what they expected. Instead of offers of good homes for the pups, people started saying some pretty strange things.

A Keen Eye For Details

When a keen-eyed Facebook user had seen the photos of the adorable puppies on Facebook, she took a double-take. She didn’t want to cause a stir if she wasn’t right, so she carefully checked her information. What immediately stood out were the little creature’s snouts. But there was another telltale sign that these weren’t puppies at all!

An Explosion Of Activity

Suddenly, Craig’s Facebook post exploded with people starting to speculate as to what the “puppies” could be. Hundreds of posts came through in minutes, flooding the post with speculation and doubt. Anything and everything seemed to be fair game in the contest of ‘what baby is it?’ Some of the suggestions will astonish you.

Everyone Has An Opinion

The general public seemed to think they were not pups at all, in fact, one commenter was completely sure they were something else entirely. There were specific details that lead people to believe that puppies they were not. For one was the long noses in the particular picture, sure it could be that some dogs have long noses, almost like baby raccoons, but there were other strange things too.

Any And Every Kind Of Animal

Another Facebook user noticed that the tails were unlike any puppy he had ever seen, they were very long–almost half the length of the pups’ little bodies. To him, he was sure that the puppies were, in fact, some type of wild rodent. I mean if you look at rats when they are born they have incredibly long tails. Of course, he had no means to judge size from a photo so it was completely possible. Still, something wasn’t adding up here.

Posting the pictures online seemed to be getting them nowhere, everything was speculation and guesswork. Their initial reason for posting online was simply to see if they could find where the ‘puppies’ came from and in the best case scenario, to see if they could secure wonderful fur-ever homes for the abandoned fur-babies. But one comment took them by surprise.

Running Out Of Time

The information they received in a direct message was something that sent shock waves through them. It came directly from a welfare authority, so they knew the information was founded on truth and knowledge. One thing was for certain now, they had to get those ‘puppies’ back from the animal rescue center and take them straight back to where they were found right away. Time may have already been running out.

Not Dogs At All

Founder of The National Fox Welfare Authority, Martin Hemmington, contacted Beccie via Facebook and told her that the pups they had mistaken for dogs were in fact not dogs at all, they were very young foxes. Obviously, no one was going to claim fox babies so the only option was to put them back where they were found and hope mom came back to feed them. There was one problem though.

The Home Was Gone

The rubbish pile containing mom fox’s den for her cubs had already been removed as the clean up continued and there was no way to put them where they had once been. The experts would need to be called in. Once again they were put in contact with The National Fox Welfare Authority who were happy to help.

Paul McDonald, a local rescuer with Freshfields Animal Rescue was called in by Hemmington to assist with the release of the cubs. He had some surprising advice about baby foxes. “Fox cubs don’t initially look like foxes when they are cubs, so it’s common for people to mistake them for dog puppies,” Paul McDonald, also known as The Fox Man, explained. “They are brown in color as opposed to the red, ginger color of adults.”

And he explained how it was that they got to be found all alone under a mattress too, “Vixens leave their cubs all the time whilst they are in the den, and as they get older they’ll begin to explore their surroundings more and more, and become less dependent on mum as they get older,” McDonald said. Because the pups were newborns they would have to find their mother. That was the number one priority.

Even if it meant not feeding them! It had been a busy day for the five tiny canines and by now they were surely very hungry. There was no puppy milk to feed them and in this instance, it wasn’t actually a bad thing because McDonald had a clever trick up his sleeve to reunite the mother with babies again.

“I didn’t give the cubs any milk in order for them to be hungry so they’d cry out and call for their mum, which they did,” McDonald said. “I put them around the same place they were found, as I knew the mum would be looking for them, and she’d be checking the place she last had them.” It would be a tense waiting game, watching to see if mom would return.

It was 4 o’clock when McDonald finally got to the kit’s den site. The mattress may have been gone but mom would have a backup den nearby. So he gently put the cardboard box on the ground and left them just like that with only a hot water bottle to keep them warm while everyone waited.

A long hour took forever to passbefore they finally caught glimpse of a slinky mother fox coming to investigate the box on the ground. She just couldn’t stay away from the cries of her hungry babies calling for her. She checked inside and then firmly gripped one cub by its neck and took it away with her, but she didn’t come back…

For another few hours McDonald waited patiently, he knew exactly what had happened. “I believe once she’d picked the first one up and knew the others were safe in the box, she waited until it got dark to get the rest as she must not have felt safe moving the cubs in daylight,” McDonald said. Sure enough, as the sun lost its hold on the world she returned for another and then another until they were all back where they belonged.

By 7 o’clock, the vixen had taken every single one of her babies. “Paul texted me a photo of the empty box,” Hemmington wrote on Facebook. “All through this, I was letting Beccie and Craig know and everyone was so pleased that the cubs were back where they belonged … with mum!” McDonald, too, couldn’t be happier with the resolution…

“It made me feel ecstatic that the cubs went back to their mum, as it would have been a tragedy not only for the cubs not being brought up by their own mother but for the mother to lose her cubs,” McDonald said. “This is without a doubt the best kind of rescue in my line of work when nature is allowed to take its own course.”