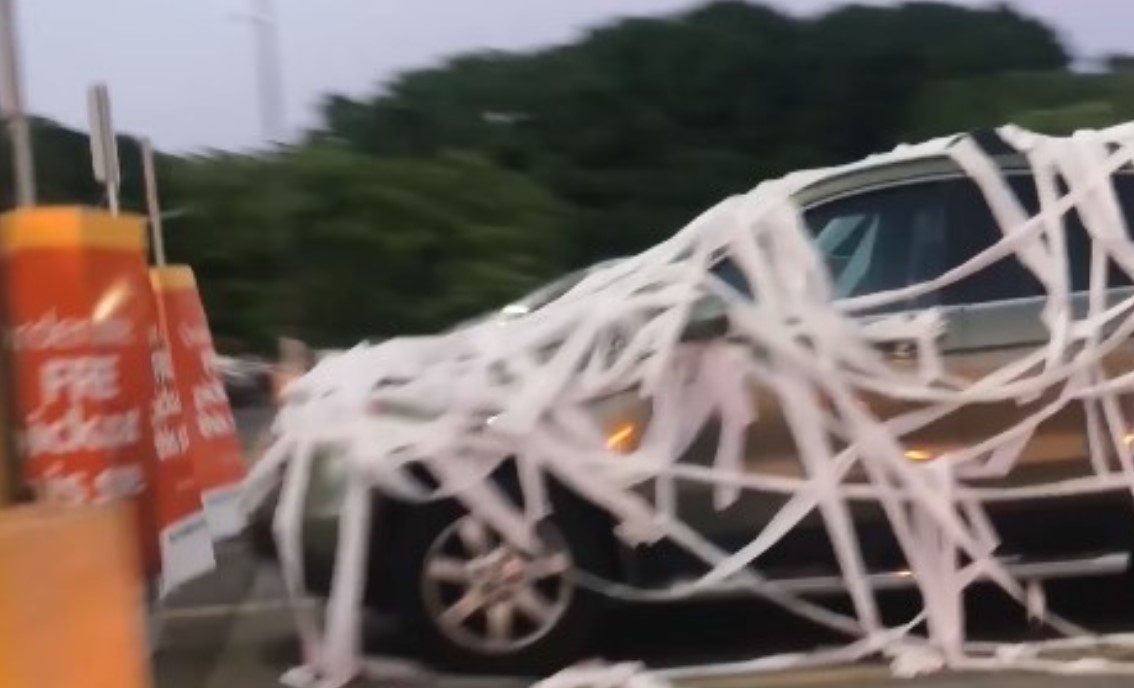 He looked at the driver of the shiny SUV and paid him no mind. After all, he had been here first, patiently waiting for the parking spot he had his eye on to become vacant. Suddenly, the SUV raced in front of him, cutting him off. Incredulous, he watched the rude man quickly slip into the spot he had been waiting for. But the rude driver had underestimated him. Today, this parking spot thief was going to pay.

Internet prankster Lil Skitzz and his buddy just happened to be recording one day when the parking space thief struck. Needless to say, Lil skitzz was far from amused. The parking space was in a prime position in the overcrowded parking lot, near the entrance. And now, because of one rude driver, he would have to carry his groceries the distance. What could be more annoying?

If you have ever been a victim of a rude and inconsiderate driver brazenly disregarding all unspoken parking lot etiquette, you will know all too well the frustration Lil Skitzz was feeling when he saw the man nip into the parking space that he had been patiently waiting for. And then the rude man proceeded to cheekily add insult to injury.

Without a hint of regret or conscience, the man gets out his car and swaggers over to the grocery store. Lil Skitzz rolls down his window and informs him of what he’s done, but the man has some nerve.”Your name is not on the spot!” he yells and proceeds to unleash a torrent of insults–as if he’s the one who has been wronged!

Lil Skitzz listened to the man, incredulous, and he started to see red. Then he checked himself, and a quiet calm washed over him. As the saying goes, sometimes it’s better not to get mad. Sometimes It is far better to get even. His mind raced as he thought about all the things he would like to do to teach this man a lesson. And the answer was right there, in the grocery store.

Lil Skitzz knew that exacting revenge on the man was petty, but he just couldn’t resist. There was a perfect way to teach the parking spot thief the error of his ways. It would take some effort, but he knew it would all be worth it. Most importantly, the punishment had to fit the crime.

Lil Skitzz chuckled gleefully as he entered the Walmart and made a beeline for the toiletry aisle. He wouldn’t need much to set his diabolical plan in motion, just an ordinary, everyday item. He loaded up his cart and proceeded to the checkout line, imagining the infuriated driver’s face all the while.

With toilet paper in hand and his friend recording the prank in all its satisfying glory, Lil Skitzz got to work. The parking lot thief needed to be taken down a peg, and Lil Skitzz was just the man for the job. Onlookers passed by with confused looks, but when he explained the owner of the car’s lack of manners, he had their full support.

It look some time, but the level of detail was important for this prank. The rude driver needed to feel it where it would hurt. In a twist of irony, he would be delayed from leaving the parking lot, just as Lil Skitzz was. For society to run smoothly, people need to be considerate of others. A seemingly small injustice can really ruin someone’s day. And when the inconsiderate driver saw what Lil Skitzz had done, his reaction was priceless.

After the work was complete, Lil Skitzz stood back to admire his masterpiece. Then, he hid nearby to catch the man’s reaction–which didn’t disappoint. He strolled casually over to his ill-gotten parking spot with groceries dangling from each arm. He looked up and a look of puzzlement crossed his face while he comprehended exactly what he was seeing. The bags of groceries fell to the floor, and he stood in dazed disbelief.

The entire car was covered with toilet paper. Rolls upon rolls wrapped around every surface, from the side mirrors to the wheels. The car stood hidden, and not a speck of paint, chrome, or glass was left visible. The parking lot thief would have to spend a lot of time untangling this colossal mess.

Getting The Point Across

While the prank may have been juvenile and petty, it proved to be highly effective. Lil Skitzz weighed his options carefully before exacting his revenge. He had limited resources, and he had to solve the problem without violence–or damage to property, for that matter. So he decided to resort to an old classic.

He posted the immensely satisfying video on Twitter and it exploded. The video received over 100,000 shares and comments. Most commenters were supportive and could relate to the annoying event of having a parking space stolen, and they watched Lil Skitzz exact his revenge with unbridled glee. But, as expected, not all comments were completely positive.

One commenter wrote: “You wasted money & time to vandalize someone’s vehicle because they parked in “your spot” in a public parking lot…. ok,” while others questioned the authenticity of the video: “The only thing worse than someone stealing your spot is someone posting a fake video claiming it’s real. Guaranteed that dude is a friend of yours. The acting was horrible, just the worst. What some people will do to try to go viral. Boggles the mind.”

Staged or not, the prank did get some good laughs…most surprisingly from people passing Lil Skitzz as he carried out his diabolical payback. And honestly, who hasn’t fantasized about dishing out a dose of instant karma to an inconsiderate and entitled driver? Even better, as the man comes out of the Walmart to find that his car has been skillfully TP’d, dropping his groceries isn’t the only reaction he had.

Taking In The Scene

The parking lot thief inspects his car from a distance and then places his hands on his hips–the universal posture that tells us he is ready for a confrontation. Then, he slowly paces around the vehicle, as if to see how best to unravel the offending toilet paper from his car. Lil Skitzz giggles quietly off-camera. But Lil Skitzz is not satisfied with just watching from a distance.

The Cherry On Top

Lil Skitzz and his friend then drive up to the scene of the petty crime and shout one last taunt from the open window. “Thanks for the free content!” Lil Skitzz yells triumphantly, and then the burly parking space thief, realizing who had pranked him, starts to run at the car like an angry bull.

The moral of this somewhat petty yet oddly satisfying video is that you should always be considerate of others. Other than for the obvious reasons of showing your fellow humans consideration and kindness, you never know when you will annoy the wrong person–and in this case–a person willing to go to great lengths to ensure that you are left looking like a fool for everyone to see.

Lil Skitzz has enjoyed notoriety for his viral revenge video, but some netizens have left him with some warnings: “Just about right… Just… Next time don’t put your face on camera… He’s gonna find you…” one concerned fan wrote. And with the video becoming so popular, Lil Skitzz may have reason to be worried.

Other video pranks by Lil Skitzz weren’t exacted for such noble reasons, though. They show that perhaps he is not always looking out for the community’s best interests. However, these prank videos do not boast such a large following. What people want is a vigilante to bring inconsiderate people to (petty) justice–and what’s more satisfying than seeing a rude person getting their just desserts?
Must Read
Genome Studies Manage To Find A New Branch Of Fungal Evolution
European Space Agency Budget Increases By 10 Billion For The Next 3 Years
Artemis 1 Finally Launches: What It Means For Space Travel And Exploration