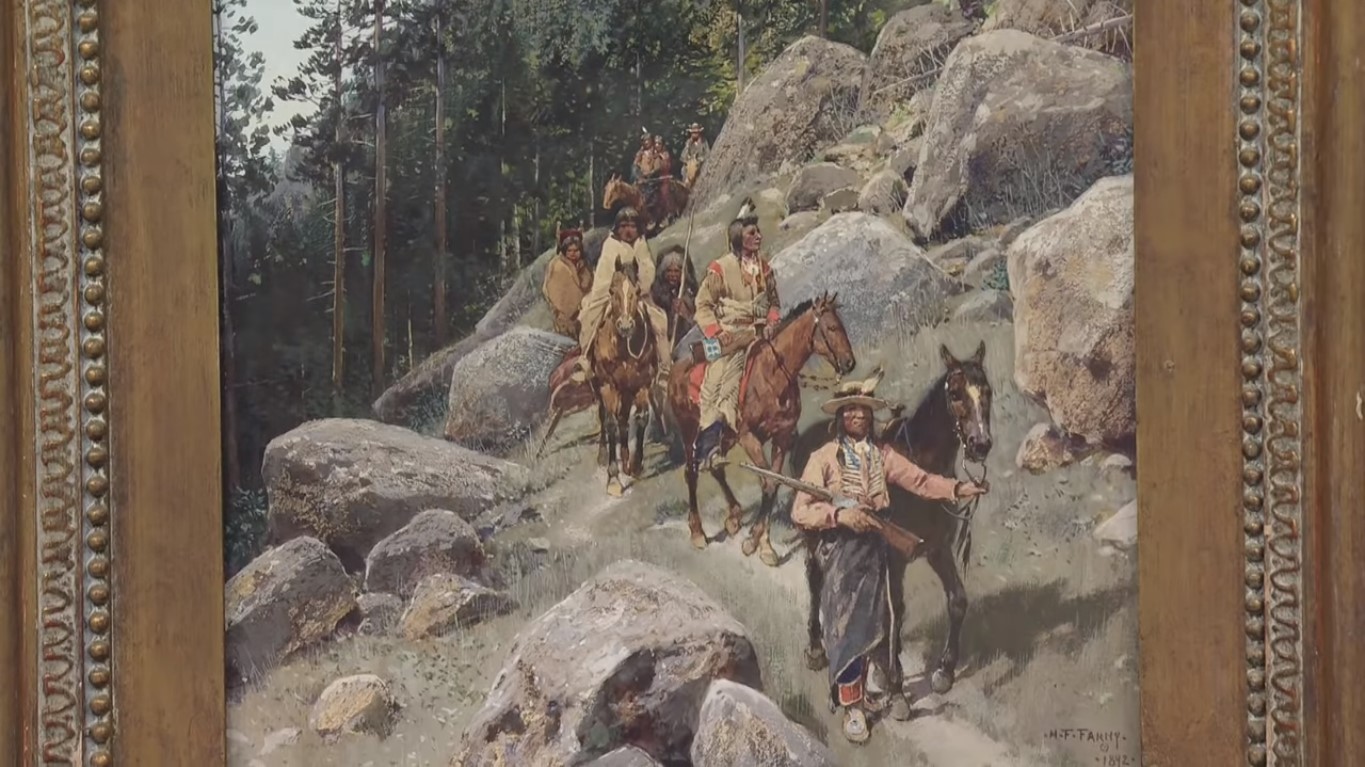 She stared at the appraiser and the world stopped. She was completely gobsmacked. Every emotion played out across her face, from tears to disbelief, and the world seemed to stand still as she took in the information. The appraiser waited silently for her to recover before telling her even more about her sentimental portrait. It was a day she will never forget.

Pennsylvania Farm Show Complex & Expo Center was hosting the well known and popular television show ‘Antiques Roadshow’ and a crowd of over 5000 hopeful people had gathered outside, ‘valuables’ in tow, to see if they were sitting on a gold mine or hoarding junk. It was there that she waiting amongst other hopefuls for her chance to see a master appraiser.

The painting was priceless to her and had been in her family for generations, but it was here that she would discover if it had any monetary value or if it would just be a pretty picture that hung in her house, ready to be passed along to the next son or daughter to remember their family before them. She wasn’t sure she wanted to know any more than that though.

The picture had hung above her grandmother’s bed for the longest time, she had loved it for its beautiful depictions and wanted to keep the painting close and safe. No one ever really knew what it was worth or whether it was an original piece or just a print. Rose had actually only suspected it may be real when something strange happened.

After her dear granny passed away the beautiful piece of artwork was handed down to Rose. She felt honored to have been bestowed such a gorgeous piece that her granny had loved so dearly and she felt it brought them closer together when they were so awfully far apart. Looking closely at the frame she noticed something hidden inside it.

A small smudge seemed to be blighting the gorgeous artwork so she took it outside to the front garden to get some better light on the blemish and that’s when she saw it. A small black bug had somehow gotten underneath the plate of glass in the frame and was lying directly on top of the canvas. She carefully opened the back of the frame up and removed the glass, exposing the painting to the bright sunshine and summer’s air.

Rose looked closely at the bug, which turned out to be the most annoying of bugs, the mosquito. She carefully plucked the dried insect between her thumb and finger, barely grazing the painted surface, when she felt her heart start beating double-time. She threw the bug into the flowers and rushed to put the glass back over the artwork. She said later, “I took it out to the front yard and I opened it up to get the mosquito out so I could take it with me to college, and then it kind of scared me a little. I closed it back up immediately because it looked like it might be real.” But she wouldn’t know for sure until much. much later.

Now if you ask anyone what the worst and most annoyingly terrible insect there is, you are going to have a lot of answers slating the mosquito. And really they are awful, good-for-nothing bugs that at best keep us awake with their droning high pitched hum or at worst carry life-threatening diseases, but perhaps this bug was the push Rose needed to find out the truth. But what was the truth exactly?

After waiting around for most of the day to be seen by somebody Rose was asked to sit her painting upon an evaluation table and take a seat. She held her breath as she carefully put down her granny’s painting and sat ever so carefully next to the table. She could feel butterflies in her stomach as Meredith Hilferty, master appraiser, sat down across from her. It was now or never.

The interview begins with Meredith asking Rose exactly what she knows about this piece, and unlike other visitors here she seems to have a pretty outstanding knowledge on the artist. She began relaying what she thought she knew: “I know he was born in France and then he moved to northern Pennsylvania,” She said.

Rose was talking about famous artist Henry Francois Farny, and his interactions with Native American tribes were legendary. It was said that he learned the lore of the forest from the Seneca tribe who came from their nearby reservation in New York state to hunt in the area where he spent his childhood. But, if the painting was authentic, how had Rose’s grandmother come to have it?

Rose continued, “…so he could have been in the area at the time when he was painting it when it was given to my grandmother. And then he moved out to Ohio. But he had associations with the Sioux tribe and they actually adopted him in and they gave him a cipher, ‘LongBoots’, and that’s what that little circle under his signature is.”

Meredith confirmed that she was indeed right about some of the artist’s history, and conceded that, given Rose’s grandmother’s whereabouts, it was possible that it was authentic. But she had one more question for Rose that left everyone who heard it reeling. “Have you had it appraised before? Do you know if she had it appraised?” Rose thought about it carefully, and when she spoke, her answer was scandalous.

“It was appraised as part of a general house appraisal twice. In 1998 it was appraised as a print at $200 and in 2004 for at $250,” Rose told her. You could almost see Meredith’s eyes widen in disbelief, and then her smile comes through in her voice as she tries to hide what she already knows.

Meredith holds back a smile as she looks from the painting and back at Rose, and without missing a beat or changing her tone she offers her professional evaluation of the exquisite artwork. Her delivery makes the value even more shocking, and Rose’s face starts to flush in disbelief and a tear starts to roll down her cheek.

“So, if we were going to put this in an auction today, I would suggest an estimate of $200,000 – $300,000,” Meredith says matter-of-factly. Rose is stunned as she tries to comprehend what she’s just been told. It was a monumental moment. When Rose finally regains some composure and finally speaks, her reaction is priceless.

Meredith stays very quiet and the camera focuses on every emotion flashing over Rose’s face, first disbelief followed by a quirky giggle, then a hundred untold emotions, until eventually, tears are forming in the young woman’s eyes. Then she asked an innocent question that revealed exactly how much her grandmother’s heirloom meant to her.

When rose spoke again her throat gets all choked up with emotion, “So I can’t hang it then?” She asked the startled curator, as it finally hits home and she understands that granny’s picture is worth too much to actually have hanging behind her bed as a mere decoration. Then Meredith filled her in on more fascinating details about the valuable painting.

The entrancing artwork depicts a group of Sioux riding on horseback around the bend of a rocky mountain trail and is right in the middle of the artists most prolific time. “1890 is when we start to see some of his very best paintings. He represented the Native Americans in a very peaceful, tranquil way,” Meredith explained.

“You can see that in this painting, he didn’t really ever bring conflict into his work as some of the other artists of that time did, Charles Russell and Remington kind of would show the conflict with the Indians, he really just wanted to show the Native Americans in their natural environment–without too many other things happening besides the landscape around them.”

“Her dad, I’m guessing, would’ve given it to her after she spent the summer at a dude ranch when she was 19, in, like, the ’40s,” Rose confirmed tearfully. And the internet is going crazy over her reaction to finding out that a cherished and sentimental piece that was passed down by her grandmother is worth a small fortune.

“What a horrible dilemma. Something so cherished, so beautiful and important to the memory of your family. A historical relic from an American master. But on the other hand, a MASSIVE pile of cash that could change your world. A new home, or college or relief from grinding debt. Such a heavy choice and no wrong answer, but really no right one either,” one commenter wrote.

With over 464,818 people having watched her find out the value of her treasured heirloom on YouTube, people only have nice things to say about her honesty and depth of character, “It was interesting that her first reaction was an expression of loss despite the value she learned the painting has. She said, “So, I can’t put it up?” and shed tears.

An insightful commenter continued,”…Meaning, the painting reminds her of her grandmother and because of the high value of the object she can’t risk it being stolen. She must place it where it will be safe from thieves but away from her eyes. She can’t see it every day and think of her dear grandma. Very sweet reaction.” But some other comments weren’t so positive.

Some expressed outrage that the first two valuations were so desperately far from the truth, one commenter wrote: “What kind of appraiser just assumes it’s a print?﻿”, with other people insinuating that it could have been a scam or, less worryingly, an honest mistake by a ‘Jack of all trades’ evaluator doing a routine broad item house evaluation. But we will never know now and funnily Rose was only worried about one thing when she learned the value of the masterpiece.

Should I Have Left It?

“Should I have left the mosquito in the back?” she asked Meredith in an anxious voice, worrying more that she might have done harm to the picture by exposing it to the elements. And Meredith consoles her by replying, “It’s actually not a bad idea that you took the bug out.” And then she went on to explain why.

“Ultimately we would like for a conservator to do that but the bug could have continued to decay and caused a stain, but no. It’s good that the bug wasn’t there anymore,” she continued gently. The relief is evident on Rose’s worried face upon hearing that she did the right thing by trusting her instincts.

So removing the bug was a good idea. At the end of the day, it could have caused a stain that a conservator could have worked on but removing the mosquito had a two-fold effect. For one, it preserved the painting for possible damage, but that wasn’t the most important part the pesky mosquito played.

The small, seemingly insignificant insect played a larger role. It pointed Rose to believe that there was something special about this piece. Without it, she never would have inspected the painting or have even decided to go and get it appraised. But now she is left with a daunting choice, as some commenters were quick to point out.

If you had to choose between keeping the sentimental picture for your beloved granny or give it up for a better future–perhaps to pay off a house or college debt– or would you keep it and hang it up on the wall behind your college bed like Rose had once thought she would do? Either way, she never knew she was actually sitting on a fortune, which is why her reaction is priceless.
Must Read
Genome Studies Manage To Find A New Branch Of Fungal Evolution
European Space Agency Budget Increases By 10 Billion For The Next 3 Years
Artemis 1 Finally Launches: What It Means For Space Travel And Exploration