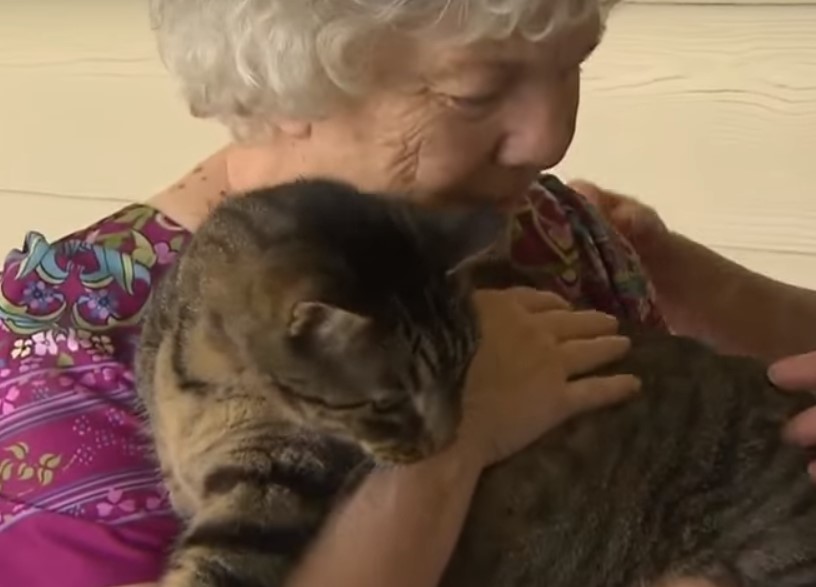 “Bandit!” she called, but as soon as she had opened the door, he raced off in front of her into the darkness. But she could hear his persistent cries, growing fainter and fainter. She hurried after him, and then she saw it. Stricken, she frantically dialed 911, and only hoped it wasn’t too late.

Fran Swayze lives with her cat and constant companion, Bandit. The pair live in Cleburne, Texas, at the Buena Vista Seniors Community. Fran hadn’t always had her beloved cat by her side, but on one fateful night, she was very grateful that she did. You see, Bandit was an unusually perceptive cat, as Fran will soon find out.

Bandit, a beautiful tabby tomcat, had lived out his first year in a no-kill shelter after being found as a stray. Fran, looking for a companion, laid eyes on him and instantly knew he was the one. She filled out the requisite adoption papers and took him home that very day. Fran had no idea that Bandit would go on to repay her in the most astonishing way.

Call Of The Wild

Bandit is an energetic cat, and Fran soon realized that confining him to her small home would prove difficult. He wanted to roam free–as cats do. His feline instincts called him nightly, urging him to take in the sights and smells of the neighborhood. But Fran, aware of the dangers, was having none of it, so the pair came to a compromise.

Every evening, Fran would take accompany Bandit on a walk around the complex to sate his curiosity. Once they were done, he was again confined to the house. This arrangement suited Bandit just fine, and he seemed content to curl up on the bed after his nightly chaperoned walk. That is, until one eventful evening.

Fran’s daughter was paying her a visit, and they were sitting and chatting in the lounge. Suddenly, Bandit got up from his usual sleeping place and started to behave rather oddly. He paced in front of the door, mewling incessantly. Fran thought this was strange as he had already taken his daily walk, so she paid him no mind. But his howls became too loud to ignore.

Fran walked up to the door where Bandit was putting on a loud performance and firmly told him “No.” It was already 9 ‘o clock, and she wasn’t about to take a walk in the cold on her cat’s whim. Bandit sat on the floor expectantly, looked straight into her eyes, and let out another loud “meow”. Little did Fran know, there was a tragedy unfolding a few feet from her door.

“Alright, alright,” Fran sighed, relenting. She opened the front door and Bandit shot out, a blur of grey and white, into the hallway. He ran to the other side of the building and she struggled to keep up. The cat was behaving very strangely indeed, but in a few minutes, Fran would understand why.

“Bandit?” Fran called. A thin tendril of worry crept into her as she worried that he had bolted. He had never acted this way before, and she had to catch him. She walked over to the other side of the hallway and spotted him, a faint outline with his head sticking through the railings as he gazed downward, into the garden. What was he looking at?

When Fran caught up to him he was absolutely still, peering into the darkness. She squinted to try to see what he was looking at, and then she saw it. She could just make out a heap of clothing on the grass, and then she realized that there was something…no, someone…lying in the garden.

Fran shouted for her daughter, and they both hurried down the stairs to investigate. The heap on the ground was an elderly woman, lying where she had fallen in the garden on the ground floor. Fran recognized her as her neighbor, but what had happened to her? The woman’s dachshund nosed at her lifeless body and whimpered.

Mary Baker had been out on a walk around the garden while she waited for her dog, Sugar, to do his business. She suffered from diabetes and her blood sugar levels had fallen dangerously low, but there had been nobody there to help. By the time she realized what was happening, it was too late.

Mary lost consciousness and fell to the ground. Thankfully, she came to, but she was too weak to move. “When I came to, I could see my little dog in the grass right there coming to me,” she said. “The next thing I know [Bandit, Swayze and Gravelle] are there and I’m saying ‘Help me, help me!’ and my dog didn’t fuss at the cat, and the cat didn’t fuss at the dog.”

Fran and her daughter had called an ambulance as soon as they realized that Mary was in danger, however the shaken woman declined emergency treatment. Fran and her daughter helped her up, and they walked her to Fran’s home where she sipped a glass of orange juice and recovered from her ordeal.

Luckily, Mary had sustained no injuries during her fall. Bandit the cat had come to her aid just in time. “How he could hear her, I don’t know,” Fran said during an interview with CBS. But everyone, especially Mary, is extremely grateful that he did! “God works in mysterious ways,” she told the Cleburne Times-Review. But saving Mary’s life wasn’t all he did that day.

Since the incident, Mary and Fran have become fast friends. “I’m blessed that I have good friends,” Mary said tearfully, “…they are my extended family.” And Mary needs the companionship more than ever. Since her fall she has made the difficult decision of rehoming Sugar, as she realizes that she is unable to care for him properly. But what about Bandit?

“We may have to call him Sir Bandit,” Fran said jokingly, then she added, “…but I don’t want to give him a big head.” And Bandit has become an internet sensation, with fans all over the world. Everyone is touched by his story, and some people have even given the cat the title of “Man’s Best Friend”.

“Dogs seem to get all the credit,” Fran commented. When we think of cats, we tend to imagine them as independent and less concerned about the livelihood of their owners, but Bandit’s heroic deed proves that this isn’t always the case. Bandit has remained humble after becoming a celebrity, but people are calling him “The Hero of Buena Vista”.

People just can’t get enough of the surprising hero cat. One commenter wrote: “Not a cat lover but this one is a hero, ladies I hope you live a very long and happy life and remain friends forever, xx to Bandit xx”, and another: “I’m a big dog person, but Sir Bandit is a very special cat I must say!”

Thanks to Bandit, Mary is unharmed after her harrowing ordeal. If it weren’t for him, who knows what could have happened. And best of all, Fran and Mary have found each other. The two new friends visit each other every day, and Mary is eternally grateful to the cat. And rest assured, Bandit is receiving all the royal treatment he deserves!
Must Read
Genome Studies Manage To Find A New Branch Of Fungal Evolution
European Space Agency Budget Increases By 10 Billion For The Next 3 Years
Artemis 1 Finally Launches: What It Means For Space Travel And Exploration