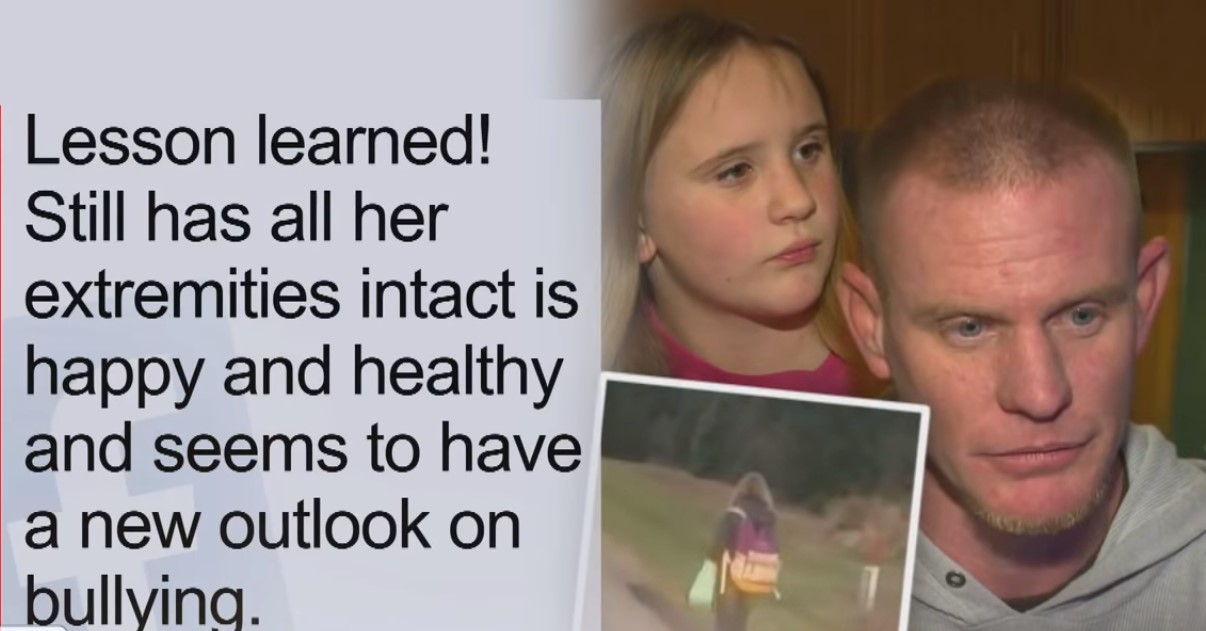 This wasn’t the first time she had been kicked off the school bus but it was her first time being suspended from riding it to school again. But she wasn’t concerned, the family had a car and she came home to tell her dad, “Daddy, You’re gonna have to take me to school next week.” She wasn’t expecting what happened next.

This was the second time that Kirsten, a 10-year-old Ohio girl had been sent off the bus for bullying a classmate and her father Matt Cox was not having any of it. “Let me make this extremely clear, bullying is unacceptable, especially in my household,” Matt says, and he had a plan to make sure Kirsten knew he meant it.

Matt says he believes that children have too much entitlement, that things are given to them whether they have earned it or not. Being kicked off the bus for bad behavior does not make you entitled to a private car drive down to school every day. You are capable of walking and walking is what you will be doing.

Now some might say that a three day suspension from school rides was punishment enough, but really there is no difference between a car drive or a bus ride, except that the car is probably more comfortable and relaxed, so Matt took his daughter back down a time in history when all children used to walk to school.

When I Was Your Age

I’m pretty sure everyone has a parent or grandparent who has started a story with the phrase, “When I was your age… We walked 10 miles in the snow with no shoes.” or, “When I was your age if we talked back to our parents we got our mouth washed out with soap.” They are used typically by older adults to convey how conditions have changed over an extended period of time to younger people. But the truth is that virtually no one used to drive to school.

Cool Off In The Cold

So in the 36 degrees cold weather, Kirsten trudged to school, all 5 miles… Albeit, Matt split the walk up over the three days of the suspension, so Kirsten actually only walked 1.5 miles for three consecutive mornings, giving her more than enough time to think about the consequences of her actions. Bullying, after all, hurts others.

Matt wasn’t about to let his ‘beautiful girl’ get hurt or compromise her safety either, he drove steadily behind her all the way. A free ride to school every day was something she took for granted. Matt relates his views on parenting, “Parents need to hold their kids accountable, so that was me showing how I am holding my kid accountable.”

A Right Not A Priviledge

The interesting part is that for some reason Matt recorded his daughter walking to school while trailing her in his car all the while giving commentary on everything from why she was getting punished, what he expected her to learn from the punishment and even saying “I know a lot of you parents are not going to agree with this and that’s all right,” he then did something unprecedented.

Matt uploaded the video to his personal Facebook account expecting only those on his friend’s list to see it, one of those friends asked him to make it shareable so that he could share it and the rest is history. 350,000 shares later and Matt had to make his profile completely private to stop the sheer amount of messages.

Matt wasn’t expecting the backlash on social media as his video and story went viral, chalking up over 15 million views and over 100,000 comments. He states in an interview that he only expected for his friends on Facebook to see it but, the next morning he woke up to hundreds of messages in his inbox. The messages are mixed.

While some parents are supportive, others are outraged by what they’re calling “too much.” On Monday, Cox made his daughter walk to school and posted a video on Facebook saying, “Life Lessons.” In the video, Cox said a lot of children today feel that the things their parents do for them are a right and not a privilege.

The Reason Why She Walked

Matt said his daughter was upset when she first started walking on Monday. During the walk, he talked to his daughter about how her actions were the reason she was walking. He said by the end of the walk she calmed down and realized that if she hadn’t bullied others she would still be on the bus. This was the second time daughter Kirsten had gotten in trouble for teasing other kids.

Despite the backlash, however, Cox stood by the punishment, “I am doing what I think is right to teach my daughter a lesson to stop her from bullying. Parents need to hold their kids accountable. I’m not going to be another parent that’s just going to brush things under the rug,” he explained. “I just want the kids to know that words truly do hurt. They cut very deep and have lasting effects.”

Not The Only One

And Matt isn’t the only dad to have dished out this kind of punishment. Another child, a 10-year-old boy from Virginia was also made to jog to school for a week by his dad Bryan Thornhill. The school was a mile away and his son was also been banned from the school bus for bullying. He named the video “You better listen to your dad, 2018,” and has even more views, shares, and comments than Matt’s has.

Stuck To His Guns

He too is sticking to his guns about his method of punishment and you can watch the video of the boy keeping a steady 6 miles an hour with his dad driving behind him. The video happens to be in the drizzle, but they were intending on driving him that day until he was rude to his mother in the morning, it was then decided that he would run to school even in that morning’s rain. The matter was even discussed on a talk show.

Two Sideds To A Coin

While most of the comments are in support of children learning that bullying is not an option there are more than a few that condemn the punishment altogether. Lee J Wilkens says “Love it!! I plan on showing this to my oldest child to show her that I am not a mean parent but that misbehaving won’t be tolerated. I’m not doing my job if I just let it slide.”, While Ariana Jade commented “makes sense why his kid is a bully… who knows maybe it will work for this kid but it wouldn’t for many that I have worked with. In fact, it could make him act out more.”

But despite supporters of both sides, it seems that the punishment has seemed to work, even if just for the moment. In fact here is what both parents have said about their kids, from Lee, “This right here is just simple. Ironically, since he’s been running to school this week his behavior has been better, his teachers have approved of his behavior this week, he hasn’t gotten in trouble, whereas last week he was just absolutely out of his mind,” and from Matt…

Matt updated the Facebook post, writing, “Life lessons!!!!” “UPDATE: lesson learned! Still has all her extremities intact is happy and healthy and seems to have a new outlook on bullying as well as a new appreciation for some of the simple things in life she used to take for granted.”

Matt even used the comments, both positive and negative to educate his kids on the effects bullying has, “”She, along with my other two children, seem to show a great deal of empathy towards some of the sad stories that I read with them,” “I also hope that parents see the video and start holding their kids accountable for their actions and stop sweeping their child’s actions under the rug with the ideology that kids will be kids. We as parents need to stop the bullying on the home front because bullying only breeds bullying,” Matt said.
Must Read
Genome Studies Manage To Find A New Branch Of Fungal Evolution
European Space Agency Budget Increases By 10 Billion For The Next 3 Years
Artemis 1 Finally Launches: What It Means For Space Travel And Exploration