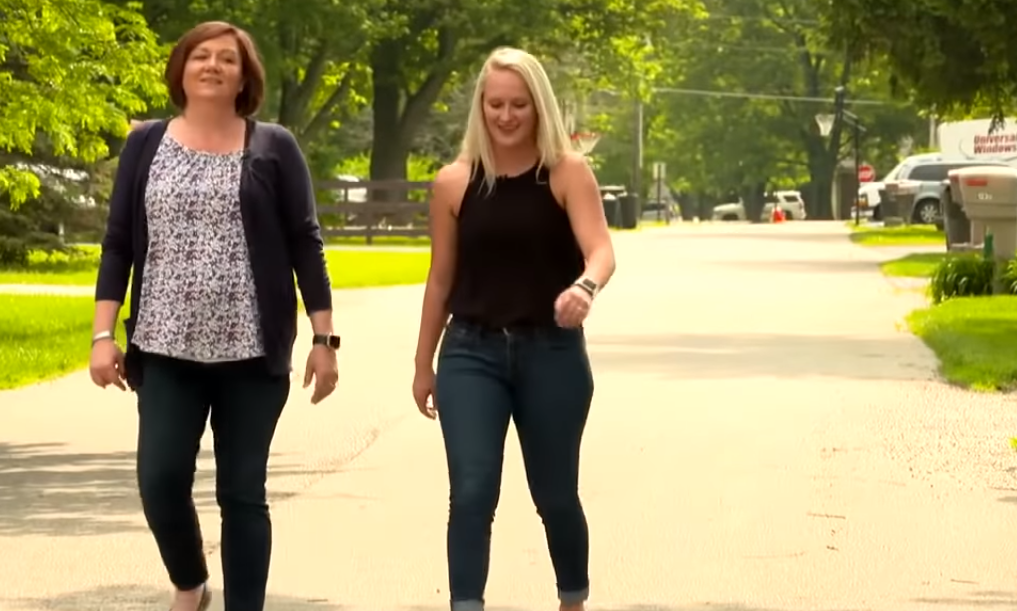 Kathi was sick and tired of being sick and tired. Doctors turned her away, her relationship with her daughter was suffering, and she was miserable. Eventually, she accepted her fate. If no one could help her, she would help herself. But she never expected this.

When Kathi heard the doorbell ring, She dragged herself upright, hunched over, and coughed heavily. Reaching for her walking stick, she pulled herself up from the couch. As she shuffled to the door, her cane scraped and tapped against the wooden floor. The contractors had arrived. When they made their way upstairs to finish the job, she retired back to the couch – her usual spot. She closed her eyes, hoping that a nap would alleviate some of her aches. Then, she heard them scream her name.

Kathi Wilson was an ordinary 41-year-old who lived in Shelbyville, Indiana. She had worked hard to support her family. She was no CrossFit enthusiast, but she lived a moderately active life. Ten years ago, she fell ill unexpectedly, and she had convinced herself that she was just run down from stress and work. But her daughter was worried, and she had every right to be.

Visit To The Doctor

Kathi gulped down a cocktail of vitamins and over-the-counter medicines in an attempt to recuperate. She took Vitamin E, Vitamin C, Vitamin B, Zinc, Iron— but none of it seemed to help. After a few weeks her daughter, Ashely, forced her to go and see a doctor. But the doctor just confirmed what she already knew, and she was given a sick note to take a few days off from work to rest. But Kathi’s illness was unshakeable.

Kathi was pale and had random bouts of exhaustion. Her appetite vanished, and her health continued to decline. Ashley was growing increasingly worried. Weeks after her first visit, she dragged Kathi back to the doctor. They were surprised that a strong, young woman with a healthy immune system like Kathi, who should have overcome the flu weeks ago, was still deteriorating. Now, they were growing concerned, too.

Dr. Mary Beth Hensley, beginning to take Kathi seriously, ran blood and allergy tests in hopes of picking up any disease or intolerance. All the tests confirmed that Kathi was a healthy woman. They didn’t have a diagnosis, but they decided to try an “elimination” approach, so Kathi was put on several different antibiotics. Dr. Hensley had hoped that Kathi’s reaction to the medications would give her an insight into her ailment, but instead, the opposite happened.

Kathi started to feel worse instead of better. She had body aches and could barely keep her eyes open. Then the mystery illness started to take a toll on her mental health. Her friends and family members started to worry. Maybe the illness was all in her head? But no, Kathi knew her body and she knew something wasn’t right. Ashely witnessed her mother’s deterioration first-hand, and she also knew in her heart that something just wasn’t right.

Kathi, determined to get to the bottom of her illness, searched for her symptoms online. She spoke to “experts” in online chats, and she tried herbal treatments and natural remedies, but nothing seemed to be helping. As time went by, more and more people lost faith in her, and no one could give her answers. She had never felt so alone before. Maybe it really was just all in her head?

Kathi visited her doctor regularly over the next 10 years. Dr. Hensley provided Kathi with the best care and tested for everything that she could. She went to great lengths to attempt to diagnose Kathi. She insisted on “cardiac testing, chest x-rays, MRI’s [of] the brain, the spine, to see if something was related.” But nothing seemed out of the ordinary. “I felt we were very thorough but didn’t come up with a solution,” Dr. Hensley explained. But Kathi was growing sick and tired.

Years of the mystery illness had affected Kathi’s mental health. It impacted on her relationships, work, and most importantly, her quality of life. After ten years of her flu-like symptoms, she decided that if no one could help her, she would help herself. So she decided to treat herself to a bathroom makeover. She had plans to create a sanctuary by remodeling the entire bathroom. She arranged contractors to take care of the job. But shortly after, they made a shocking discovery.

The contractor’s forehead crumpled with concern when he asked Kathi when her water heater had been installed. Kathi knew that it had been installed years before she had gotten sick, and Ashley must have been a little girl at the time. She thought hard and replied: “Maybe 10 years ago?” The contractors were horrified. They had discovered that the furnace and water heater, fitted incorrectly, were causing trace amounts of carbon monoxide to escape and leak into the house over an extended period of time. But isn’t carbon monoxide poisonous?

Carbon monoxide is colorless and odorless –invisible to the eye. This makes the gas a silent killer. When the body is exposed to it, the gas displaces oxygen in the blood, and this causes serious damage to the heart, brain, and vital organs. Even a small exposure to CO can cause chest pains, fatigue, nausea, headaches, and vertigo. But prolonged exposure can have serious effects, including vomiting, muscle weakness, fainting, and confusion. Some cases of CO poisoning even result in death. But how had she been misdiagnosed again and again?

After years of searching for answers from specialists and healthcare professionals, Kathi had lost hope. But now, Kathi’s decade-long symptoms suddenly all made sense! The most unexpected visitors had finally giver her an answer. “I was shocked,” she exclaimed. Kathi had been suffering for so long from an unexplained illness, and it had left her in the physical condition of an old woman. But how could she ever thank them enough?

“Over the years it kept getting worse and worse,” Ashley explained. When she heard that finally there was proof of her mother’s ailment, she was overjoyed. Now, Kathi would be able to function like a normal human being again. After years of her mother being bed-bound, they would now be able to do all the things that they had missed out on — like going shopping or going out for dinner. But could she ever forgive the doctors after all the years of neglect?

Kathi hasn’t felt this good in years. She got so much more than just a new bathroom from the contractors — she got her life back. She’s thrilled to have her body, mind, and spirit healed. “I feel great,” she said. “I haven’t been this happy in I can’t tell how long.” Kathi is well on her way to recovery after all the years of being exposed to poison, But there is still an element of concern to this story.

Kathi wishes that she had pushed harder for a diagnosis. She had been called crazy, delusional and a hypochondriac for a decade because the tests were negative. She was prescribed the usual bed rest, exercise, or pills, but nothing helped. No one could give her the answers. But Kathi was right to trust her instincts. Even though she had to wait for 10 years for an answer, she is grateful. Kathi looks forward to her new-found energy and her new life, and she hopes that her story will raise awareness about the dangers of carbon monoxide.
Must Read
Genome Studies Manage To Find A New Branch Of Fungal Evolution
European Space Agency Budget Increases By 10 Billion For The Next 3 Years
Artemis 1 Finally Launches: What It Means For Space Travel And Exploration