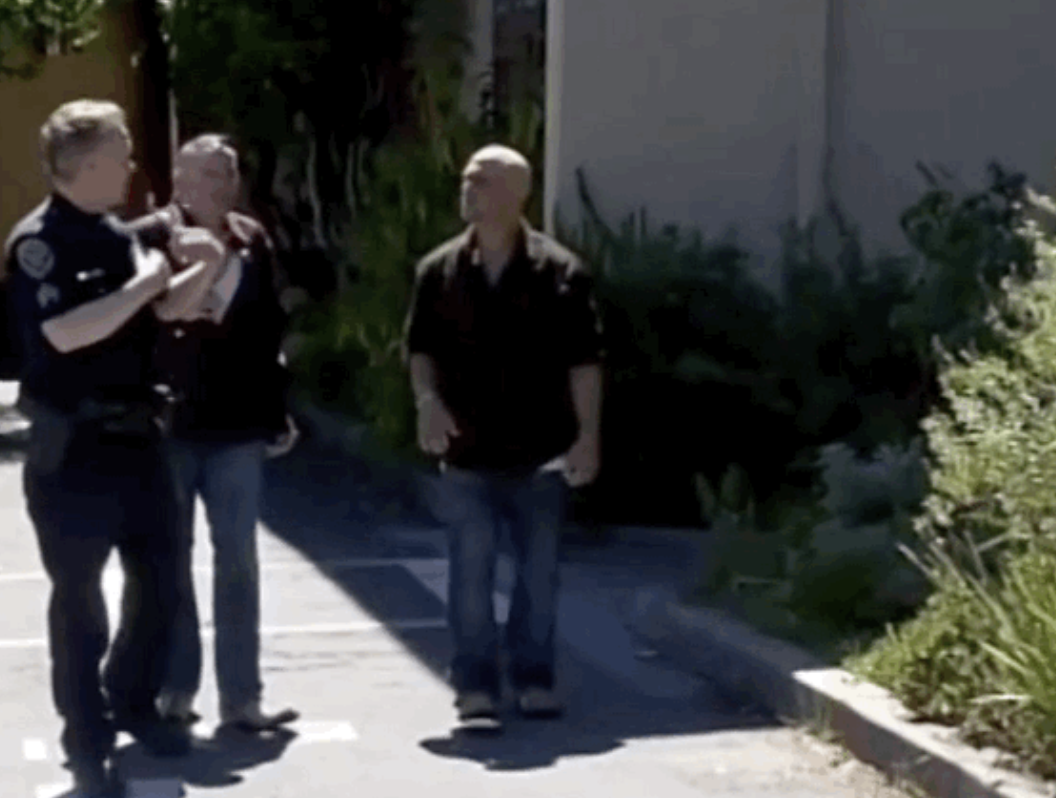 A San Francisco police officer noticed someone acting strangely. The officer quickly went up to the woman but in an instant was struggling for air in a fight against an agitated woman. She immediately needed help, as the other woman kept fighting her. The police officer pleaded for help, but a crowd of onlooking bystanders did nothing until one passerby saw the commotion and quickly ran towards the action. No one would have expected this stranger to possess some incredible skills that saved the cop that day.

One evening, at approximately 7:00 pm, a female officer was patrolling the well-known streets of San Francisco’s south side. She was on Mission street when she got a call from dispatch. There was an altercation going on, but little did she know it would almost cost her her life.

“One of our officers responded to the report of a woman jumping up and down on cars, denting them, vandalizing them,” Police Sergeant Eli Turner later told ABC-7 News. The officer swiftly stepped up and headed to the disturbance all by herself​. She had no idea she would need backup.

The unnamed female officer arrived at the scene only to be surprised at what she saw. She knew her training well and thought she could control this situation all by herself. As she approached the agitated woman, using her de-escalation training, she tried to diffuse the situation. But as soon as she tried, the situation​ only grew tenser.

The police officer confronted the agitated woman and tried to calm her down. The woman causing the scene was much larger and much stronger than the officer, but still, it seemed to have worked, at least for the time being.

The disturbed woman seemed to be calm, so the cop placed her under arrest. She’d​ done severe damage and broken the law, so the police officer had to put in her in handcuffs, but as soon as the police officer tried the suspect was having none of it.

As the police officer approached her to put the handcuffs on, the woman grew unruly and furious. The unnamed police officer knew she needed to get this woman under control to prevent further damage, but then the situation became dangerously violent as the suspect reached for the officer’s gun.

The woman lunged at the officer, pinning her against a wall trying to get her gun and then ​slammed her head into it. The officer couldn’t get her balance as she had received a big blow to the head, still, she tried her best to control the situation even though it appeared that her fight training was failing her.

As the fight continued the officer kept calling out for help; “Help me! Help me!” she screamed. Clearly, she was outmatched—and in serious trouble. But a crowd had gathered to watch and no one was lifting a finger to help!

The officer continued to struggle to break free from the overpowering woman when a man is​ crossing a street nearby noticed the commotion. He did not think twice and wandered close to see what was going on. When he did, he could not believe no one was intervening, so he decided he would.

The mystery man saw how the suspect was slamming the officers head into the wall and had her in a chokehold. He couldn’t stand to watch any longer and had to do something. He had an extraordinary​ set of skills that he used to diffuse the situation.

“The person had the officer kind of in a chokehold,” the mystery man told ABC-7 News. He quickly intervened, wrestling the woman to the ground whilst breaking his headphones in the process. He held the woman down as they waited for more officers to arrive. But as soon as they did, the man left in a hurry, and no one even got his name.

The officers involved wanted to find him and show him their appreciation, but he had disappeared. Authorities couldn’t find the 35-year-old hero, so they embarked on a somewhat friendly manhunt. Four days later, they found him and learned​ the whole truth.

The mystery man, Ryan Raso, had a criminal history. He had lived in Florida where he had been in trouble with the law for some years, but he had had enough. He moved out to California to start a new life, ​but he had fallen again on hard times.

“He has been homeless,” Sergeant Eli Turner told ABC-7. “He’s had a rough time in recent months. We wanted to reach out to him and let him know he has friends.” So, why did he intervene to help out? And what were his incredible skills?

The more the police talked to Ryan, the more they understood why he did what he did. Ryan was baffled that day when no one was helping the unnamed female police officer; “A law enforcement officer is saying, ‘Help me, help me,’” he said later in disbelief. Why did no one else intervene? Thankfully, Ryan did!

Ryan had had a tough childhood, ​and by living through that, he learned how to defend himself. Still, he was an angry teenager and needed to control that somehow, so he signed up for martial arts classes — and he thrived.

Ryan knew exactly what to do when he saw the suspect holding down the police officer. His experience in the martial arts world had shown him how to approach the situation calmly and logically. He gripped hold of the agitated woman and performed a jiu-jitsu maneuver that had her on the floor in seconds. If it were not for his master skills, maybe he too would have been hurt.

The officers couldn’t help but become overwhelmed after hearing Ryan’s story. They could not believe someone who had had so many run-ins with the law would put themselves​ in danger for a police officer. The whole department wanted to do something nice for him.

“An officer was being beaten up, a human,” Ryan said. “So I just did what’s right, you know.” Still, the officers chipped in to buy him a new set of headphones and also offered to set him up in a shelter if he wanted to. The officers wanted to help him as much as he had helped them!​
Must Read
Three Indigenous Tribes In The United States Will Get $75 Million For Relocation Due To Climate Change
A New Supercomputer Simulation Animates An Incredibly Accurate Look At Universal Evolution
Genome Studies Manage To Find A New Branch Of Fungal Evolution