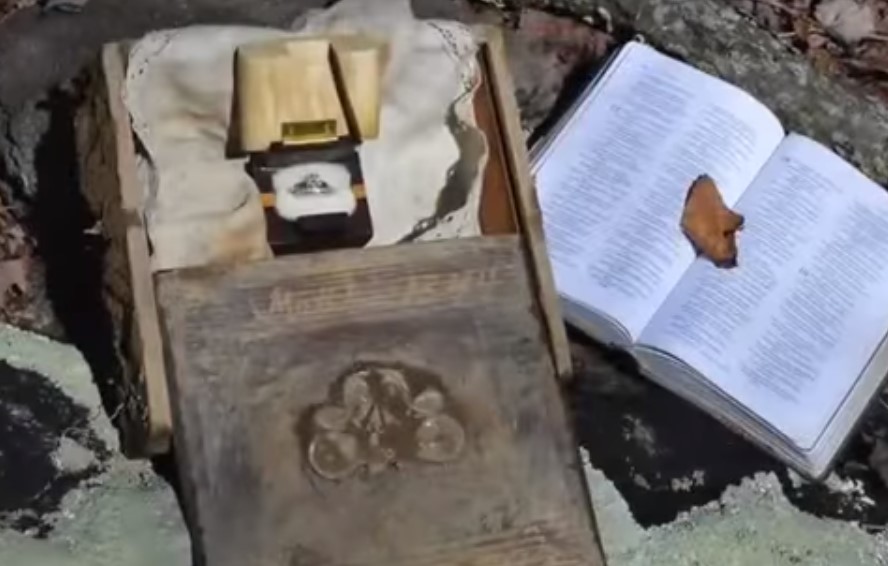 It had all been in good fun until she read the letters engraved on the box. At first, she couldn’t believe it… When he brushed off the caked dirt to reveal more letters, the realization hit her with such a force she threw her hands up to her face and collapsed to her knees.

Ryan Parsons, Pastor at New Life Community Church in Bunker Hill, West Virginia, had been eager to show his girlfriend Lisa the thrills of his favorite hobby. But in all her life, Lisa hadn’t expected to find such a hidden treasure when the metal detector made its warning sound, and how it would change her life forever.

It was a cold morning in April 2017, when the couple set out on their hunt for buried treasure. It was Lisa’s first metal detecting excursion, and Ryan couldn’t contain his excitement. The first time the metal detector alerted them to something, he scrabbled to uncover it.

Pulling his gloves on, Ryan started to carefully dig until he found something small and round underneath the soil. He lifted the coin out from the dirt and gently wiped away the damp earth from its surface. It was a coin from the 1800s! Lisa was overjoyed that they had found something. But what other forgotten treasure would the couple find?

The couple were pleased with their find and continued into the woods. Lisa swung the metal detector in a wide arc over the piles of decaying leaves until she was startled by another alert from the machine. This find was definitely bigger, and Lisa squealed with excitement. Ryan started to dig and asked Lisa to record the proceedings.

Then, Ryan made a discovery. There was a large rock blocking whatever had been buried deep in the ground, and as Ryan dug deeper around it, he exclaimed: “Someone buried this under this rock… We gotta document this.” Lisa made sure to keep the camera rolling as he dug deeper and deeper, but the mystery only grew.

Ryan was beside himself, exclaiming: “This could be the find of a lifetime!” Lisa was growing worried now, and whispered “Careful, babe,” from behind the camera. Who knows what they could be unearthing? Lisa wondered if there were any landmines in these woods and shuddered. Then, Ryan struck something solid, about a foot into the soil.

What Could It Be?

Lisa couldn’t believe their luck — first the old coin, and now this! She could start to make out the shape of the buried object and could see the edges sticking up from underneath the packed mud. The mysterious object was rectangular. Then Ryan carefully lifted it from its hiding place to reveal that it was a wooden box.

Wiping the mud from the box’s surface, Ryan started to see letters and numbers emerging from the dirt, but when he read them aloud, Lisa felt her heart skip a beat. But what could have been engraved on the box that would give Lisa such a sinking feeling of foreboding? – she would find out the box’s purpose soon enough.

The words began to emerge, one by one, as Ryan cleaned the box with Lisa’s glove. At first, she thought there were dates on the box, but then a chill shot up Lisa’s spine as she realized what they really were. On the old box were Bible verses! Ryan ran to his pack to fetch the Bible that he carried with him everywhere.

“Matthew 13:44,” Ryan read to the camera, “The kingdom of heaven is like treasure hidden in a field. When a man found it, he hid it again, and then in his joy went and sold all he had and bought that field.” Lisa was enthralled by the coincidence and was overwhelmed with questions. Then, Ryan read the next corresponding passage.

“Proverbs 18:22,” Ryan continued to read. “He who finds a wife finds what is good and receives favor from the Lord.” “Oh my gosh!” Lisa exclaimed. Shaking now, Ryan then slid the top of the wooden box open, slowly and carefully, to reveal more writing. But it was what was inside the box that took Lisa’s breath away.

Ryan read the names on the inside lid of the box, and they were their names. Ryan and Lisa. Lisa didn’t know what to think anymore — they had found this mysterious box buried deep in the ground, and it had their names written inside! But what could it all possibly mean?

Then, Ryan uncovered a smaller box within the larger one, wrapped in white cloth, and quickly opened it. Lisa took a deep breath. Inside was a beautiful heirloom engagement ring. Lisa tried to process what was happening, but then, without hesitation, Ryan says the four words Lisa never expected to hear. “Lisa, will you marry me?”

Ryan had come up with an elaborate ruse to surprise Lisa with a proposal, and she had been completely blindsided. He had gone out to the woods earlier that day to bury the antique box that he’d had specially engraved for the big day, and he had even had Lisa’s grandmother’s heirloom diamond ring reset in a custom-made band, just for Lisa.

Lisa gasped when Ryan asked her to marry him and exclaimed “Yes! Yes!” as she ran to his side. Ryan then took the camera from her and recorded the surprise and emotion on her face. Then he said to her: “Lisa, you’re the treasure that I found in a field, and I want to give over everything that I have so that I can have you.”

The elaborate setup and Lisa’s reaction to Ryan’s heartwarming proposal quickly made the video go viral, and it garnered over a million views. But the traction of the video didn’t stop there. It continues to receive views worldwide, even a year after it was uploaded to Youtube. The couple is thrilled.

“Overnight Lisa and my engagement video has caught the eye of the world,” Ryan said. “Lisa and I have been blown away by this sudden attention, but really blessed to know that our love story is encouraging so many people. ” Ryan has really set the bar for surprise proposals high, though!

Comments continue to flood in, with one reading: “One of the most beautiful proposals I have ever seen. I hope you have a long and loving life together,” and another said that it was the “coolest video ever” and that they could never have guessed that it would end in a surprise proposal!

Treasure Hunt With A Twist

Ryan’s proposal that was caught on video had been an inspiration to many and had a personal touch that was especially meaningful for himself and Lisa. His inclusion of an exciting treasure hunt, with the twist of Lisa being the hidden treasure, has captured the heart of millions. But what had Lisa initially thought as she read their own names written inside the box?
Must Read
Genome Studies Manage To Find A New Branch Of Fungal Evolution
European Space Agency Budget Increases By 10 Billion For The Next 3 Years
Artemis 1 Finally Launches: What It Means For Space Travel And Exploration