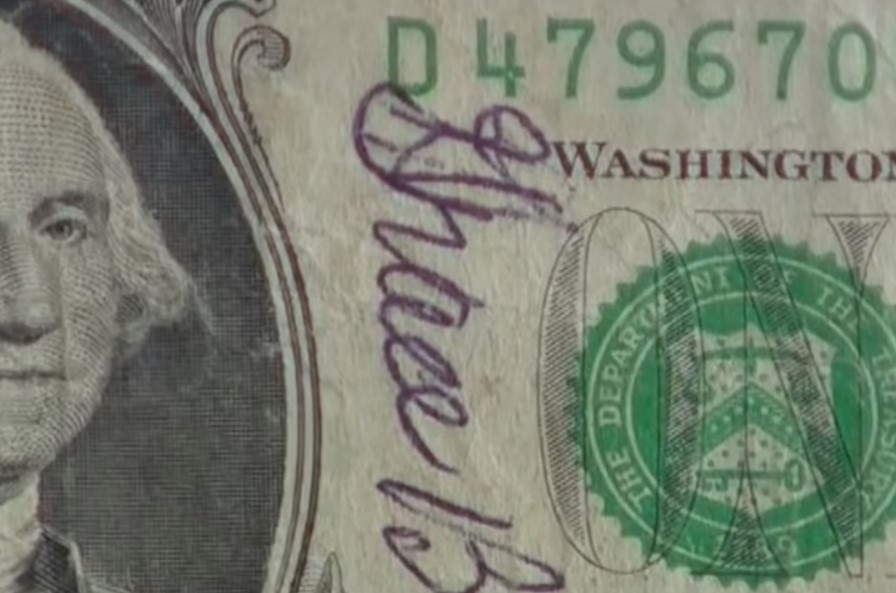 He glanced at the $1 bill before he stuffed it into his wallet, but then he caught a glimpse of blue. Impossible! With his hands trembling, he lifted the note to his nose and inspected it carefully. It couldn’t be… but it was. There, scrawled on the dollar note in blue ink, was a message from his wife from beyond the grave.

When Peter Bilello returned to his childhood home in Italy to visit his mother in 1964, he could never have guessed what fate had planned for him. His mother was overjoyed to see her son but soon began pressing him as to why he had not married. She even went as far as to suggest which girl he should marry — even though he hadn’t even met her yet!

Peter, who was 35 at the time, was having none of it and brushed his mother’s meddling off. But, luckily for Peter, she persisted. She told him that the girl she knew was perfect for him, and he reluctantly agreed to meet her. The two hit it off instantly, and just over a month later, 23-year old Grace Caruso was his wife.

Peter and Grace had a fairytale romance, and they moved to Connecticut to start a family that same year. The deep love they had for one another held fast, and Peter felt like he fell in love with Grace more every day. The couple was inseparable. “Wherever my wife would go, I go,” Peter recalled in an interview. Little did Peter know that her love would manifest itself even when she was gone.

Peter and Grace were blessed with two children, who in turn had two children of their own. “She was a very good wife, very good cook, very good mother,” Peter told ABC News. The pair remained deeply love as they weathered the years together, enjoying spending time with their grandchildren and with each other. But, unbeknown to them, tragedy was about to strike.

In 2001 Grace’s health started to deteriorate, so she paid a visit to their doctor, and the prognosis didn’t look good. Grace was diagnosed with cancer. Peter loyally stayed by her side throughout the surgeries, chemotherapy, and radiation treatment, always making sure that his beloved wife received all the loving care she needed. Then, they received some good news.

Grace’s cancer had gone into remission. Peter couldn’t have been more thrilled. “I thought it was going to be okay,” he tearfully recounted, years later. But unfortunately, Grace’s cancer returned three years after she was given the all-clear. Again, Peter stayed by her side while she underwent treatment, and did everything in his power to make sure she was comfortable.

“Me and my wife were together all the time,” he said in an interview with ABC News. “She goes to chemo, I sit down next to her. And coming home, she lay down on the couch, she’s very sick after the chemo and [I] do all the work in the house.” Grace fought bravely for years, and then one day, Peter had an idea.

Peter, wanting to express his devotion to Grace, decided to do something that would symbolize their marriage. So, he and Grace each signed a $1 bill, and he kept these in his wallet — intending for them to be there together forever as a testament to their undying love. But, this was not to be.

Just one year after he and Grace signed the $1 bills as a testament to their love, Peter accidentally spent them. He was devastated. He slowly resigned himself to the fact that he would never see the dollar bills again — he had lost them forever. But, little did Peter know that things sometimes have a strange way of working out.

5 years passed and the $1 notes were almost forgotten. Peter and Grace celebrated their 50th wedding anniversary together in June 2014. But Grace, as if holding on to see the momentous milestone, sadly passed just a few months later. Peter was heartbroken and alone. But, just 5 months later, Peter was about to receive a message from fate.

Peter was spending some time with his granddaughter, Ashley, when he impulsively decided to stop at the local Subway and treat her to lunch. He asked her to order their sandwiches at the counter and gave her $10 to pay for their meal. But when he received his change in $1 bills, he had no idea that he was about to witness something miraculous.

Ashley returned the change to her grandfather, but one particular bill caught his eye immediately. There, scrawled on the bill was a familiar signature — one he knew so well. He raised it to his eyes, and could hardly believe it. Grace’s autographed $1 bill had somehow returned to him — 5 years after he thought he had lost it forever!

There was the unmistakable name, Grace B. Peter couldn’t believe his luck. The odds of the $1 bill returning to him were staggering — it must have exchanged hands hundreds of times over the last 5 years, and now it was back where it belonged — in the hands of Peter. When Peter realized what he was looking at, he excitedly showed Ashley.

“We started to cry. We were so happy to get the dollar back. I never thought I’d get that dollar back,” Peter recounts. “It’s a miracle to get it back after five years,” he said. “Who knows how many million people got that dollar in their hands.” Ashley was confused, at first.

“I didn’t see it at first because I was just giving him back the change,” Ashley explained. “Then when he showed me, at first you didn’t believe it, but you still wanted to. But then when he got home, you can look at the signature to see how they matched up.” It was a miracle.

After Peter’s amazing moment, he couldn’t wait to go to the cemetery to share the news with his late wife. “I told my granddaughter, we’re going to go straight to the cemetery and tell Nonna, my wife, that we got the dollar back,” he said. “I showed the dollar to my wife and said, ‘Grace, look, I got your dollar back.’”

Peter now keeps the dollar bill somewhere safe, where he will never lose it again. “Nobody’s gonna get that dollar anymore,” he said. “No way.” Peter is convinced that it was Grace who sent the token of their love back to him from beyond, and he is now a firm believer of miracles.

People all over the world were awestruck by Peter’s story, and the local news stations have even featured it in the news. The return of his cherished token of love helped to ease the pain of his wife’s passing. Now, he is convinced that Grace had a way of somehow sending him a message from beyond the grave.

The odds of Peter ever finding the dollar bill that his wife had signed for him were one in a million — he had given up hope of ever seeing it again. He believes that the second note — the one he signed — will make its way back to him one day, too. Then, the pair of notes will be united once again. And who knows? The world certainly works in mysterious ways.
Must Read
Human Geneticists Finally Apologize For Horrific Past Experiments On Humans
The World Is Now 90 Seconds To Midnight
New Study Suggests Teacher Evaluations May Perpetuate Academia's Gender Biases