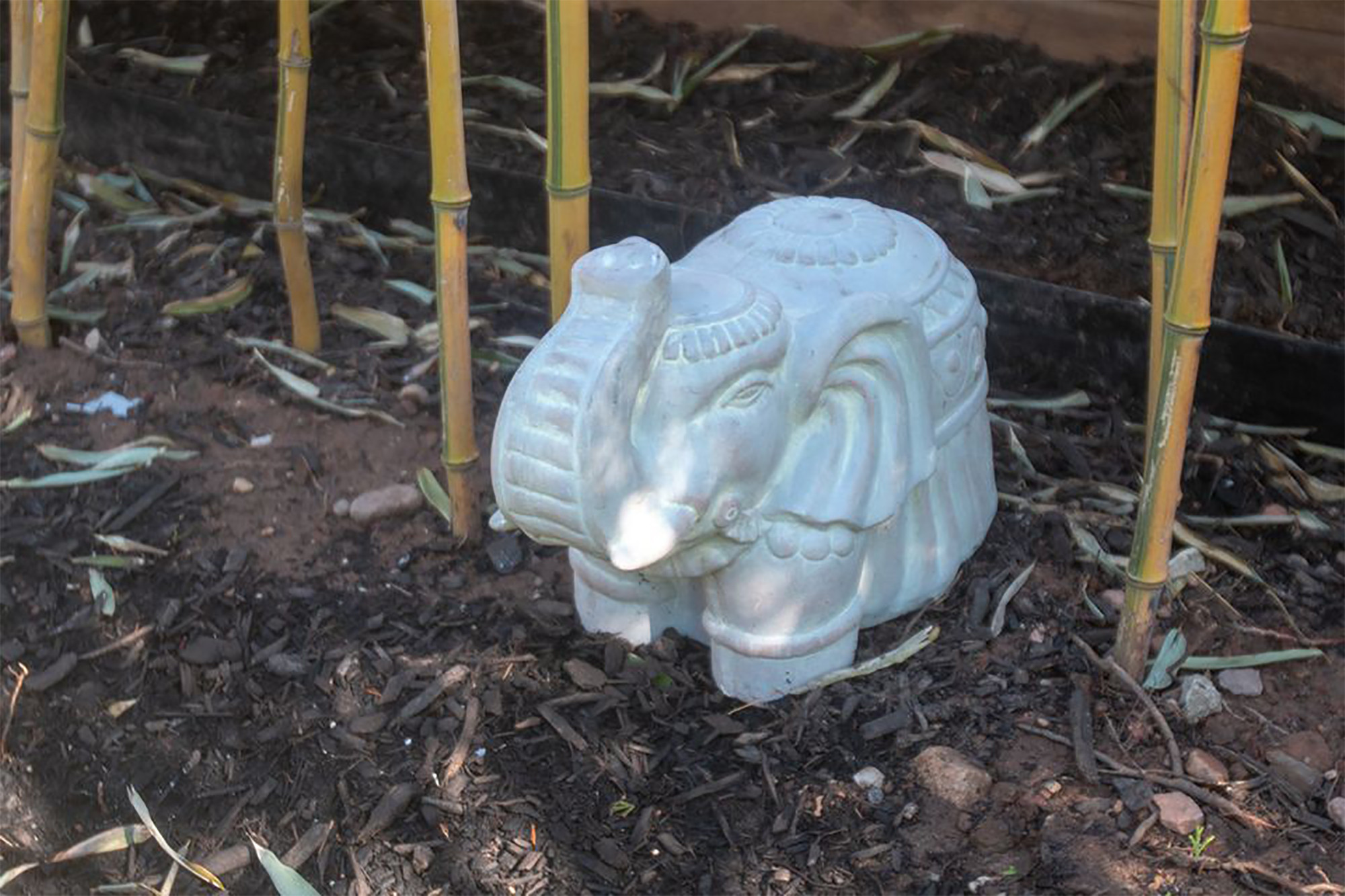 It was purely by chance, and a random act of nature that led him to investigate the box he always assumed was merely an electrical cabinet. But when he called a professional landscaper to help rebuild his patch of land, he could have never thought this little box contained so many secrets, but not just that, the neighborhood they had moved into also had an eerie mystery.

The Emanuel family had been living in Todt Hill​, Staten Island. Even though they had decorated and explored every inch of their lot, there was still one corner that was left untouched. The family had always thought it was an electrical cabinet where wires from electrical poles were stored. Little did they know the mystery this corner held, and the incredible backstory to it. Why had no one had told them about this neighborhood’s past?

In early 2018, the U.S East coast was visited by significant storms. But as the storms passed, the box was there, and this time it was more visible than ever before. What could possibly be in this box? Soon, the Emanuel family were about to find out and by doing so, they would uncover something that they could never hide again.

From 2005 to 2015, Todt Hill, Staten Island had a big problem on their hands. A burglar was terrorizing their neighborhood, ​and no one felt safe, but The Emanuels did not know about this, so they went ahead with their lives, living in peace and quiet. That is until they discovered the very thing that would unravel so many secrets.

One day, when the storms cleared, the family woke up to green pastures covering their yard and to one surprising thing in particular that had Matthew scrambling for his phone in high alert. Roaming deer had come by and munched up the plants that surrounded the unassuming box. By doing so, the box now was in complete view to the family. ​His next actions started a particular chain of events that he would never forget.​

He went ahead and searched for expert landscapers in the area. Robert Foley goes by the name of Bamboo Bob, he has decades of work experience and has seen some pretty bizarre things in his life. Still, Bamboo Bob had no idea this experience just might outrank all the other ones. But why?

Bamboo Bob went down to Staten Island to visit the Emanuel family’s property, it seemed like standard work – clean up debris, and plant more foliage. But then, something grabbed his attention. What he didn’t realize was that he had set in motion something that would have unbelievable results. Bob couldn’t resist and had to see if he could go ahead and unbox the mystery. Not only was he incredibly intrigued but the rusted box was getting in the way of the workers. There was no avoiding the secret any longer. They needed to pry open the box and all the mysteries it contained.

Not An Electrical Box

Bamboo Bob and his crew went ahead and excavated the box from the ground. It was then when the box was being pulled from the dirt that they knew the box was no electrical cabinet at all. The men turned the rusted box over to examine it thoroughly and saw what it actually was – a safe. But was inside it?

For so many years, the box which turned out to be a safe was abandoned above ground in the overgrown backyard of the Emanuel family home. The safe was roughly two feet across and one and a half feet in height. The safe weighed a hefty 100 pounds. And the contents inside…did not disappoint. One thing was for sure, this safe belonged to someone.

As the safe was pried open, both Matthew and Bob could not believe their eyes. This safe had incredible valuables inside and even though water had damaged most of the contents, files and documents were kept safe in a plastic bag. They soon would uncover a mystery that had been surrounding their community for years, but they did not know that yet.

The safe contained tons of stacks of hundred-dollar bills, each bundle about four inches thick! There was also a small transparent zipped bag containing much more. But still, as he saw the contents in the safe, chills went down his spine. Admittedly, this must belong to someone. But who?

Matthew and Bamboo Bob had stumbled across an absolute real-life treasure. The contents boggled their minds. Even though they had found an amazing once-in-a-lifetime find, the materials in the safe had suffered a lot of damage. Many of the dollar bills were wet and of no use. Still, the surprises surrounding this incredible discovery were far from over.

Chunks of gold, jade, earrings, jewels, and diamond rings were also hidden within the safe. All in all, the amount these two discovered in the safe was worth about $53,000 altogether. “We were freaked out,” Bamboo Bob told Staten Island Live. “It’s something you can’t make up.” But that wasn’t all. There was one more thing that would cause this incredible find to make headlines.

One Piece Of Paper

Inside the sealed plastic bag they found important documents. One of the documents was a receipt and value for a precious diamond ring. But as they kept searching the safe, the ring was nowhere to be found. They had found so many valuables but were missing the most important one. H​ad someone already opened the safe and only taken the ring? But why would they leave everything else behind?

While searching through the documents, they also found a manual to an expensive​ watch, and that too was nowhere to be seen. This could not be a coincidence – the most valuable items were not there. Someone had been in this safe, but who?

As they searched in awe, they found something that would solve everything. Within the contents of the plastic bag, there was also a note. When Matthew saw the letter, he couldn’t believe his eyes. Scribbled and handwritten, the note had an address on it, and he knew he had to get answers.

Naturally, he immediately had to find out where this address was, and to his incredible surprise, it was right in his neighborhood. Little did he know he was just about to get the cops involved and resolve something that had been buried​ for years.

Nervously, he knocked on the door. An elderly woman opened it, but still, Matthew had no idea what he was walking into. A potential crime maybe? Matthew went ahead and introduced himself, but instead of asking the woman if the contents were hers, he asked something else. “I have a strange question for you,” he said. “Have you ever been robbed?” The elderly woman looked at him puzzled and said something that set an investigation in motion.

The elderly woman and her husband had been robbed in 2011 by the so-called Ninja burglar. The burglar broke into her home after Christmas day when the couple was out of the house. But as soon as they returned home, they knew something was missing – their safe. Could this possibly be the missing link to the crime? The safe contained essential documents and of course incredible treasures that the elderly couple kept dear to their heart. They thought they would never see any of it again, but was stolen safe the same one that was in Emanuel’s yard?

Back in 2011, the neighborhood of Todt Hill was victim to the ruthless burglaries of “The Ninja.” He had gotten that nickname because of how stealthily he robbed houses and prowled the neighborhood as an unseen menace. For over 10 years, the thief had robbed over 200 homes across Connecticut, New Jersey, and New York. 160 of his targets had been right there in Todt Hill, Staten Island, and it said that he stole more than $4 million in cash and goods. The community was in turmoil, but then in 2015, they caught the “Ninja,” and the residents could breathe easier. Still, this elderly couple never knew that one day, their treasure might come back.

The Emanuel family invited the elderly couple to their home to investigate the contents in the safe. Never would they have expected such a rusty box to bring so much joy! As soon as the woman saw the jewelry, she began crying and shaking. She was overcome with such emotion that she had no words, she immediately hugged Matthew as she still couldn’t believe her prized possessions had been found. For so many years she had lived with the trauma of losing her valuables, and never imagined the day when they would return to her. The Emanuels returned all of its contents to them, but still, one more thing was left to really resolve the mystery.

The Cops Show Up

Matthew knew that this had been a criminal investigation, so they all came to the agreement that the police should get involved. Moments later, the police knocked on their door. To everyone surprise, the police officer who attended the call and house visit was the same cop who had investigated the burglaries so many years ago. The police knew the story all too well, and more so, they knew the elderly couple too. No one could believe how a poison ivy covered “electric cabinet” would come to resolve so many mysteries.

Still, there was one thing that did not make sense. The money had been recovered and some of the jewelry too, but what about the diamond ring and the expensive watch? As the Ninja Bandit was interrogated regarding the whereabouts of these two pieces, he quickly became nervous. He knew that now, he had to put more than himself in jeopardy.​

It turned out the Ninja Burglar was not working alone, and in his absence, while he was in jail, this person was still terrorizing communities. Police now knew that the thief had an accomplice and it did not take long for the Ninja to tell them who it was. This person too was detained and taken to jail and it all started with the Emanuel family renovating their backyard​.

You never really know what’s hiding on your land, but the Emanuel family brought a ton of happiness to an elderly couple who thought that they had lost their precious valuables so many years ago. “A couple of people asked us, ‘Why did you return it?’,” Matthew’s wife said. “It wasn’t even a question. It wasn’t ours.” But still, the family could not have believed their incredible luck. So, to treasure the memory, even more, they put a statue of an elephant for good luck right where the box was buried. “I guess the reward is karma,” he told CBS. “Good karma.“ But why would the “Ninja” leave the safe in the Emanuel family’s backyard?​
Must Read
European Space Agency Budget Increases By 10 Billion For The Next 3 Years
Artemis 1 Finally Launches: What It Means For Space Travel And Exploration
Clam Species Presumed Extinct For 40,000 Years Has Been Found Alive