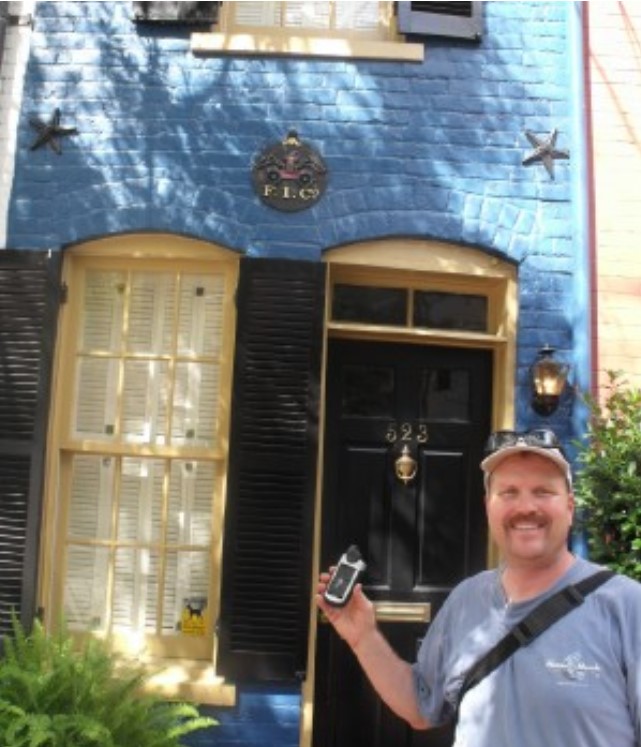 He entered the house and struggled to maintain his composure. He looked up in astonishment, as his eyes traveled up the walls and to the ceiling, from the hallway and up the stairs. To the carpets and balustrades, he took it all in. His head spun with the realization that somebody had done this — and all out of spite.

Jack Sammis had bought his beloved new home in Queens Street for a hefty $135,000 but was starting to regret his decision. He had bought the property on an impulsive whim, and now he was starting to think that it was unlivable. Jack was a lover of oddities, but perhaps he had finally taken his love of strange things too far. But when he finally let the cameras inside, the world went wild.

The house was extremely unusual, and it had been built with a very particular purpose in mind: revenge. The man who had built it made sure that he made life very difficult for one particular group of people in his neighborhood. Placement was very important to John Hollensbury, so much so that the house was so unpractical that livability seemed like an afterthought.

John Hollensbury had lived in the 1830s, and was a hardworking man. He loved nothing more than to arrive home from a long day of work, pour himself a stiff drink, and relax for the evening. But one thing stopped him from enjoying his peace and quiet, and soon, he was at his wits’ end.

Hollensbury was plagued by the noise of people loitering in the adjacent alleyway, and the sounds of broken bottles and late night brawls would float straight up into his upper-story window at night. More so, he was sick and tired of the loud clip-clop of the horse-drawn carriages as they clattered under his window. One day, he hatched a genius plan.

Hollensbury began to cackle wildly to himself. He knew just what he would do to stop the infernal noise and get even. But was it legal? He didn’t care about the logistics, he would do it anyway. He was going to stop the traffic if it was the last thing he ever did. They were all going to pay.

Hollensbury quickly put his plan in action and started to build. The alleyway was narrow, but he would make it work. No wagon would ever drive through here again, he thought gleefully. He hated traffic, and never wanted to hear it from his window ever again. Then, he ran into a complication.

The alleyway was public property, and Hollensbury was not permitted to build on it. But, he absolutely had to go through with his masterful plan for revenge. He used his position as a chairperson on the council board to get his way and pull off one of history’s biggest pranks — and leave his mark on the neighborhood forever.

200 years later, Jack Sammis saw the listing for John Hollensbury’s house and knew he had to buy it. He had passed the historic “Spite House” for years on his way to his office in Queen Street in the Old Town district in Alexandria. But he was never prepared for what he saw inside.

The House That Spite Built

John Hollensbury’s stunt to divert traffic was unprecedented. The house he built in the alleyway was only 7 feet wide and 25 feet deep — 325 square feet was spread over two stories. The house was built using the adjacent houses’ walls, and the gouges from the wheels of the carriages that Hollensbury hated so much can still be seen on the living room wall today. But could Sammis make the space livable?

Sammis had just bought the narrowest house in America. And he was determined to make it work for him. “I thought having something unique and historic would be fun,” he said. So, he enlisted the help of his friend Matt Hannan to make the best of every precious inch of space. And when it was finished, people were clamoring to look inside.

The Public Gets A Peek

Oprah even dedicated a segment of her show to the spectacular Spite House, and a camera crew was finally let inside. The whole world was bowled over by the tiny house, and viewers couldn’t believe how Sammis had transformed the interior and still somehow managed to retain the decor from the period in which it was built — and the result is breathtaking.

Hannan had done an excellent job of highlighting original elements of the house, leaving the brick walls and wooden floors intact. He had made changes to make the home more space-efficient, such as moving the heating and cooling system to a tiny attic space, and installed space-saving cabinets to accommodate a water heater and even a stacked washer-dryer unit.

The house had a distinctive 1930s feel to it, and is also reminiscent of being in the cabin of a ship. In fact, it is so similar that Sammis has been known to rent the house out to people who are about to embark on ocean cruises so that they can get used to living in such a small space.

The front door swings open to the living room, and everyone is surprised to see a regular-sized sofa wedged against the wall, which faces a decorative wooden mantelpiece. Just beyond the living room is an impressively narrow and steep stairway that has had the original banister and molding restored. the stairway leads to the second floor. Hannan worked hard to utilize the wasted space under the stairs and installed cupboards for extra storage. But the kitchen is where Sammis needed the most space.

On the opposite wall is a kitchen counter with a tiny sink and a 4-burner gas stove. Under the counter is a tiny refrigerator with a built-in freezer. A wooden table is pushed up against the wall, and three people can dine there comfortably. The table can also be pulled away from the wall to accommodate four or more, as there is a built-in bench at the end of the counter.

At the back of the house is a door that opens onto the patio, which is Sammis’ favorite part of the house. He uses the patio for house parties, as the interior of the house is simply too small to accommodate more than 5 people. The garden is stunning — with greenery and moss-covered cobblestones as well as artful lighting and built-in seating.

Upstairs, there is a retro bathroom and a stunningly charming antique ball-and-claw bathtub sit inside unassumingly, and the bathtub also doubles as a shower to save space. The narrow hall at the top of the stairs is lined with cabinets for added storage space. The entire house oozes character and delightful whimsy.

There is a bedroom upstairs, with an enormous window overlooking the street below. A double bed is wedged sideways against the wall to better utilize the narrow room’s space, “But you sleep the other way,” Mr. Sammis explained. “This was Matt’s idea.” A small cabinet frames the feature window and conceals a TV.

Most of the time, the Sammis family only use their tiny home as a weekend base. “Mainly summer weekends,” Sammis explained. “We can walk to the farmers’ market just down the street. There are restaurants, the parks on the Potomac.” They also have a 17-year-old son, who has fond memories of the house. He especially loved the view of the Washington Day parade as they passed on the street.
Must Read
Early Human Migration To The Americas Now Linked To Climate Change
Can Science Bring Back The Dodo Bird? One Lab Thinks It Can
Human Geneticists Finally Apologize For Horrific Past Experiments On Humans