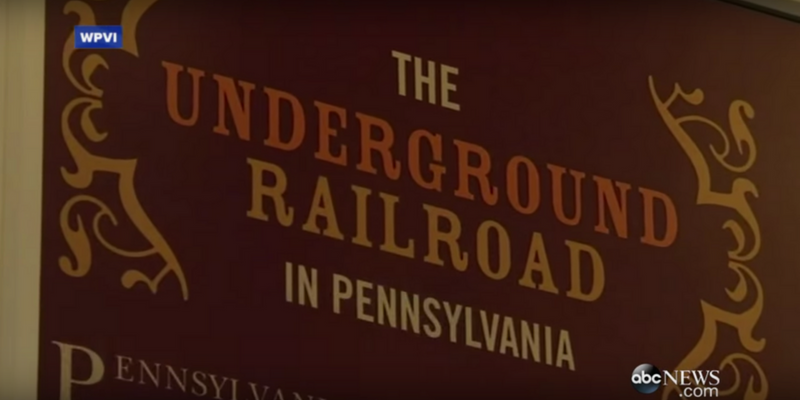 The allure of forgotten spaces and hidden doors has always made people shudder at the thought of the possibilities inside. Homeowners of older homes often wonder if there is something thrilling to find within the forgotten spaces, but it rarely happens. But for one woman, it did, and she made a startling find. What she found behind this particular hidden door caused her to completely lose her composure.

Alexandra Poulos’ parents had purchased their colonial property in 1974, and she only had fond memories of the home she had lived in as a child. The house was home to so many memories, but there had always been an undertone of eeriness for Alexandra. When she was a child, she had experienced recurring dreams about secret rooms and passageways. Little did she know that her dreams were more than just dreams, and what she’d eventually find.

Alexandra had a wild imagination as a child, but when she spoke about her dreams to others, they were merely brushed off as a product of her vivid imaginings. People assumed that she was creating a mystery to add excitement to her life. However, the dreams continued. She researched their meanings but was disappointed. But when she started to delve deeper as an adult, she was astounded by the insight and accuracy in her childhood imaginings.

Bad News For The Family

One day, Alexandra got some bad news. Her mother had fallen ill, however, it was somewhat expected because she had been getting on in years. The family brushed the news off and continued with their lives. They fully expected her to recover quickly as she was a strong lady. But they never realized their poor decision until it was too late. Alexandra’s mother’s condition had declined and was growing progressively worse, and they were starting to grow worried. Then, the unexpected happened.

Two harrowing ordeals took place, one after the other. Within a few short months, Alexandra had lost both her mother and her brother. The family was shattered by the news, and as they were a closely-knit unit, the family fell into disarray. Alexandra tried to make sense of the tragedies, becoming more despairing by the day. She had precious keepsakes and memories in that old house, so she received some comfort from its four walls. But she had no idea as to what it was hiding.

One death in the family can cause unspeakable anguish, let alone two in such a short period of time. Alexandra was thankful that she still had her father, and they leaned on one another and made it through. But another concern was presenting itself: Alexandra’s dad was elderly, and the colonial home was large and difficult to maintain by himself. Then, he broke the news to his daughter.

One day, Alexandra’s father invited her over to share some news. He explained that the property’s sheer size had made it completely unmanageable for one person to properly maintain. So he had plans to sell the beloved home. Alexandra was devastated. Her precious memories and her home were in peril and the hidden magic the home possessed was, too.

Alexandra wasn’t prepared for this news, but she quickly made a plan. She suggested that her father sign the home over to her, and he surprisingly agreed. Now, the home would be guaranteed to stay in the family, and Alexandra was delighted. Then, she decided to put the house up for rent, and she quickly found the perfect tenants. But soon after, the strange occurrences began, and they started in the basement.

The house seemed to be hostile towards the new family, and problems started to occur in the basement. Alexandra had an old warning in the back of her mind and started to question everything. Remembering a discussion between her father and a neighbor, she started to wonder if some otherworldly power held sway over her childhood home. The neighbor had said to her father that the house was hiding something depraved beneath its floors. Alexandra then began to look for the cause.

Alexandra’s father had waved off his neighbor’s warning, chalking them up to an old man’s ramblings. But with all the new occurances in the basement, she began to wonder if what the old man had said was true. The neighbor had told her father that the home’s basement had a second basement, hidden underneath. Alexandra, wondering if there was any truth to the statement, decided to do some investigating of her own. She hired professional builders to excavate the basement, and they did. What they found beneath left them aghast.

The builders, excavating deep beneath the basement, quickly realized that there was something strange afoot. Then, they confirmed what Alexandra had intuitively known all along. The basement had a basement of its own! Alexandra entered it and was dumbfounded. The room revealed little and raised more questions than it answered. It was an extremely simple room, but what was its purpose? Alexandra called in professional help once more. She just had to know why it was there.

Alexandra enlisted help from a local historian and quickly learned of the dark history of her hometown. The town had been home to abolitionists, who dedicated their lives to abolishing slavery in Northern America. They had created a secret network of tunnels, called the Underground Railroad. These tunnels were designed to help people escape undetected through Lansdowne. The historian needed to see the basement for himself, but what he found baffled him beyond belief.

The historian could reach no definitive conclusion as to what the secret room had been intended for. it could have been a simple storage room, but then why the need to seal it shut? The historian then suggested that the history of the home needed to be investigated further. Alexandra knew in her heart what the room had been for, and when a neighbor shared information of a similar scenario he had found in his own home, her suspicions only grew stronger.

Alexandra’s neighbor revealed an interesting piece of information. He too had found a similar hidden room in his home. He told her that the room was indeed part of the Underground Railroad, and Alexandra was then sure that this was the purpose of her hidden room, too. She had no conclusive evidence, but her feeling was too strong to shake. Then, she shared her story on social media in search of answers. Then, as comments flooded in, she began to piece together the facts about the hidden Underground Railroad from people around her hometown.

An Enigmatic Piece Of History

Decades have passed, but evidence of the abolitionists keeps surfacing. The Underground Railroad had been an ingenious system that helped Americans avoid a grisly situation. Alexandra’s historical and precious find only spurs her to explore the enigmatic movement further, and she wants to shed a light on the subject. “I need to figure out next steps,” Alexandra said. She is keen to pursue the room’s history and continues to investigate.
Must Read
Genome Studies Manage To Find A New Branch Of Fungal Evolution
European Space Agency Budget Increases By 10 Billion For The Next 3 Years
Artemis 1 Finally Launches: What It Means For Space Travel And Exploration