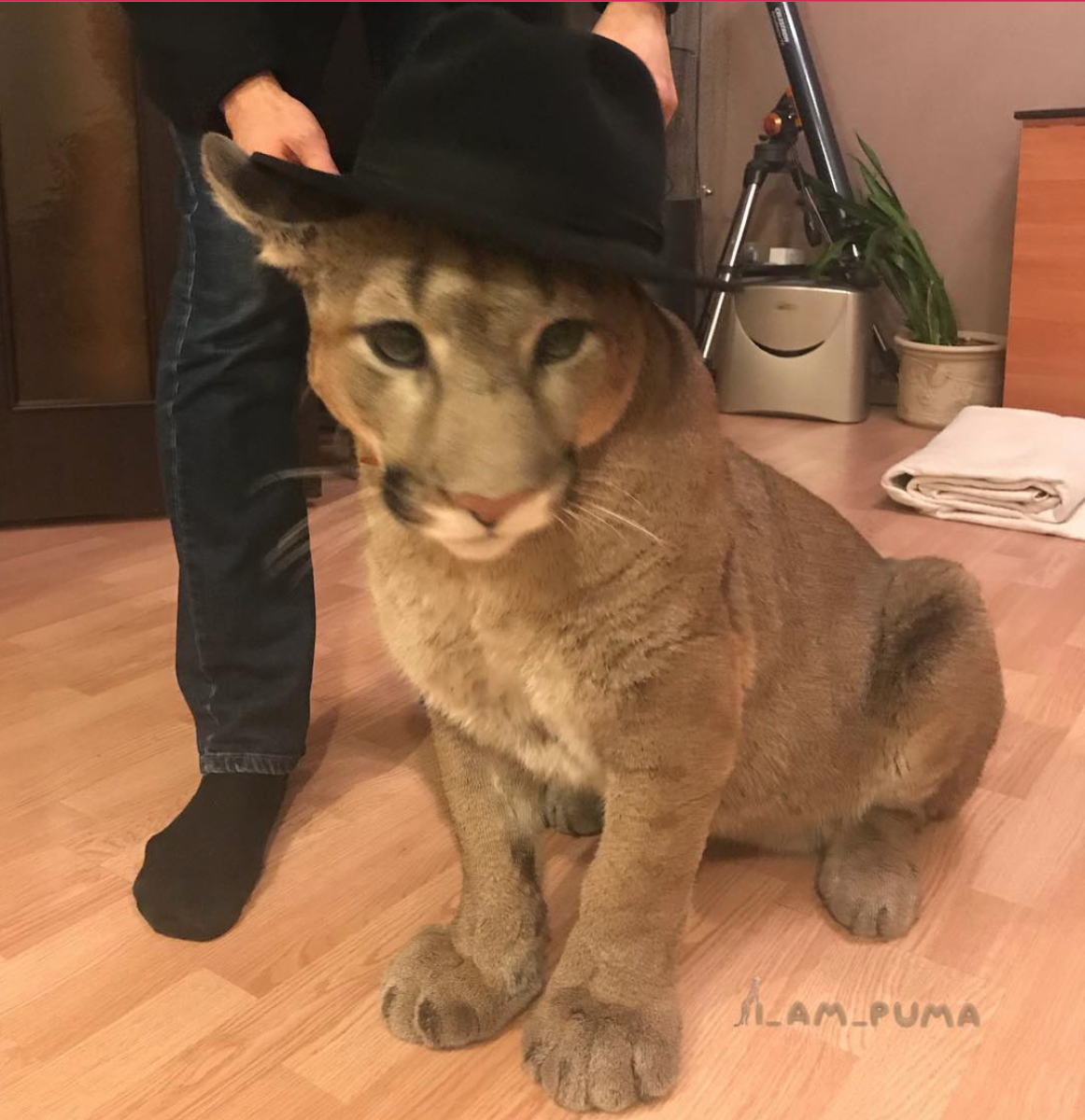 Messi lives in Penza, Russia. He has an Instagram account dedicated to him and his antics, which has attracted over 300,000 followers. Messi doesn’t live in a zoo or cat sanctuary, but in an apartment with his human guardians and a housecat. Messi is a two-year-old puma.

Aleksandr and Maria Dmitriev had first met Messi at a local petting zoo. He was about a year old, and it was love at first sight for the Dmitrievs. The couple were ardent cat lovers and decided to speak to the owners of the petting zoo. The owners then told them the puma’s tale.

Messi, who had been born at the Saransk city zoo in October 2015, had started to present numerous health problems by the time he was just three months old. He was then sold to a petting zoo. The Dmitrievs, after hearing Messi’s story, decided to ask the petting zoo owners if they could buy Messi from them. And, Surprisingly, they agreed.

The Dmitrievs quickly realized that Messi would never be able to live in the wild, even when he reached adulthood. Messi required constant monitoring and medical attention, and they were worried that he would become an easy target for larger pumas in the wild. With their minds made up, they decided to bring him home in hopes of domesticating him — an endeavor the couple didn’t take lightly.

Aleksandr and Maria, after conducting some research, remodelled an entire room in their apartment to meet Messi’s every need. The walls were lined with bamboo, and there was even a tree in one corner with a comfortable hidey-hole in its trunk. Every door jamb was converted into a scratching post, and an entire wall was dedicated to a large mirror so that Messi would have some mental stimulation. But Messi’s living quarters proved to be just one challenge.

Rising To The Challenge

Unfortunately, Messi also suffered from chronic cystitis, so he had to urinate often. The Dmitrievs put a stool by the bathtub so that he could climb into it and use it as his litter tray, and eventually, they managed to house train him. He now goes for walks twice a day, in the morning and evening, to do his business. Now it was time to address his other health issues.

Messi also suffers from rickets and muscular atrophy, which is probably due to neglect when he was a cub. The Dmitrevs are careful to administer vitamin supplements, and they also took him on short walks to build his muscles and strengthen his bones. They gradually increased the distance he walked each day, but then his old fractures started to make him limp again. The couple knew it was time for a change of strategy.

The Dmitrievs were committed to keeping Messi fit and active, so they searched for a wild animal handler to train him, but everyone refused. Then, one bobcat trainer agreed to help. The trainer began by training Messi one-on-one at first, then he took him to a dog training school to attend classes. Messi proved to be rather intelligent, and he learned the basic commands quickly. At home, things started to improve, too.

Messi started to open up and warm to the Dmitrievs, becoming more and more affectionate. Like a house cat, it turned out that he loves to be petted and cuddled. He is also playful, and even though his sharp claws could be dangerous, he soon learned to sheath them when he played, and he also learned not to bite. But someone was less than thrilled to have him there.

The Dmitrievs also had a six-year-old Sphynx cat named Kira. When The couple first brought Messi home, he immediately wanted to play with her. But Kira wasn’t interested, and lashed out at the puma with her claws and hissed. She still hasn’t warmed to the stranger in her home, but Messi keeps on trying. Messi may seem like a domestic cat, but he does have some special needs.

Aleksandr and Maria did extensive research to find out what nutrients a big cat like Messi needs — they knew he couldn’t eat cat food or human food. They feed him a diet of strictly raw meat and have been diligent to ensure that Messi has the best life they can give him. But that doesn’t mean they don’t have critics.

Environmental organizations and animal rights activists have insisted that the Dmitrievs surrender Messi to a wildlife reserve or sanctuary, saying that a wild animal can never be truly domesticated. They also say that Messi could pose a dangerous threat, as well as encourage the illegal wildlife trade. But Aleksandr and Maria remain steadfast in their belief that they are doing the right thing.

One Of A Kind

The Dmitrievs beg to differ from naysayers and believe that Messi’s is a unique situation. Messi would not be able to live in the wild, or even a protected sanctuary due to his health issues. They also discourage their fans from following their example and explain that Messi is one of a kind. Some disagree, but Messi’s fate lies with the Dmitrievs.

Russian animal welfare laws are extremely limited, and only address intentional death or injury to animals. No laws regulate exotic or wild animal ownership, so the Dmitrievs are within the law to continue keeping them. The controversy may rage, but Messi’s fame continues to rise.

Messi has a YouTube channel that has amassed almost 25,000 subscribers, but the puma’s stardom is really due to his Instagram account, which boasts over 295,000 followers. The puma’s hijinks have attracted attention from all around the world. Messi is only two years old, but he seems to have adapted to his new life surprisingly well. He seems to love his new domestic life with Aleksandr and Maria, and it is evident that he loves them just as much as they love him!
Must Read
Genome Studies Manage To Find A New Branch Of Fungal Evolution
European Space Agency Budget Increases By 10 Billion For The Next 3 Years
Artemis 1 Finally Launches: What It Means For Space Travel And Exploration