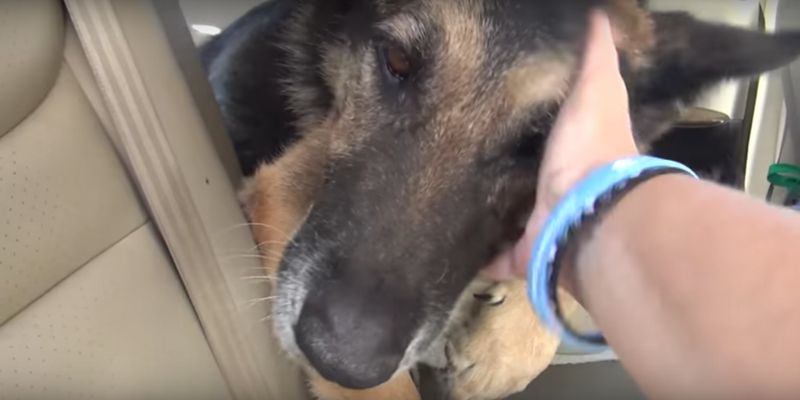 People don’t take note of how deeply we can affect animals, and most of us don’t give them enough credit. Maverick was one such dog, and he was deeply affected by his owner’s choices. It was immediately apparent that he just wasn’t the dog he once was, and he was severely depressed. He would avoid all eye contact and he had lost the spring in his step. But one day, as he was led out of his kennel, all of that was about to change.

Maverick had once been a happy dog, and he had come from a good home. Even though he was getting on in years, it didn’t seem to bother him. He loved his family and led a full life. But he was blissfully unaware that his life was about to take a drastic turn, and everything he knew would be taken away. One walk would change his life forever.

Maverick’s owners noticed the change in him as he aged. They were disappointed to see that he wasn’t the same exuberant and energetic little pup that they had fallen in love with, and they began to become disenchanted with Maverick. They knew that complications came with senior dogs and they weren’t sure if they could handle them. Then, something happened that finalized their decision.

As Maverick’s owners watched his age catch up to him, they started to research about how to care for senior dogs. But what they read was overwhelming. They learned that German Shepards are prone to incontinence, and worse — cancer. Treating cancer could be extremely costly, so they made a difficult decision.

Maverick had been a happy-go-lucky dog, but that suddenly all changed. His owners had decided to give him up, and he couldn’t understand why his life had changed so much. Out of the blue, he was forced to leave his happy home and move into a kennel. At first, he was confused and had trouble processing his new surroundings, but then separation anxiety kicked in and things took a turn for the worse.

When Maverick’s behavior started to turn, the staff noticed immediately, and they started to give him extra attention. They made sure he was petted and played with as often as they could. But Maverick still struggled. His whole world had been turned upside down in a blink of an eye, and he couldn’t comprehend what had happened. The staff was kind to him, but they weren’t his humans. Then, one day he was led out into a whole new situation that changed his life forever.

Maverick was showing signs that he was not coping with his new situation at all. The staff had noticed that his whole demeanor had changed when he finally realized that he was there to stay. Depression hit him hard and started to set in. Maverick was not the same dog anymore. But what he didn’t realize was that this was only a temporary home. Then, when he saw where he was being taken, his behavior changed again.

The staff, seeing that his depression was growing by the day, decided to take drastic measures. Maverick obviously craved a home to call his own. The staff rallied behind him and desperately shared his story in hopes of finding him a home. They shared post after post on social media, urging the public to adopt the older dog. But responses were not what they had hoped for. Then, one day, a couple surprised them all. That couple then led Maverick into the unknown.

Although the team tried their hardest to share Maverick on social media, the response was far from what they had expected. They began to wonder if Maverick would ever be adopted. Senior dogs often have trouble finding new homes as people are enamored with a puppy’s cute appearance — and older dogs may present other challenges. But the team kept trying, and then one day Maverick’s luck changed. But when the team saw where the couple were leading him, they were astounded.

On the day that Maverick was led out of the shelter, he hung his head low and avoided eye-contact. He walked out into the open, and he had a look on his face as if he thought he was about to be reprimanded. Maverick resigned to be led to the woman, but when she began to lead him away from the shelter, he started to realize where they were headed. His demeanor instantly changed. But then, he did something completely out of character.

Maverick saw the unfamiliar people and continued to look down. Then, they fastened a new leash on him and led him away. Just then, one of the women started to give him attention — the attention he so desperately wanted and craved. She scratched his head and uttered words of encouragement. Then, they reached the parking lot, and Maverick was lifted onto the truck. Maverick knew where he was headed now — to his new home!

Maverick walked to the car and the change was astoundingly noticeable. The more petting he received, the lighter his step became. As soon as he had been lifted into the truck, he lay down, relaxed and content. And then he made a face that looked like he was grinning from ear to ear! Maverick had realized that he was going to his forever home, and he showed his happiness on his face. But he wasn’t the only one who had great news that day.

The Power Of Social Media

Maverick had gained a huge following, and when the video of him being taken home was shared, it received over 200,000 views! The staff at Carson Shelter had really put a lot of effort into his story, and it paid off. Thanks to their hard work, Maverick had managed to find his forever home. This changed the way the shelter saw social media, and they now knew that there was tremendous power in sharing their videos. They started to share more adoption stories, and this sparked something even bigger.

The shelter soon began to receive more interest, all thanks to Maverick’s enormous following. People were touched by the video of his rehoming, and this helped raise awareness about what a difference they could make in a shelter dog’s life. Adoption applications started to flood in, and many more pups at the shelter are receiving the love they deserve. All this, thanks to one special dog and the dedicated staff who were determined to find him a forever home.

Maverick has been elusive since being adopted by an amazing couple, but thanks to him, awareness was raised for the other dogs at shelters. He was a broken, defeated dog when he arrived, but when he was lead onto his new path, something changed in him — for the better. Maverick has inspired many to adopt dogs at shelters, with the help from the kind and understanding staff at the shelter.
Must Read
European Space Agency Budget Increases By 10 Billion For The Next 3 Years
Artemis 1 Finally Launches: What It Means For Space Travel And Exploration
Clam Species Presumed Extinct For 40,000 Years Has Been Found Alive