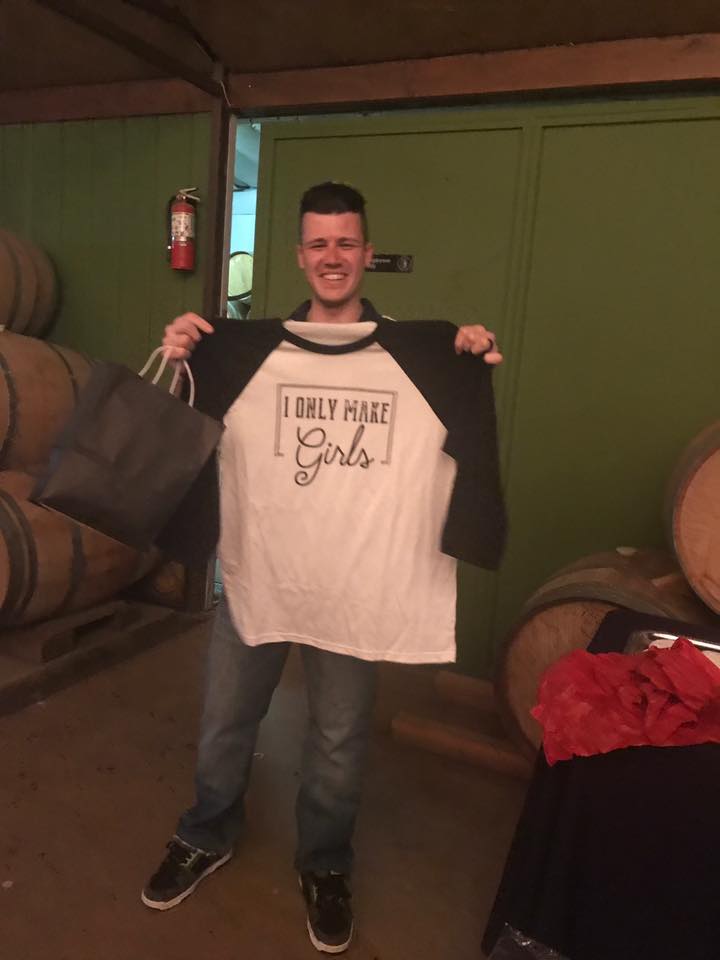 Protect and serve – That’s what the United States military does. Every day thousands of troops and members of the armed forces are sent on deployment that keeps them away from their loved ones. These can range from months to even years, which undoubtedly causes a strain on military families. As technology has progressed, now loved ones can keep in touch via emails and phone calls, but it is a sad fact that this block of communication leaves room for a lot of things to go wrong. And nobody knows that better than Navy Sailor Matthew Wilson.

Wilson was served deployment outside of the USS Carl Vinson for a long six-months. Being away from family was hard, and more so when he had so much going. It was a difficult time for Wilson, but in a military marriage, duty is always prioritized. But not only were his hardships abroad, to make things worse, his wife Rebecca back home seemed like she was hiding something every time they talked. He could not pin-point what was wrong with her, but he knew something was off – and considering their sordid past, he was not wrong to feel like that.

Life As He Knew It

Wilson and his wife were high school sweethearts and were living the dream. They had been married for almost five years when he was assigned his third duty abroad. They had a child and a beautiful​ home in suburban California. They were seemingly happy together and caused a lot of envy. But when Wilson came home from his second tour, he encountered every dad’s worst nightmare. Everything as he knew it, had disappeared.

As it turned out, his wife Rebecca had had enough. As he got home, it was like his family had never existed. Rebecca packed her things and moved back to her hometown with her son. She could not take being on her own for so many days, months, at a time. She had been completely alone with a newborn for over a year, ​and she was beyond tired. Wilson could understand to some extent the hardships she had been dealing with and learned to forgive her, but still, he felt nervous every time he would hear from her. And one phone call and two children later made him lose trust in her again.

​Wilson, being a child of divorced parents, promised himself that he would never go that route. He knew how hard it was on the children, but what other option did he have? Nobody liked being lied to; deceit and infidelity are the most common in breakups. He knew he had to fight for his relationship, but what he could have never expected was how much. Wilson had no clue what his wife was up to, but of course, there are certain levels of dishonesty. Perhaps Rebecca could be forgiven? But what she had been up to this time was such an incredible surprise that it defied belief.

Seemed To Be Off

When a few months passed, Wilson got a message from one of his close friends back home. He went on to explain to him that she was acting weird and seemed to be off. She had shut herself off from society and not only that, but she was selling some of Wilson’s furniture! Despite his incredible love for her, he became anxious and knew something just was not right. As the date approached for him to come back home, he decided to confront her once he saw her. But still, he was very anxious to hear what she would have to say. And rightfully so.

Rebecca did not want to tell Wilson why she had been acting strange, so she knew the only way she could ​tell him was face to face once she saw him… “But then I thought about it for a few minutes, and I was like, ‘You know, this isn’t how I want to tell him – in an email,'” she said. “I emailed him back and said, ‘I just miss your voice.’” She did not want to waste another minute not telling him, but she had to. These vague emails didn’t soothe all of Wilson’s worries. Then, Wilson’s team got orders to go head-to-head with one of the world’s most powerful nations and Rebecca’s plan was crumbling right in front of her.

Rebecca admitted that it was excruciatingly hard to keep this life-altering news a secret, and more so when Wilson’s deployment had been extended. He had to serve a whole month more in service as the USS Carl Vinson was ordered to make a show of force along the coast of North Korea. While Wilson was overseas fighting and protecting his country, Rebecca was at home doing something no one could ever have​ expected.

​When Rebecca got the news about his extended deployment, she couldn’t bear not telling him her news. “I got emotional about it and I was wondering, ‘Should I tell him? Would I feel guilty if something happens and he doesn’t know?'” Rebecca recalled. “I went back and forth about it.” She didn’t know what to do, as she weighed the options, her news could indeed hurt his performance. Rebecca decided to do something better, she cooked up a plan that was just perfect.

It was time for Wilson to come home. As he approached, large crowds had swarmed welcoming home their sailors. Rebecca was among this crowd, ​but still, she had a perfect plan in place. She used the kids as distractions as they went up to kiss their dad. Still, Rebecca had a homemade “Welcome Home” sign which she placed strategically. When the kisses and hugs from their children had finished, he turned to approach his wife, but as soon as he was close enough, she dropped the sign. What Wilson saw them was so incredible, he was lost for words.

Wilson was utterly​ perplexed and had no idea what has just happened. “My heart was racing,” Rebecca recalled. “I stood back and let the kids run to him. I hung back for a minute, and then he reached into me to hug me and then I dropped it. He just stood there in shock. He didn’t know what was going on.” At one point, Wilson even thought this was some kind of prank, to say he was surprised would be an understatement.

The kids were the first ones to rush over to greet their father, and Rebecca stood back so she could continue her ruse. As Wilson turned to hug someone, Rebecca was there to one side holding a sign that read, “Welcome home baby daddy.”​ As Wilson is a father, he didn’t think much of the sign, “Do you like my sign?” Rebecca said to her husband. But then, before he could even reply, she dropped it revealing her massive baby bump.

​Wilson, clearly very confused had no words. “She said, ‘Surprise!’ and dropped the sign, and I was confused,” Matt said. “And then I actually poked her belly because I wasn’t sure if she was playing a trick on me or not. Clearly, she was not. There were a lot of thoughts going through my mind. When it was real I was extremely confused, so I asked, ‘Is that real?’ to be sure, then hugged her because it was the only thing I could think to do.” He was in utter disbelief, but the surprises don’t just end there.

Wilson was still in shock. Everyone around him was laughing and cheering them on, but again, he had his doubts. A good ten seconds later, he hesitantly poked Rebecca’s belly and asked, “Is that real? Nuh-uh!” Rebecca had managed to keep such a huge secret from him, and he was positively​ surprised.

The secret started just a week after Wilson left to fulfill his duty. “I found out about a week after he left. I didn’t believe it,” Rebecca said. “I took the pregnancy test again, and I was like, ‘Oh no way.’ I was excited about it and I emailed him, ​and I told him to call me as soon as he gets a chance.” But still, she didn’t want this incredible news to interrupt his duty.

As it turned out, the couple had not planned on having a fourth child. This surprise was more than unexpected, but they were excited beyond belief. Rebecca even described that Matt “was only home for a short time” between his deployments, so this was a huge shock. However, there was still one more thing brewing, and this too would give Wilson another considerable blow​.

Rebecca had mastered disguising herself; she recalled it being the hardest thing ever. Every time she would go out with friends or family, they would all want to take photographs, and of course, Rebecca didn’t want to spoil the surprise. She had to get creative to disguise her pregnant stomach. I would always use the kids to cover my belly,” she said. “My best friend always does Snapchats, ​and she would put emojis in front of it just in case to throw him off.”

“I wanted to share the excitement and joy with him about getting a fourth baby. He definitely wasn’t expecting it,” she said. “Being pregnant is such a fun experience and not being able to share it with him it was really hard. I was working the whole time and taking care of the kids, ​so I had to push through everything.” Rebecca did feel bad at times about keeping the secret, but still, she knew she wanted to tell him face to face.

Rebecca had one more surprise, and this time she had planned on the surprise being for both of them, together. “I decided I’m going to document it with weekly belly pictures for him so he wouldn’t miss it.” And that’s just what she did. “I can’t believe she was able to keep the secret for as long as she did because we tell each other everything so I know it was really hard for her,” he said. “I’m sure every day she wanted just to tell me​ but I’m really happy she waited because it was an awesome homecoming surprise and we got to find out the gender together the day after I got home.”

Friends and family gathered for Wilson’s homecoming party, and while everyone was gathered they also revealed the baby’s gender – a girl! “I was extremely happy with the news because we both wanted a fourth child and since it is our last I was happy she did something memorable and fun,” said Wilson. He was not set to deploy until January, and the due date of the baby was for August. Making the timing impeccable for this family to be reunited again. ​ This is a work of fiction inspired by a true story. Some names and identifying details have been changed to protect the privacy of individuals Names, characters, businesses, places, events, locales, and incidents are either the products of the author’s imagination or used in a fictitious manner. Any resemblance to actual persons, living or dead, or actual events is purely coincidental.
Must Read
Genome Studies Manage To Find A New Branch Of Fungal Evolution
European Space Agency Budget Increases By 10 Billion For The Next 3 Years
Artemis 1 Finally Launches: What It Means For Space Travel And Exploration