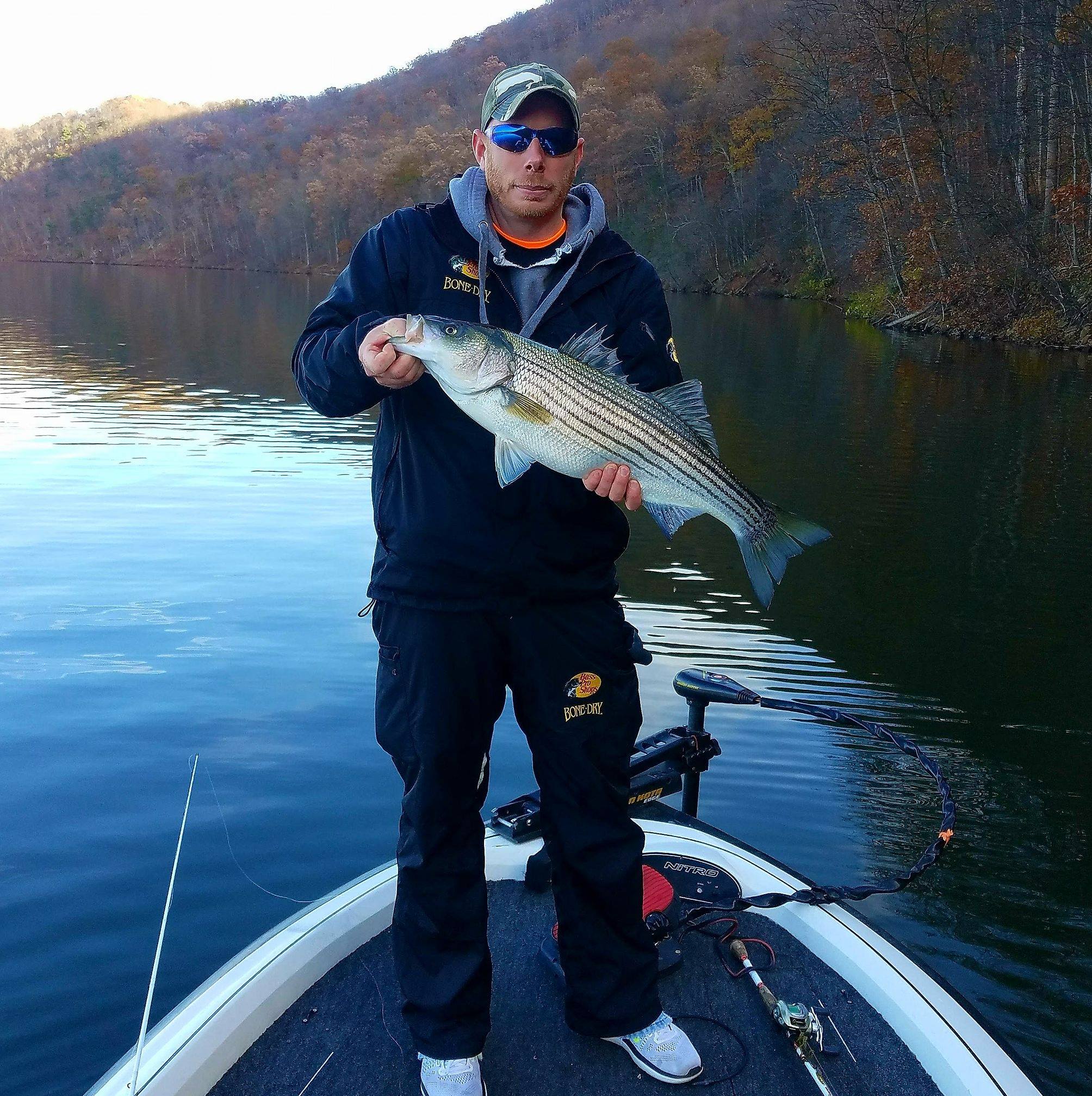 Some humans are brave enough to risk their own life to save another. This fisherman expected a relaxing day on the water, yet it turned out to be anything but. Brad’s story shows the power of going with your gut​ and doing what’s right, even when no one is watching.

​Some fishermen crave the excitement that fills them after they cast their line in the hopes of reeling a delicious fish into their boat. Others seek peace and serenity in escaping the real world hustle and bustle for a calm day away. Brad’s day started as such, and the water beneath him was quiet and peaceful. He wanted nothing more than to enjoy the time he had by himself and his fishing line. Out of the corner of his eye, he could see a large brown shape floating towards him. Brad didn’t think much of it as it looked like a mere branch. Brad’s dream-worthy day didn’t go as planned. As soon as the mysterious silhouette inched closer to him, he finally could see – this was no branch at all. Shivers immediately went up and down his spine, he had to get out of there, and quickly.

It was a brisk May morning when fisherman Brad Meck left his home in Pennsylvania and headed to Raystown Lake to spend the day absorbing the sun and silence that fishing so often brings. After a tough and stressful week, Brad felt he needed this getaway. However little to Brad’s knowledge, by the end of the day, he wouldn’t know how to put the events into perspective.

Brad was from the small town of Everett, Pennsylvania. The town has a vast history and is known for its incredible surroundings. Mountains pile up around you as it is located in a valley of the Allegheny Mountains, giving this small town an astonishing presence. Everett is also home to an extensive lake beautifully surrounded by trees and wildlife. It was not unusual to see people spend their times on boats in the lake. He began to contemplate the idea of spending the​ day out on the water. Brad could never have expected his day to unfold as it would.

Started As A Relaxing Day

Brad gathered his fishing gear and his lunch, and headed out. Once he settled into the boat and got comfortable with the sun on his back, he cast his first line. After Brad rested his feet, he noticed near him was a long log floating in the water. All of the sudden, Brad started to get restless when he took off his sun glasses and realized this log was moving towards him… and quickly.

​He reached for his paddle and looked around the lake to see what danger was headed his way. It couldn’t be a log, could it? The lake was calm; there could be no way the log was being pulled so quickly by the current. There was no current! Brad became nervous and kept his eye on this mystery that lurched his way. But little by little, the thrashing water became closer and closer to his boat. Something in Brad’s subconscious put his whole body on alert. But why?

Brad was initially quite startled, as he was alone and very unsure of what exactly was heading for him. All of a sudden, he spotted some fur on the log, quite a lot of hair, in fact. Brad convinced himself it was a rodent. He thought it could possibly be a beaver. Relieved to be out of imminent danger, his body began to relax. Little did he know, he should have never trusted his instincts out on the water ​that day.

Brad suddenly became aware that this was no log at all. As he was startled, he brought himself to his feet, but doing so caused the boat to rock. Brad eventually caught his balance and peered closely. As he did, the boat began to shake uncontrollably and he knew he was doomed. But before disaster struck, he held onto the boat and on his knees crouched down, successfully securing the boat. Suddenly, a cold sweat started forming all over his body. This day was not going at all as planned, and to make matters worse, the animal was approaching Brad even faster than it had been before. What did it want? And was he sure it was a beaver?​

Both Brad and the creature paddled within an eye’s view of one another, which is when Brad realized that it was a baby animal that was barely afloat. The animal had detached itself from the log it was initially gripping. It was clearly struggling to keep its snout above the water. He knew he had to do something to help. This poor little beaver must have been incredibly tired from all the paddling. Brad then dove for the creature — but forgot to check one painful fact. ​

Saviour Of The Day

Not only had Brad become aware that this creature was no log at all, but it was alive. And he knew this guy needed help. But still, the animal was too far away for Brad to help him. Eagerly, he decided he was going to paddle that way. He didn’t want anything to suffer while he was around, and more so when he could do something to help. As he got within arms reach of the creature, he stretched his arm as far as it could go and grabbed onto the animal. Little did he know, this was no log or beaver. What had he just grabbed?​

Once Brad had a firm grip on the creature, he pulled it out of the water and placed it at the base of the boat. He recognized with a hint of fear that it was a baby cub. The little guy looked small and weak, just a newborn. He was struggling immensely to breathe due to all the water he had consumed. The cub couldn’t catch a breath and began to choke, Brad had to think quick on his feet. He needed to save this poor little animal, but how?

Then Brad came back to his senses, and became frantic, now worrying that the cub would bite him — or worse… that the mother was near. The little guy sneezed and released excess water as Brad scoped the shore in search of the dangerous mother bear. Brad was certain she would be at least 10 times the cub’s size, and his instincts this time were not at all wrong.

Holding On For Life

Brad reached in his backpack beside the little cub to call for help. He recognized that being completely alone with a bear at his side was a threatening position. As he checked his backpack pockets, he considered whether the wildlife rescue crew or the police would arrive faster. In the end, neither would get the job done because he looked at his phone and had no service. There was only one option left for Brad, and he wasn’t​ too happy about it.

Suddenly, a plan came into Brad’s head, and as he had no other options, he acted on it. Brad paddled towards the shoreline that the cub had been heading towards before seeking refuge in Brad’s boat. He reasoned that if this was the cub’s initial path, the mother must be near. Once ashore, Brad again got a grip on the small animal. However, when Brad looked up, he felt cornered and noticed something in the distance.

The trees had cast large shadows on the forest floor and the bushes whistled with the intensifying winds. Brad continued to mistake these images and noises as the mother bear. In a quick moment, Brad bravely reached again for the cub so he could place him on the ground. However, when Brad reached for the cub, it responded unexpectedly.

Cub Left To Fend For Himself

The creature stayed motionless and very calm. Brad felt the cub was unable to hurt a fly. He no longer worried that the cub would bite him, but he now worried what the cub would do if he couldn’t reunite with his mother. Brad noticed the cub was gaining strength as they reached the shore, so he knew what it was time to do.

Brad grabbed him and let him wander back into his natural habitat, but sadly, not at his mother’s side. Brad pulled out his phone, but this time to videotape the cub’s departure. The tiny creature crept back into the woods, but before getting too far, it looked back at Brad – almost thanking him for rescuing his little life.

Once the cub disappeared into the woods, Brad returned to his boat. Along the way back to his truck, Brad reflected on the risk he took saving the baby bear. He also pondered what would have happened had he not taken this day off to go fishing. Brad spoke to the news and rescue committee the following day in the hopes that there would be news on the whereabouts of his furry friend.

Then, there were reports that a bear cub and its mother had been spotted by hikers in the area. Brad knew in his heart that it was the little cub he had saved, finally reunited with its mother. But Brad was lucky. Had the mom seen Brad with her cub, it is likely that he would have been viciously attacked. The presence of a bear is dangerous, but this danger intensifies when a human comes near a mother’s cubs.

A Bear Reunited With Its Habitat

Rescue committees and experts urge humans in situations like Brad’s not to touch animals in the wild. Normally in the wild, one shouldn’t assume the animal is alone. However, in this case, because the cub was drowning and at risk of dying, Brad did a wonderful deed. He indeed saved the animal’s life.

Brad surely did not experience the tranquil day he had expected. However, he is thankful he was there to get the little cub out of danger. Next time, Brad might consider bringing a fishing companion to help him when he gets in harm’s way. Though the experience was thrilling, we can assume Brad does not wish for a next time. The little baby cub may have been the only catch Brad had that day. If you have any questions about what to do when you come across wildlife, The Pennsylvania Game Commission recommends you contact local authorities.
Must Read
European Space Agency Budget Increases By 10 Billion For The Next 3 Years
Artemis 1 Finally Launches: What It Means For Space Travel And Exploration
Clam Species Presumed Extinct For 40,000 Years Has Been Found Alive