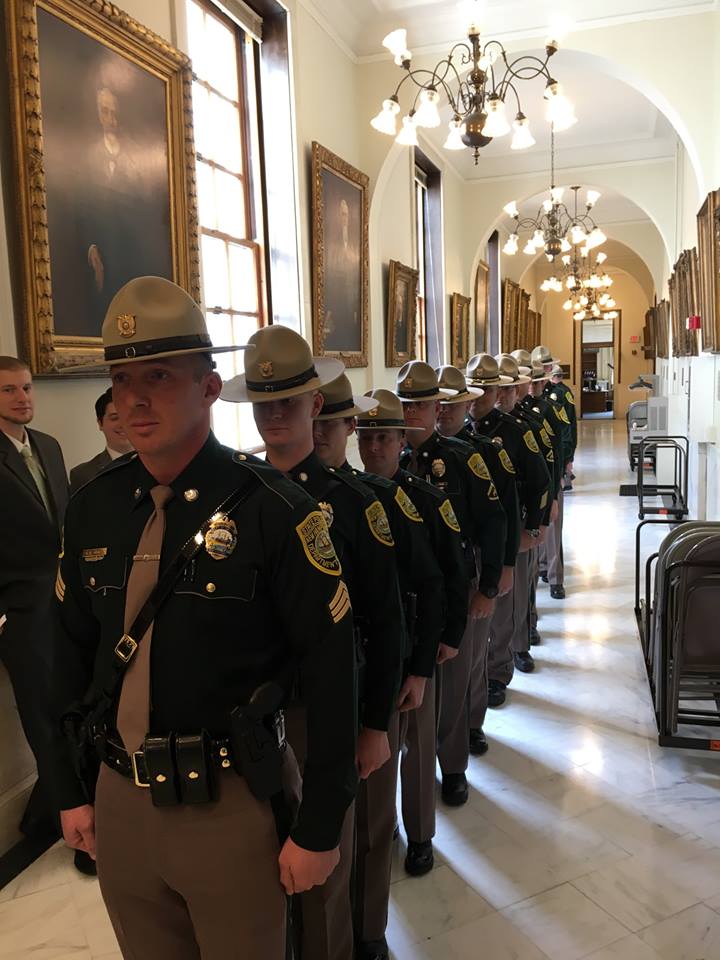 He waited silently. He saw the creature making its way back and forth again and again. What was it doing? What did it want? Then, he jumped from his car.

The giant animal stomped back and forth on the wide, open road. Its sharp claws scratched against the black tarmac. During the night, they were hardly visible, blending in with the dark. But during the day, their presence was obvious. He knew he had to act fast.

State Trooper Thomas Owens gripped the wheel. Traffic was growing by the second. Car horns were becoming more frequent. The beast was spooked. And people were losing their patience. He edged his vehicle down the road. Then, he noticed something in the bushes.​

When Thomas Owens was a boy, he was obsessed with car chases. He came home from school every evening hoping the news would show a glimpse of a getaway driver. Some cases ended in tragedy but most ended in justice.

Most of the time, law enforcement managed to catch the bad guys and restore peace and safety to the roads. But Thomas’ mother worried about his obsession with high-speed chases. And a mother’s intuition is hardly ever wrong.

Thomas’s father had to pry the set of keys from his mother’s hands on his sixteenth birthday. She dreaded the thoughts of her only son driving on the road. Maybe he would be a danger to himself. What if he harmed someone else?

“It’s a small town, Thomas. If we get one sniff of you being reckless, you can say goodbye to the truck,” she warned. Thomas was young, but he was responsible. He knew the dangers of the roads. But he never expected his parents to forget them.

An Incident That Changed His Life

Thomas loved his independence. He picked his friends up for school, dropped them home, cruised to his part-time job in his local grocery store, and then returned home. He made sure to stay safe. But when he arrived back one day to discover his mother’s car missing, he panicked.

Later, he discovered that she had been involved in a hit and run. Distraught, he could not fathom how someone could do that. Over the next few weeks, he stayed by her side for hours a day. The incident made a huge impact on his life, and that changed his course for his future.

During his senior year of high school, Thomas’s friends couldn’t help but share their intentions to attend college. They had big dreams of becoming doctors, scientists, teachers, and athletes. And when he shared his plan to become a state trooper, they weren’t surprised.

After his mother’s accident, he stopped attending their car chase marathons. He was far too familiar with the reality of dangerous driving. However, he underestimated some parts of the job description.

In his years in law enforcement, Thomas had never seen anything like this before. There was a commotion up ahead, and cars were backed up for miles. As he zoomed past the traffic, he had no idea exactly what scene awaited him on the road that day. But he had a sinking feeling that whatever it was, it must be serious.

At first, Thomas thought someone might have had an issue with their vehicle. But as he got a closer look, he could see why all the cars had come to a halt. And now, he could never unsee the situation again.

There was a hulking figure in the road up ahead. Then it dawned on Thomas that people were getting out of their cars to see what the commotion was about, and he started to yell.

Bretton Woods spans across 700 acres of land. The area is home to nearly 200 species of birds alone, so it’s no surprise that the land became a protected wilderness. But Thomas was about to encounter the biggest animal in Bretton Woods.

Encounters with one particular animal were all too common, and each dangerous interaction with bears can have a different outcome. All of Thomas’s experience didn’t prepare him for what he was about to face.

Thomas knew his training when it came to interacting with dangerous animals. But still, he never could have prepared for what he was about to encounter. There, stopping traffic was an enormous black bear.

Middle Of The Road

She was pacing aggressively back and forth across the busy main road. The scene was chaos as Thomas yelled for people to return to the safety of their cars. Bears usually kept to themselves around these areas. Why was this one different?

The drivers scrabbled back into their cars when they heard Thomas’ warning yells, and they were now protected by sheets of steel. But Thomas, exposed and on foot, had nowhere to turn.

All the drivers were now waiting, terrified in their cars, but it didn’t seem like she would move. He decided to tell everyone to turn back. They had to give this incredible and dangerous animal space.

As cars started to turn around, Thomas got a closer look at what was keeping this bear so occupied in the middle of the road. As he mustered up all his courage and took a step closer, he knew precisely why this bear seemed to have no fear of humans.

Thomas crept forward to get a better look. Then, he noticed the bear had some followers. Four cubs ambled across the road. Three followed their mother to the other side, but one struggled. It sat down to rest its legs.

These little cubs seemed very young, but still old enough to get around on their own. This little guy wouldn’t budge, and she seemed to be getting sick and tired of waiting. Then, this mother did something unexpected.

Momma bear returned to the cub’s side and began to nudge him with her nose. She slowly walked to and from either side of the road, showing her young what to do. Thomas couldn’t believe his luck. He had never seen a bear with three cubs, let alone four!

However, after a few minutes of watching her struggle to get the cub to stand, he knew something was wrong. Thomas watched her return to the shelter of the trees, leaving one young cub to fend for itself. His heart sank. Then, he sprang into action.

Thomas rushed to the abandoned cub’s side. Then, Thomas noticed that the poor cub could barely keep its eyes open. It tried to stand, but then collapsed. Something was terribly wrong. He scooped the sick cub up into his arms and ran back to his squad car. Would he make it in time?

On the way to the New Hampshire Fish and Game Center, Thomas couldn’t help but think of the mother bear. Sure, her baby was sick. But was that really an excuse to leave it to fend for itself?

In the wild, most bears had a litter of two cubs, three cubs were rare, but four were practically a miracle. Understandably, some were stronger than others. Thomas raced to the center where he was met by vets and nurse, and they all worked tirelessly through the night.

Thomas later discovered the logic behind the mother bear’s decision to abandon her sick cub. Although the cub was well nursed, the likelihood of the cub’s survival without the correct help was slim. If she had stayed with the sick cub, she would have put the rest of the litter in danger.

News of Thomas’s rescue spread across the small town. Then, officials gave Thomas some more shocking news! This baby was not the only one who had been abandoned. The mama bear had five cubs by her side! Thomas knew exactly what he had to do.

Thomas was met by more state troopers accompanied with multiple K9 units. If they couldn’t locate the cub, the canines were sure to sniff it out. It wasn’t long before they managed to locate the poorly fifth cub not far from its mother’s crossing location.

It was cold, wet, and hungry, but they managed to get help just in time. The center had a tough decision to make — What were they to do once they cubs were healthy? They couldn’t bottle feed forever.

Thankfully, the siblings made a swift recovery and their carers put it down to their constant company. Most rescued animals take time to recover due to stress and isolation.

These two cubs prove that love is the greatest healer! The center intends to reunite the cubs with their mother once they are strong enough. And there’s one person who has kept a keen eye on their progress.

Thomas has come across many strange things as a state trooper. One thing he never expected to save while on the job was a one bear cub, let alone two! If it wasn’t for his quick thinking, the two cubs may not have made it.

And although he’s dedicated to protecting the citizens of Carroll, New Hampshire, Thomas has made sure to include all residents in his efforts, including those who walk on four legs!
Must Read
New Study Suggests Teacher Evaluations May Perpetuate Academia's Gender Biases
Rare Earth Elements Can Potentially Be Pulled From Coal Waste
United Arab Emirates Names Oil Chief To Lead Upcoming Climate Change Conference