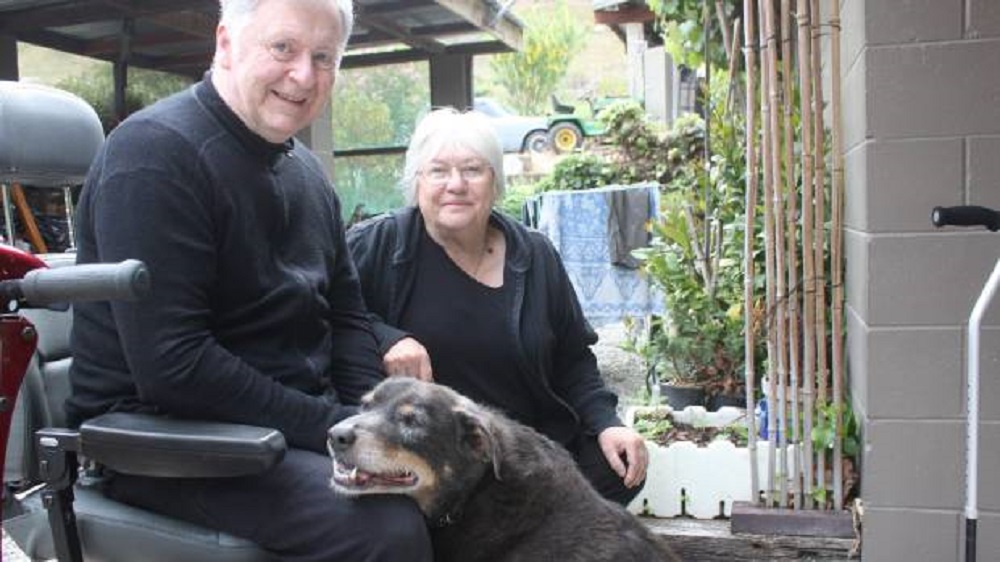 Old Louie the sheepdog went missing for a day, leaving his owner incredibly worried. When he finally returned, a strange note hung around his neck.

Living on the fertile plains of New Zealand, Louie grew up among nature. Ever since he was a pup, he’d run freely across the farmland, herding sheep and exploring. Some days he would be gone until nightfall, but he would always be back for dinner. One day, when he didn’t appear by the usual time, his owners started to grow worried.

As he grew older, Louie had become less adventurous. While he would still walk around guarding the farm, his patrol grew ever shorter and slower. Now at the age of thirteen, he preferred to spend the day lounging in the sun and happily surveying the land below. When he suddenly trotted off one afternoon, it raised alarm bells.

Seeing Louie dash away took his owner, Marolyn, by surprise – “what’s gotten into him?” she thought, having not seen him move so quickly in years. Crossing the farm’s border, he disappeared from sight – perhaps there was a barbecue downwind? As the day drew on, Louie showed no signs of returning and she became increasingly anxious.

Thrill of the Chase

It had been a warm summer. Trees surrounded the farm and brambles had grown thick in the strong sunshine. It was not unusual to see hares, mice or foxes dart in and out of the tangled mass. Thinking back on Louie’s younger days, Marolyn remembered him chasing critters, furiously digging under the bramble. What if he’d gotten stuck chasing something?

No Longer a Wanderer

It was true, Louie wasn’t as spry as he used to be but his days of chasing rabbits seemed long gone. It seemed unlikely that he would suddenly wander off on a whim. He had grown comfortable on his porch, needing little more than sun on his face and some food in his bowl. There was something strange going on.

Unbeknownst to Marolyn, Louie wasn’t the only dog who had disappeared that day. Down the road, their neighbor, Rob, had noticed his little terrier, Maddy, was also nowhere to be found. For him, the situation was all the more upsetting as Maddy had never been one to wander off for more than an hour. What had they found, or worse, what had found them?

The Sun set. As the light faded away, Marolyn scanned the horizon once more. There was no sign of Louie. She rattled his food bowl for a while, hoping he might be drawn to the sound. After several minutes, she laid the bowl down, let out a sigh and withdrew to the warm house. All the worst possibilities were now racing through her mind.

The night dragged on. Resting in her bed, Madelyn’s mind was going through all the possible scenarios. It has been known for older dogs to find a secluded place to spend their final moments. “What if Louie had sensed his time had come? What if she never…” the thought was cut short by a scratch at the door… Louie!

Head bowed, Louie stood slowly panting behind the sliding glass door. His fur was ragged and full of twigs, mud covered his paws and belly. Maybe he had been chasing something after all. But for so long? As she opened the door, Louie made little effort to hide his exhaustion, slowly rocking as he walked to his bed and collapsed.

Marolyn’s relief quickly turned back to worry. She approached Louie to check for injuries. A couple of small scratches; nothing serious. Then she saw the note. From his collar hung a piece of cardboard with some writing: “Lu is the hero of the day. He led me to Maddy in distress, stuck under a branch pile. Cheers, Rob.”

Marolyn beamed with pride – it all made sense now. Old Louie had sensed little Maddy’s distress and rushed to her rescue. Her owner, Rob, had been looking for her since the morning but was forced to abandon the search and run errands in the nearby town. When he returned, there was still no trace of her. Until he saw Louie.

For an older dog, Louie had been surprisingly persistent that day. Rob was put off by his barking, bounding and almost feral attitude. After a few minutes unsuccessfully trying to calm him down, Rob realized what he was doing. He took a few steps toward Louie, who then ran away further. The dog was leading him to Maddy.

Barking, jumping and constantly looking back to check Rob was following, Louie led him to the edge of the farm. Pressing on through the surrounding thickets, they emerged in a clearing, where a tall pile of wood stood to one side. Lou dropped his nose to the ground, sniffing at a dense clump of branches under the pile. A faint whine came from within.

“Maddy!”, exclaimed Rob. Hearing her owner’s voice, the trapped dog let out a desperate yelp. “We’ve got you,” Rob assured her, “it’ll all be alright.” Louie led the effort, starting to dig furiously in the sun-hardened dirt. Rob started grabbing at logs and branches, carefully easing them out in case one came loose.

With Louie pulling with all his might and Rob trying to keep the pile steady, Maddy’s ragged beard eventually came into view. After what seemed like hours, Rob managed to lift the pile just enough that Maddy was able to crawl out of the hole dug by Louie. Hungry, filthy and shaking from the trauma, Maddy was finally free!

Keen to make sure his friend was alright, Louie followed the pair back to Rob’s house. Rob, of course, wanting to reward the hero for his perseverance, prepared an extra bowl of food and Louie tucked in. Certain that his owners would be worried, Rob quickly drafted a note and strung it around Lou’s neck before sending him off up the road.

The following day, Marolyn took Louie for a stroll. Still basking in the relief of his return, she greeted Rob and Maddy with enthusiasm. The two dogs trotted around, both still worn out from the events of the day before but happy in each other’s company. Still bemused by the unlikely story, Rob described it all in detail to an open-mouthed Marolyn.

There’s no doubt that Louie was the hero of the day. Having served on the farm for so many years, he knew the area better than anyone. If it hadn’t been for his keen sense of danger, Maddy may have been stuck under the pile and never found. It’s a great reminder of just how amazing dogs can be. Good boy, Louie!
Must Read
Genome Studies Manage To Find A New Branch Of Fungal Evolution
European Space Agency Budget Increases By 10 Billion For The Next 3 Years
Artemis 1 Finally Launches: What It Means For Space Travel And Exploration