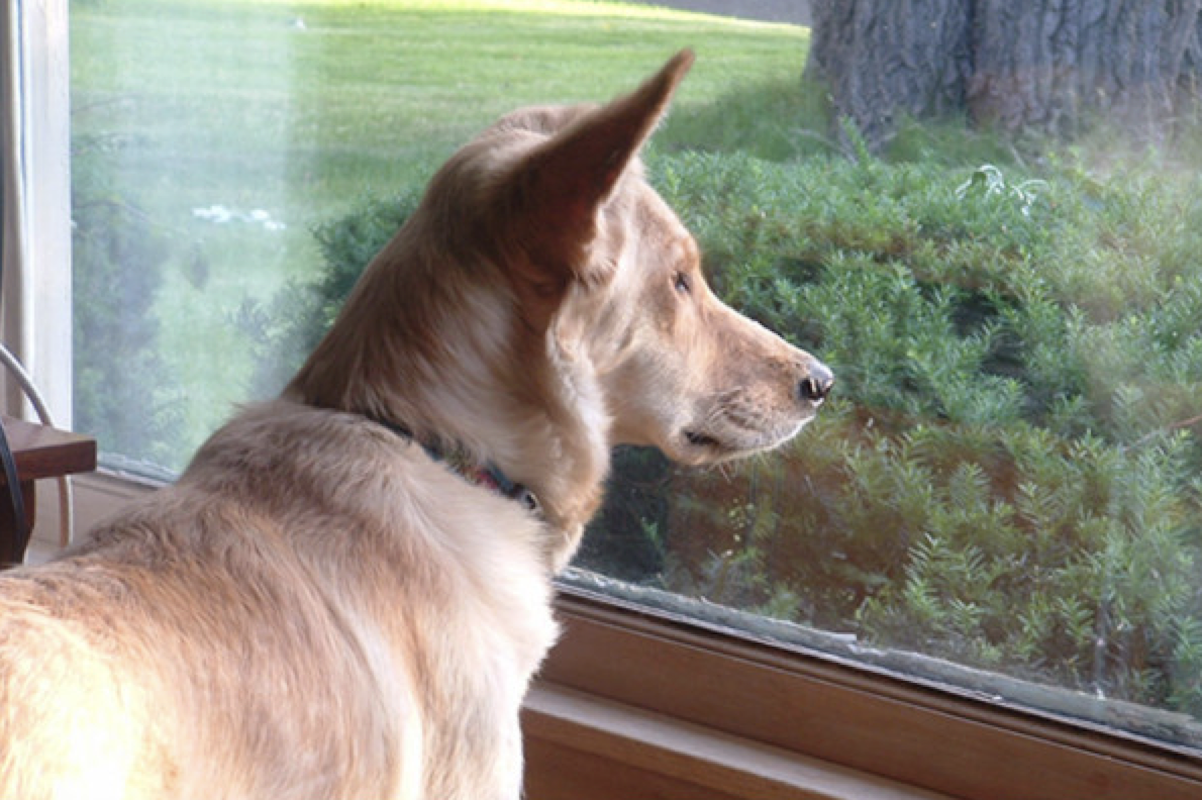 Burning A Hole With His Eyes

Kacy’s dog stared longingly out of the window. He did it three times a day. His unyielding gaze burnt a hole deep into the neighbor’s living room. Kacy, a proud pet owner, had thought that her dog simply wanted to go outside for a walk – at first. Every attempt to pry the peeping dog away had been futile, time and time again. What could he possibly be looking at? Kacy had absolutely no clue as to how to help her dog. Then, after a year, just like that… her dog totally snapped. After being stalked for a year, that’s when her neighbor finally took a stand. And then things got weird.

Just like in the human world, there is only one reason we would willingly do something as ridiculously irrational as staring out the window every day for a year. As it turns out, humans and their pets really aren’t so different. The reason is love. “Animals can’t fall in love!” You’re probably thinking to yourself, and you’re certainly not alone in your thoughts. Many people don’t believe that animals can fall in love as we do. So, if you’re not convinced by the sweet love scene from “Lady and the Tramp”, just wait until you read this. You’ll believe, too.

Every single day, her dog would stare out of the window. Kacy, or Reddit user “kacyyy”, began noticing the strange behavior in her dog. That’s when it all began. She noticed that he was staring at something very specific. It wasn’t his usual watch-traffic-kind-of-stare. Was it a person or a thing? What could possibly be keeping her dog’s attention for such a long time? – Kacy had no idea. It was hard to tell since Kacy wasn’t at home all the time to see what was so captivating to her dog.

Kacy was running errands most of the time, and busy going back and forth to work. Kacy decided to stay home on her day off from work to figure out what it was that her dog was obsessing over. At first, she thought it was a squirrel, or maybe even a family of squirrels. But there weren’t any squirrels around. Kacy was determined to finally solve the mystery.

While she watched television, Kacy noticed that her dog was staring into the neighbor’s window, and the neighbor’s cat was sitting in plain sight. Could this be what the dog had been staring at the entire time? Kacy observed her dog quietly. The cat was sitting at the window and seemed to be staring right back at her dog. This went on for two hours. Kacy, looking over at the neighbor’s window, saw that the cat was now curled in a ball and sleeping. The dog continued to stare. This was getting weird. Her dog didn’t even like cats.

Most people believe that dogs and cats come from two completely different worlds, but they’re not as different as you might think. They actually even have a few things in common. Despite what most think, they can get along quite well as they share some of the same personality traits. Rumors that say dogs and cats can’t be friends couldn’t be further from the truth. Do you find that hard to believe? –well, you haven’t seen anything yet.

Kacy wanted to know if her dog was getting attention from the cat in return, so she continued to observe. Then she noticed that the cat was sitting up and staring right back at her dog. She watched the two animals for days, smiling when she realized that they would stare at each other for hours on end. Was her imagination getting the best of her? Or was the connection she seeing real? She had to find out. Then Kacy did something that most people wouldn’t have done.

Kacy became so used to the sight of her dog staring out the window at her neighbor’s cat that one day she walked down the stairs and realized immediately that something was off. Her dog wasn’t at the window but was instead lying on the floor. Maybe her dog was sick. Kacy, looking at her dog’s food bowl, noticed that it was still full and untouched. She decided to wait a day or two to see if her dog’s unusual behavior persisted. That’s when her dog lost it totally.

Off To The Vet

Kacy took her dog to the vet, and when she mentioned how the dog had been staring out the window at the cat for many weeks the vet just laughed. He then asked the usual questions about diet, activity, and changes in sleep. He was in great shape and up to date on all of his shots. Nothing appeared to be wrong with him, but Kacy’s dog had been acting out in ways that she’d never seen before. Her dog was usually high-spirited, but he continued to lie on the floor and look very depressed. There seemed to be nothing wrong with him… until they got home.

The dog immediately rushed back to his usual spot on the floor when they got home from the vet, and he hadn’t even bothered to look out the window. Of course, something had changed! Kacy took one look and noticed something very different. Numerous potted plants had been placed in the window, blocking the view so her dog couldn’t see his friend anymore. Why hadn’t she noticed that before?! So Kacy came up with a plan to solve her dog’s depression, once and for all.

Nothing Kacy did seemed like it would help. She played with him, took him for as many walks as she could, and even bought him new toys. She tried many things to break the sadness in her dog, but nothing seemed to work. He continued to mope and wouldn’t respond to Kacy at all – even though he would take treats. Kacy had finally had enough. She had run out of options, but she knew that she still had one thing she hadn’t tried. It seemed crazy, but she did it anyway.

A lot of people would just have thrown in the towel, but Kacy wasn’t like most people. Kacy saw how happy the cat made her dog, and as a self-proclaimed animal-lover, she knew she had to try anything to make her dog happy again. She took a chance and reached out to her neighbor about the cat, and she hoped it would work. It seemed a little insane, but what the man did then for her dog and for true love will be sure to have you smiling!

Kacy really didn’t even know her neighbor very well, but she hoped that he would be understanding. It was worth the try. She wrote a note to her neighbor, describing the events she had witnessed over the past few weeks. She then asked the neighbor to kindly remove the plants so her dog wouldn’t be sad anymore. She taped the note to her neighbor’s window, and she had no idea how the neighbor would respond. She never expected a response as strange as the one she got…

Kacy, waiting for a reply to her note from the neighbor, had no idea what to expect. She really hoped that her neighbor didn’t think she was certifiably crazy, and even though she loved her dog very much, she had to live with the neighbor for a long time. She didn’t want to be known as “that weird girl with the dog”. Kacy received a reply the next day, the neighbor hadn’t waited long to reply. She couldn’t believe the way her neighbor had reacted!

Her neighbor quickly responded to Kacy’s note. He was more than happy to remove the plants, and he did so immediately. He agreed with her that that love was more important than household plants. But was the love the animals shared real? They would soon find out. Would the dog and the cat continue to stare at each other through the window, or would the time they lost cause them to lose interest?

Kacy, pleased to find her dog’s good spirits had returned, was happy to find that the furry friends took right to their old daily routine. Now, both owners look forward to seeing their pets at the windows every day. They both know now of their pets’ long-distance relationship. Cats and dogs are capable of much more than just friendship, as it turns out. In fact, they have definitely taught us humans a thing (or two) about love.

An example of these unlikely partnerships is the one between Kodi, a burly Alaskan Malamute, and Myshkin, a grey and black kitten. A solid bond was formed with a lot of persistence and a little enthusiasm. Myshkin was only a 10-week-old kitten when Kodi took the kitty under his wing. The kitten was even allowed to claw on him, making herself at home on his massive coat. Kodi put up with the kitten, even when she was using his fur as a scratching post. Myshkin never left his side when Kodi became sick with cancer, and would even protect her friend from stray dogs. Courage and dedication was the hallmark of this friendship until the very end.

Ruth the cat and Idgie the dog are an unstoppable duo with a fierce bond. Named after the famous friendship in Fried Green Tomatoes, these two were found abandoned together. Idgie and Ruth are now living the good life and share a cozy home together, however, Idgie was her Ruth’s fierce bodyguard while they were on the street.

Their story may not be the most cheerful one, but it is the most touching. It proves that even after death, the friendships forged between a cat and a dog can run very deep. Scout the cat and Charlie the dog had a bond like no other. They did absolutely everything together. When Charlie passed away, Scout never could go back to his old self. The poor cat couldn’t sleep unless he was curled up next to a computer that was playing old videos of Charlie.

Although it would have made an even better story if Kacy and her neighbor had fallen madly in love while connecting over the love their pets, it wouldn’t have been the type of story that Tom Hanks would have starred in on the big screen. This is not to say that the pets’ love story wouldn’t have made a great movie, though. I mean, who wouldn’t love an animal love story? And who doesn’t love love?

What Do You Think?

Are you one of those people who doesn’t believe that animals can fall in love? I’m sure that this story made you think twice about that, especially if you have a furry friend. Make sure that you share this story with the animal lovers in your life, even if your friends don’t believe you. We could all use a little more love in our lives, especially with the state that the world is in right now. We especially need a love story that is more than it seems on the surface!
Must Read
Early Human Migration To The Americas Now Linked To Climate Change
Can Science Bring Back The Dodo Bird? One Lab Thinks It Can
Human Geneticists Finally Apologize For Horrific Past Experiments On Humans