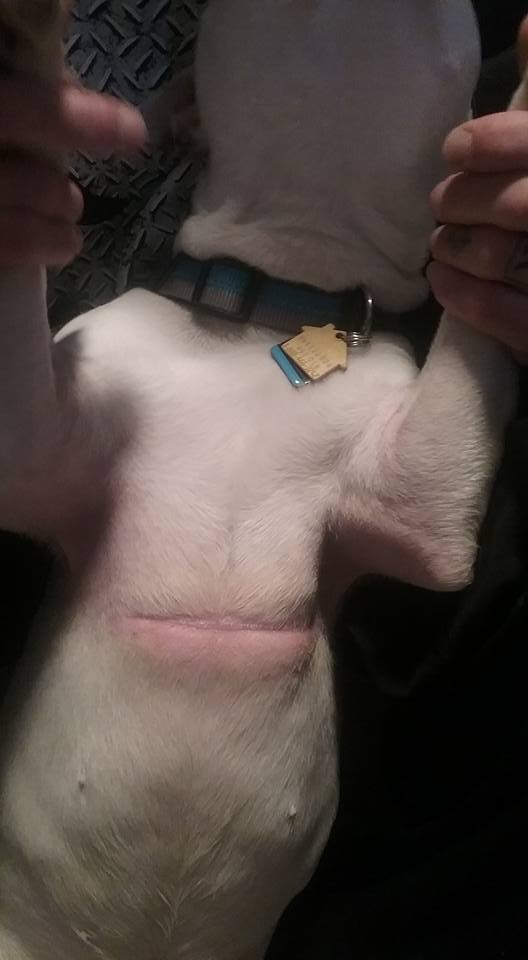 Kelly Benzel was delighted when she arrived home with the newest member of the family. After searching for months, she finally found the perfect dog to adopt. Without a doubt, their household was going to adore him. He was still shy but once they showed him some love, she was sure he would open up. But as she loaded him into the car, she got a sick feeling in her stomach. Something was wrong. Later, she called the police.

Kelly was always an animal lover. Ever since she was a child, she dreamed of having a house full of dogs! Once she settled and found herself a stable job, she adopted Brewer. But after a while, she wanted another to keep him company. She believed that buying purebreds was overrated. There were so many animals in need of adoption, so why not look there first? One white pit bull mix called Rocco caught her eye. Without a doubt, this was the dog for her. She made sure to do everything in her power to bring him home.

Surprisingly, Kelly didn’t even have to visit a kennel to find Rocco. Instead, she found him on Facebook, where he was being offered to a good home for $50. Kelly never managed to find his owner as the ad was posted by a roommate. She couldn’t stop thinking about him. So, after a few hours, she commented, showing her interest in the animal. Then, she sent a direct message to arrange a pickup date. Soon, that day arrived.

When Kelly finally laid her eyes on Rocco, she was immediately captivated. He was the most gentle and sweet dog she had ever met. She quickly loaded him into her car before anyone could change their mind. She was daydreaming about their future together when she suddenly snapped back to reality. There was a foul odor in her car. She opened her window and took a deep breath. Then, she realized the smell was coming from Rocco. Something wasn’t right.

Smelly dogs are common. From bad breath to lack of hygiene, Kelly had seen it all. Maybe Rocco’s parents didn’t bother to wash him. Maybe he ate something that upset his stomach? She had heard of dog’s paws giving off a yeasty odor but that was due to natural bacteria. Maybe Kelly was overthinking. But she couldn’t shake the feeling that something was very wrong.

Kelly had no choice but to pull over. The smell was making her gag. She went to the passenger side to inspect Rocco. Everything looked fine. She stroked his head and then removed the harness. He cried and shied away. What was going on? Then, she noticed the source.

Kelly’s hands fell as she took a step back. Rocco had a long, open gash across his chest. The seller had the hardness placed perfectly to conceal the wound. The cut was about 6 inches long and 1.5 inches deep. She now knew why there was such a rancid smell coming from him. Without a doubt, the wound was infected. She needed to get to a vet straight away.

Thankfully, the vet provided some good news. Rocco had a deep infection, but it was treatable with strong antibiotics. But it was obvious that he was in great pain. She also prescribed painkillers and then explained that they would need to surgically close the wound once the infection had passed. Kelly wiped the tears from her cheek. She was happy that her new companion was going to be okay. But she feared the answer to the vet’s questions. How did sustain such an injury? Why wasn’t it taken care of sooner? And who responsible?

The vet insisted on doing a full examination on Rocco. Turns out, the harness had cut into Rocco’s body. Many owners use harnesses to walk their dogs. But when left on constantly, without adjusting as they grow, they can embed in their skin. Kelly was heartbroken. But anger began to grow deep within. She grabbed her phone to call the woman she had met earlier that day.

When Kelly ran the woman, she was surprised. And when she informed her of Rocco’s injury, she began to stutter. “We’ll pay for the medical bills!” Kelly wasn’t falling for it. “So you knew this entire time?” She couldn’t hide her disgust. The woman continued to offer bribes before Kelly hung up. Their actions were appalling. She immediately called the police. Animal abuse was a real crime with definite repercussions.

Rocco’s previous owners knew what was coming their way. To Kelly’s shock, they tried to feign ignorance of Rocco’s injury. They claimed they had never noticed Rocco’s wound. They insisted the harness was for safety purposes when walking the poor animal. But the police didn’t buy it, and neither did the court.

Rocco’s previous roommates failed to fool the court. They were charged with the mistreatment of animals and were fined a hefty $1,500. Although Kelly spent weeks nursing Rocco back to good health, she didn’t mind. She wanted them to pay for their horrendous neglect. Thankfully, Rocco was now far away from them and living with those who truly loved him.

Rocco knew he was in a loving home. His shy demeanor quickly faded once he met the family. Now, Kelly can’t imagine being without him. “I have never felt this strong of a bond or this much love from any living thing,” she later shared. Although Rocco was now safe, he was still sick and weak. His wounds were far from healed, but Kelly was there to make sure he would get back to good health.

Kelly was informed that it would take nearly two months until the infect had totally passed. Then, once they were happy with the progress, they would close the would. Until then, Kelly had to be his nurse, constantly changing his bandages, inspecting him for signs of relapse, and providing some much-needed cuddles. She knew Rocco was in pain, but he never once took it out on his new family. He sat quietly as Kelly did her duties. Thankfully, all her hard work wasn’t for nothing.

Eventually, Rocco was deemed healthy enough for surgery. All the pain and heartbreak was worth the healthy results. Now, a year after the ordeal, Rocco is enjoying his life with his new family. And although he is happy and gentle, he still has the scar to remind Kelly of his troubling past. But to her surprise, not one part of his personality suggests his tough beginning. Kelly has always been thankful for Rocco, even through the hard times. Since then, she’s become a voice for animals who can’t speak for themselves, continuing to ensure the fair treatment of all animals!
Must Read
Human Geneticists Finally Apologize For Horrific Past Experiments On Humans
The World Is Now 90 Seconds To Midnight
New Study Suggests Teacher Evaluations May Perpetuate Academia's Gender Biases