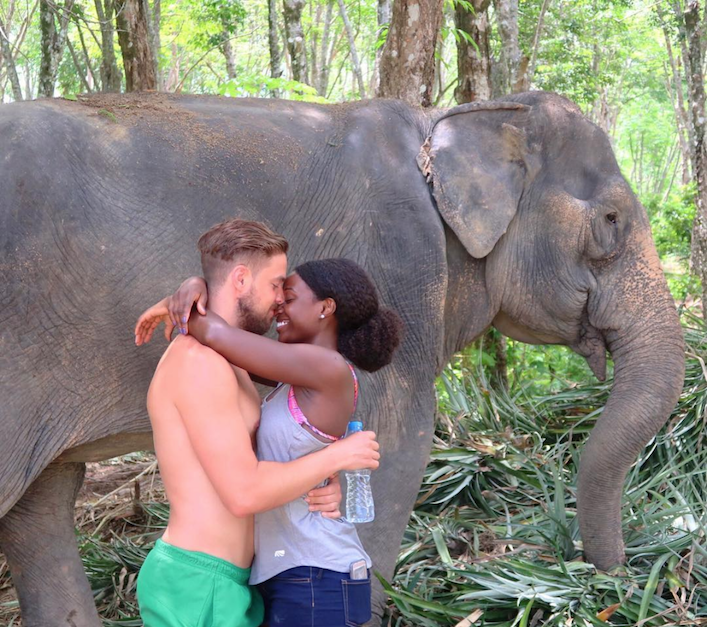 They were always getting likes on their pictures. Friends and family and even some strangers would always leave a comment. They were popular. But one picture was different. It became a massive hit overnight, and not just by their close friends. Magazine and news websites picked up their pictures to share them with the world. What was so special about this photo? Why was everyone talking about it? Then, when they checked the comments, it all made sense.

Wendy Joseph and Dan Hennessey weren’t always social media stars. A few years ago, they were hardly known on campus and were happy with the few close friends they had. But in 2006, when they were both studying in college, their profiles began to kick off. At the time, they hadn’t even heard of one another! But fate had plans for these two.

Dan was an 18-year-old sophomore when he discovered Facebook. He was following his love of the outdoors by studying exercise science. At the time, Wendy was a year younger and fresh out of high school, hoping to pursue a career in public healthcare. Dan was one of the original Facebook users back when the platform was only used by college students. The relationship status option made Facebook the perfect dating site for those looking to meet new people. Dan was young, spontaneous, and loved going to parties. He soon became obsessed with the site.

Dan wasn’t particularly looking for a relationship. Facebook gave him the opportunity to meet new people, expand his social circle, and have loads of new experiences. Then, he stumbled across a girl named Daphne. They had plenty of mutual friends, so he decided to send her a message. Unfortunately, she didn’t’ reply. So, he did a bit of stalking through her friends’ list. That was when he clicked onto Wendy’s profile. He was immediately captivated by her beauty. A chancer at heart, he sent her a message. Wendy was new to Facebook and was wary of its users. Before replying, she consulted Daphne about her next possible steps. But Daphne had some information to share about Dan.

Like any true friend, Daphne told Wendy that Dan had also messaged her. Wendy wasn’t going to be a fool for any man chasing multiple women. She ignored his message and went on with her life but a few weeks later, he sent her a follow-up message. Wendy had to admit that he was persistent. She checked out his profile and discovered that they had mutual high school friends. What harm would it be to reply? Dan couldn’t believe his luck. After a few hours of chatting, he was sure he wanted to meet her in person. But he was certain she would never meet a strange man for the first time alone, so he invited her to a party. But there was one obvious problem—he didn’t know of anyone throwing a party that weekend. He thought of a quick solution.

Dan went ahead and invited all of his friends to his apartment that Saturday night. “Bring drinks, snacks, and everyone you know,” he told them. Surprisingly, he managed to pull it out of the bag, and his home was full of fun, happy students by the time Wendy showed up. The pair immediately connected. Between the loudmouths and drunken cheers, they managed to chat throughout the night. And while everyone else left, Wendy stayed to help tidy up. She felt a chemistry with Dan. But that feeling didn’t ensure smooth sailing in the future.

Wendy had just ended her first long-term relationship and wasn’t eager to jump into another so soon. Dan was enjoying the party lifestyle with his friends. Understandably, the two agreed to stay pals. For six months they managed to keep all romantic feeling at bay, but when they refused to subside, they decided to take their friendship to the next level. So, over the last seven years, the two have been inseparable, They supported one another to get to graduation, moved in together, and became the power-couple in their group of friends. But throughout those seven years, Wendy had worries. Who were they without one another? So together, they made a heartbreaking decision.

Wendy wanted to discover who she was as an individual. But that meant leaving Dan. Though hurt and upset, Dan understood where Wendy was coming from. They had been together so long, they both missed out on solo experiences. So, they went their separate ways. Wendy started her own YouTube channel, posting beauty and hair tutorials. It soon became her passion, but she couldn’t shake her feelings for Dan. Eventually, she reached out to him and rekindled their relationship. They were stronger than ever before, sure of their fate to be together. But they didn’t expect their decision to lead to so much attention.

Understandably, Wendy wanted to share her life with her subscribers, and that meant convincing Dan to appear in some of her videos. After a flood of requests, they began posting relationship advice and their journey as a couple. Dan also branched out from his Facebook days and joined Instagram, where he shared pictures of their life together. His followers quickly grew to over 25,000, but that was nothing compared to Wendy’s 105,000. In December of last year, the pair celebrated 10 wonderful years together. They never thought this milestone anniversary would gain so much attention.

What better way to share how much they’ve grown and changed over the last 10 years than by posting a throwback. Wendy shared a side-by-side, then and now picture on her Instagram. On the left, they were mere teenagers unsure of their future together. On the right, they were fully grown adults, positive of their love for one another. And although “throwback Thursday” was a common hashtag, Wendy’s post went viral, gaining over 60,000 likes in just over a week. The Independent, The Sun, and The Daily Mail all took a major interest in their romance. But why so?

People became focused on Dan and Wendy’s looks. The majority agreed that they looked younger now than they did ten years ago! “Do you both age reverse?” One user asked. “What fountain of youth are you drinking from?” Pryed another. They were shocked by the reactions. They both noticed their bodies change for the better in the last few years, but they had a secret to their transformation.

Dan always focused on a fit and healthy lifestyle. Wendy was also conscious of treating her body well internally for it to impact her for the better externally. With Dan’s decision to pursue a career in fitness, it’s no surprise that they wanted to continue a healthy lifestyle together. They shared their couple workouts on Wendy’s YouTube, along with their fitness regime and nutrition advice. Although they both loved making content for their viewers, they had their eyes on a bigger prize.

Dan and Wendy always wanted to create a business. Together, they did just that by founding “True4You Fitness,” where they coach and personally train their clients. They went on to create a second YouTube channel where they focused primarily on health and fitness, while every now and again answering some heavily requested relationship advice. And in 2016, they made a life-changing announcement to their followers.

Dan has always been a true romantic. In 2016, he arranged a holiday for the two to Paris with some close friends. And when they finally arrived at the Eiffel Tower, Dan got down on one knee to propose. Wendy couldn’t contain her shock or delight as their friends captured the entire things on camera! Immediately, she said yes, offering the wrong hand for Dan to place the sparkling diamond on. As if the moment wasn’t heartwarming enough, they had more magical news to share.

Dan and Wendy weren’t ready to put an end to their adventures just yet. The two worked hard and saved over the last few years in order to live their dreams together. They dropped everything, grabbed their camera, and jetted off to Thailand, Costa Rica, Panama, Colombia, and many more locations. Now back in the United States, they’re focusing on their business and wedding plans. These real-life Benjamin Buttons have finally reached their dreams! Would you like to live a life like Wendy and Dan’s?