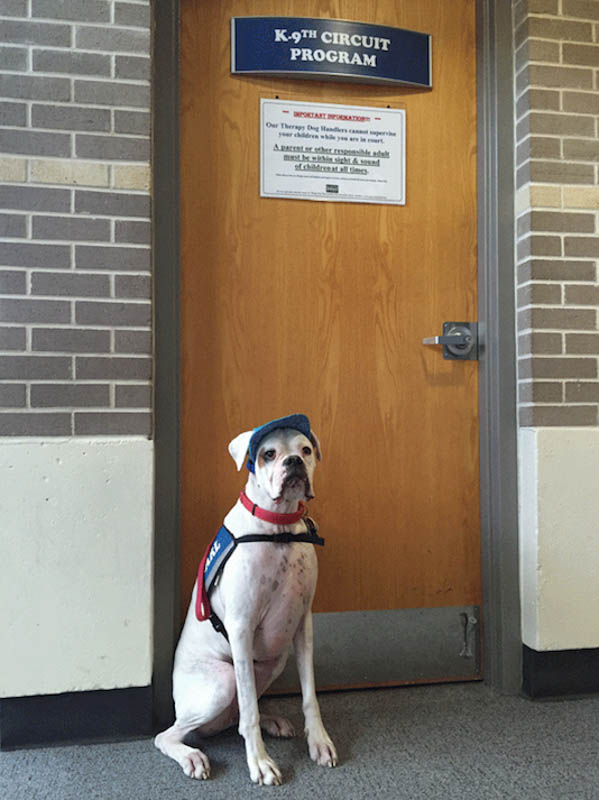 Every Dog Has Its Day

Adult things can be overwhelming for a child, and people have often struggled to take the stand in court to testify against someone who has wronged them. You can Imagine how ghastly this feeling would be to a child. A little girl took to the stand to testify against a man who had wronged her. Everything inside her refused to take the stand, so as soon as she saw him, she froze. Then, she signed something to her dog.

Karl, a 65-pound boxer, wasn’t your everyday dog. He was a working dog. His job was to serve and protect, but no, he wasn’t a police dog. Nevertheless, he was a hero to one little girl. This is where these special pups come in: sometimes, children needed support while taking the stand, and these dogs would appear in court. Karl was a special K9-circuit dog, but he had an advantage over the rest of his unit.

Karl was unlike any other canine is his unit. He was born deaf, and Believe it or not, this would actually serve him well throughout his life. The gavel banging, sobs from people and general buzz can set a dog off, and the other dogs had to undergo training to not react to the sounds of the courtroom. Karl’s hearing impairment had made him unaware of the noises surrounding him, luckily. But this also had an effect on his job.

Karl was an instant hit with kids because he was an incredibly laid-back dog. This was due to him not being able to hear. He was floppy enough to make them feel calm but big enough to make them feel protected. Karl wore a blue cap to court every day, to boot. His relatable and goofy appearance put all children at ease… especially the one little girl who needed his help. His lack of hearing, however, did pose one problem though.

Training Karl was a little harder than other dogs as a deaf dog needs special instruction. Eye contact is crucial since a command cannot be heard. This poses a problem: Imagine attempting to train an excitable puppy who cannot hear you. When they run amok, Instead of just yelling “heel,” you would need to capture their attention fully. But one day Karl wowed all his trainers when he started to do something different.

Kar had successfully learned to understand signing, and this just goes to show how amazingly intelligent he was. Karl had been trained to use American Sign Language to communicate. All the trainers were amazed as he quickly understood the commands signed to him. Now understanding his trainer’s wishes, he had begun to excel. He started to become a magnificent candidate. However, this new-found communication posed a new obstacle.

Unlike the other courtroom dogs who could be controlled by voice command, Karl needed signs. There was an issue in Karl’s communication system that presented itself when interacting with children—the hand signals to summon and control Karl had to be learned by the little kids. It soon became apparent that Jittery nerves and a whole new language didn’t go well together. Children loved Karl, but they could not communicate. Then Karl’s trainers did something incredible.

The Rise Of Karl

Karl’s trainers started putting together a simple and easy-to-learn routine of hand signals. This was easily picked up by kids and they could now communicate with Karl. Only they and Karl could understand the special language. Karl took the courtroom by storm and brought relief to multiple children. But there was one little girl whom Karl would help immensely. One particular child stood out.

Weary Of The World

One little girl took to Karl like a duck to water and was enthralled by his ability to sign. Undergoing a difficult case, to say the least, she had to do something even more difficult. A man had wronged her severely in her past, and this had left her wary of the world. Now she had to face the man once more in court. But Karl did something remarkable for her, and with one sign, he changed her life forever.

The little girl appeared to be ready after having arduously prepped for her court date, however, she was overwhelmed as soon as she entered the courtroom. The worst happened when it was time for her to take the stand. The little girl absolutely froze up. How she would be able to face that awful man once more? But then, remembering something, she quickly signed to Karl. That was the sign that changed her life forever.

The little girl had signed for Karl to come and sit by her, and at that moment, Karl rose. His presence calmed her, and she felt protected by his big, muscular build. And with Karl’s support, she had begun to testify. All of her prepping had come back to her and she grew from strength to strength as she continued, and amazingly, she made it through the entire process without a hitch. And what of the court case’s outcome?

The little girl testified successfully, thanks to Karl, and as a result, the man was locked up. He was never able to hurt her again… What a victory! And it was all due to one deaf dog. Karl made the world of difference to the little girl, and now she no longer needed to worry about that man. Her little life was free from trouble. One soppy pup had given her the confidence she needed, and Karl’s story grew quickly.

From actual news coverage to posts on social media, the story of Karl has been seen by millions. Karl made his mark on society and as a result, the K9th Circuit Program received a lot of attention. Thankful for Karl’s exposure, the trainers of these silent courtroom heroes, especially Karl’s trainer, Joanna, couldn’t be happier. Now more children knew that they had the support of a warm fluffy protector on the witness stand.

“We’ll be there as long as the child wants Karl to stay in their life. He’s helped a lot of children…” trainer Joanne shared in a recent interview. After the trial, Karl does not just disappear from a child’s life, and he doesn’t only give support in the courtroom. Scheduled visits with Karl are arranged Instead of leaving children to deal with the aftermath of court on their own. This helps them to heal after their ordeals.

Unbeknownst to Karl, he is a hero for so many children, and he simply carries on, continuing to serve and protect. This unknowing hero just soldiers on, day after day, but a large number of children will never have to worry again thanks to Karl. He and the rest of the dogs in the K9th Unit have made a world of difference to little lives on a daily basis. America thanks you, Karl, even though you’ll never know it. But Carl couldn’t stay in the little girl’s life forever.
Must Read
Three Indigenous Tribes In The United States Will Get $75 Million For Relocation Due To Climate Change
A New Supercomputer Simulation Animates An Incredibly Accurate Look At Universal Evolution
Genome Studies Manage To Find A New Branch Of Fungal Evolution