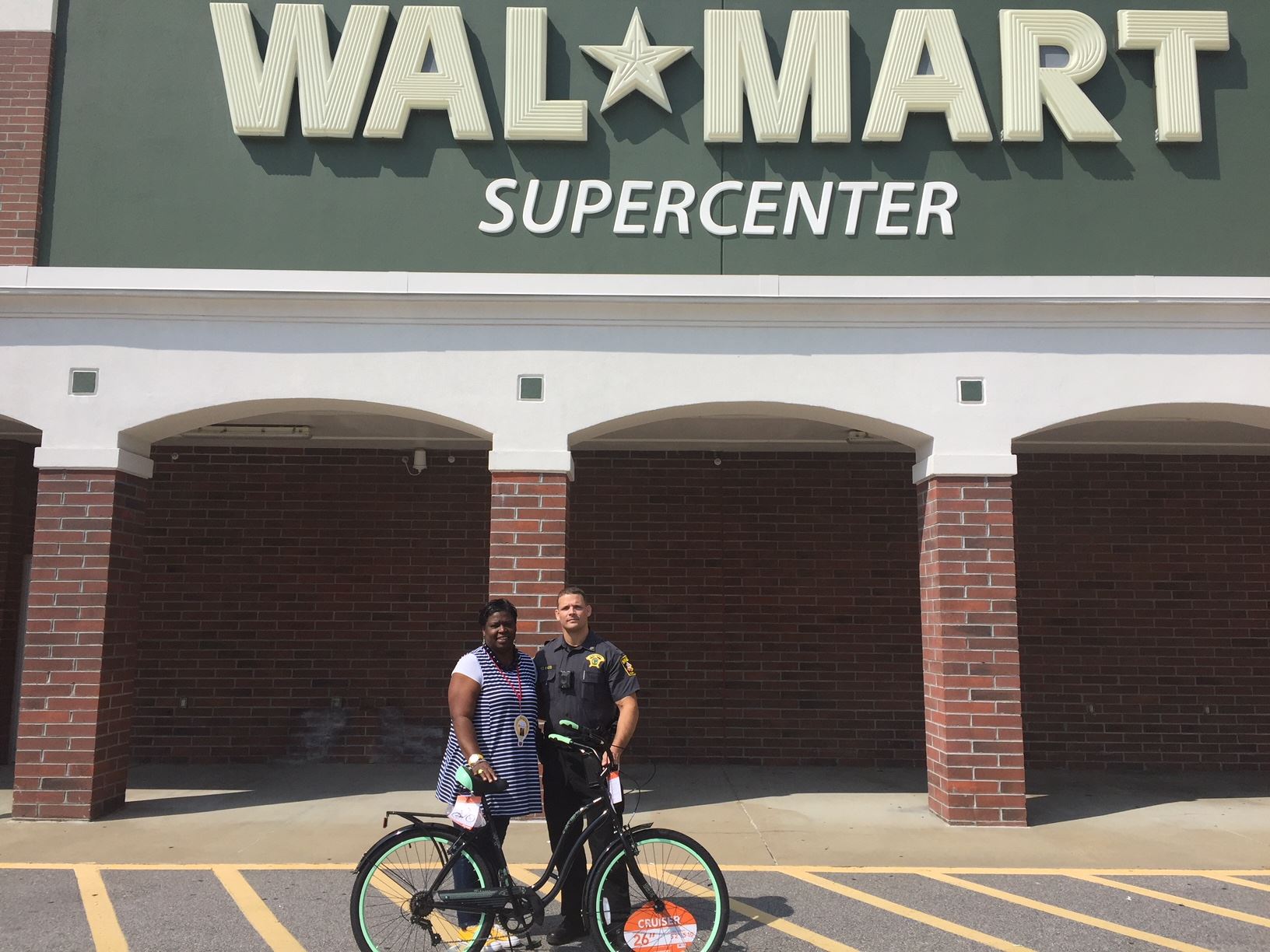 She saw the car in her peripheral vision and she quickened her pace, trying to ignore the vehicle that was slowly sidling up to the curb next to her. There was nowhere to run, so she put her head down and continued walking. Please… not today. She pleaded in her mind, But the car continued to slow beside her. Then the driver honked his horn, and then she saw the telltale blue and red lights of a cop car.

Sgt. Scott Bass from the Nash County Sheriff’s Office was driving along in his cruiser when he noticed a familiar figure appear on the road ahead. He was passing the Stone Gate Mobile Home Community, and he had hoped to find her there. He had some business with her today, and he wasn’t going to take “no” for an answer.

Walking In The Rain

Jaylesya Corbett was making her was to Bojangles. It was raining hard, and she had tried to open her umbrella, only for it to be whipped out of her hands by the freezing wind. She had a long way to go yet, but she plodded on through the torrents of water, stepping carefully over the pools that swirled and conspired to break her footing. The last thing she wanted was for the cop to stop her today.

Jaylesya was tiring. Her feet were wet and aching, and even though she had been careful to wear her most comfortable pair of sneakers, she could feel her blisters starting to rub raw. Every day she fought her way through the cold to reach Bojangles, and then made the long trip back home. It was a total of 12 miles on foot, and, her family depended on it. Until one day, when the cop stopped her. Then everything changed.

He slowly pulled up alongside her, rolled down his window, and beckoned for her to come closer. There was nowhere to run, so she couldn’t ignore him any longer. She feared the worst, and her head started to spin. She was in trouble, and she knew it. There was no getting out of this… the day had finally come.

She walked over to the cruiser and noted with fear that it had “Sherriff, Nash County” emblazoned on its side. Gingerly, she approached the driver’s window and braced herself for what the cop had to say. She heard the words entering her brain, but she couldn’t quite grasp what Sgt. Scott Bass was saying. Then the words slowly assembled themselves into meaning, and her eyes widened with disbelief.

Sgt. Scott Bass asked her to please get into the vehicle, and that she shouldn’t be on the street. In a flood of stuttering and panic, she tried to explain to him that her livelihood depended on her getting to Bojangles, but he didn’t seem to be listening. Well, she was in the vehicle now, she thought, and she wasn’t about to argue with the law. Her fate now rested entirely in his hands.

Where Was He Taking Her?

She sat in silence, wondering where he was taking her. She entwined her fingers and placed them over her chest, protectively, and then let them fall into her lap with a sigh. Appearing nervous wasn’t going to help anything. Was he taking her in for questioning? She glanced at him shiftily, but he continued to drive through the rain, his eyes on the road ahead.

She was not comfortable with this situation. After all, This man had just ordered her into his car and she had stupidly complied. She should have run, she thought. Even if he was a cop, could she trust him? and where was he taking her? Her mind raced with possibilities. Then, in the headlights, she saw the sign looming through the downpour. He had taken her to her workplace, Bojangles.

While he was commuting to the Sherriff’s Office of Nash County, Sgt. Scott Bass had noticed that Jaylesya was wearing a Bojangles uniform, and had realized with dismay that she had been making the 12-mile journey on foot to her work every day. That’s when he decided to give her a lift. Nobody, he thought, should have to walk in such bad weather. But his kindness wasn’t about to end there.

Sgt. Scott Bass continued to give Jaylesya lifts to work whenever the weather turned bitter and whenever she would allow it. It normally took her two hours to walk to Bojangles, and two hours to walk back home each day, so she welcomed the gesture. Sgt Bass was impressed with her perseverance and determined to do more. He hastily contacted the local Walmart to see if they could help. Then he did something that would change her life forever.

Jaylesya waited in anticipation. Sgt. Bass had said that he wanted to meet with her, and she was nervous. She thought that she was about to be reprimanded by the Sgt, although she hadn’t the faintest idea what she had done. As she wondered, she saw him. He called her over, and she didn’t know what was about to happen. Then, he pulled something large from his car and presented it to her proudly. It was a brand-new Schwinn Fairhaven Women’s Cruiser bicycle.

“I wanted to help Jaylesya because she walks six miles to work every day regardless of the temperature, rain or shine, stands on her feet during her entire shift and walks six miles under the same conditions back to her home — and that is truly admirable. I’ve had the opportunity to get to know her and wanted somehow to lessen her burden of that 12-mile walk,” Sgt Bass recalled later.

The video, posted by CBS 17 on Youtube, has since gained over 6000 views and hundreds of comments in just a few weeks. The post that the Nash County Sheriff’s Office posted on Facebook in commemoration of Sgt. Scott Bass’ kindness has also been extremely well-received by the community. They are proud to have such a generous member and are always ready to step up for people in need.

“I was shocked,” Jaylesya said of the incredible gift, “I didn’t think it was real,” She is extremely grateful that she doesn’t have to make the arduous-mile journey on foot anymore, thanks to the kindness of one man who was determined to help the people in his community. Would you have done the same?
Must Read
Genome Studies Manage To Find A New Branch Of Fungal Evolution
European Space Agency Budget Increases By 10 Billion For The Next 3 Years
Artemis 1 Finally Launches: What It Means For Space Travel And Exploration