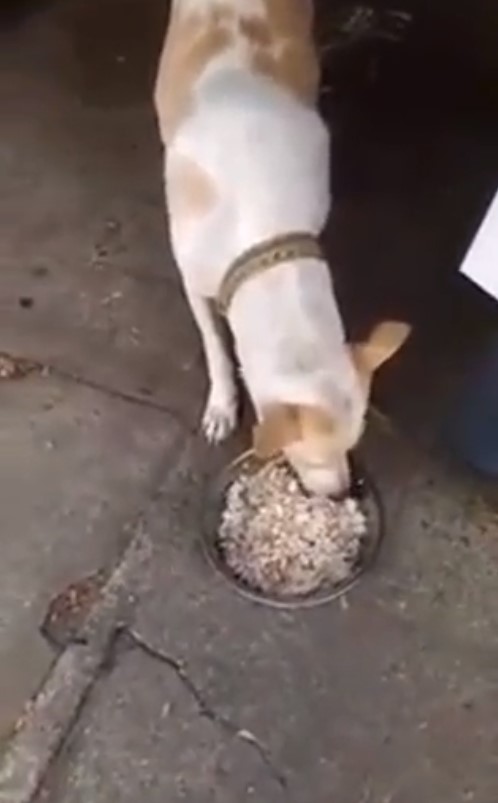 Something Dangling From His Mouth

She carefully spooned the rice into the tin bowls. She had prepared it that morning, and it was still steaming. The dogs started to edge forward, crowding around her. A furrow of worry started to form on her forehead. Where was Tua Plu today? She started to panic, and her eyes darted to the outer ring of encroaching stray dogs. Then, she saw him and was startled by what was dangling from his mouth.

Every day Orawan Kaewla-iat had the same routine. She would cook rice for the stray dogs in the area where she lived, in Krabi, Thailand. She was living at the housing for the City Police for now but would be moving soon. She was worried about who would take care of the dogs when she was gone, and she was especially worried for Tua Plu. Tua Plu was no ordinary dog.

Orawan had developed a soft spot for one dog in particular, and she had named him Tua Plu, which translates to “winged bean”. She had given him the name because of his happy-go-lucky nature, and his endearing temperament. Every day he and his mother would patiently wait for their turn to be fed, and then he did something extraordinary that would imprint on her heart forever.

Orawan carefully slipped the collar over Tua Plu’s head. She had to make sure he would be safe. In Thailand, dogs who were not wearing collars would be captured and taken to be euthanized. Orawan had always had an affinity for animals, and the thought of the hungry strays drove her to feed and care for as many as she could. It was a hard life for a street dog.

Every day more and more stray dogs would arrive, jostling and hungry. Some of them had been abandoned by their owners, and some were truly feral and had been born on the streets. People were touched when they saw Orawan’s kindness, but some people in the town were unhappy that Orawan was feeding them, and they regarded the stray dogs as vermin.

A Collar For Tua Plu

By putting a collar on Tua Plu, Orawan hoped the people would let him be, and he would not be reported and taken to the pound. She also hoped that if he had identification he would be less likely to fall prey to any kind of animal cruelty. There are people who did not care for dogs as she did.

One day, Tua Plu and his mother were nowhere to be seen as Orawan did her daily feeding rounds. She feared the worst. Anything could have happened to him on the street in the night, where he had nobody to care for him. She waited and waited, but still, they did not arrive. It was unusual for them to miss feeding time, and she became more and more concerned.

She started to search the streets nearby, hoping to find something, any trace of the two stray dogs. She went from door to door and asked the locals if they had seen her “winged bean” and his mother. She described them in detail, from their cream coats to their facial markings, and still, nobody was able to tell her where they were.

After searching fruitlessly, Orawan circled back to the place where she always fed the dogs, hoping that Tua Plu and his mother had arrived while she was away. There was still no sign of them, and her heart grew heavy. Then, in the distance, she saw the cream-colored creature she had grown to love so much. As he approached, with his tail wagging, she saw what he was carrying in his mouth.

Tua Plu approached Orawan slowly. His tail was wagging so hard that it made his little body sway from side to side, and he had a gift that he was holding carefully in his mouth. He dropped it in front of the bowl of rice that she had dished up for him and waited tentatively.

Orawan inspected the wet green offering with apprehension. Then she realized that he was waiting for her approval. He had brought her a leaf as a token of appreciation for the bowl of rice, and he wouldn’t tuck in until she had accepted it. He understood the concept of “exchange”, and she was incredibly touched by his gesture.

Leaves and Pieces Of Paper

Since then, Tua Plu has brought “gifts” for Orawan in exchange for his daily bowl of food. “When he’s hungry, he will offer something to get fed. Every day he shows up with an object in his mouth — usually a leaf and sometimes a piece of paper. Before you feed other dogs, you have to feed Tua Plu and his mom,” Orawan explained.

Due to the video that Orawan Orawan Kaewla-iat posted on Facebook of Tua Plu bringing her gifts of gratitude for feeding him, people all over the world have fallen in love with the little dog. People have even come forward wanting to adopt him, so she no longer fears that there will be nobody to take care of him when she moves.

The video of the little dog has gone viral not just in Thailand, but all around the world, reaching over 3 million views. The intelligence and gratitude that Tua Plu shows with his gifts has astounded everyone who witnesses it, and he and his mother will undoubtedly have “furever” homes in the near future.

The video of the little “winged bean” has also highlighted the plight of stray dogs everywhere, and inspires people to help animals in need in their own hometowns. The gratitude of the little pup is evident, as he continues to bring Orawan little gifts daily. Would you consider helping an animal in need next time you see one?
Must Read
Three Indigenous Tribes In The United States Will Get $75 Million For Relocation Due To Climate Change
A New Supercomputer Simulation Animates An Incredibly Accurate Look At Universal Evolution
Genome Studies Manage To Find A New Branch Of Fungal Evolution