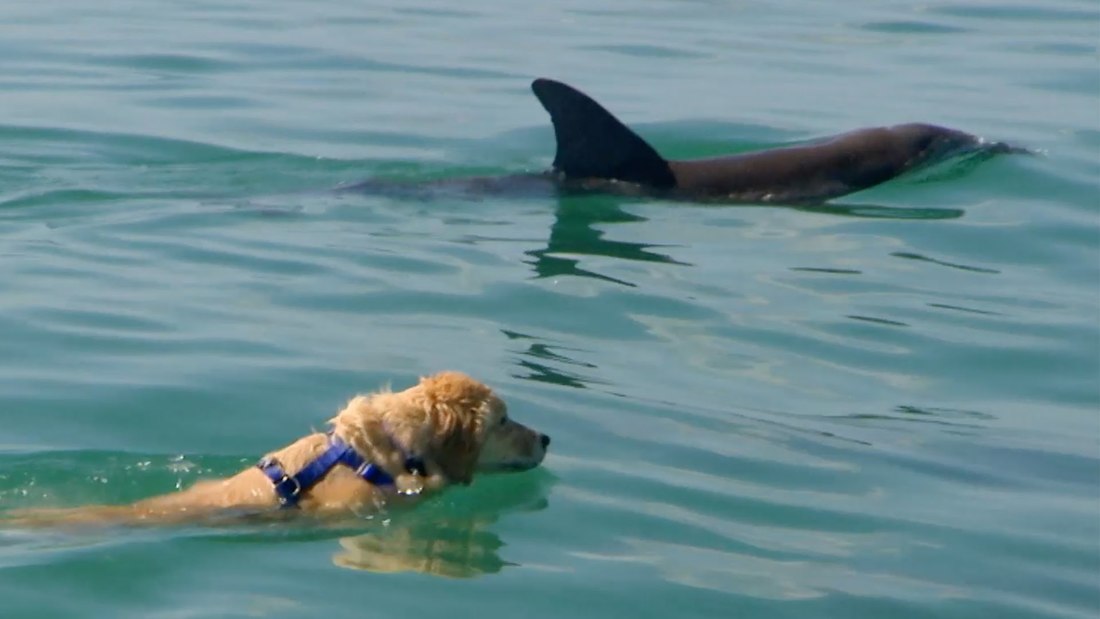 Pat Doohan gazed on, helplessly. There were onlookers on the pier exclaiming excitedly and pointing at a dark shadow moving in the water. The dog had taken a running jump into the harbor, and he hadn’t moved fast enough to stop him. He watched the dog with a feeling of dread as he peddled his legs faster.

Ben, the golden Labrador is a resident of Tory island, 16km off the north-west Donegal coast. His owner, Pat Doohan, a local hotelier, tries to keep him contained, but to no avail. Ben’s favorite pastime in the world is to frolic on the beach and swim in the cool waves. Pat is increasingly aware of the danger as an unexpected visitor starts to frequent the harbor.

A Body On The Shore

The lifeless body of a bottlenose dolphin washed up onto shore at the same time another animal was spotted in the harbor. Tourists and locals alike gathered almost daily to watch the dark fin cut the surface of the slate-colored waves. The watery creature seemed to have become a permanent resident of the Tory Island harbor.

Not A Puppy Anymore

Ben the Labrador’s favorite pastime was becoming increasingly dangerous, and Pat, as well as the locals, were becoming concerned with his safety. Ben wasn’t a young dog anymore, and the tide and currents in the ocean were tiring his legs more easily than ever before. Although he was a strong swimmer, he didn’t seem to know his limitations. One day the danger was evident for all to see.

A Yellow Speck In The Harbor

When Ben tore across the beach and launched himself into the ocean that day, he was acting like a rambunctious puppy. He swam out further than usual, and he began to visibly tire. He slowed as he tried to fight the ebb and flow of the undercurrent. Pat watched in worry, trying to search for the yellow speck that was his dog in the enormous harbor.

“Ben!” Pat yelled with relief as he spotted his dog’s yellow head appear again from beneath the choppy grey waves. He seemed to be gaining traction against the current and was using the tide to push himself back to the safety of the shore. A crowd had gathered on the opposite side of the harbor, and now they started waving frantically. They had a better vantage point to see what was gliding in Ben’s wake.

The dark shadow was visible just beneath the surface of the water, and it started its effortless trajectory towards Ben the Labrador. Ben was swimming powerfully now, with each pump of his doggy legs creating a white splash of froth in the water. But he was weakening with each stroke, and he was no match for an animal designed for hunting its prey in the waves. Pat saw it, and froze.

Ben got one last surge of energy to make it back to shore. The people on the beach were screaming words of encouragement, trying to egg him on for the final push. He was too far out for them to get to him in time. With nostrils flaring and legs pumping furiously, Ben understood that it was do-or-die.

Ben’s last effort seemed to be paying off and he had managed to swim back past the breaker line, however, that was only his first battle. Pat could now see the threat behind him clearly without the waves obscuring his view, but he didn’t like what he saw. There was a dark fin emerging menacingly just a few yards behind his dog.

As the dark fin rose and cut through the surface of the water, the crowd that had gathered on shore shrieked in disbelief. They saw what the animal was doing, and their fear turned into amazement. It was apparent that the animal was pushing Ben with its nose from underneath, and helping him to shore.

Ben’s legs were failing him, but he had help. A bottlenose dolphin had sensed his peril and had taken it upon itself to guide the dog to safety. Bottlenose dolphins are amazingly empathetic animals and have been documented time and time again engaging in just this behavior. This lonely dolphin had been circling the harbor, mourning the loss of its mate.

It turned out that Ben knew the dolphin well, and he let out a snuffle of happiness and relief as he reached the beach with his good friend. Locals told Pat that he had been going out to the harbor to rollick with his unlikely companion in the waves every day, and this wasn’t the first time he had reached his depth. The town’s inhabitants even had a name for the dolphin: Duggie.

Waiting For His Friend

Ben is so excited to see his dolphin friend that he waits for him to appear in the harbor every day at around the same time. He will wait for him on a grassy embankment, and then his ears will prick up and he will carefully search for Duggie from a distance. When he sees him, he runs at full speed towards the beach, and plunges into the water, with tail wagging and yelps of excitement all the while.

Games In The Water

“They’ll be out there swimming around and the dolphin will come up behind Ben and get a fix on the direction he is going…” Pad said later in an interview, “Then she’ll pop up on the other side. It is just wonderful to watch. They seem to be having great sport.” Locals and tourists are enthralled with the unlikely pair’s antics.

Ben the dog and Duggie the dolphin have delighted people with their heartwarming story since 2006. Onlookers have speculated that Duggie has found a true companion when he lost his partner, and although he can sometimes be seen swimming with a passing pod of other dolphins, he always returns to his best friend who waits for him in the harbor.
Must Read
European Space Agency Budget Increases By 10 Billion For The Next 3 Years
Artemis 1 Finally Launches: What It Means For Space Travel And Exploration
Clam Species Presumed Extinct For 40,000 Years Has Been Found Alive