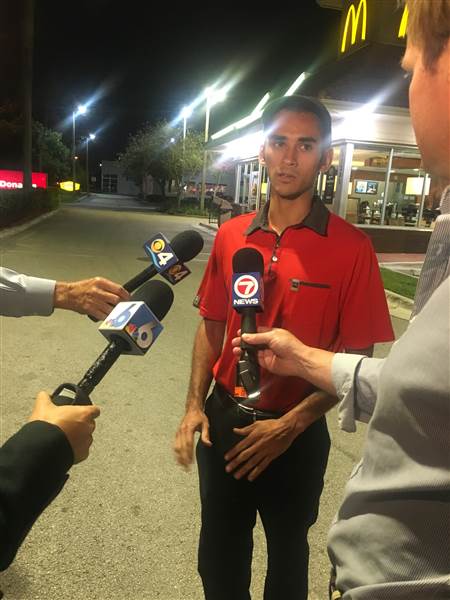 It’s not every day you get the chance to have a grave impact on someone’s life. Pedro’s day started like any other—taking orders and filling drinks. Before he knew it, he was in his rhythm, running to and from the kitchen, fetching coffee, and maneuvering between his co-workers. He never thought his regular day would have an extraordinary impact.

“That’s $15.35 in total, please,” Pedro said into his mic. The cars honked to usher on the line. Hangry—hungry and angry. He was working long enough to know that they were impatient. He capped the cups and packed the bags, making sure to place the boxes at the bottom and the fries on top. No one liked soggy fries. He opened the window to greet the next customer. Then, he heard children screaming.

Pedro Viloria wasn’t sure what he was destined for in life. He watched his mother work two jobs, laboring for sixty hours a week to support him and his four younger siblings. She was putting away whatever she could to help him towards college, but he felt guilty. He was proud of his good grades. And although he wasn’t smart or athletic enough to get a full scholarship, he knew he could get into most schools if he had the tuition fee. After graduation, he gave his mother some shocking news.

Pedro’s mother had sacrificed enough for him. She functioned on four hours sleep a night, worked 10 hours, 6 days a week, but would always be there to wake them with a hot breakfast in the morning, and greet them with a healthy dinner between jobs. If anyone needed a break, it was her, not him. “I’m getting a job,” he said over dinner. She gave out to him for a full hour before finally throwing her bag over her shoulder and storming out. That was the easy part done. Now, the hard part.

Pedro had never worked a full day in his life. Not because he didn’t want to but because his mother wouldn’t allow it. The only “work” she accepted was mowing their neighbour’s lawn every Sunday or painting their fences over the Summer. She wanted him to focus on his studies, to “build a decent life for himself.” But who would he be if he sacrificed hers for his own benefit? She could never support their family and help him. But finding a job was harder than he expected.

Experience—baby-sitting, painting, and gardening. Qualifications—none. Hobbies—reading and watching television. His CV wasn’t shining, but his attitude was. He marched around Doral, Florida in a freshly ironed white shirt. The briefcase he had borrowed from his neighbor bounced off his hip as he walked down the main street, in and out of every door. “We’ll be in touch,” they all said through closed, stiff smiles. Things were looking bleak.

Pedro had picked up doing more chores for the older families in the neighborhood—washing dished, cleaning carpets, walking dogs—anything to earn him a few dollars. After his first week of random jobs, he decided to treat his siblings to a day out. “Don’t waste your money,” his mother scolded. But Pedro was stubborn, insisting on her to join them on her only day off during the week. They never expected that day to have such an impact a few days later.

After two rounds of bowling, and a whole lot of gutter balls, Pedro brought his family to Mc Donald’s for “happy meals” and ice-cream. It was there, during yet another of his mother’s lectures that he noticed a “help wanted” sign. He dropped in his details the next day and waited patiently. They could guarantee hours and pay was more than minimum wage. He never thought he would become such a valued employee.

Pedro impressed management immediately with his positive attitude. He was offered the job immediately and began training the following day. Cash register systems, change, milkshake machines, headsets, orders, packing—he struggled to find a flow. Thankfully, his team was patient and caring. Most importantly, they knew his situation and wanted to help him out as much as possible. None of them expected him to help out this stranger in need.

Pedro was getting used to the 5 AM shifts. He would put his siblings to bed while their mother was at work before hitting the hay himself. He was happy knowing that his family wouldn’t have to go without in order for him to receive a higher education. Every order he took, every person he served, every floor he moped put him one dollar closer to achieving his goals. Morning rush-hour was in full swing when a family pulled up to his window. Then, he noticed the female driver.

“Mother, mother! Stop it! Mother, what are you doing?” The two young children screamed from the back seat. Pedro waited for the car to halt at the window. Instead, it continued to creep forward. Their mother’s eyes were closed and all their efforts to wake her up were useless. Pedro placed their order on the counter, grabbed the side of the winder, and jumped.

Pedro managed to reach the car, open the passenger door, and stop the vehicle before any harm came to the family. Turns out, the mother lost consciousness just after ordering breakfast for her kids. The children continued to scream for their mother as her eyes remained shut. “Hello?” Pedro asked again and again. Then, he remembered who was sitting down for their breakfast.

Pedro had already noticed a few regular faces for breakfast, two of which were firefighters. And thankfully, a paramedic had just walked in after finishing her shift when he called for help. Together, they managed to remove the woman from the vehicle and stabilize her before she was taken to the hospital. “In that moment, I thought, ‘I’d rather save that woman’s life,’” he explained.

The woman turned out to be an off-duty police officer. She arrived at the hospital in safe but critical condition. And thanks to Pedro, she’s on the mend. “Basically, I thought something was going wrong,” he shared after noticing her “trying to breathe.” Pedro never expected such a surprise start to his Tuesday morning. And Mc Donald’s had their own opinion on the incident.

“He is an excellent employee, so it didn’t surprise me that he took immediate action to jump through a window to help save this woman,” a McDonald’s spokesperson shared. “Their quick thinking and action were everything in that moment.” Pedro was certainly praised by his teammates and customers that day. His job description never included jumping out of windows to save customers, but he made it part of his job.

“I think I speak for our McDonald’s family when I say how proud we are of Pedro,” the spokesperson gushed. But Pedro’s biggest fan? His mother and siblings. To her delight, Pedro has started looking into the possibilities of becoming a paramedic. Thanks to his quick thinking and gut feeling, Pedro managed to save this family from sure harm. “I saved an officer’s life? I can’t believe this.” Let’s hope he puts those skills to good use!
Must Read
Genome Studies Manage To Find A New Branch Of Fungal Evolution
European Space Agency Budget Increases By 10 Billion For The Next 3 Years
Artemis 1 Finally Launches: What It Means For Space Travel And Exploration