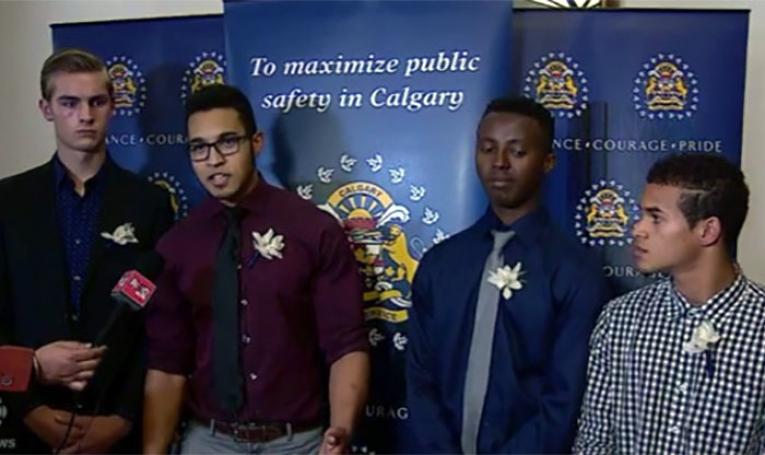 When we interact with people we rarely want to think the worst of them, but sometimes -like with 4 young heroes- that skepticism can pay off.

It was just another night at the impromptu skate park. Four teenagers practiced their tricks in an underground parking garage, having a great time. It was getting late, though, and the four Canadian boys would soon need to be heading home. They were stopped, however, by a suspicious sight in the underground of Calgary.

Not so Normal Anymore

A clearly upset fifteen-year-old girl and a much older, well-dressed man were making their way through the parking garage. The man was quite forceful with the disorderly teenager, carrying her through the car park. That alone wasn’t quite enough to arouse suspicion until they noticed something else about the girl.

According to one of the skateboarders, “She was screaming and yelling,” Carsyn Wright said, “She just wanted to be out of there. She was all scuffed up and dirty.” That, in itself, is enough to arouse suspicion. The four teenagers turned their attention to the man for an explanation. What was up, dude?

The man explained to the concerned boys that he was her father. Assuming maybe he’d found her drinking at too early an age or something similar, the boys backed off. The woman didn’t ask for help nor did she contradict the man’s words, so they let it go, for then. Something didn’t feel right though.

It was getting late that night in Calgary, and the boys would need to head home. Packing up their skateboards and reservations, they started heading back. It was easier to believe the man. After all, the girl hadn’t disproved his words. There was still something about it though that just seemed fishy in the scenario.

The scenario, to the teens exiting the underground parking lot, just didn’t seem right. Were they sure the two knew each other? The girl had seemed awfully resistant and dirty. What were they doing in the parking lot so late? Probably trying to find the man’s car. The boys fought with themselves over it.

No Way it Could Be Real

The boys admitted that they weren’t convinced, but Wright said, “You don’t want to really think of the worst in somebody like that. You don’t want that situation to be real, so you just brush it off and hope for the best.” Even this, however, would not sway their troubled consciences.

They simply had to return to the scene, just to make sure everything was alright. They arrived back at the Calgary underground parking lot swiftly, and it didn’t take the four boys working together long to figure out where the pair had gone. When they found them though, they were disgusted.

The four boys were disgusted and frozen by what the man was doing to her. Arnaud Nimenya, one of the boys, admitted that he, “didn’t know what to do.” It didn’t take the four long to snap out of it, however, and they tried to separate the two. The man, of course, wasn’t too happy with them.

The man, thwarted, tried to leave the situation altogether, wash his hands of it. Nimenya remarked as they followed him, “He pushed me aggressively out of the way, kinda like just gives me the smile, like, ‘I can do this. You can’t do anything about it.” And that wasn’t his last aggression.

The boys didn’t let the man get away easy. While one stayed behind to take care of the intoxicated girl, the other three followed the man out of the parking lot and onto the streets of Calgary. That’s when the man decided to fight, using one of their skateboards as a bludgeon.

Before the man could do serious harm to the boys, the police got involved and hauled him away. After the three returned, they found the girl safe and sound with the last boy, and the four went home, not knowing just how grateful the city would be for their heroic efforts that evening.

The police chief, Chief Const. Roger Chaffin, tried to call the boys, wanting to thank them for what they’d done. Unfortunately, the boys misunderstood the calls- they thought they’d get in trouble for fighting the man. Eventually, the call went through, and the boys were pleasantly surprised with the contents.

The four boys were invited to attend the Chief’s Award Gala in recognition for their services to Calgary and to the young girl they’d saved. All four agreed that it’s what they hoped anyone would’ve done in the same situation. Next time, they’ll know to trust their instincts as much as their boards.
Must Read
Dog Refuses TO Give Birth, Then Vet Gives Owner News
Teen Disqualified Over Swimsuit Gets Last Laugh
His New House Was Hiding This In The Basement